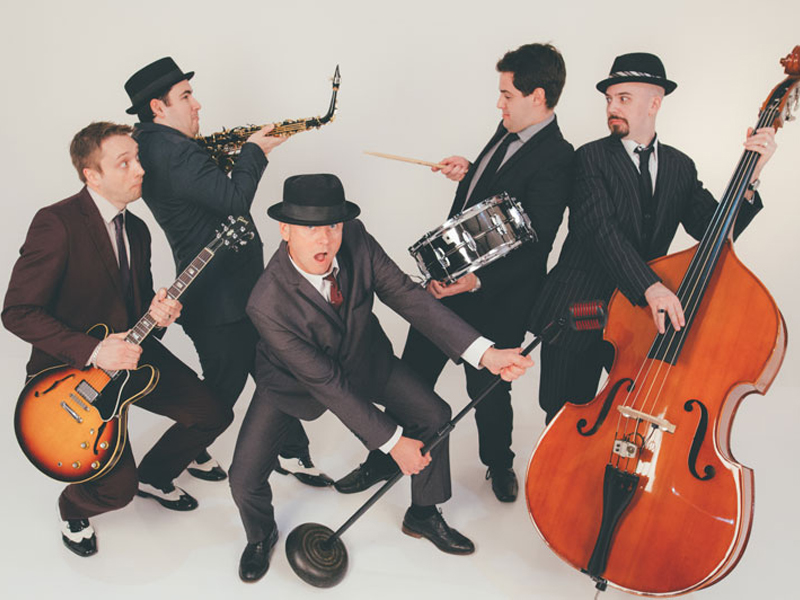 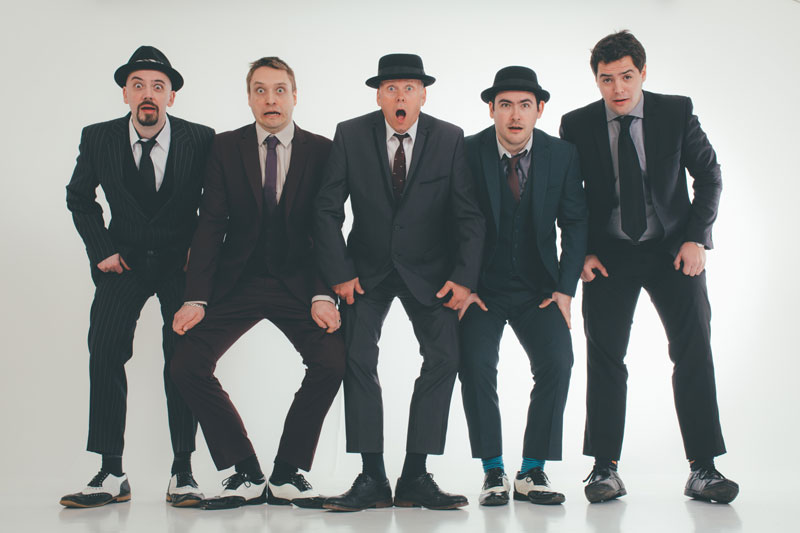 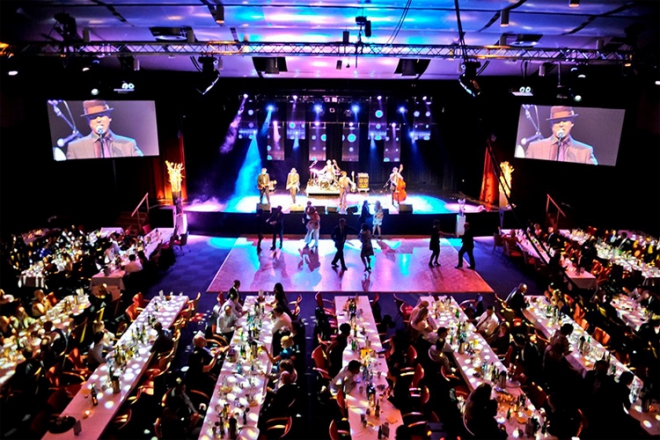 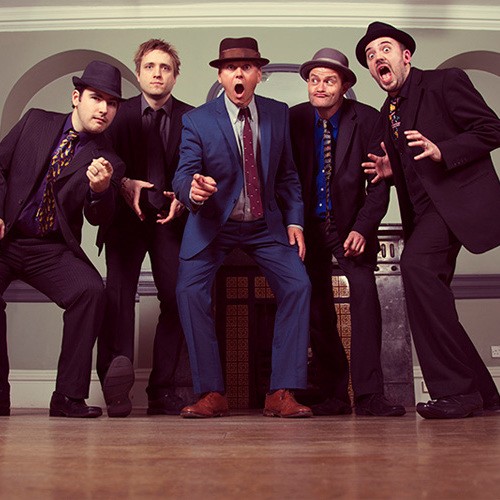 The band that were invited to perform at An Evening With Arnold Schwarzenegger hosted by Jonathan Ross, as well as playing at Kelly Brook's birthday party, The Swing Cats are a lively swing, jive and jump blues band guaranteed to get the party started!

“By far the best function band.”

By far the best function band.

“Wow,what a great bunch of guys . Professional group , excellent music. What the guys didn’t know was in fact, they were playing to a room full of musicians, all of which were completely blown away. A fun band , upbeat at all times a great 3 sets of swing,funk and soul. I now need to find another excuse to have them back!”

I would not hesitate in recommending them to anybody who is looking for a classi...

“I hired the Swing Cats for the evening entertainment at our wedding in June 2017, and they were absolutely fantastic! They were well presented, professional, and played two excellent sets of classic songs that our guests all thoroughly enjoyed. I would not hesitate in recommending them to anybody who is looking for a classic jive/rock'n'roll act - they're worth every penny!”

Fantastic!! Everyone loved them

“Thank you for all your help in booking the Swing Cats for us. They were fantastic!! Everyone loved them. Everyone there mentioned that is was great music. I would definitely hire them again!”

They were absolutely fabulous. Every song was a winner and the quality of musici...

“We booked the Swing Cats for a joint 50th/18th Birthday celebration. They were stunning. Professional, adaptable and reliable, they played two sets in our garden and never put a foot wrong. Our guests just had to dance – the music and their stage presence were irresistible. So many friends have commented on their performance. I would book them again like a shot, and would recommend them to anyone. ”

Swing Cats performed with such spirit and energy.

“I am writing to express my sincere gratitude for the fantastic job your band did in entertaining the guests at our recent Gala Dinner. Swing Cats performed with such spirit and energy and your music is both infectious and uplifting. As such, thank you for your contribution in making the event such a success. We have received extremely positive feedback from all those in attendance and we hope that the evening will provide a real boost to the recognition of this charity's important work. We raised over ?10,000 on the night- money that will directly help us to achieve our mission of negating the effects of landmines worldwide. On behalf of the Find A Better Way Board Of Trustees, I wish you well in your future endeavors and I hope I have the pleasure of watching your band perform again in the future.”

Most Alive Network artists travel UK wide and internationally. Get a guide price instantly by clicking the 'get quote' button and entering your event date and location. Make an enquiry and we will liase directly with The Swing Cats to confirm price, availability, and the provide you with a confirmed quote.

To learn a song request per song

Highlights
* 5 piece Jump Jive and Swing band with male vocals.
* Also play slow jazz standards, groovy funk, classic rock and roll and up-tempo ska tunes.
* An established group of experienced musicians celebrating songs that infuse cheeky good humour with a driving musical energy.
*Sharp on-stage presentation and performances ensure that they never fail to liven up any event.
* Performed at many high-profile celebrity events such as An Evening With Arnold Schwarzenegger hosted by Jonathan Ross, Kelly Brook's Birthday Party and Sir Bobby Charlton.
* Many years' experience of performing at weddings, corporate events, parties and festivals throughout UK and worldwide.
* Fully self-contained with top-quality professional PA system and lights as standard
* Very adept at not being overly-loud - ideal for many venues that have audio sound limiters and volume restrictions.
* Music provided between sets free of charge
* Available as smaller jazz band line-ups, ranging from 2 piece through to 5 piece.
* Available throughout the UK and internationally.

Formed from their passion of western swing jive and jump blues music and heavily influenced by Louis Jordan, Wynonie Harris and Bob Wills, The Swing Cats have performed their musical mix to weddings, festivals and corporate events and have been featured in live session on BBC Radio.

Notable performances include:
* An Evening with Arnold Schwarzenegger - a black tie event with Jonathan Ross interviewing. The Swing Cats were the chosen band to entertain the guests before and after the interview. (2014)
* Kelly Brook's birthday at her London club Steam & Rye. Kelly posted a subsequent message to the band on Twitter You guys were great!! Thank you so much x (2013)
* Sir Bobby Charlton at his Find A Better Way Charity Gala event, London (2014)
* The Royal Albert Hall, Ignite Season at Cafe Consort. (2013)
* Private corporate event held by Rolex, consisting of top professional golfers during the British Open (2011). Tom Watson, one of the worlds top golfing legends, subsequently approached the band to congratulate them on their performance.
* Society of Petroleum Engineers (SPE) BBQ Dinner and Dance, Stavanger, Norway. (2012 and 2013)
* St. James' Place Wealth Management Group (2014)
* Bond Street Association, Bond Street, London (2012)
* The Shard, (Tallest building in the E.U.) London Bridge, London (2011)
* The London Marathon, (playing along the main route) London (2011)
* The Centenary Pavilion at Leeds United Football Club (2014)
* InterContinental Hotel, Westminster, London (2013)
* Pfizer pharmaceutical company, Kent (2009)

The Swing Cats are a five-piece band from Kent that consist of Mark Churchward on vocals, harmonica and trumpet; Nick Browne on saxophone; Chris Cassar on bass; Nick Harrington on drums and Ben Green on guitar.

The Swing Cats have also released two full studio albums - Chicken Skin Swing containing 16 swing and jive tracks and Ride Daddy Ride containing a further 14 high-quality swing and jive songs. The highly-respected roots and country magazine Maverick Music reviewed the Chicken Skin Swing album as not only sublime but a professional and enjoyable experience. The review concludes by saying With this their sixteen track album which has no hint of amateur efforts about it whatsoever this band is one that as long as they keep gigging and playing material like this than stardom and further success will not be too far around the corner.

After booking, speak directly with The Swing Cats.