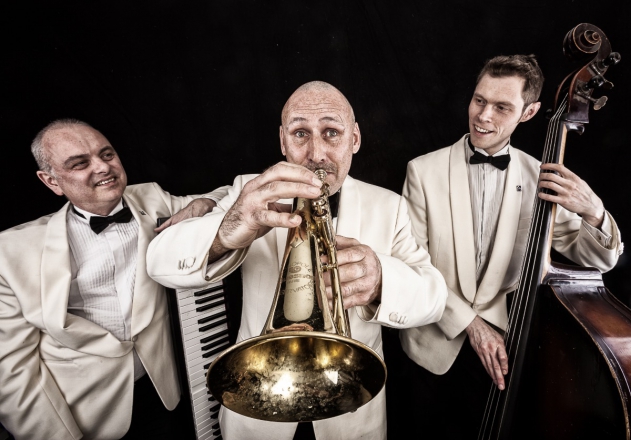 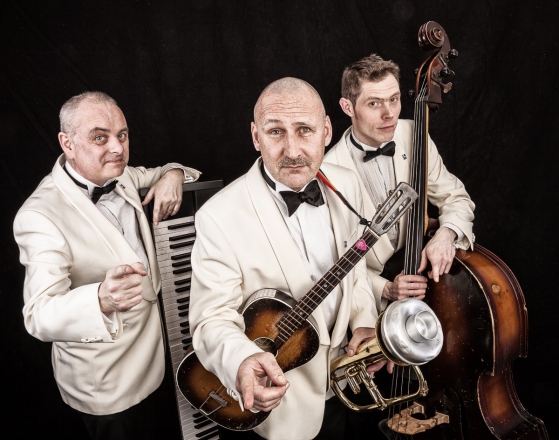 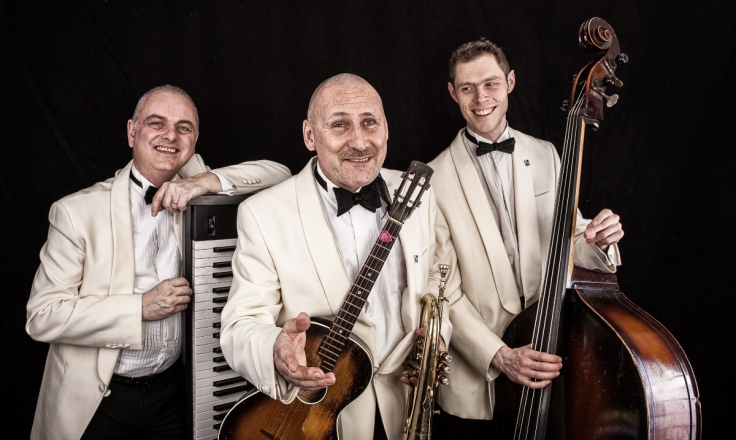 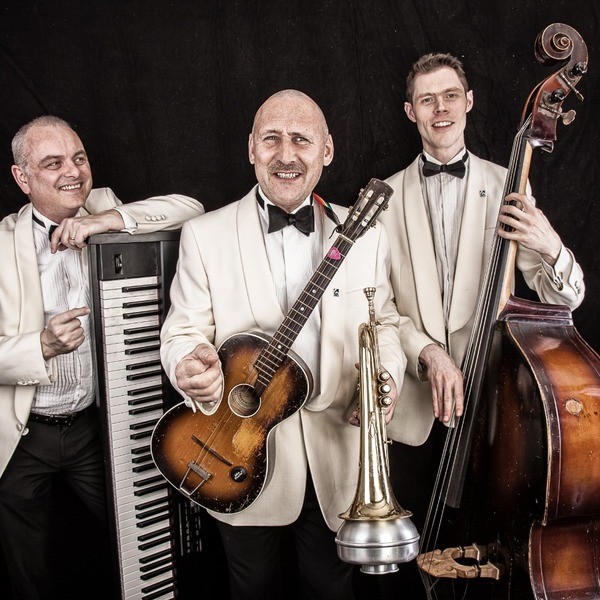 The Sinatra Three are here to get your party started with a swing! A smaller version of The Sinatra Swingers; great for a modest budget, an intimate party or a drinks reception. Celebrating the music and spirit of the greatest singer of the 20th century - Sinatra, and The Rat Pack, and their contemporaries.

“We had a wonderful evening with wonderful music.”

Standard Repertoire
Frank Sinatra
Fly Me to the Moon
Come Fly With Me
Witchcraft
I’ve Got You Under My Skin
You Make Me Feel So Young
Strangers in the Night
The Lady is a Tramp
Mac the Knife
Beyond the Sea
New York New York
My Way
Cheek to Cheek
The Way You Look Tonight
I Left My Heart in San Francisco
I Get a Kick Out of You
Makin’ Whoopee, Blue Skies
Begin The Beguine
Blue Moon
Brazil
Bye Bye Blackbird
The Continental
Something Stupid
All of Me
Almost Like Being in Love
Anything Goes
Bad Bad Leroy Brown
Are You Lonesome Tonight
As time Goes By
Don't Get Around Much Anymore
A Fine Romance
A Foggy day in London Town
I Only Have Eyes for You
Have You Met Miss Jones
It Had to be You
Let's Face the Music and Dance
Let's Do It Lt's fall in Love
It Happened in Monterey
Our Love is Here to Stay
Moonriver
The Nearness of You
A Nightingale Sang in Berkley Square
Oh Look at Me Now
Old Devil Moon
Night and Day
Pennies from Heaven
Polka Dots and Moonbeams
Satin Doll
Slow Boat to China
Stardust
Stompin' at the Savoy
Someone to Watch Over Me
Tea For Two
These Foolish Things
My Foolish Heart
Too Marvellous for Words
The Very Thought of You
Wrap Your Troubles in Dreams
Young at Heart
You're Getting to be a Habit With Me, You Must Have been a Beautiful Baby
...and more!

Bobby Darin
Mac the Knife
Beyond the Sea

Harry Connick Jnr
It Had to be You
Recipe for Love

Tony Bennett
I Left My Heart in San Francisco

And many many more!

“Booked for my Dad and Uncles 80th birthday. We had a wonderful evening with wonderful music. Everyone had a good dance and commented that they thoroughly enjoyed the band. Communication throughout the booking process was excellent from both the agency and Simon from the band, and they were very keen and more than happy to adjust their set to suit our needs (ie: including a Happy birthday song etc) I can highly recommend the Sinatra Three and wouldn’t hesitate to book them again.”

Perfect for our evening

We couldn’t have asked for more. We would be delighted to recommend you to our f...

“Thank you The Sinatra Three for making our wedding day exceptionally special. Your song selection, style and dress complemented our winter country wedding perfectly and it was a pleasure to have you there for our day. From learning our first dance song “Let’s Fall in Love” by Ella Fitzgerald to bringing the rest of the wedding party onto the dance floor straight after, we couldn’t have asked for more. We would be delighted to recommend you to our friends and family. Rose and Michael Rainsford”

They were great! Very nice and friendly.

“They were great! Guests really loved them. The band put on a lovely, committed performance. They were very nice and friendly, especially with liaising with us before the day to try to sort out the music for the first dance.”

Price from £833 + travel from Lancashire

Most Alive Network artists travel UK wide and internationally. Get a guide price instantly by clicking the 'get quote' button and entering your event date and location. Make an enquiry and we will liase directly with The Sinatra Three to confirm price, availability, and the provide you with a confirmed quote.

Not just another Frank Sinatra tribute band; The Sinatra Three are a 3 piece band performing an exuberant and, at times, irreverent celebration of the music and spirit of the greatest singer of the 20th century - Sinatra, and The Rat Pack, and their contemporaries.

Available for your drinks reception, party, wedding or corporate event; The Sinatra Three are professional and flexible, performing classics that are accessible and appealing to all ages.

The Sinatra Three play music from an era of Swing, Latin, Blues and Jump Jive; songs penned by the likes of Cole Porter, George Gershwin, and Irving Berlin, that were made famous by Sinatra and the Rat Pack.

This act is also available as a 5 Piece band: Please see The Sinatra Swingers' profile for more information.

References for The Sinatra Swingers:
"Thank-you for performing at Piccadilly Place, you all sounded great, you looked great and brought a real zing to everyone’s day. Thank-you!"
Events Manager, Carillion

"Simon was a really friendly guy who was very helpful and tried to go above and beyond to accommodate our needs!"
Hinkley Island Hotel, Leicester

After booking, speak directly with The Sinatra Three.