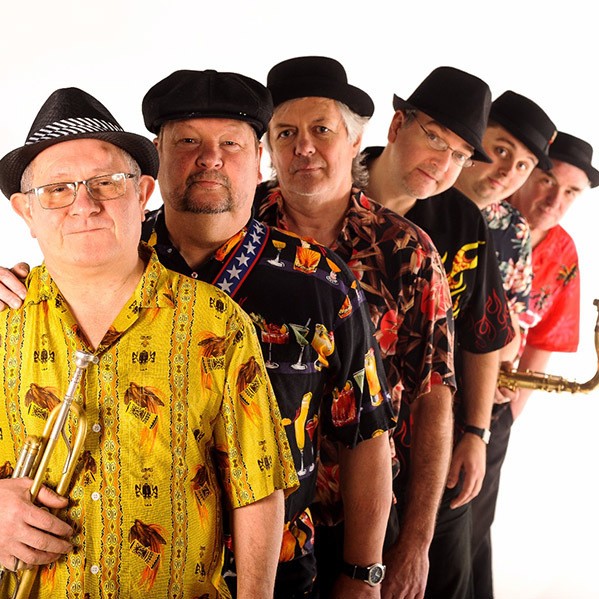 If dancing is your passion, then this is the band for you! Playing their own arrangements of the hit songs of the 40's and 50's, this five-piece band will keep the dance floor full all night.

If you are down, invite some friends and the The Jivestars and you will never lo...

“If you are down, invite some friends and the The Jivestars and you will never look back. This very sociable, professional and extremely entertaining band will leave the crowds begging for more. Keep up the brilliant work lads and best wishes for the future!”

New Years Eve!!!!!! Undoubtably one of the best nights we have ever had at the Q...

“New Years Eve!!!!!! Undoubtably one of the best nights we have ever had at the Queen's Head. The Jivestars were truly awesome! They really made the place jump and this superb band are capable of creating an amazing atmosphere no matter what the circumstances. Superb musicians with a wonderful stage presence.”

Thanks again for a brilliant night's entertainment - you have been the talk of t...

“Thanks again for a brilliant night's entertainment - you have been the talk of the town! (well... the conference)”

I just wanted to write and thank The Jivestars for being part of an excellent ev...

“I just wanted to write and thank The Jivestars for being part of an excellent evening at Anstey Hall a few weeks ago - your music was absolutely superb, and I'd have little hesitation in recommending you to anyone else looking for a swing band! I have received lots of very positive comments from the other guests (some along the lines of 'best band ever at a wedding') and I am unsure that my little toe is ever going to recover from dancing for a whole evening in new wedding shoes!!”

As a group, you arrived in plenty of time (always a big worry for promoters!), w...

“As a group, you arrived in plenty of time (always a big worry for promoters!), were very professional in all aspects of what you were doing and played 2 great sets for our dancers, which went down extremely well. In fact I understand that several of the dancers subsequently followed you to your Sunday booking quite some distance away, which is some testimony in itself. Also, on a personal touch, it was nice to see that you stayed on after you had finished playing and it wasn't a case of you all just itching to 'get away'. That was commented upon. Let me know when you're up this way again and we'll see about re-booking.”

Most Alive Network artists travel UK wide and internationally. Get a guide price instantly by clicking the 'get quote' button and entering your event date and location. Make an enquiry and we will liase directly with The Jivestars to confirm price, availability, and the provide you with a confirmed quote.

Highlights
* Lively enthusiastic and fun! A great Swing/Jive Band for any party
* Upbeat songs including Jump, Jive & Wail, See you later Alligator and Caldonia
* Lighting rig provided for a party atmosphere
* Requests considered for a nominal fee
* Music between sets can be provided
* Available throughout UK and Europe

The line-up of sax, trumpet, guitar, bass and drums allows the band to recreate the music that was all the rage in the 1940’s and 50’s and the current play list includes many of the hits that had audiences jumpin' and jivin' in those post-war years. Compositions by the jump jive greats, Louis Jordan, Cab Calloway and Louis Prima feature widely in the set along with more contemporary work by artists such as Brian Setzer and Big Bad Voodoo Daddy. It's all tied together with a light hearted, tongue in cheek delivery between numbers.

The Jivestars play a two hour show split into hour long sets during which the audience will be invited to join in on chorus lines and cajoled into dancing if they are not already strutting their stuff. Their trademark loud shirts might have ensured them a place on the Fashion Police's "Most Wanted" list, but their musical style has brought them friends and followers wherever they play

So if you’re looking for a tuxedo'd band to play nice quiet background music, sorry, move along, nothing to see here – but if you want to dance and party through the night then this is your band!

FAQ:
They provide their own PA system, which is adequate for a medium size hall ~250 people. A small lighting rig for the band is also standard.

If you are not booking a separate disco, you are welcome to play your Ipod/phone/CD decks into their PA system.

Performance:
2 x 60 minute sets is standard, 1 x 90 minute or other extended or irregular performances are possible, of course. They will do their best to fit in with your requirements.

After booking, speak directly with The Jivestars.