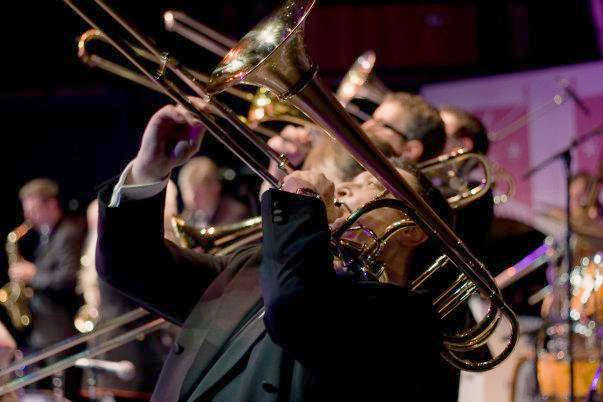 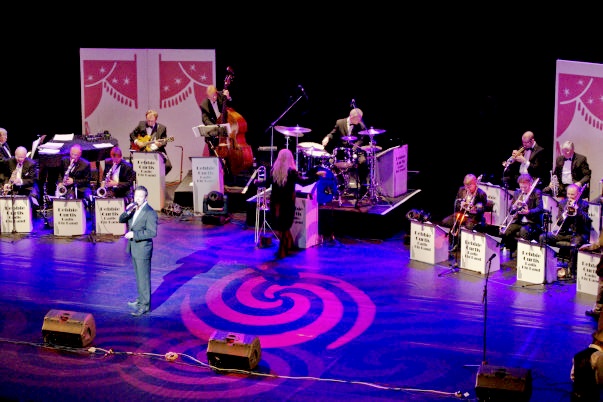 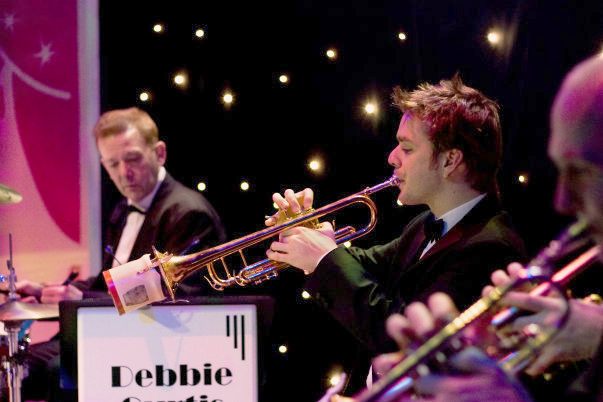 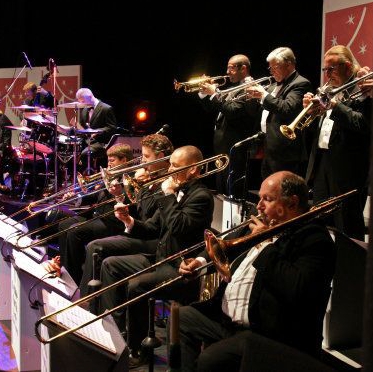 I
I CAN'T GET STARTED
IN BEAT
IL CRESCENDO
IVY
IMBOTE
IF I SHOULD FALL IN LOVE AGAIN
I'VE GOT YOU UNDER MY SKIN
I'VE GOT YOU UNDER MY SKIN (V)
I LEFT MY HEART IN SAN FRANCISCO
I GOT IT BAD (AND THAT AIN'T GOOD)
INTERLUDE
I'VE GOT MY LOVE TO KEEP ME WARM
I'LL STRING ALONG WITH YOU (YOU MAY NOT BE AN ANGEL. BUT)
I CAN'T STOP LOVING YOU
IN THE MOOD
IT'S TIME TO MOVE
INDIAN LOVE CALL

O
OPUS IN PASTELS
ONE TWO THREE, FOUR, JUMP
OLD DEVIL MOON
ONCE IN A WHILE
ORANGES & LEMONS

It was absolutely amazing. The atmosphere was electric and the audience was tota...

“It was absolutely amazing. The atmosphere was electric and the audience was totally wow'd. All walks of life were in the audience and everyone was blown away by the talent and professionalism in the whole big band that you have recreated. You managed to keep the whole thing glued together as MD brilliantly - the re-enactors kept the mood in the place it was meant to be and it was great watching all the jitter bug and jive dancing going on to exceptional live music. The evening made a whole lot of people very very happy! Bravo Debbie Curtis - BRAVO!! ”

We thoroughly enjoyed it, Glenn Miller's nephew was great... ...

“We thoroughly enjoyed it, Glenn Miller's nephew was great... ”

Better than any band I have ever seen! ...

“Better than any band I have ever seen! ”

I've been to hundreds of Big Band shows, this was the best I have ever seen, tha...

“I've been to hundreds of Big Band shows, this was the best I have ever seen, thank you for a fantastic evening of entertainment. ”

What a fantastic evening, we are all still talking about it. Debbie really makes...

“What a fantastic evening, we are all still talking about it. Debbie really makes the band swing and John Miller and Iain gave us all a vocal treat! The spiv was a hoot and straight from the forties - superb!!! can't wait till the next one ! ”

Price from £3,841 + travel from Buckinghamshire

Most Alive Network artists travel UK wide and internationally. Get a guide price instantly by clicking the 'get quote' button and entering your event date and location. Make an enquiry and we will liase directly with The DCR Big Band to confirm price, availability, and the provide you with a confirmed quote.

Highlights
* Top UK big band with female Musical Director
* Featuring John Miller nephew of Glenn Miller subject to availability
* Classic Jazz from Wartime and beyond
* Talented and accomplished 16 piece band
* Low rates in the South
* A truly unique show not to be missed!

Also available if required, as ‘Featured Vocalist’ is John Miller, nephew of the great Glenn Miller! John adds solo vocals as well as duets with Debbie. He is the only genuine Miller in the Big Band business today, other bands often quote the Miller name, but that is only the music; ‘John is a Miller’.

Debbie Curtis is unique! She is the UK’s only female professional Big Band leader. Fondly known as ‘The Mistress of Swing’, although more recently as ‘The Queen of Swing’, she is also an accomplished musician and singer. Born into the business, Debbie was brought up with the music she now performs; she knows its history, is passionate about it and has clearly inherited her late father’s conducting style.

Her 16 member band features only musicians who are at the top of their profession, household names from Big Band TV & Radio etc, thus ensuring the highest quality for your event. They have appeared with or alongside many of the biggest names in show business!

The DCR Big Band cover music from numerous eras especially the Big Band greats such as Miller, Basie, Kenton, Heath, Dorsey, Woody Herman etc as well as arrangements of more recent popular songs. If there is something special you want played at your event and it’s not in the library, then they will, where possible, arrange to acquire it especially for you.

For larger events, a concert can be turned into a show by adding Debbie’s very own ‘Hobsons Choice Dancers & Re-Enactors’ who can also be booked to appear to add stunning dance from the 40’s era as well as a ghostly glimpse into the past. The Re-Enactors can also provide ‘Meet & Greet’ for your event, including the ever popular ‘Viv The Spiv’ complete with his suitcase of Black Market Goods and watches up the arm! Go even further and add Vintage Vehicles to the atmosphere. The band has two vintage cars and a bus and can even provide wartime tanks if required!

They have various packages available to suit a wide range of budgets. They can appear purely as The DCR Big Band or with numerous other vocalists, featured musicians or International guest stars.

A recent PR campaign through National & Regional Newspapers, Magazines and Radio reached around 14 million people, an accomplishment that no other specialist Big Band has achieved for decades!

After booking, speak directly with The DCR Big Band.