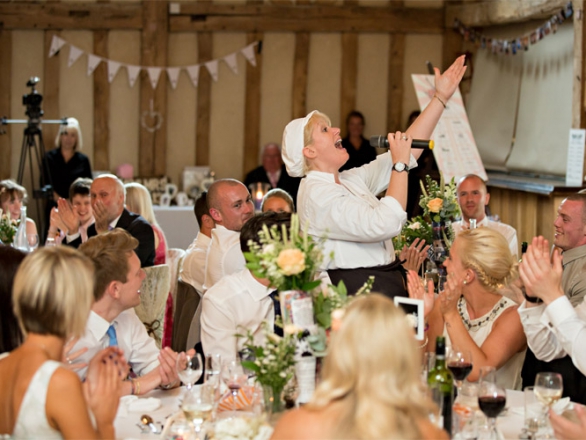 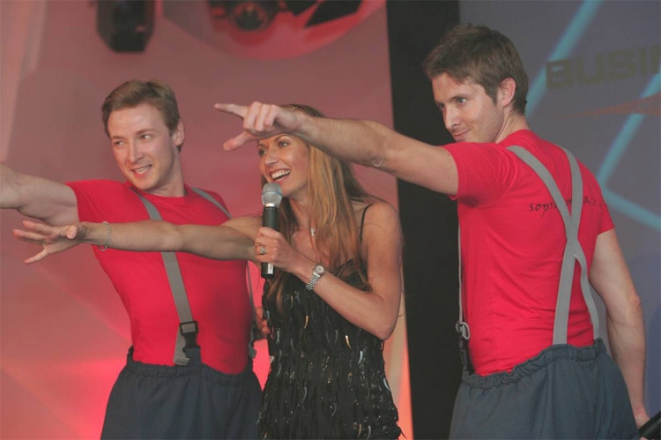 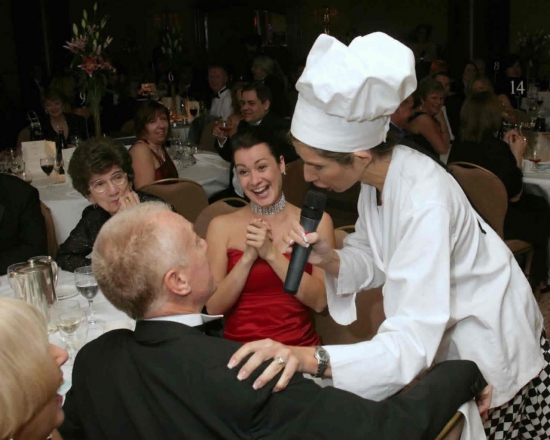 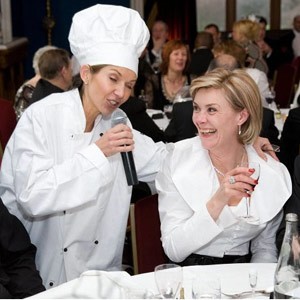 Give your event the "WOW" factor! Singers In Disguise is a fantastic act for any prestigious event. Surprise singers disguised as waiting staff bring unexpected fun to your event. Also available: "Singing Firemen" and "Planted Guests".

Price from £1,158 + travel based on 3 members performing 1 x 30 minutes performance (within 90 minutes of disguised roles)

Songs can include amongst others:

I feel pretty - West Side Story or O Mio Babbino Caro - Puccini
I could have danced all night - My Fair Lady
The Flower Duet - Lakme (British Airways theme)
La Donne Mobile or You Raise Me Up or Sandy
All that jazz - Chicago
Mamma Mia Medley – Dancing QueenMamma MiaThank you for the Music.
Nessun Dorma

Hi Katrina, I just wanted to drop you a mail to thank you so much for an out...

“Hi Katrina, I just wanted to drop you a mail to thank you so much for an outstanding performance on Saturday night. It was absolutely amazing, and everyone was completely wowed. Thank you also for being so flexible on the interaction with Richard, it was extremely believable (his reputation goes before him!) and added to the drama. You all have such fantastic voices, and we were literally gob smacked. Thank you again. Kind regards, Alyson Lumb Senior Group Management Assistant ”

Hi Shaun What an amazing performance. Thank you so much, you added enormously...

“Hi Shaun What an amazing performance. Thank you so much, you added enormously to our special day. You are all, apart from being exceptionally talented, very lovely people. It was an absolute pleasure dealing with you. Thanks so much for everything. Illana and Arnold Eber ”

Hi Shaun Roger and I are going away for a few days, but I just wanted to let...

“Hi Shaun Roger and I are going away for a few days, but I just wanted to let you know before we left that we thought the performance at Rebecca's wedding at Cain Manor on Friday was absolutely brilliant. I don't think there are enough superlatives to describe how wonderful it was: superb, absolutely terrific, amazing, thrilling, it absolutely made the wedding even more memorable. Everyone was talking about it afterwards, and will be talking about it forever. So many people said that it was the best wedding they had ever been to and they meant it! However, I have to say that I think it was all down to Singers In Disguise. Thank you so very, very much. Thank you once again for a truly memorable day. Best regards. Maggie ”

Hello Katrina I can't tell you in an email how fantastic Singers In Disguise...

“Hello Katrina I can't tell you in an email how fantastic Singers In Disguise were. As a chartered marketer I know a little about exceeding expectations, and the Sopranos did this by miles. I hosted Leigh-Anne who was great company and totally convinced all the guests at my table that she was my niece from London. The sheer look of amazement on their faces when she got up and sang was priceless. The Sopranos certainly provided the WOW factor for our 20th Anniversary event and I have been approached by a number of guests who would like to book them for their functions - there is no greater compliment than that. Thank you so much ladies - if and when we need another act we will most certainly come back to you. Kind regards Janet P.S We also raised £10,595 for charity which contributed to the feel good factor. ”

Just wanted to let you know that the performance yesterday during the reception ...

“Just wanted to let you know that the performance yesterday during the reception was fantastic. The guests from 10 different countries are still talking about it now and have marked the singing as the highlight of the wedding having never seen anything like it before. It was difficult keeping things a surprise and the look on my aunties face when your wife announced she was the chef (My aunty is the HR director of the hotel) quote 'that's not my staff!' the penny didn't drop until the first song and you even had the Rome contingent sucked in for a while!! I looked around the room and could see my family crying with emotion during some of the songs. I knew from the website the quality was going to be good but it surpassed all expectations live. Thanks again for really making a memorable day. Juliaxxx ”

Most Alive Network artists travel UK wide and internationally. Get a guide price instantly by clicking the 'get quote' button and entering your event date and location. Make an enquiry and we will liase directly with Singers In Disguise to confirm price, availability, and the provide you with a confirmed quote.

(please ask your agent for details)

(please ask your agent for details)

Supplied if over 50 guests present

"What an amazing show our guests were speechless! You were the icing on the cake many many thanks."

If you are looking for something different that will definitely give your event the "WOW" factor then this is it!

Singers In Disguise is a fantastic act for any prestigious event. It really makes the function different and memorable to the guests.

They recently had the honour of performing at Michael Schumacher’s retirement party in Maranello Italy. They have also performed for Ferrari, Aston Martin, The Malaysian Royal Family, many of the premiership football clubs, Barclays, Deutsche Bank and many of the world's most prestigious companies. They also had the honour of performing at Prince Phillip’s Birthday party at Windsor Castle two years ago - they offer the highest quality singers that money can buy.

"Oh my goodness!!! They came they saw they conquered. Helena Deborah and Rob just blew us all away. Everyone was taken in so the surprise was perfect. It gave us the WOW factor and more. I cannot express to you how grateful we are for you making a very special occasion to us even more special. Everyone has not stopped raving about the performance. There was not a dry eye in the place. The wedding DVD has just arrived and the tears of joy have started all over again.

Thank you again from all of us. My very best regards
Harry Hughes"

Singers In Disguise sing hits from the West End musicals popular well known opera and even a Mamma Mia medley that really gets the guests going!

The singers are disguised as your waitresses chef or maitre d' before bursting into song along with comic role playing. Also if there is a particular table you would like to play a trick on - a planted guest who produces a microphone from her handbag half way through the act and begins to sing! They can also provide a TOP OPERATIC TENOR to play this role a great contrast!

“All week I have been receiving cards letters and phone calls from each and every one of my guests all of them expressing amazement and endless praise for the breathtaking performance.”

The singers are based in London but travel all over the world with this act.

All of the artistes who work for the Singers In Disguise have been specially hand picked for their wonderful and versatile voices as well as being fantastic performers. They have all played LEAD roles in West End shows or have performed with the leading opera companies.

Singing Firemen - two firemen and a planted guest or waitress which really works well, completely fooling everybody. The Guest/Waitress will be a lady soprano adding a wonderful different dimension. Or the guest can be disguised as a Maitre D' (who deals with the firemen when they make their first entrance) or The Chef, who set light to the dessert!

The act includes everything from popular opera, musical theatre including a Grease medley guaranteed to get the crowd going!

Songs can include, amongst others:
You Raise Me up (West Life)
Soul man
Love Changes Everything (Aspects of Love-Lloyd Webber)
La Donna Mobile (Rigoletto-Verdi)
The Sound of Music
Grease Medley
Hot Stuff
Nessun Dorma (Taurendot- Puccini)

'Planted' Guests - IS HE THE COMPANY ACCOUNTANT?..IS SHE THE BOSSES NIECE?..IS HE A NEW EMPLOYEE?!?…NO -THEY ARE …

...“The Hidden Guests!!” –Three top class singers disguised as guests at your event!

Can you imagine what it would be like to have not only 1 planted guest, but 2 or 3 top class singers planted as guests burst into song from different tables at different points of your Event!

Planted Guests consists of either 3 or 4 singers - A mix of male and female. The first singer begins as a legitimate swing cabaret singer, starting with a Sinatra classic “Come fly with me” and that’s what your guests think the night’s entertainment is going to be.

But before the “swing” singer can sing his second song, a guest from the audience rudely interrupts his song with the fantastic Pavarotti aria “Nessun Dorma”. The “Swinger” and the “Tenor” decide to share the bill together and after singing the Dean Martin classic “That’s Amore” and the famous “Pearl Fishers Duet” performed by the 3 Tenors (to make it fair!), they are rudely interrupted by a female voice from another table who is then joined by ANOTHER female voice to perform the wonderful Barbra Streisand/Donna Summer Duet “Enough is Enough”!

Planted Guests is all the entertainment you need for a fantastic event. It is in two 25 minute halves or one 45 minute slot but the unique difference with hidden attributes is that all the songs performed in this act were performed and made famous by famous singers. In fact the Planted Guests sing songs with an amazingly wide range, from Sinatra to Pavarotti, Streisand to Garland and Abba to Queen. We even pay tribute to James Bond and sing a selection of Bond theme songs made famous by Shirley Bassey and Tom Jones. The Hidden Attributes singers are not impersonators as they are too strong in their own right - they sing these songs in their own style.

After booking, speak directly with Singers In Disguise.