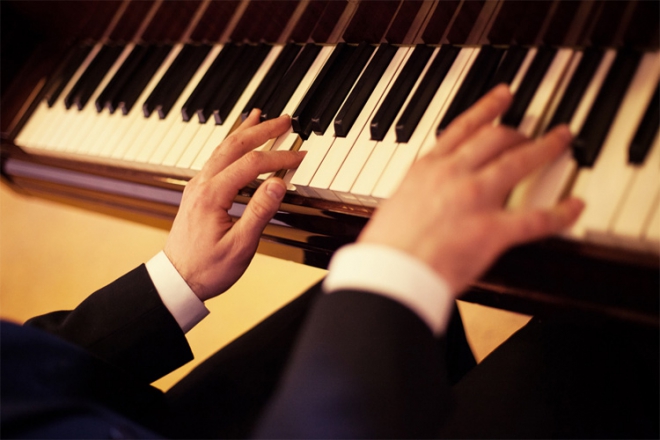 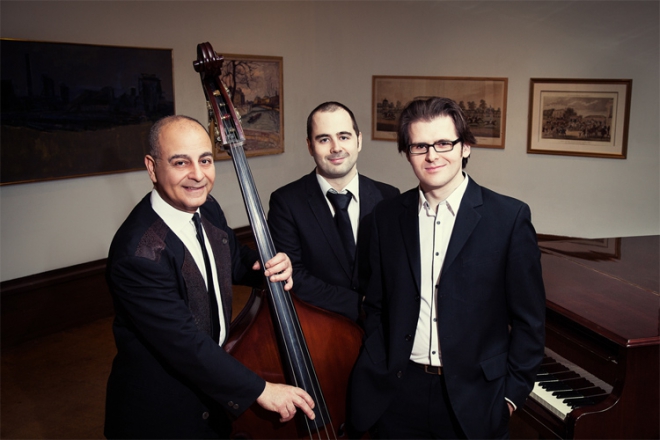 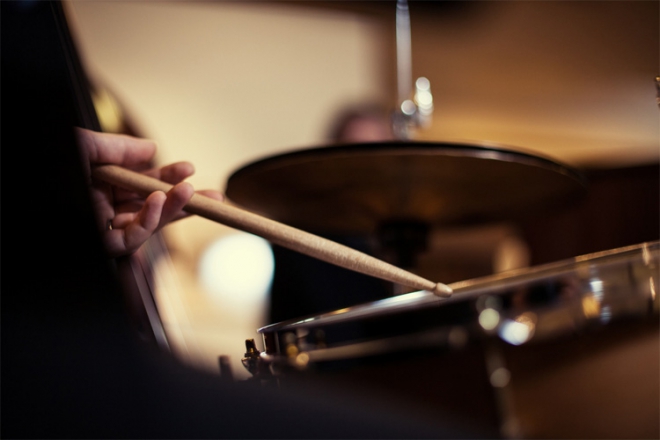 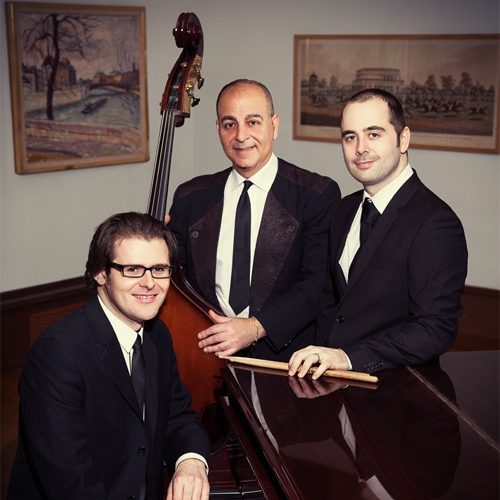 The Scott Grant Trio specialise in swing & jazz standards as well as the very best in piano based rock & pop. Flexible and versatile, their massive repertoire covers a huge variety of artists with lively danceable hits from the 30s to the present day. ...

60s
All You Need Is Love - The Beatles
Beatles 60s Medley
Build Me Up Buttercup - The Foundations
California Dreamin’ - Mammas and Pappas
Can’t Take My Eyes Off You - Andy Williams
Daydream Believer - The Monkees
Delilah - Tom Jones
Gimme Some Lovin’ - The Spencer Davis Group
Happy Together - The Turtles
House Of The Rising Sun - The Animals
I Can't Get No Satisfaction - Rolling Stones
I Feel Fine - The Beatles
I Got You (I Feel Good) - James Brown
I’m A Believer - The Monkees
Mustang Sally - Wilson Pickett
My Girl - The Temptations
Pretty Woman - Roy Orbison
Sitting On The Dock Of The Bay - Otis Redding
Stand By Me - Ben E. King
Suspicious Minds - Elvis Presley
Sweet Caroline - Neil Diamond
Whiter Shade Of Pale - Procul Harum
You’ve Lost That Lovin’ Feelin’ - The Righteous Brothers

Ballads
Against All Odds - Phil Collins
Ain't No Sunshine - Bill Withers
Brick - Ben Folds Five
Candle In The Wind - Elton John
Can't Help Falling In Love - Elvis Presley
Can You Feel The Love Tonight - Elton John
Careless Whisper - George Michael
Close To You - The Carpenters
Desperado - The Eagles
Don’t Let The Sun Go Down On Me - Elton John
Easy - Lionel Richie & The Commodores
Everybody Hurts - R.E.M.
Everything I Do (I Do It For You) - Bryan Adams
First Cut Is The Deepest - Rod Stewart
Halleluiah - Leonard Cohen
Imagine - John Lennon
Jessie - Joshua Kadison
Just The Way You Are - Billy Joel
Love Is All Around - Wet, Wet, Wet
Mandy - Barry Manilow
The Scientist - Coldplay
She - Charles Aznavour/Elvis Costello
She’s The One - Robbie Williams
Something - The Beatles
This Year’s Love - David Gray
When You Say Nothing At All - Boyzone
Wonderful Tonight - Eric Clapton
Your Song - Elton John

I have already emailed Scott to say how brilliant they were again and to thank t...

“I have already emailed Scott to say how brilliant they were again and to thank them for yet another fantastic performance. They really are so good, we were all up dancing and didn’t want to evening to finish. They had travelled such a long way for what seemed such a short time but as before they were professional in their setting up and even did one extra song for us as we didn’t want the to end. Please pass on our very grateful thanks again, especially as it was such a long way for them to travel, and also thanks to you and Alive network, a great company whom I will certainly recommend!”

The music was amazing, such a wide variety which suited all tastes.

“Thank you for making my retirement party so special, the music was amazing, such a wide variety which suited all tastes and great to get everyone on their feet. So professional and organised, would not hesitate to recommend them for any event.”

“Scott Grant Trio were a major part of Joy's birthday party and a major reason why everyone had such a good time. We appreciated your willingness and ability to play the stuff we oldies wanted - although we know your range could take you so much further. We also appreciated your professionalism, in the communication before the event as well as on the night. You arrived when you said you would, and took the event as it was. Wonderful. Thank you indeed.”

“Simply to say you and the band were fantastic. Extremely professional and superb across every song, especially Dakota and Tom Jones for us Welshies. An extremely memorable evening for many reasons - everyone loved it. Thanks for your efforts again. I would recommend you highly to anyone reading this.”

Would recommend without reservation.

“Thank you to the Scott Grant Trio who played at our wedding - the music was great and many guests commented on it. Scott also made our first dance really go smoothly even though we hadn't rehearsed it before - brilliant timing! Would recommend without reservation.”

Price from £905 + travel from South Yorkshire

Most Alive Network artists travel UK wide and internationally. Get a guide price instantly by clicking the 'get quote' button and entering your event date and location. Make an enquiry and we will liase directly with Scott Grant Trio to confirm price, availability, and the provide you with a confirmed quote.

Upgrade to a party set to get your guests dancing. Please select this option for all bookings after 6pm, includes upgraded PA system and lighting.

Due to the need for bigger PA

(not available for solo piano bookings)

"Scott Grant Trio surpassed all expectations with a quite superb performance that dazzled and truly gave us value for money."
-Tim and Learna Orford

The Scott Grant Trio specialise in swing and jazz standards, from laid back dinner jazz and background music to hot swing tunes, with splash of Latin and the odd waltz thrown in for good measure. The Scott Grant Trio does it all and are available to perform at your wedding breakfast or drinks reception, civil partnership, private or corporate function, award ceremony or ball, adding a touch of sparkle and sophistication to your event.

The trio is led by Scott Grant on piano and vocals, with Robert Clark on drums and Emilio Montuori on the bass, three highly professional musicians with many years of playing experience together. The Scott Grant Trio can be joined on request by one of our highly acclaimed special guest soloists on saxophone, trumpet, or trombone (subject to artist availability) broadening the range of possibilities still further.

With influences rooted in the Great American Songbook, The Scott Grant Trio perform standards from the great songwriters of the Twentieth Century, including George and Ira Gershwin, Cole Porter, Richard Rodgers and Lorenz Hart, and Irving Berlin, with songs from artists such as Frank Sinatra, Dean Martin, Sammy Davis Jnr., and Nat King Cole as well as some interesting twists on modern songs.

With an exciting and varied song list catering for all ages, the Scott Grant Trio perform fantastic tunes from across the decades. Special song requirements are catered for free of charge and the trio are happy to rehearse any song requests for you.

The band will tailor their look to suit your needs whether it be black tie and tuxedo or something more relaxed.

The Scott Grant Trio provide their own high quality PA and stage lighting as part of the package. Lowest rates in Yorkshire and London but will travel country-wide.

Standard Evening/Party Set
Why not upgrade your music choice from background music to a swinging party set? The Scott Grant Trio can provide music for all kinds of events and venues creating the perfect atmosphere for your evening reception, private or corporate party, or ball. Flexible and versatile, their massive repertoire covers not only swing and jazz standards, but a huge variety of artists with lively danceable hits from the 30s and 40s to the present day, that will have your guests on their feet all night long!

Background music is provided free of charge and a DJ option is also available at a small extra cost. This is provided via a laptop computer containing a huge amount of popular songs, and is controlled by one of the band members, who will make basic announcements and take requests.

Scott Grant Trio can also perform as a vibrant, upbeat 4 piece party band playing the very best in piano-based rock, pop and swing. Please see the video below or click The Brightsides profile for more information.

Meet The Band:
Scott Grant - Lead Vocals/Piano
Scott Grant is an accomplished singer/pianist with a repertoire spanning eight decades. Performing professionally since 2003 Scott has performed all over the world as a solo piano vocalist for P&O North Sea Ferries, Warner Hotels, Suncruises and Royal Caribbean Cruise Lines. Since his return to the UK in 2006 Scott has been performing at venues across the country holding residencies at The Charnwood Hotel, Choice Bar and Restaurant in Manchester and The Sands Venue in Gainsborough where he has supported artists including Acker Bilk Stacey Kent and Frank Carson. Fresh on the London scene, more recently he has appeared at venues including Piano Soho, Piano Kensington, the Hyatt Regency Churchill Hotel and Brasserie Toulouse Lautrec. Equally at home performing solo piano vocals or leading his own band Scott specializes in swing and jazz standards as well as the very best in piano based rock and pop with a vast repertoire that is increasing all of the time.

Emilio Montuori - Bass
Emilio studied double bass for 7 years at the Conservatory of Music in Salerno Italy before taking up music as a profession performing very different styles of music in theatres cabaret venues touring shows and on board cruise ships all over the world. In the last five years alone Emilio has played with the Nelson Riddle UK Big Band (including a Palladium performance) the New Squadronaires Big Band Memphis Belle Big Band Kings of Swing Big Band and the Glenn Miller Tribute Big Band. He has also acted as musical director for Joan Rivers’ UK National Tour performed for pantomimes at Nottingham Playhouse and Sheffield Lyceum and undertaken UK theatre tours and an Australian national tour and TV shows with "Reelin` and Rockin" featuring Mike Pender Gerry Marsden Dave Dee Wayne Fontana Brian Poole Dave Berry Tony Craine and The Nolans.

Rob Clark - Drums/Backing Vocals
Rob studied percussion at The Birmingham Conservatoire from 1997 – 2001 and since graduating he has worked extensively as a drummer and percussionist both in this country and abroad. He has worked with many distinguished artists including The Drifters, Elaine Delmar and Joe Longthorne and performed at the International Association of Jazz Educators Conference in New Orleans, USA.  Musical theatre work includes UK tours of “Cabaret” & “Seven Brides for Seven Brothers”.

His orchestral work has included performances with The National Youth Orchestra, Orchestra of the Swan, Orchestra da Camara, ESO and The City Concert Orchestra. He has also worked under the baton of renowned conductors such as Yan Pascal Tortelier, Sir Roger Norrington and Sir Colin Davis.

As a music educator, Rob is in high demand. He runs percussion workshops in primary schools across the UK aimed at developing whole class music tuition. Rob has recently been appointed to the panel of examiners for ‘Rockschool’, assessing musicians for examinations in the UK and abroad. His work in education also involves drum kit and percussion tuition at independent & preparatory schools in Yorkshire, Lincolnshire & Nottinghamshire.

Evelyn and The Vipers