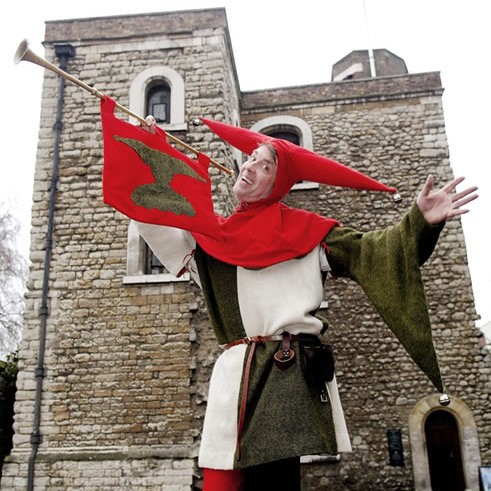 Patch is a jester of international repute, having performed all over the UK & Europe. He is a regular performer at Hampton Court Palace & has also performed for Her Majesty the Queen. In 2005 he was created English Heritage National Jester.

“Very entertaining, the jester worked hard all evening. People responded well to him I had very positive feedback from visitors and councillors ”

He provided lots of laughter - Brilliant.

“A great evening was had by all and it was made very special by Patch, he provided lots of laughter and a very smooth transaction. We were very, very happy with Patch - A Right Royal Fool, he was brilliant.”

“This is just to say that we had an absolute blast at our Christmas party and this was in no small measure to Patch - A Right Royal Fool who acted as our “Court Jester”. Patch was exceptionally funny and had done a lot of background work on us all which livened things up considerably. The fact that there was quite a bit of audience participation worked brilliantly as everyone loves to have a good laugh at the expense of their colleagues! I would recommend Peet very highly to future customers of yours. Thank you again and have a good Christmas.”

“Alive Network provided an easy to book customer focused system that was responsive to my needs allowing me to compare acts, read other customer reviews and see how acts could be combined. This allowed me to combine Patch a right Royal Fool with the Medieval Dragons to deliver an excellent night for my guests. Patch's performance exceeded mine and my guests expectation.”

We had a great evening with the Mediaeval Dragons and Patch the Fool. They were...

“We had a great evening with the Mediaeval Dragons and Patch the Fool. They were absolutely brilliant and entertained all our Directors and Delegates all evening. I didn't get a chance to thank them personally as I had to escort some of our guests back to their hotels, but please can you pass on my extreme thanks, they worked so hard and did a truly fantastic job! I shall definitely be recommending your booking service.”

Most Alive Network artists travel UK wide and internationally. Get a guide price instantly by clicking the 'get quote' button and entering your event date and location. Make an enquiry and we will liase directly with Patch- A Right Royal Fool to confirm price, availability, and the provide you with a confirmed quote.

Up to 5 hours performance

Patch is a fool of international repute, having performed all over the UK and Europe. He is a regular performer at Hampton Court Palace and has also appeared at the Tower of London, and at – among others – Stirling, Cardiff and Caerphilly Castles.

In 2002 he was fortunate enough to perform for Her Majesty the Queen as part of her Golden Jubilee celebrations. In 2005 he was created English Heritage National Jester.

Patch has researched the nature of fooling and the history of the Fool and has devised a character which is as engaging as it is comical. Using the character of the traditional English Fool who ‘hath not so much brains as earwax’ he embodies the very spirit of Folly. Equally at home at a castle, manor house or hotel, he is guaranteed to spread motley mayhem all around.

Capable of a large variety of serious silliness he can perform as a mix and mingle entertainer, or in his own stand alone show, lasting up to forty minutes and culminating in fire eating on stilts. The performance can be staged indoors (with ceiling heights 10 feet and above,) outdoors; or indoors with an outdoor finale if fire is not possible indoors. If necessary the finale can be performed without fire.

Patch has also made a speciality of banquets and weddings and is happy to provide a bespoke service for clients looking for a traditional mediaeval banquet or a wedding with something different.

After booking, speak directly with Patch- A Right Royal Fool.