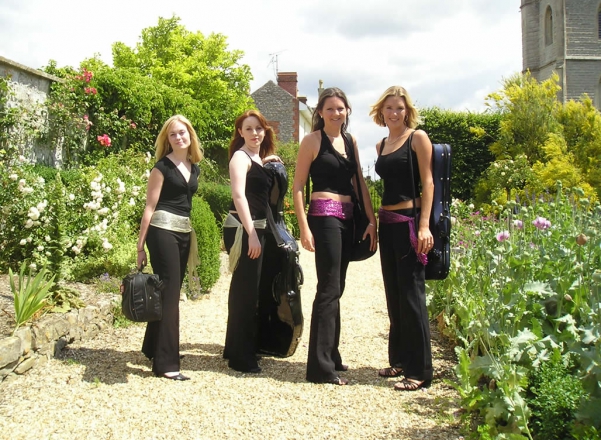 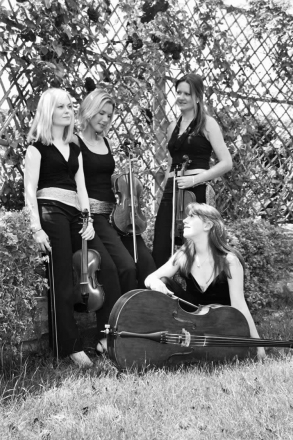 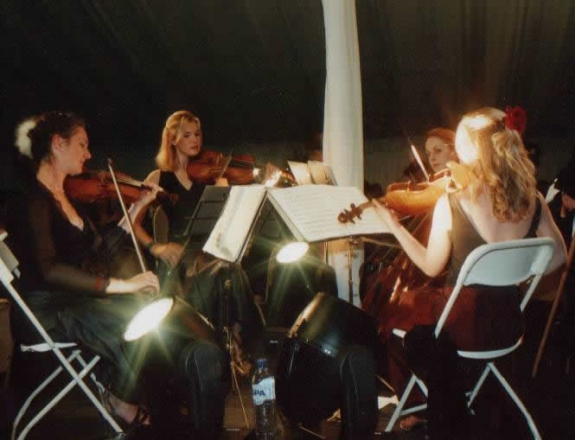 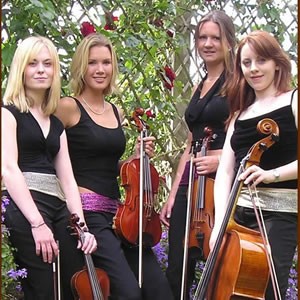 London based No Strings Attached are an all female string quartet. They have been playing together for years and they are all highly trained musicians. They are the perfect choice for corporate events, weddings, garden parties & summer balls.

I just wanted to say thank you for arranging for No Strings Attached to play at ...

“I just wanted to say thank you for arranging for No Strings Attached to play at our daughter's beautiful wedding. It was a very emotional day for everyone and one we will remember for years to come. No Strings Attached's contribution to the day was exceptional. They were very professional, entertaining and, lastly, four lovely girls whose contribution to our daughter's day was memorable. Everyone commented on our string quartet and, most importantly, our daughter and her husband were so pleased with their high standard of musicianship. Our daughter had said that whenever she got married she would like a string quartet to make her day and No Strings Attached certainly fulfilled that dream. Thank you again. ”

Dear Nick, Thanks for this. Alive Network were efficient, helpful and accessi...

“Dear Nick, Thanks for this. Alive Network were efficient, helpful and accessible. You did what we asked. No Strings Attached were an outstanding success - highly skilled, immensely pleasant, flexible, low-key, musical and greatly admired by all our guests. Without fuss, they let Sam play two small pieces with them. This was a highlight for him and for us. No more barmitzvahs for us, but I would use Alive Network and NSA again, without hesitation. Many thanks. Rob Behrens”

You were all great! Thank you for being so accommodating and flexible on the ...

“You were all great! Thank you for being so accommodating and flexible on the day. Your time and effort in organising the music were truly appreciated and your music was the icing on the cake… Everything we had dreamed of. Thank you, ”

A quick note to say thank you to the quartet for playing at our wedding last mon...

“A quick note to say thank you to the quartet for playing at our wedding last month. The music and choice of music was excellent, and we all share the view that had you not been there, there would have been something missing from the day. Many guests commented on your playing and were similarly delighted. My parents also asked me to pass on their grateful thanks and best wishes with ours, to you and the other girls. Very many thanks and best wishes, ”

Most Alive Network artists travel UK wide and internationally. Get a guide price instantly by clicking the 'get quote' button and entering your event date and location. Make an enquiry and we will liase directly with No Strings Attached to confirm price, availability, and the provide you with a confirmed quote.

No Strings Attached was formed in 1998 when Rebecca Polly Caroline and Celia met in the Cambridge Symphony Orchestra. Since then their charismatic vibrant performances have taken them to a range of functions including corporate events weddings garden parties summer balls and studio sessions. They have played at Terence Conran’s Bluebird restaurant in London as well as the Dorchester in Mayfair Fitzwilliam Museum in Cambridge and Powderham Castle in Exeter.

No Strings Attached is available for engagements anywhere south of Birimingham including London and all along the M4 corridor.

Rebecca plays lead violin in No Strings Attached. Over the last decade she has travelled all over world with various ensembles most recently the world-renowned Trinity College Chapel Choir with whom she held a choral scholarship. Rebecca holds a BA Hons in Music and Languages from Cambridge University.

Polly plays second violin in No Strings Attached and has done since the quartet’s formation in 1998. A keen musician from an early age, Polly has led several orchestras and string ensembles, many of which she has organised herself. She is also a part-time novelist.

Caroline has been playing the viola since she was eight, “because she liked the name”! She also plays piano, flute and mandolin. Although classically trained, she has a passion for folk music and loves Irish fiddling along with her boyfriend, a keen accordion player. Caroline's occupations include instrument retail, composing and writing.

Celia is the cellist in No Strings Attached. She started learning music at the age of three, and since then has played in settings as diverse as London’s Jazz Café and St John’s Smith Square. She has performed in masterclasses with Steven Isserlis and Raphael Wallfisch, and her cello, a replica of a Stradivarius, was made by the British maker Colin Irving.

Repertoire
Over the course of several years, No Strings Attached have built up a wide-ranging repertoire of music. Below is a list of their most popular requests, which is by no means exhaustive. If there is something in particular that you would like them to play, they will happily arrange it for you, as they have done many times before. No Strings Attached adapt every performance to suit the occasion!

Engagements
No Strings Attached has played at a variety of engagements including:

After booking, speak directly with No Strings Attached.