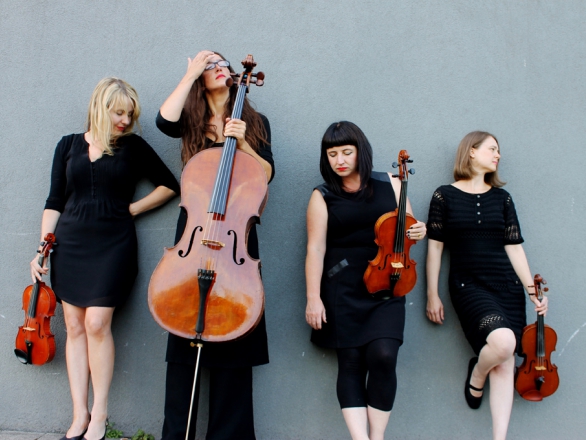 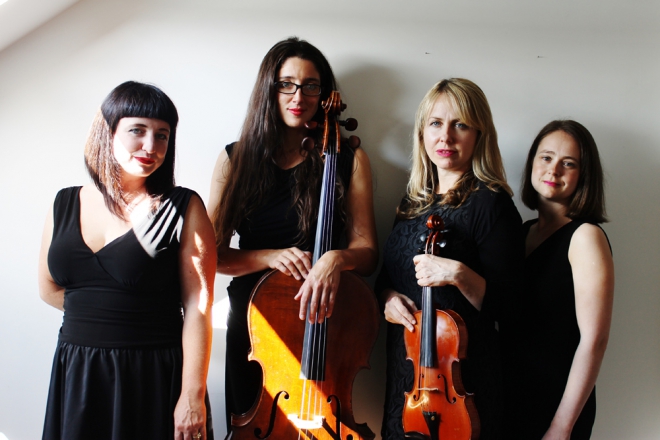 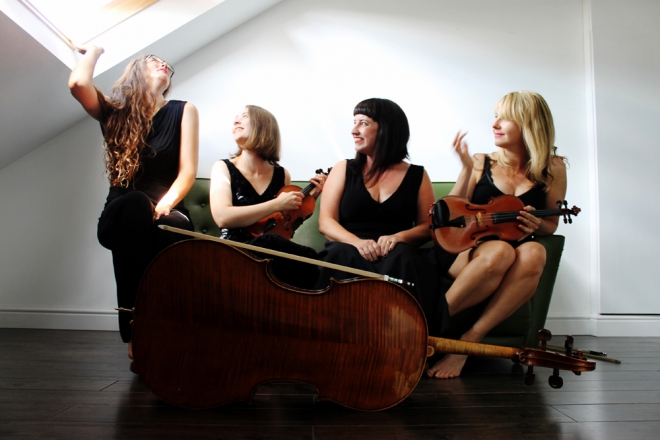 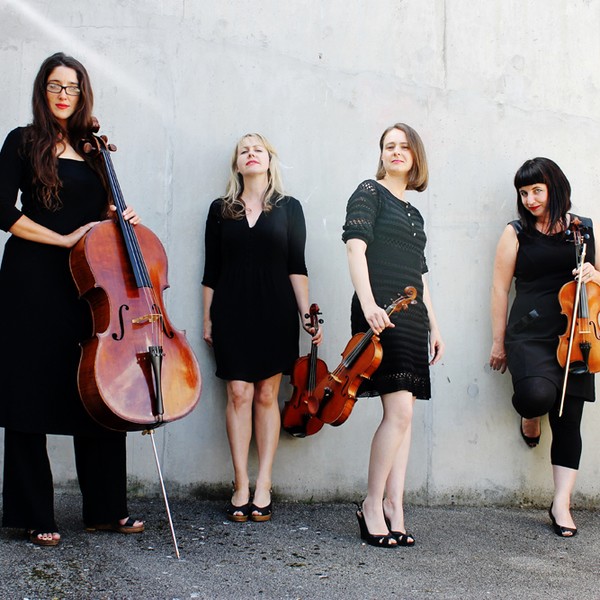 The string quartet with experience, professionalism & an extensive repertoire of classical, jazz, tangos, film themes & slick pop tunes. Solar Strings are the perfect choice for any wedding, dinner, corporate function or private party in the North!

Solar Strings performing One Day Like This - Available from AliveNetwork.com

“These guys were absolutely outstanding. Everything we asked for was delivered. Totally made our day and our guests loved them. The music was beautiful. Thank you so much, and would recommend anyone having a wedding to book them immediately- it will be the best money you spend for your occasion.”

Solar Strings played at our wedding

“String Quartet Solar Strings played at our wedding on 28th August before the ceremony and afterwards in the garden. They played beautifully and we received many compliments from our guests. We ageed a playlist beforehand and they were very happy to oblige. I would definately recommend them. Thank you for making our wedding extra special Elaine and Paul x”

Absolutely perfect-Thank you so much

“Thank you so much for playing at our wedding. The songs were absolutely beautiful and all our guests commented on how lovely the music was. We would highly recommend and would definitely book again for another event.”

The most beautifully played classics I've ever heard

“Every single person who spoke to me about Solar Strings performance at my wedding had nothing but praise for them. They knew what I wanted to hear from a few chats and didn’t disappoint. My father in law was blown away by them! Hearing some of my fathers favourite songs played so beautifully meant so much to me and I can’t recommend Solar Strings enough. They travelled a very long way to be a part of my day and I can’t show them enough how grateful I am that they were there!”

Price from £621 + travel from Newcastle upon Tyne

Most Alive Network artists travel UK wide and internationally. Get a guide price instantly by clicking the 'get quote' button and entering your event date and location. Make an enquiry and we will liase directly with Solar Strings to confirm price, availability, and the provide you with a confirmed quote.

Up to 2 hours (background music)

Up to 2 hours (Ceremony plus Drinks Reception)

Up to 3 hours (background music)

Up to 3 hours (Ceremony plus Drinks Reception)

They are available to perform in Northumberland, Tyne & Wear, County Durham, Teesside, Cumbria and N. Yorkshire. Engagements outside these areas will also be considered. Please contact your agent with your requirements.

Since graduating Jo has worked with Ulster Orchestra, which involved live radio 3 broadcasts, recording sessions and a tour of Ireland. She has also performed and recorded with the BBC Philharmonic.

Jo joined the quartet in 1999 and since then has also worked regularly with the Northern Sinfonia as a freelance violinist, taking part in many concerts, recordings and education projects. She has also performed with Leslie Garrett, Sir Cliff Richard and The Avison Ensemble and recently performed on stage with The Royal Shakespeare Company.

Kirsten Gibson (vln 2)
Kirsten studied at the Royal Scottish Academy of Music & Drama and Newcastle University. She graduated from the University of Newcastle upon Tyne with a first class honours degree then in 2001 with an MLitt with distinction.

Whilst studying, she participated in master classes with Leon Spierer, Madeleine Mitchell and The Alberni String Quartet. She has since performed with Aled Jones and Thomas Allen.

Having joined the quartet in 1999, Kirsten is an experienced chamber musician as well as performing regularly in orchestras throughout the north of England. She currently combines teaching at the University of Newcastle upon Tyne with performing and doctoral research.

Gayle Hutchinson (viola)
Gayle is from County Durham. She formed Solar Strings while studying for a BA (Hons) Music at the University of Newcastle upon Tyne. She has also worked with a range of artists such as Smoove & Turrell (Jalapeno Records), The Matinee Orchestra (Arable Records), Beccy Owen and Mercury Music Award nominee Kathryn Williams, with whom she performed at the Queen Elizabeth Hall, London and recorded the album Old Low Light.

Ele Leckie (cello)
Born in 1975, cellist Ele Leckie first studied under a scholarship at the Junior Department of the Royal Academy of Music then progressed on to the Royal College of Music to learn with Anna Shuttleworth and Alexander Bailey. Here she also studied piano with Bernard Roberts and chamber music with The Chilingirian Quartet. She has taken part in many masterclasses, most notably with William Pleeth and Ben Zander, the latter of which was filmed and broadcast for the BBC.

She worked as an orchestral musician with the Wellington Sinfonia in New Zealand for two years and since returning to the UK, has performed with artists ranging from the Royal Shakespeare Company (on stage and BBC Radio 4 broadcast), to Peppa Pig and Mr. Bump for Channel 5 Milkshake! Tour. She has played on touring West End productions and has performed and recorded with musicians such as Lesley Garrett, classical pianist John Lill and Paul Smith of the band Maximo Park.

Ele currently divides her time between performing with the quartet and freelance playing and teaching in the North East of England.

Weddings-
Solar Strings will provide the perfect soundtrack for your special day. They can provide live music for any combination of the following:

Pre-ceremony drinks - music played by a string quartet is the perfect accompaniment to help you unwind whilst catching up with family and friends. (approx 30 mins).

Wedding Ceremony - during the wait for the bride, live music helps to put the wedding party at ease whilst waiting for the arrival of the bride. The quartet generally play for 15 minutes prior to the ceremony, then again during the entrance, register signing and exit, for which you can choose specific music from the repertoire. If your ceremony is religious, they can usually arrange accompaniment hymn music (approx 45 mins).

Photos and Drinks Reception - after a seamless relocation to another room or even another venue, Aurora Strings can either play a mixed repertoire from the list or they can adapt to suit your requirements (approx 1 hour).

Recording and Session Work-
The quartet is experienced in recording and session work. Recent involvement has included strings for Gary Hilton - Not Afraid to be Happy as well as Smoove - Coming Back and Kathryn Williams' Shop Window EP. The quartet have also worked independently with artists such as The Divine Comedy, Sir Cliff Richard, Beccy Owen (Fairy Snuff), The Matinee Orchestra (Arable Records), Loon and Smoove & Turrell (Jalapeno Records).

Solar Strings' Comments
"Your playing added a real touch of class to the proceedings. In addition to playing beautifully, you were so accommodating and flexible. Things fell behind a little but ‘the band played on’ beyond expected while there were still guests in the Great Hall. Sincere thanks – I will certainly recommend you."
Bob Watson (Durham Castle)

"Lots of people commented on aolar strings and how good you all sounded. The photographer, who has attended lots of weddings, said that you were the best string quartet he had heard, which says a lot about your playing
and talents. Once again thanks for making our day special."
Ged and Liz Carlin (Seaham Hall)