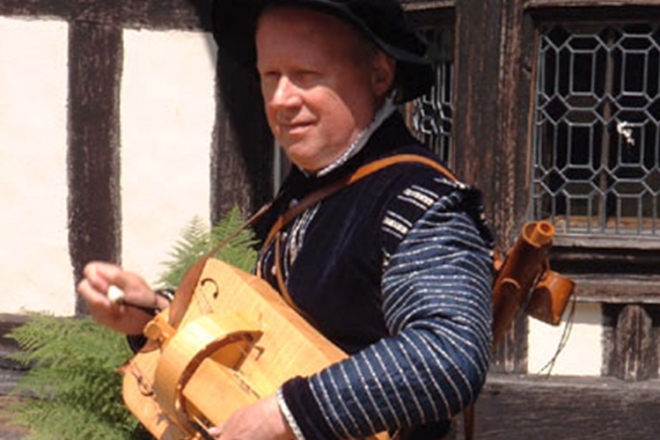 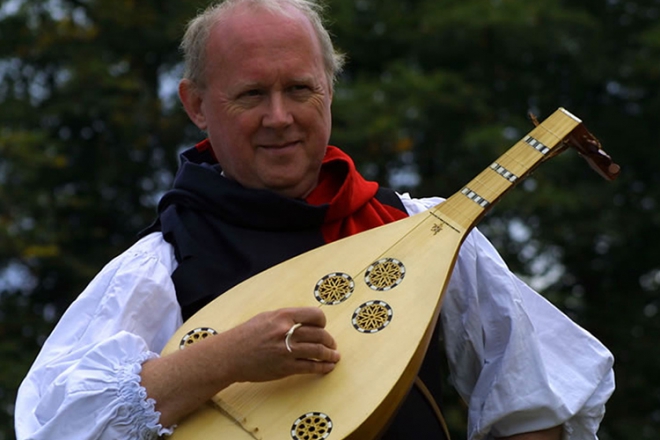 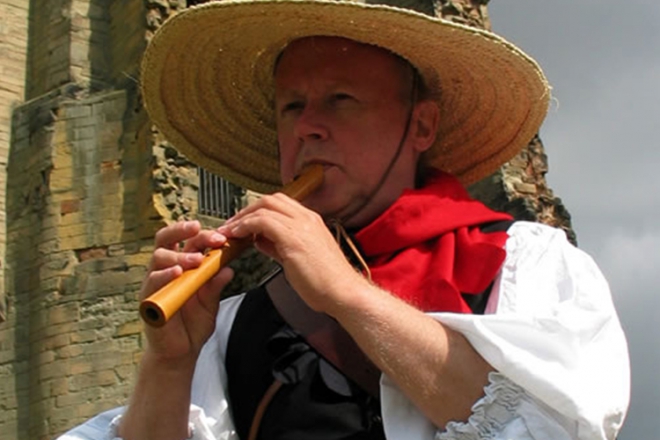 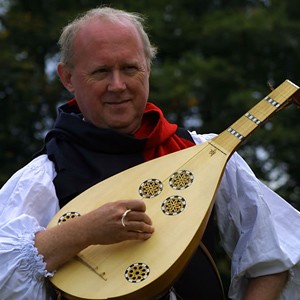 With previous clients including the National Trust, English Heritage & The Tower Of London, Medieval Minstrel is the go-to musician for medieval entertainment. Performing period music on a range of instruments from the hurdy gurdy, bagpipes, lute & dulcimer, Medieval Minstrel provides a unique & interesting act that will wow your guests!

Tudor Christmas Music
Christmas music from the time of King Henry VIII and Queen Elizabeth I - carols sung to the lute instrumental music on hurdy gurdy, flute, recorders and dulcimer.

'Sellinger’s round' / English jig (hurdy gurdy)
'Allegrezza d’amore' (dulcimer)
'Tobacco is like love' (vocals)
'Almaine' (lute)
'L’omme armé' (recorder)
'The recruiting officer' (baroque flute)
'Quant je voi yver retorner' (medieval flute)
'A Medieval Christmas' - Medieval dance music and carols to celebrate Christmas!
'The Pied Piper' - Music for an itinerant medieval minstrel.
'The Art of the Medieval Minstrel' - A programme of medieval dance music and song.
'The Cult of the Virgin' - Songs and dances dedicated to the Virgin Mary from medieval Spain and England.
'Elizabethan Gems'- Popular song and dance in the reign of Good Queen Bess.
'Gunpowder, Treason and Plot' - A commemoration of the Gunpowder Plot: music from the time of King James I.
'The English Balladeer' - Playford dances and popular ballads in the reign of King Charles I.
'The Georgian Minstrel' - Popular ballads and dance music from the 18th century.
'Jackie Tar' - Ballads, shanties and dance music from the time of Lord Nelson

One of our most enjoyable evenings for a long time.

“We recently engaged Medieval Minstrel to present a lecture to our society on Elizabethan Music & Instruments. It turned out to be a night at the Elizabethan Proms with a Hurdy Gurdy, Lute & Pipes and many accompanying ballads. One of our most enjoyable evenings for a long time and we will look forward to him returning in the near future.”

Really brought the history to life!

“We were delighted to welcome Medieval Minstrel as part of our Open Lecture series at The University of York. Our audiences are made up of members of the public, staff and students and he pitched the session perfectly with an interesting blend of musical performance and insights into the Tudor contexts, in which they were originally written and performed. This approach really brought the history to life and I know that audiences left feeling that they had learnt a lot as well as enjoyed listening to the music. Medieval Minstrel brought humour and versatility to the session and we hope to welcome him again in future.”

Absolutely brilliant and made our wedding day even more perfect!

“Fantastic! Medieval Minstel was absolutely brilliant and made our wedding day even more perfect! What a talented musician he is - I would not hesitate to recommend Medieval Minstrel. 10 out of 10... Thank you very much indeed!”

Perfect performance and a good bloke.

“Medieval Minstrel was an important part in making our wedding day so special. Perfect performance and a good bloke. Highly recommended.”

“Alive Network provided me with professional support in booking artists. The process was easy, well supported by competent and capable staff who lifted all of the worry in respect to dealing with artists. I would recommend Alive Network to anyone. They provide a first class service and take a good deal of pressure from event organisers. Medieval Minstrel was great fun and extremely accomplished as an entertainer and musician. The scope of his talents was impressive and he integrated with our other entertainers, providing them with musical support to their acts – which was brilliant. He is very polite and clearly experienced, working the room and guests with an expert touch. I would have no hesitation in recommending both Mediaeval Minstrel and Alive Network. Excellent service, and excellent artists.”

Price from £372 + travel from West Yorkshire

Most Alive Network artists travel UK wide and internationally. Get a guide price instantly by clicking the 'get quote' button and entering your event date and location. Make an enquiry and we will liase directly with Medieval Minstrel to confirm price, availability, and the provide you with a confirmed quote.

Solo instrumentals: can play the hurdy gurdy, recorders, flute, dulcimer and lute; he also sings to the accompaniment of the medieval lute, cittern, English guitar or banjo.

With previous clients including The Tower of London, Hampton Court Palace, the National Trust, and English Heritage, our Medieval Minstrel is the go-to performer for historical music!

This amazingly versatile and talented musician sings to the lute, and plays an extensive range of other period instruments, including the hurdy gurdy, bagpipes, hammered dulcimer, recorders and flute. His repertoire spans the 13th to 19th centuries, encompassing Medieval, Tudor, Stuart, Georgian and Victorian eras. As well as giving both formal and informal concerts, he performs at banquets, pageants, weddings, private parties, and living history events. He brings history to life through music!

Dulcimer
The dulcimer takes its name from the Latin word dolcis, meaning sweet; it was so-called because it was considered to make a sweet sound. The dulcimer is played with little sticks, or hammers, which are used to strike the strings. The hammers are made of wood, with the tips covered in leather to soften the tone. The strings are made of metal, brass being the material most likely used in the Middle Ages and Renaissance.

Hurdy Gurdy
The hurdy gurdy is a form of mechanical violin, in which a continuously turning wheel takes the place of the bow. Keys are used instead of fingers to stop the strings, and to produce a tune. The hurdy gurdy also has drone strings, which play one continuous note (and sound something like bagpipes). While turning the wheel, the player can produce a buzzing sound to beat out the rhythm of the piece, as if playing on a drum.

Lute
The lute is thought to have developed from an Arab instrument called the ‘al ?ud’, as indeed is its name. The word ?ud simply means ‘wood’, the material from which the instrument is made. The lute was one of the most important musical instruments in Europe, from the Middle Ages to the eighteenth century — used for solos, and to accompany other instruments or voice.

Woodwind
Both recorders and flutes were extremely popular in the Middle Ages and Renaissance. The flute in particular is an instrument of great antiquity, and dates back to the time of the ancient Greeks.

Little Moreton Hall, Cheshire (“Tudor Christmas”, with Anna Keightley, soprano)
"Medieval Minstrel and Anna Keightley... added to the festive atmosphere with various delightful airs and ballads whilst dressed in authentic clothing. Not only did they captivate all that entered the hall, but momentarily transported everyone around them to another time in history, it was quite magical."
Skirmish: The Re-enactment Magazine

Ilkley Manor House, North Yorkshire (solo concert)
"Once again the Manor House was packed to capacity for what turned out to be a good humoured and very instructive concert. Dressed in period costume with a dashing feather in his cap, Medieval Minstrel treated his audience to a range of airs and ballads from the time of King Charles I.

His quiet and unprepossessing manner immediately endeared him to all present and he soon had feet tapping to the brisk rhythm of the hurdy-gurdy. A carefully constructed introduction to each instrument — the aforementioned hurdy-gurdy, the flute, dulcimer and lute, and the type of tune about to be played or sung, added to the enjoyment of the evening.

Although lacking the nuances of later music with its elaborate crescendos and embellishments, Mediaeval Minstrel gave his audience an insight into the vigour and love of words and music enjoyed during the period of the English Civil War and the early renaissance."
Ilkley Gazette

“Musical Wizard:”Medieval Minstrel at Nunnington Hall, North Yorkshire
"Against the backdrop of the oak-panelled Great Hall, and under the hooded gaze of Lord Preston’s impressive portrait, Medieval Minstrel, resplendent in black velvet and sporting a large ostrich-feather hat, took us through a tour of the music and instruments of the Civil War. The Hall itself was used as lodgings for the Roundheads and one could imagine the music echoing down the centuries to a very different audience.

Medieval Minstrel performed two different concerts, beginning with a selection of tunes by John Playfdord (1651), played with great dexterity on the hurdy-gurdy (or wheel fiddle), a cross between a violin and the bagpipes! In contrast, he then performed the popular Drink to Me Only With Thine Eyes (Ben Johnson) and Gather Ye Rosebuds (William Lawes) on the lute.

This was followed by further dances from The English Dancing Master on the alto recorder and dulcimer, an instrument popular at the time of Pepys. Historial Music finished both performances with a rousing jig on the hurdy-gurdy and then answered questions from the public.

Medieval Minstrel has been delighting and informing audiences in historic locations for 20 years, with music from the 13th to 17th centuries, for which he wears authentic hand-made costumes, and plays up to six different instruments."
Gazette & Herald News