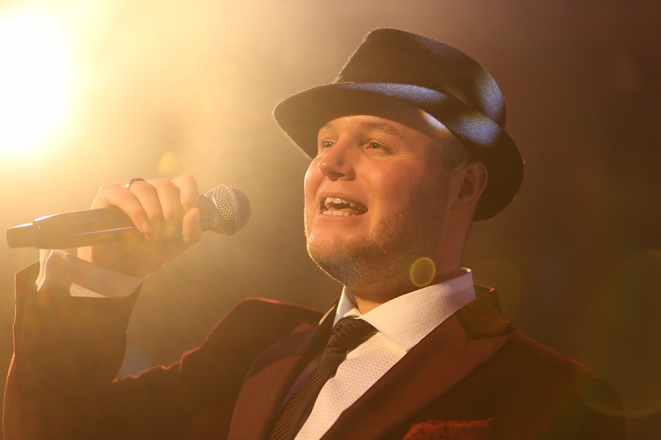 “City Funk were recommended to me by my brother, as they played at his wedding several years ago. In the lead-up to my own wedding, their communication was fantastic, and they arrived and set up so quietly on the day, that I didn't even know they were on stage until I heard a couple of snare hits from behind the stage curtain. The performance itself was absolutely electric. We had so many comments from happy guests saying how good the band was. The timings on our day went a bit out of whack before they started, but the band was flexible and happy to shift things about to make sure we got a great night of entertainment. For only five musicians, the sound is so full and powerful and the volume/mix was spot on. The vocalist is very versatile and handled any of a number of styles with ease. They truly made the day unforgettable. If you're looking for a band for your wedding/event, you honestly couldn't do better than these guys.”

They more than exceeded our expectations!

“City Funk more than played there part in making for us the Perfect Day. They more than exceeded our expectations as they played two fantastic sets comprising of floor fillers that had people from all generations joining in the fun including my new mother in law! Everyone complimented us on the choice of the band and many people said they were the best Party/Wedding band that they have ever seen/heard and I totally agree. Thanks Lads for making it a night to remember for the rest of our lives.... lets hope you are still playing together for our silver wedding anniversary although I will be then 81 so you may have to turn the volume down a bit (or up )! ”

“The band was fantastic and everyone at the wedding had a great time as a result. As good, if not better, than their demo songs. Best wedding band I've heard and would definitely recommend you book them! ”

A big thankyou to you and the rest of the band for your amazing performance at o...

“A big thankyou to you and the rest of the band for your amazing performance at our Faculty Summer Ball…exactly what we wanted…the songs you played were all excellent and had the dancefloor full the whole time! Great value for money!”

City Funk made the evening of my daughters wedding one to remember, the song cho...

“City Funk made the evening of my daughters wedding one to remember, the song choice was exactly what she wanted which assisted in making her day magical.”

Most Alive Network artists travel UK wide and internationally. Get a guide price instantly by clicking the 'get quote' button and entering your event date and location. Make an enquiry and we will liase directly with City Funk to confirm price, availability, and the provide you with a confirmed quote.

Book City Funk's DJ Service to run from 7:30pm to Midnight (when the band are not on stage).

Book City Funk to finish performing at 1am.

Early arrival prior to 6pm Add £96

Cost per hour to arrive before 6pm

"…if you close your eyes you could be listening to the records themselves!...!"

City Funk was set up to provide something they felt was largely missing among function bands – genuine soul! Countless auditions were held to find passionate talented & versatile singers & players, able not only to accurately reproduce the dynamics & feel of people’s favourite old Motown & Soul records, but also sound every bit as at home playing modern chart classics from some of the world’s leading artists.

Never failing to wow audiences, City Funk's performances are energetic & enthusiastic, and with years of experience packing dance floors, guests are guaranteed to be dancing & singing along from the first song to the last!

What really makes the band stand out so much from others though is their attention to detail – they know guests at a function want to hear their favourite songs performed as they know and love them – and no other band sounds as close to the original songs – leading to comments from guests such as "I had to do a double take to check it wasn’t really Stevie Wonder!"

As well as having hundreds of appearances under their belts at private parties, weddings & corporate functions (including numerous household name companies) at some of the nations premiere venues, members of City Funk have toured extensively and recorded with Alvin Stardust, performed with King Pleasure & The Biscuit Boys; played at the world renowned Reading Festival; appeared on live BBC radio sessions and lead singer Clarke Bailey even appeared on ITV’s X-Factor in 2006, making it all the way to Simon Cowell’s infamous ‘boot camp’!