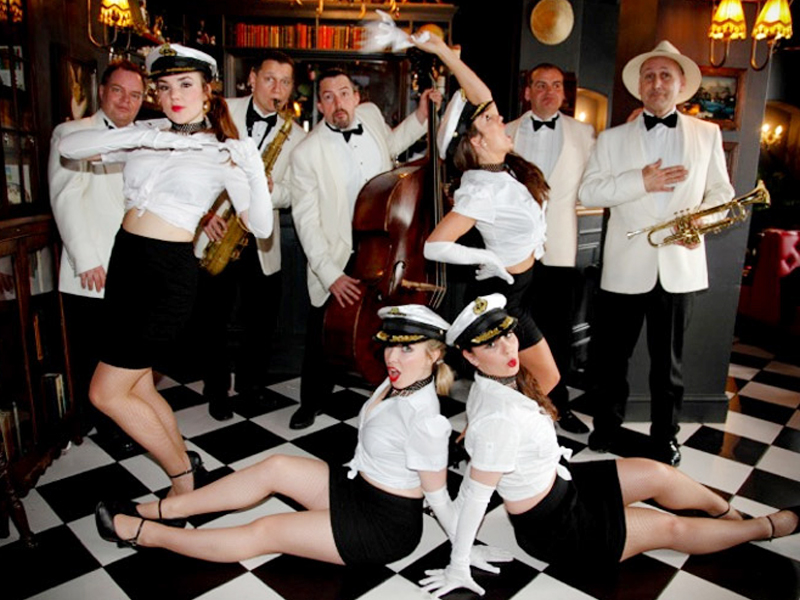 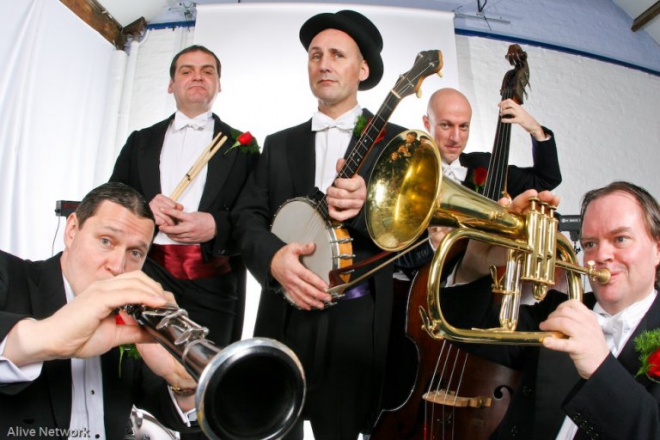 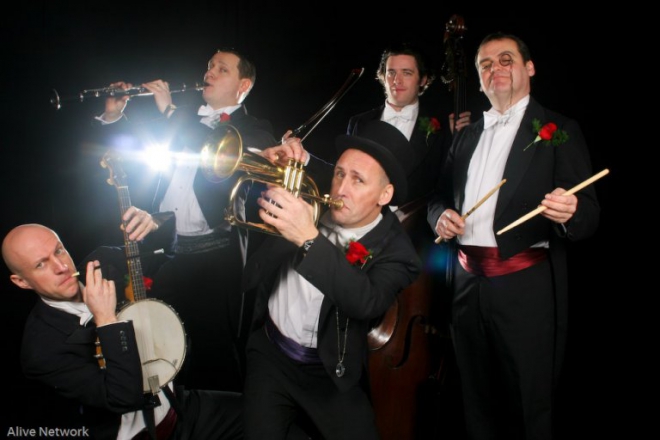 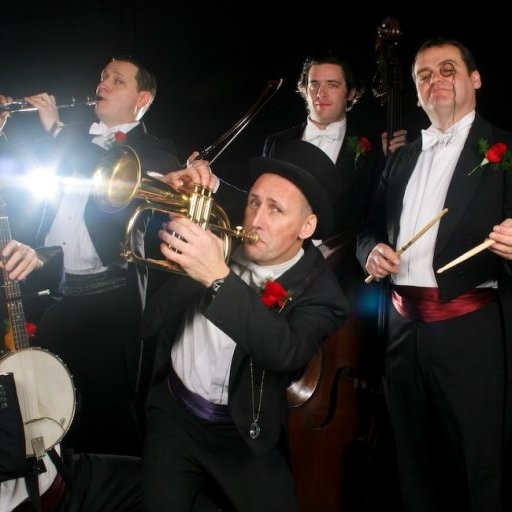 If Covid affects your event plans, we will offer 100% deposit credit to be used against future bookings.

“The Charleston Swingers were fantastic.”

The Charleston Swingers were fantastic.

“The Charleston Swingers were fantastic and to quote their first number (as requested) Too marvellous for words. Professional and enthusiastic, they gave a faultless performance and without hesitation recommend them to anyone looking for musicians for a 1920s event. Exceptionally happy with them and they exceeded expectations. It was the perfect setting and event for the band and they were a great hit with the guests.”

The Charleston Swingers were excellent. These guys are true professionals and th...

“The Charleston Swingers were excellent. These guys are true professionals and their performance was second to none - they kept the dance floor full for the whole evening! Their repertoire appeals to all age ranges and their performance simply reeks with class. Weeks after the wedding and everyone is still talking about the Charleston Swingers! We chose not to have any filler music between sets and this worked really well – after all the CC’s are the main attraction! Thanks again to the band for such a great evening. Steven Bryan”

Paul many thanks. I thought the band were just fabulous and cannot fault any ar...

“Paul many thanks. I thought the band were just fabulous and cannot fault any area of their performance and set up etc. I just loved them as did all of the guests. Thank you so much. Amanda ”

Hi Nick, I just wanted to let you know that the Charlston Swingers were a re...

“Hi Nick, I just wanted to let you know that the Charlston Swingers were a real hit at our wedding! Every one loved them; yound and old. I think they really made the day. They were lovely guys too. Many thanks ”

Price from £1,282 + travel from Greater Manchester

Most Alive Network artists travel UK wide and internationally. Get a guide price instantly by clicking the 'get quote' button and entering your event date and location. Make an enquiry and we will liase directly with Charleston Swingers to confirm price, availability, and the provide you with a confirmed quote.

For 2 dancers to meet and greet, perform 3 exhibition dances, a 15 minutes optional dance lesson & 20 minutes party starting with guests. Travel expenses to be added at time of enquiry

For 3 dancers to meet and greet, perform 3 exhibition dances, a 15 minutes optional dance lesson & 20 minutes party starting with guests. Travel expenses to be added at time of enquiry

For 4 dancers to meet and greet, perform 3 exhibition dances, a 15 minutes optional dance lesson & 20 minutes party starting with guests. Travel expenses to be added at time of enquiry

For 5 dancers to meet and greet, perform 3 exhibition dances, a 15 minutes optional dance lesson & 20 minutes party starting with guests. Travel expenses to be added at time of enquiry

Pre-mixed DJ package until midnight (on standard evening bookings where accommodation is not required). The package includes a play list of the clients preferred songs and styles of music, compiled in advance of the event in conjunction with the client, and band members manning/ making basic announcements.

Kidnapped from The Savoy Ballroom in 1929 by aliens the Charleston Swingers reappeared on the streets of Manchester in 2007 having aged not one jot still playing their infectious and quirky 1920's hits.

Oscar (singer and trumpet) Chester Walmsley (drums), Lord Wetherall of Chorlton (piano), Burley Martell (double bass), and Milton Colehill (sax and clarinet). You'll have to dance to them! Their affectionate 1920's pastiche delights and delects its way through an era of prohibition, speakeasies and mob violence; when the jitterbug was scandalous, flappers bobbed their hair and raised their skirts and a damn good time was to be had by the reckless and young at heart.

The Charleston Swingers put the 'art' in party and the 'Charlie' in Charleston!

Strike up the band! Let’s misbehave! Everything is hotsy totsy now!

(The writer takes no responsibility for the truth of historical facts, neither do names bear resemblence to anyone other than fictitious characters but the music is damn good!)

The Charleston Swingers performance is an affectionate pastiche of 20’s and 30’s music, in character and in costume. Oscar, Lord Wetherall of Chorlton, Burley Martell, Milton Colehill and sometimes Chester Walmsley, play upbeat, high energy songs and the odd heartfelt ballad, with a decidedly humorous spin and a driving mixture of American, British and Caribbean influences reflecting the unique spirit of the 20’s: music from phonographs, Broadway shows and vaudeville by Jerome Kern, Oscar Hammerstein 2nd , Gershwin , Richard Rodgers and Lorenz Hart, performed and made famous by Al Jolson, Al Bowly, Bing Crosby, Ambrose, Paul Whiteman and the many hotel ballroom orchestras of the times.

Enjoy this visit to an era of wonderful nonsense, quirky original music and cheerful entertainment.

Please also see The Sinatra Swingers - a versatile and talented five piece Jazz band cover a large repertoire of Sinatra standards, Latin, Blues and Jump Jive. With their high energy and stylish covers, this group is perfect for any event, even borrowing the Charleston Swingers' outfits should you require a great themed party!

References: CHARLESTON SWINGERS have had years of entertaining fabulously as The Chordaires, now The Sinatra Swingers.