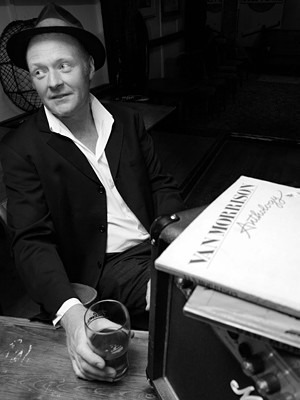 Most Alive Network artists travel UK wide and internationally. Get a guide price instantly by clicking the 'get quote' button and entering your event date and location. Make an enquiry and we will liase directly with (Van Morrison) Vintage Van to confirm price, availability, and the provide you with a confirmed quote.

Van Morrison’s repertoire has touched many generations and left thousands of fans sometimes bemused by ‘The Man’ but enthralled by his music.

A trained Actor, she has appeared in West End and Touring theatre, with many theatre credits and featured on ITV's 'The Bill'. She currently runs all female band 'Ruby's Cute' and teaches singing and music. Charlotte has played and toured with many established top-line artists, and is an established teacher of music and voice work, the best in the West.

Keyboards/Vocals, Thomas Hughes
A talented self-taught musician Tom has toured extensively, European and Transatlantic appearing at concerts, festivals and venues big and small. He lives and breathes music, producing and studio engineering for many Westcountry acts, when he isn't playing live.

His original music project TRIOPS, features the use of film and bespoke special effects, and their concerts are unpredictable psychedelic adventures, where the avant-garde and the absurd collide in the outer reaches of the galaxy.

Guitar/Vocals, Dan Anderson
Front man and astonishingly talented guitarist of MOTEL 6, Dan has an exceptional touch, and a versatility that brings real power to any band he features in. M6 has featured at Blues festivals, gigs and venues for the past decade releasing several CD collections of their original material and building a steadily increasing following. Dan has appeared in the US and holds his own with the best in the business.

Chris Lonergan (Bass/Vocals) & Ady Milward (Drums/percs/Vocals)
These two legends have played live over 1000 times together!
Their association has seen them as the backbone of THE BEN WATERS BAND, the Swing in 'The Custers Last Blues Band' and have appeared and recorded with many names over their long association including: Dave Gilmour (Pink Floyd), Andy Sheppard, Art Tatum, Charlie Watts and Mick Taylor (Rolling Stones), Billy Bragg, Gordon Haskell and Robbie McIntosh (Pretenders, Paul McCartney, Norah Jones, John Mayer).

'VINTAGE VAN' represents a coming together of some real talent and a high level of musicianship, which is a pre-requisite to capture the subtlety and nuances of Van The Man's music.

Their shows are being very well received and are proving highly enjoyable for the band and audiences alike.