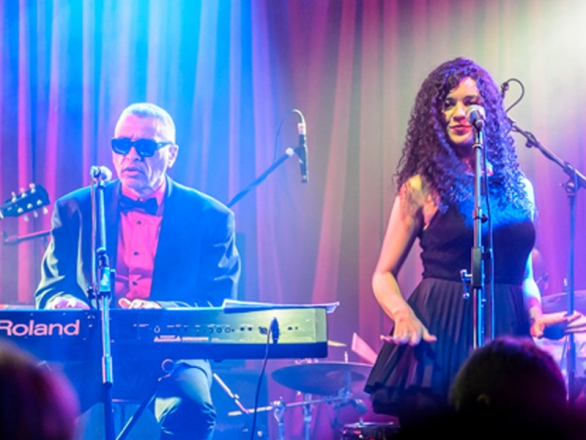 The Ray Charles Band brings you the ultimate tribute act; paying homage to Rhythm & Blues pioneer and originator of the Soul Music genre. Performing an impressive repertoire from his prolific career, The Ray Charles Band's ability to capture the iconic sound and energy of Ray Charles is second only to the man himself!

Liverpool based The Ray Charles Band prove to be much more than a run of the mil...

“Liverpool based The Ray Charles Band prove to be much more than a run of the mill tribute band. Russell Christian, famed for Liverpool band The Christians, fronts the performance and embodies all the qualities of the late musician, whilst adding his own unique flair to the instantly recognisable songs. Supported by the brilliant backing band and backing singers, this is a band you do not want to miss!”

“They draw you into their eclectic mix of personality and style-then its too late to look away. you are hooked left right and centre. Fun,Slick,but ALWAYS cool!”

“Sultry, sophisticated and uplifting old school soul and blues. The Ray Charles Band belt out gorgeous arrangements of glamorous classics that are guaranteed to get you dancing!”

The Ray Charles Band are a brilliant band, they're performance on the Liverpool ...

“The Ray Charles Band are a brilliant band, they're performance on the Liverpool Bandstand drew a great crowd and had all ages up and dancing! It was a true celebration of Ray Charles' wonderful music by talented performers. We look forward to having them perform again.”

Most Alive Network artists travel UK wide and internationally. Get a guide price instantly by clicking the 'get quote' button and entering your event date and location. Make an enquiry and we will liase directly with (Ray Charles) The Ray Charles Band to confirm price, availability, and the provide you with a confirmed quote.

With his soul soaked voice and amazing instrumental ability on the piano and saxophone, Russell’s ability to capture the iconic sound and energy of Ray Charles is second only to the man himself.

The band behind the big sound of A Ray Of Charles is a powerhouse of veteran instrumentalists from the Liverpool music scene, who have played extensively amongst the regions most exciting and ground-breaking bands.

The band’s musicians have an immense catalogue of experience; having performed internationally in America, Asia and Europe, as well as recording and performing alongside such legends as Paul McCartney, James Brown and Barry White amongst many others.

The Ray Charles Band perform an impressive repertoire from the prolific career of Ray, as well as a selection of other classic songs from the genres of soul, stax, motown, rhythm & blues, funk, cult cinema and imaginative remakes of modern classics.

After booking, speak directly with The Ray Charles Band.