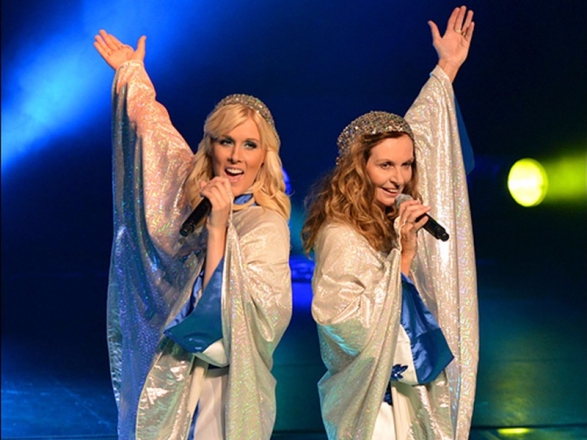 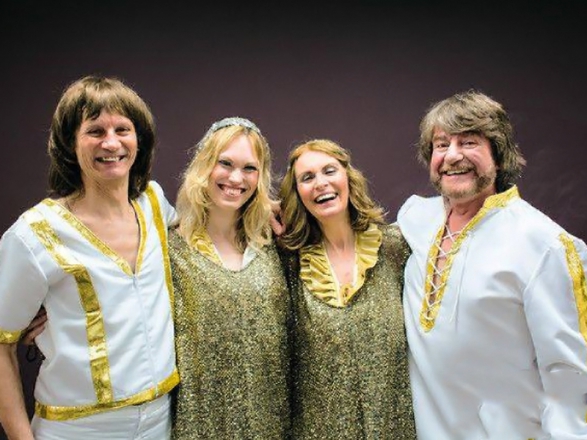 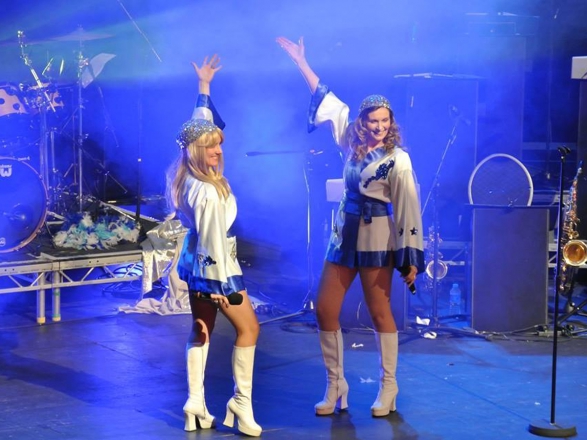 The UK’s top International ABBA tribute who has performed over 4000 shows in 40 countries world wide! Expect dazzling costumes, excellent choreography & great authentic harmonies! Just back from their 12th tour of Korea & the ONLY Abba band to perform in Vegas!

Selction of Abba's hits including:

Tracks 1 – 31 performed at most gigs.
Tracks 1 – 47 for the theatre type gigs and at popular Abba weekends
Tracks 48 – 84 performed for the Abba fan clubs that know all the album tracks and do not want to hear the popular Abba songs.

“Good contact made prior to the event and likes and dislikes confirmed. Arrived punctually and set up quickly, with our party plans incorporated into their set up location. Great sound and at just the right volume for our party. Great costume changes and routines and just very pleasant people to meet. I highly recommend them and if you do book them, you will not be disappointed. All our guests loved them!”

A memorable night for everyone

“Great tribute band with very good voices and all the outfits to suit. Made a 60th party into a memorable night for everyone. The team arrived early to set up and were excellent value for money. Many thanks”

Thank you for the music - Absolutely brilliant!

“Abba Authentic were absolutely brilliant. They made our party even more alive and fun. From the moment the reveal curtain was opened the music, the dancing and the singing transformed us all. Everyone was enjoying themselves, despite age, and the time just flew. So to ABBA Authentic we say, "Thank you for the music, the fun, the dancing ; it was a truly memorable day.”

If you love ABBA look no further

“If you love ABBA look no further. The ladies loved dancing to great songs by ABBA and the gents liked looking at ABBA...Enough said!”

Simply superb! They created one of the best night's ever at the golf club. Truly...

“They couldn't do enough to be helpful, flexible, professional. They created one of the best night's ever at the golf club. Truly professional in every aspect.”

Most Alive Network artists travel UK wide and internationally. Get a guide price instantly by clicking the 'get quote' button and entering your event date and location. Make an enquiry and we will liase directly with (ABBA) ABBA Authentic to confirm price, availability, and the provide you with a confirmed quote.

With the PA I break it down depending on the size of the gig: We use our 2K system for gig's up to 200 guests and our 4.5K rig for 450 plus. We can and do hire bigger PA systems in when necessary.

*All line-ups come with a dedicated sound engineer. Ensuring you have the best sound at your event.

ABBA Authentic are the original Abba duo established in 1995. The idea of an Abba duo was conceived by vocalist Kim Graham - bringing the fantastic sounds and harmonies of Abba to venues that do not have the room or budget for a full Abba tribute band. (Due to demand we are also available as a band!)

Such is their success that they have performed all over the world at over 4000 gigs! From large outdoor concerts (biggest 100,000) to live TV work plus turning on Christmas lights performing radio jingles etc - the list really is endless.

Having performed in 5 of the 7 Continents, over 40 countries we can use the term International Artistes Performed in Vegas Imperial Palace Hotel & MGM and quite a few more.
Just back (January 2016) from our 12th tour of Korea: Performed at the Seoul indoor Olympic stadium, and Live Prime KBS TV over 6 million audience.

We have performed in just about every type of venue, but still have our feet firmly on the floor, we welcome the local village hall and very flexible for all venues large or small.

We have worked with some of the biggest names in Show Biz both in the UK and throughout the world. Far too many to list.

THE SHOW
ABBA Authentic are full time professional performers. They can cover 60 of Abba’s fantastic tracks and up to 15 different costume changes (but not on the same night!). They always endeavor to bring the best show to every venue.

ABBA Authentic are completely self-contained with full PA & lighting rigs and travel with their own engineer as well as an on-stage 16' x 12' back drop if required. Background music mainly from the 70's and 80's can also be provided between sets. All electrical equipment is PAT tested and the duo have full public liability insurance. Also Risk Assement, all can be emailed in advance.

THE GIRLS
Kim Graham (Frida) conceived the idea of an Abba duo in 1995, being a big Abba fan! Kim has always been a professional vocalist. She started her career touring with various bands in the UK & Europe and has worked with some of the top musical directors and bands in the world. She also cruised the world on various liners including cabaret on Cunards QE2.

Kelly Vallence (Agnetha) started her training with Lansford Roberts of The Nice Opera Co. and The Lee Strasburge Theatre Inst London. Gilda has worked some of the top theatres in the world, most recently touring with The Rat pack. Gilda has performed in numerous top productions as lead singer notably London’s Talk of the Town. Also as an amazing dancer Gilda has cruised all the main liners working with the top names in show biz. Gilda is one of the UK's top singer & dancer also a Mensa member! Brains as well as beauty!

THE BOYS
Mark Dawson: (Bjorn) one of the UK’s greatest session guitar, acoustic guitar and ukulele players, also not bad on the vocals! Mark is in much demand as a performer we are so thrilled to have him in our band.

Ralph Raison: (Benny) Keys, piano and excellent vocals like Mark Ralph is in much demand, he has worked literally all over the world as a vocalist. Ralph plays sax in our covers band.

Tom O. Mitchell. Drums. Tom is a UK based session drummer and drum educator. He has been teaching drums professionally for over 10 years and playing for 15 years. He studied Music at West Kent College in Tonbridge before going on to tutor a handful of private students under the name of T.O.M Drum Tuition. Tom has studied with some of the country's top educators and drummers including: Craig Blundell, Colin Woolway & Boris Le Gal and he runs one of Kent's biggest drum schools, DrumWise.

Tom has worked with a variety of artists/bands including:

After a very successful 2004 in Las vegas we have been re-booked every year since! at the World Famous Legends stage at the Imperial Palace Hotel Las Vegas.

APPRAISALS
Abba Authentic - the first Abba tribute act in the world to have played on the strip in Las Vegas
-The Stage, April 2004