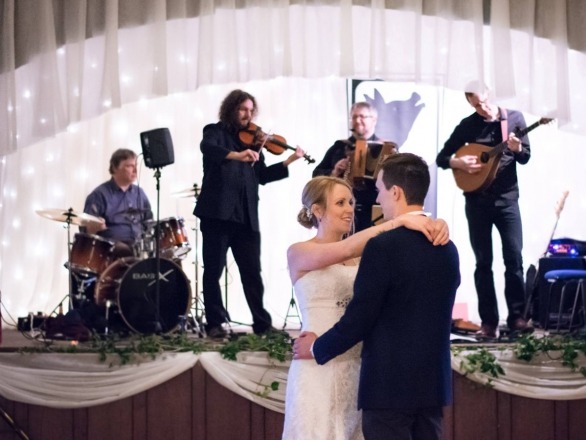 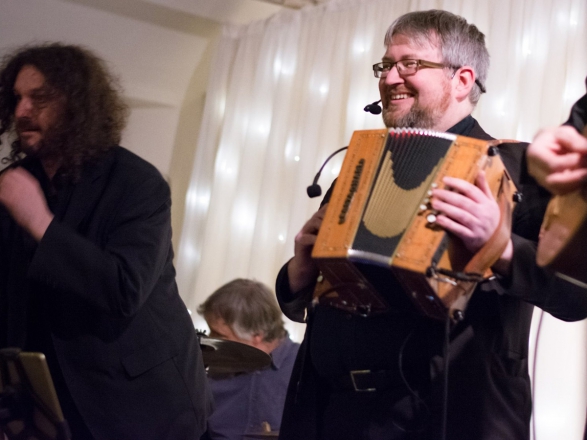 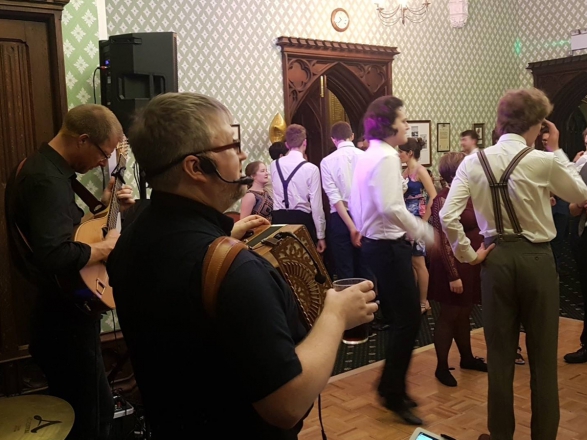 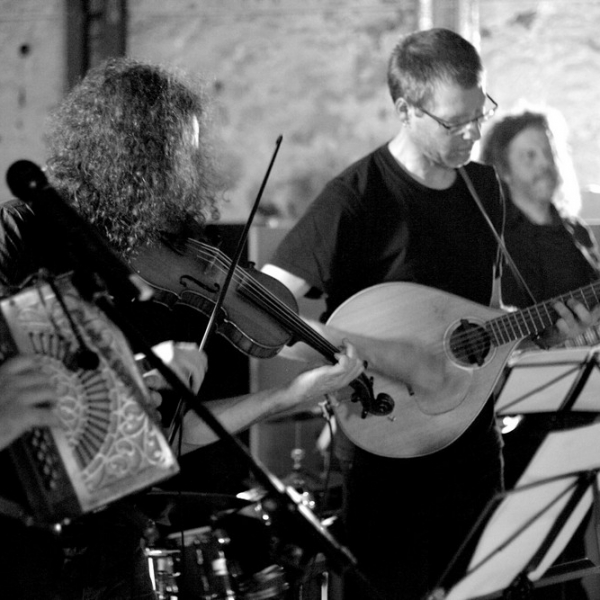 The Sandpiper Band are amongst the UK's finest ceilidh bands. They perform the most exciting, entertaining and energetic ceilidhs for weddings, parties, celebrations & corporate events. Previous engagements include performing at festivals and events in Europe, North Africa and beyond.

“These guys were fantastic, we really enjoyed the music and they really got everyone involved, up and dancing, great range of dances so everyone could participate somewhere. They were also super friendly and really tried to accommodate what we wanted! I don't have a bad word to say.”

I can’t recommend these guys enough

“What can I say about this band. It was the perfect way to end our perfect wedding day. Those who wanted to dance, danced. Those usually too cool to dance, danced and those unable to dance, hindered by frailty or alcohol tapped their fingers and stamped their feet – everyone enjoyed themselves and everyone remarked on how good Sandpiper were. What the crowds weren’t aware of though was just how professional Ben had been in the lead up to the wedding day. Always quick to respond to enquiries and nothing was too much trouble for him. Even when a last minute panic set in over our own playlist, Ben was only too happy to assist and save the day. I can’t recommend these guys enough; if you have an upcoming soirée on the horizon, then get Sanpiper booked. Great musicians, great entertainers, great professionals! Thanks guys, truly money well spent!”

A hell of a surprise party!

“Ben and his band provided a hell of a surprise party for my mum’s 60th! Their ability to integrate with our extended friends and family, both in terms of the ‘surprise’ moment, the food and the speeches was superb, and really meant we were able to make it personal to mum. She hasn’t stopped beaming since, and commented that having a ceilidh meant that we could enjoy the dance on our own terms, and also chat to reunited friends and family with some excellent background music. From young to old, everyone had a blast!”

These guys were just fab

“These guys were just fab as entertainment for our wedding day. When you have a mix of young, old and young at heart, it’s so hard to please everyone, but please everyone they did. With their infectious beats, comedic interludes and toe tapping tunes, Ben and co brought energy, fun and laughter to the dance-floor. The dress code for guests was an optional touch of purple in memory of my mum, and I was really touched that they turned up in purple ties too. What lovely guys! We had a great time boogieing into the early hours as we added on a funky disco too. Thanks Sandpiper! You’re Priceless!”

Positive feedback from the delegates

“Thanks very much to Sandpiper for playing at the EAUC Conference event at Lancaster University last week. The Ceilidh was excellent and the feedback from delegates was that they thoroughly enjoyed your performance. Many thanks indeed for helping to make a really good evening.”

Price from £898 + travel from Lancashire

Most Alive Network artists travel UK wide and internationally. Get a guide price instantly by clicking the 'get quote' button and entering your event date and location. Make an enquiry and we will liase directly with Sandpiper to confirm price, availability, and the provide you with a confirmed quote.

A laptop using basic DJ software with 1000's of songs manned by a member of the band taking requests and making basic announcements.

suitable for up to 350 guests

Ben Farmer is considered a “highly talented & versatile accordion, melodeon, keyboard, bass and ukelele-ist, music teacher and workshop leader”(AndyHornby.net), who's been playing folk music professionally since the age of 14.

He is regarded an ‘expert’ in melodeon, accordion and ukulele playing and teaching, with Folkus (Folk Arts North West), More Music and Charanga among others. “Formidable squeezing” Lancaster Jazz Festival 2014

Ben currently plays regularly with Gobble de Gook and SoLatino, as well as doing guest appearances with many others and leading the thrilling ceilidh and concert band: Sandpiper. Ben also acts as caller for the band.

He has held down many bass chairs, from 18 piece big bands and African dance bands to jazz combo’s and crazy Balkan bands and many points in between. Dave currently also plays bass in the Metermen (Meters and Booker T tunes), Gobble De Gook (post-Zappa French ska-pop) and co-leads the Initiative - big slabs of dirty, funky groovejazz.

He is a bit of an bass-fx pedal geek. In his spare time he teaches music and leads jazz groups and workshops for ages 8 to 80 and beyond.

Paul Ferguson plays fiddle and as well as playing with Sandpiper also plays in The Balkanics and a Lancaster-based Irish trad quintet. He learnt to play in pubs in the west of Cumbria, the west of Ireland and the west of Brittany as well as at various festivals across the UK and Europe.

Although his style is predominantly influenced by the Irish and Scottish traditions he is also interested in the rhythmic possibilities offered by the time signatures found in East European trad dance music.

Paul Beevers - guitar and bouzouki - has been active on the Lancaster folk scene for many years.

He has played guitar and bouzouki in numerous traditional ceilidh and dance bands, and currently plays bass in Baksheesh (groove-based Balkan tunes) and bouzouki/ mandolin in a new Lancaster- based trad quintet, as well as comprising part of the powerful rhythm section of Sandpiper.  He also teaches music as a day job.

Tony Harrison started on the cornet at primary school. He found the drums and from the age of 12 he was performing in hotels in Blackpool for dancing. Tony kept an open mind, and played in a wide range of styles that include swing, brass band, thrash metal, concert band and theatre pit amongst many others.

Tony has a degree from Salford University in Popular Music and Recording and spent some years working with TV stars on shows, cruises and holiday seasons. He has spent the last 18 years as a drum tutor for Lancashire Music Service whilst remaining very active on the live music scene across many genres.

After booking, speak directly with Sandpiper.