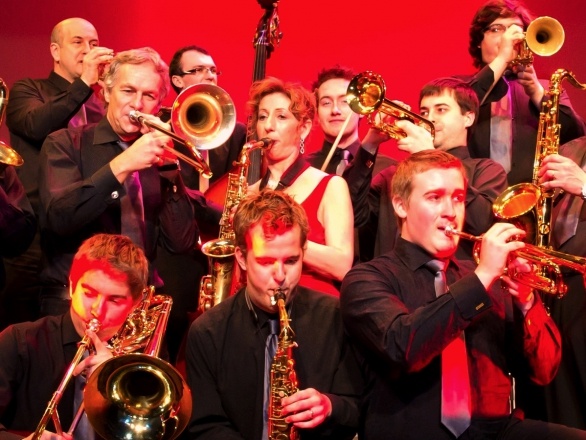 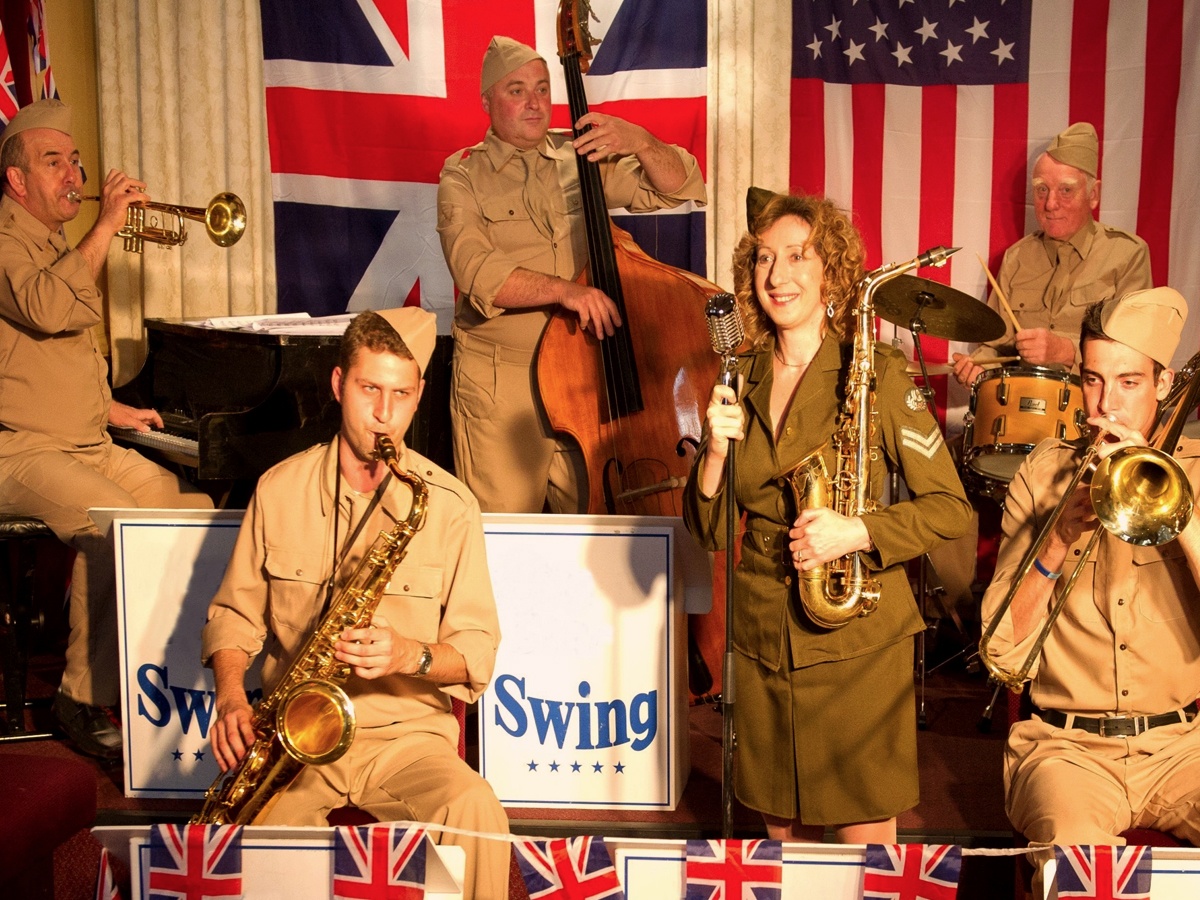 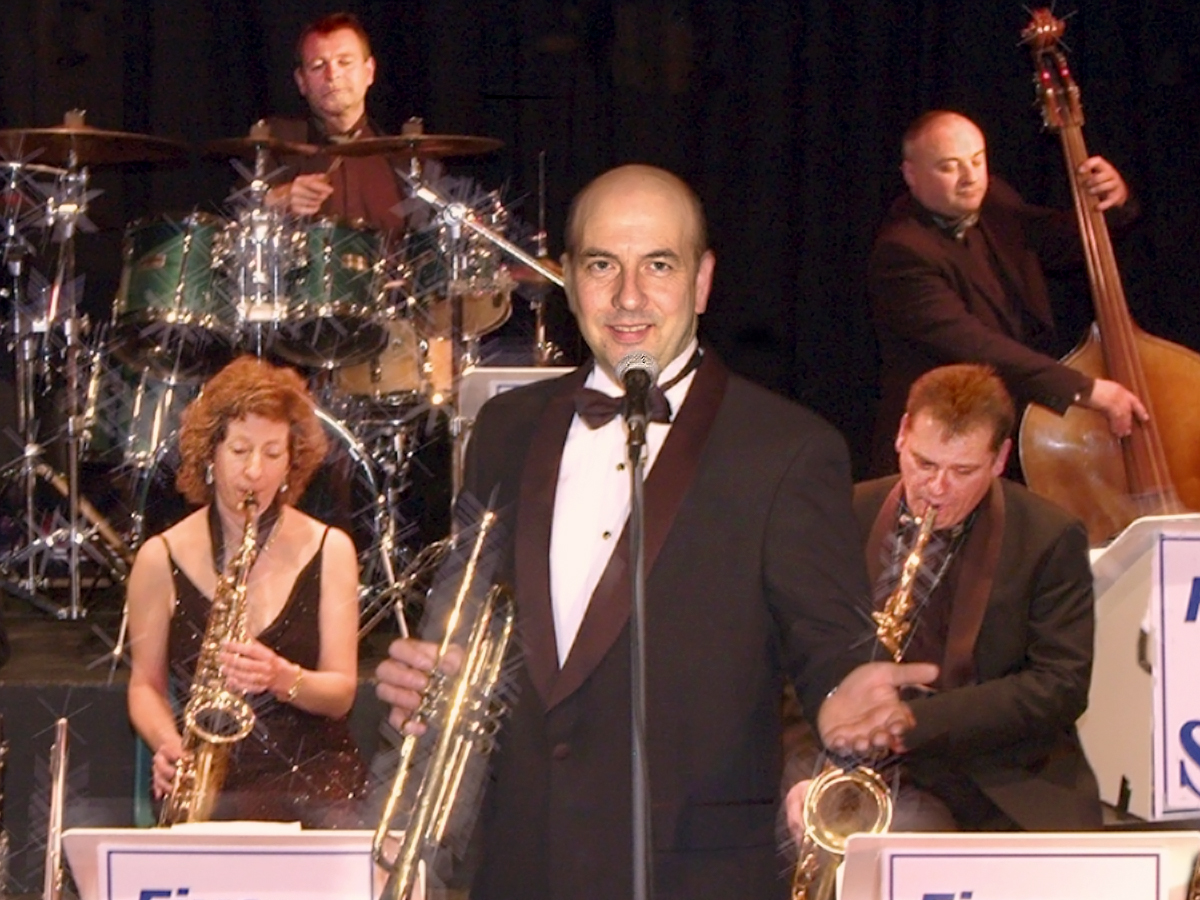 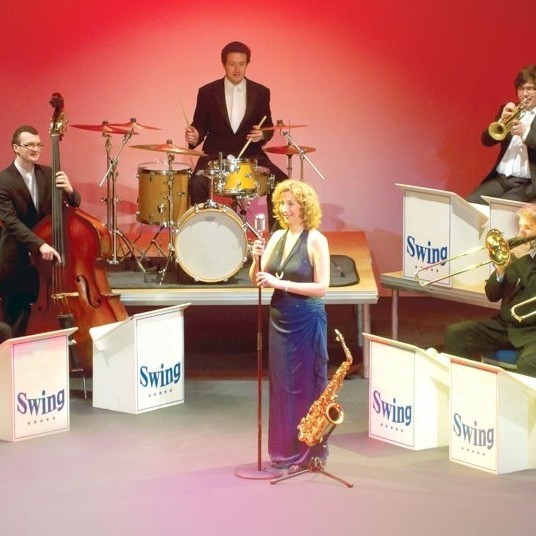 “All band members were polite, professional and extremely friendly!”


Male Vocal
Mr Bojangles
It Had To Be You
Something Stupid
I’ve Got You Under My Skin
Were or When
All The Way
Fly Me To The Moon
The Girl From Ippaneima
Witchcraft
New York, New York
You Make Me Feel So Young
The Lady Is a Tramp
Chicago
Come Fly With Me
My Kind of Town
I Get a Kick Out of You
How About You
Nice and Easy
Strangers In The Night
King of the Swingers
Unforgettable
Bad Bad Leroy Brown
Something Stupid
Allright OK You Win
The Way Youy Look Tonight
That's Life

Female Vocal
Don't Get Around Much..
Almost Like Being In Love
Orange Coloured Sky
Get Happy
Paper Moon
A Foggy Day
Fly Me to the Moon
Fever
Don’t Sit Under The AppleTree
Chattanooga Choo Choo
The Very Thought Of You
Perfidia
I Know Why
That Old Devil Called Love
All of Me
Cabaret
Bye Bye Blackbird
Cany Buy Me Love
Fever
Dream A Little Deam
Glenn Miller
In the Mood
Don’t Sit Under The AppleThree
American Patrol
Chattanooga Choo Choo
Pennsylvania 65000
String of Pearls
Moonlight Serenade
Little Brown Jug
(Glenn Miller Contin’)
Tuxedo Junction
Perfidia
I Know Why

All band members were polite, professional and extremely friendly!

“Arrived on time, set up without any problems and appeared to have everything under control. Definitely took the stress out of it for me! Chris and all band members were extremely polite, professional and extremely friendly!”

“We just wanted to say thank you so much for your help in making our wedding on Good Friday such a great day. I'm sorry to have only spoken to you fleetingly but can safely say your sets were one of (if not the) highlights of the wedding. A complete dance floor filler and we had so many comments about how much people enjoyed your music. If you ever need any recommendations from 'real life couples' just give me a shout and I'd be happy to help. Many thanks and best wishes to you and the rest of the team.”

A good sized and appreciative audience at Fleetwood's Marine Hall were well ente...

“A good sized and appreciative audience at Fleetwood's Marine Hall were well entertained by a band that certainly lived up to its name of Prestige Swing. Led by Pianist/Trumpet and Vocalist Chris the band played a excellent selection of favourites made famous by such as Glen Miller, Count Basie, Woody Herman, Frank Sinatra etc. Although only 11 musicians they were all masters of their craft featuring many fine soloists, particularly bass player Steve. Simone was not only a good vocalist but a very talented saxophonist who at one time had been lead alto wit the Ivy Benson Orchestra. Featuring numbers like In The Mood, Woodchoppers Ball, Chicago, Georgia etc the band had the audience foot tapping along then cheering for more at the end of a very entertaining evening.”

I just wanted to pass on my thanks and appreciation from both myself and all my ...

“I just wanted to pass on my thanks and appreciation from both myself and all my team here at Xero and was hoping you could please express our thanks to the rest of your band. Everyone thoroughly enjoyed you playing at our event the other night and are still raving about you guys as we speak so much so you even agreed to an encore on the night. You had everyone up dancing from the minute you started playing and I for one know that my feet were killing me come midnight which is always a sign of a good night dancing. I honestly cannot thank you all enough for attending our event and putting on a marvellous show. We will certainly be keeping you in mind for any other events we plan to hold in the future and wish you all the best with everything you do. Many thanks!”

“I honestly cannot thank Prestige Swing enough and would like to pass on my appreciation from both myself and all my team here for their fabulous performance at our recent company function, everyone thoroughly enjoyed themselves and people are still raving about it to this day. The quality and professionalism of their performance exceeded everyone's expectations, the band really took it to the next level from the minute they arrived. Our event was hosted around a 1940s theme which the band kindly agreed to dress up in costume for. Their performance and overall choice of music was very upbeat and it really helped capture the entire theme. The band had everyone up on their feet dancing from the minute they started playing, I for one know that my feet were killing come midnight which is always a sign of a top night dancing. We will certainly be keeping Prestige Swing in mind for any other events we plan to hold in the future and we wish the band all the best with everything they do and ho...”

Price from £1,208 + travel from Hertfordshire

Most Alive Network artists travel UK wide and internationally. Get a guide price instantly by clicking the 'get quote' button and entering your event date and location. Make an enquiry and we will liase directly with Prestige Swing to confirm price, availability, and the provide you with a confirmed quote.

Highlights
* Exciting Big Band in a compact 5 - 11 piece format
* Band credentials include work with BBC Jazz FM and BBC TV
* Songs in the repertoire include songs from Glenn Miller to Sinatra
* Male & Female vocals front this top band for an authentic Big Band sound
* Available from an 5-11 Piece Band
* Fully self contained with a lighting rig and PA as standard
* Available UK wide Prestige Swing are recognised as one of the most versatile and accomplished Jazz and Swing bands in the UK. Whether performing for dancing listening or major theatre productions you can be sure that your event will go with a swing!
* 1940's Glenn Miller U.S Army uniforms worn by band for 1940's events.

Style is added to every performance from an exciting repertoire featuring songs from Frank Sinatra Natalie Cole Glenn Miller and Jazz favourites through to modern day artists such as Robbie Williams Jamie Cullum and Jools Holland.

The band features excellent vocalists and muscians experienced in all types of functions and stage shows creating a professional and vibrant sound of the Big Band Era!