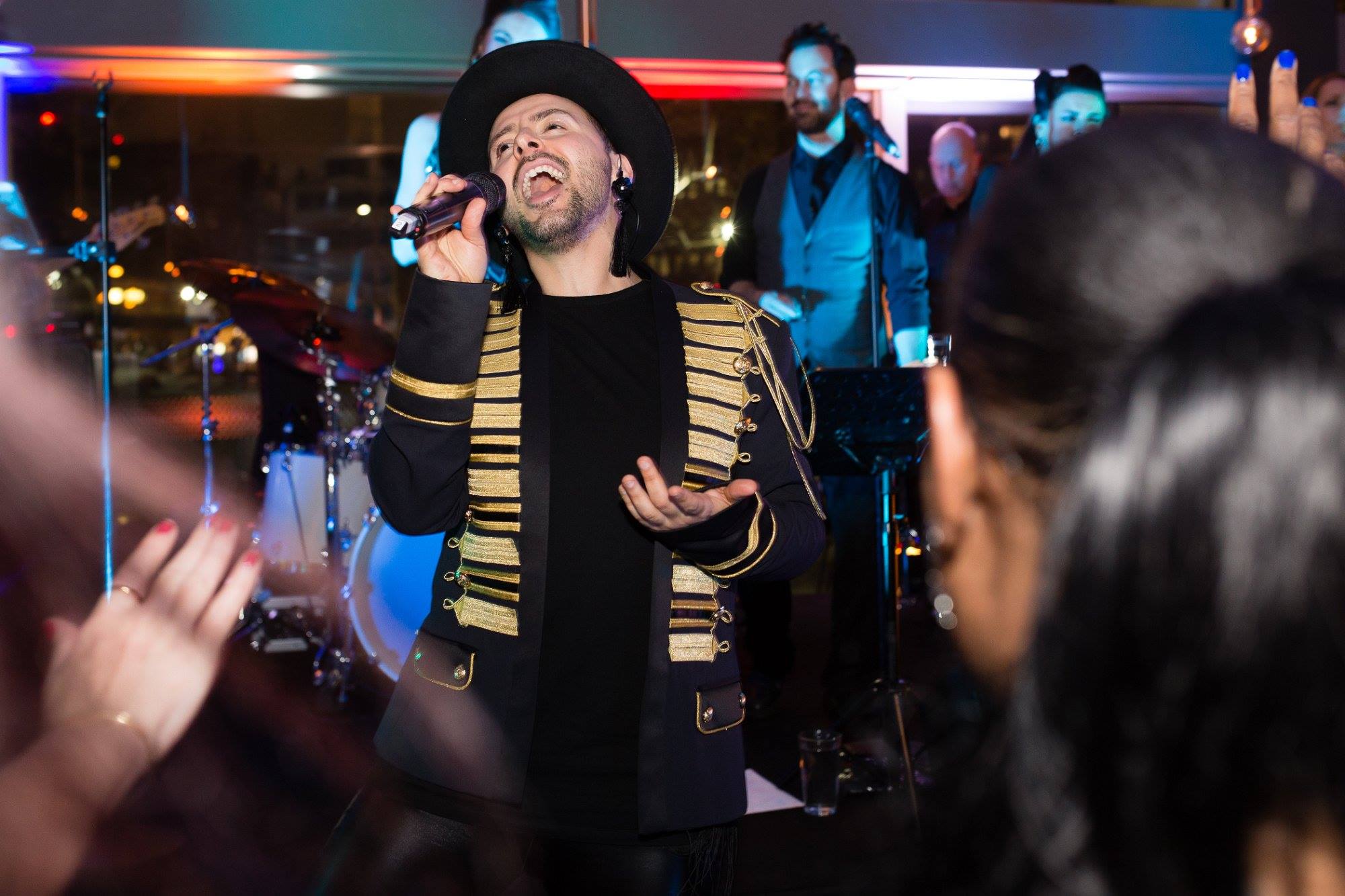 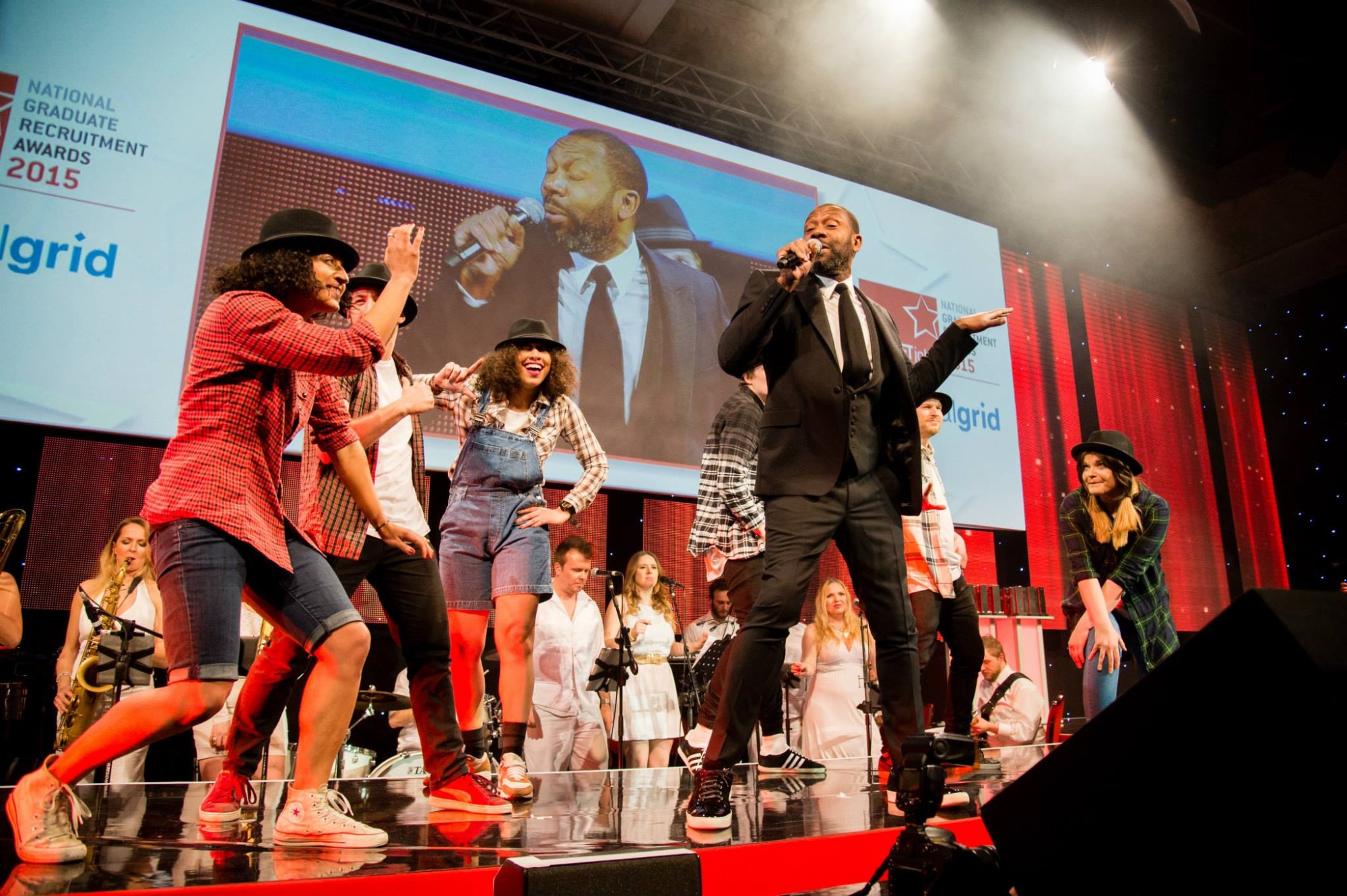 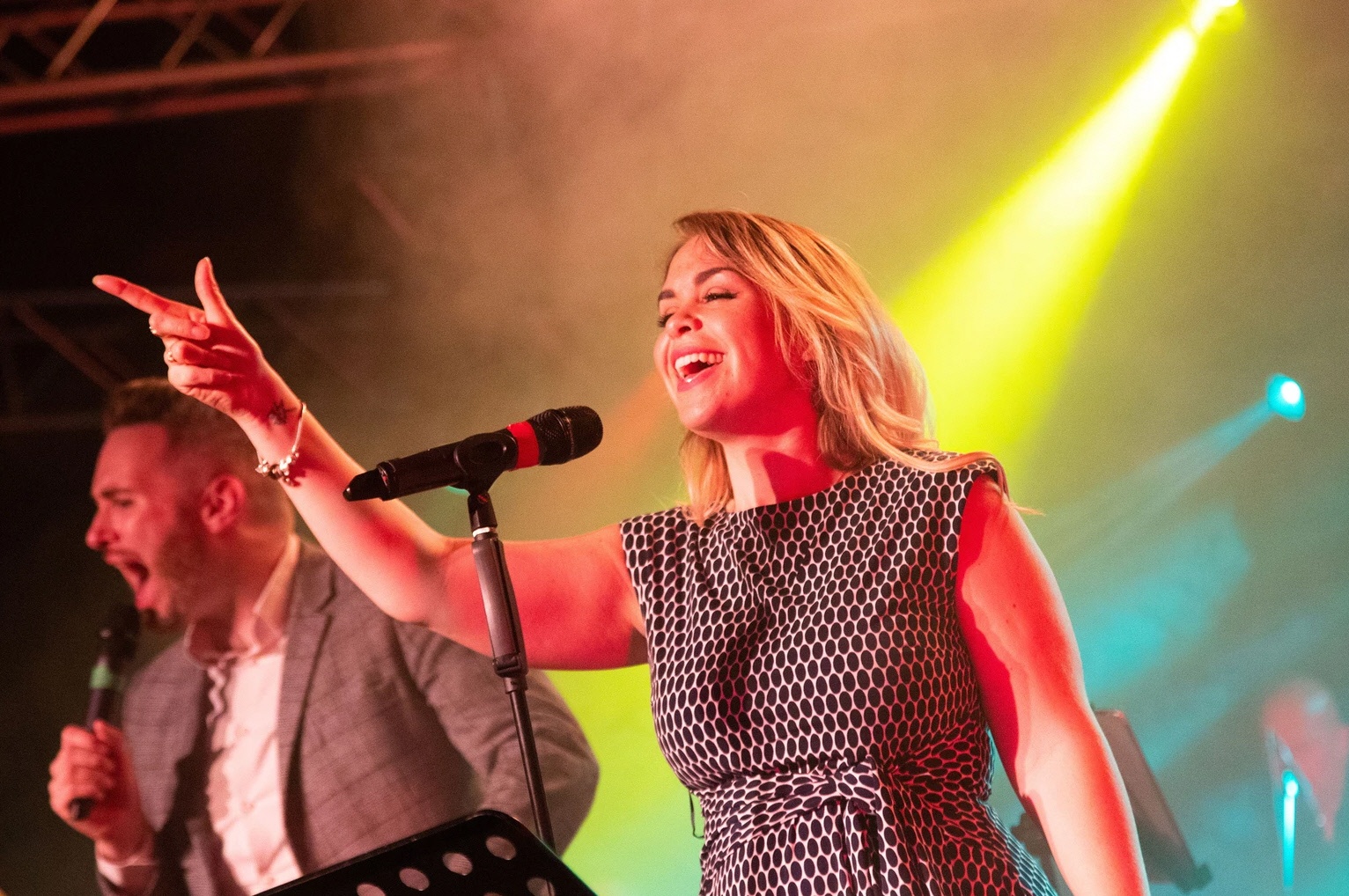 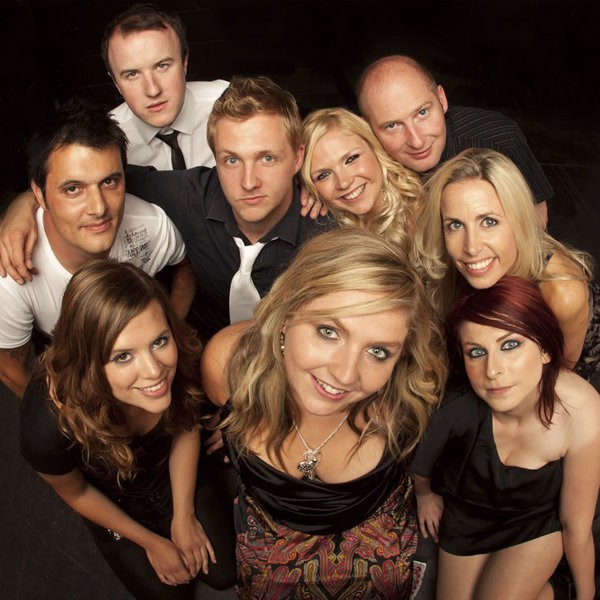 How do you fancy booking the band that performed to 300,000 in Hyde Park for the Royal Wedding? Apollo Groove have fast been named the UK's top live band for Weddings, Corporate Events and other parties. Christmas songs available! Video Online!

“The dance floor was full all night, guests were dancing amongst the tables because there was no space left on the dance floor!”

80's Pop
Love Shack - B52s
Walking on Sunshine - Katrina and The Waves
Hot Stuff - Donna Summer
Footloose - Kenny Loggins
Bad - Michael Jackson
Beat It - Michael Jackson
Working Day and Night - Michael Jackson
PYT - Michael Jackson
Don't Stop Til You Get Enough - Michael Jackson
Off The Wall - Michael Jackson
Club Tropicana - Wham
500 Miles - Proclaimers
Living on a Prayer - Bon Jovi
Jump - Van Halen
When The Going Gets Tough - Billy Ocean
Wake Me Up Before You GoGo - Wham!
You're the One That I Want - Grease
Don't Stop Me Now - Queen
Crazy Little Thing Called Love - Queen
Rockin All Over The World - Status Quo
Gold - Spandau Ballet
Time of My Life - Dirty Dancing
My Sharona - The Knack
All Night Long - Lionel Richie
The One and Only - Chesney Hawkes
Rio - Duran Duran
Poison Arrow - ABC
Express Yourself - Madonna
Like a Virgin - Madonna
Material Girl - Madonna
Give It Up - KC and the Sunshine Band
Something Got Me Started - Simply Red
Ain't Nobody - Chaka Kahn
Feel For You - Chaka Kahn & Rufus
Don't Leave Me This Way - Thelma Houston
I Wanna Dance Somebody - Whitney Houston
How Will I Know - Whitney Houston
Let's Dance - David Bowie
Modern Love - David Bowie
Temptation - Heaven 17
Don't You Want Me Baby - Human League
Need You Tonight - INXS
Cuddly Toy - Roachford
If You Let Me Stay - Terrence Trent D'arby
Ride Like The Wind - Christopher Cross
Kiss - Prince
Let's Go Crazy - Prince
Power of Love - Huey Lewis and the News
Hip To Be Square - Huey Lewis and the News
My Prerogative - Bobby Brown
Living in a Box - Living in a Box
Walk The Dinosaur - Was not Was
I'll Be Ready - Jim Jamison/Baywatch
Yah Mo Be There - Michael McDonald
Roseanna - Toto
Africa - Toto
Labour of Love

Jazz and Swing
Fly Me To The Moon - Frank Sinatra
Ain't That A Kick in The Head - Dean Martin
For Once in My Life - Stevie Wonder
Sway - Dean Martin
The Way You Look Tonight - Frank Sinatra
Moondance - Van Morrisson
Too Good To Be True - Andy Williams
Ain't No Sunshine - Bill Haley
Let There Be Love - Nat king Cole
Don't You Worry Bout A Thing - Stevie Wonder
Isn't She Lovely - Stevie Wonder
Otherside of the World - KT Tunstall
Every Little Thing She Does - The Police
Stand By Me - Ben E King
Sunrise - Norah Jones
Don't Know Why - Norah Jones
At Last - Etta James
Sunny - Standard
Walk On By - Dionne Warwick
Wayfaring Stranger - Eva Cassidy
It Don't Mean a Thing - Duke Ellington
Better Together - Jack Johnson
Your Song - Elton John
If I Ain't Got You - Alicia Keys
Fell in Love With A Boy - Joss Stone
Son of a Preacher Man - Dusty Springfield
Warwick Avenue  - Duffy
Everything - Michael Buble
L.O.V.E

The dance floor was full all night, guests were dancing amongst the tables becau...

“I couldn’t recommend them highly enough! I was initially worried that they might be a bit too ‘polished’ for a wedding band as I wanted to create a really fun atmosphere but I needn’t have worried - we couldn’t have had more fun! I’m still getting calls now from guests saying how amazing the band were, the pictures say it all – the dancefloor was full all night, guests were dancing amongst the tables because there was no space left on the dancefloor! I can’t wait to have them back at our ten year anniversary party! ”

They were absolutely incredible.

“I just wanted to say a big thank you for Apollo Groove on Saturday night. They were absolutely incredible and everyone is talking about them and wants to have them play for their party! What a band, they are probably the best support band in the world. Please pass on my gratitude for them for making them the best night of my life. I will pass on your details to everyone interested in booking them for their big event.”

Many thanks to Apollo Groove for playing our College Ball. The choice of music w...

“Many thanks to Apollo Groove for playing our College Ball. The choice of music was fantastic and was made even better by the way it was played. Proof of this could be seen by both the pocked dance-floor and the topping feet of all those watching. Just as important (at least to our nervous entertainment booker) was that the band were punctual, professional and unbelievably cheerful throughout the whole night. Definitely recommended. Chris Martin, Oxford Uni ”

'What a great party! Perfect selection of dance music which had most people on t...

“'What a great party! Perfect selection of dance music which had most people on their feel most of the lime - some going! Many, many good things said about the bond afterwards - like I said - great party! See you next year!' Newdigate School Ball ”

Apollo Groove took our international awards gala dinner to a new level. From the...

“Apollo Groove took our international awards gala dinner to a new level. From the opening saxophone set during the welcome reception to live walk-up music through to a sensational dance act followed by a ‘must-dance’ set by the full band, everyone’s experience was enhanced by our choice of band. Our event attracted 500 guests from 51 countries with representatives of all the top non-alcoholic drinks companies including Coke and Pepsi. We have had dozens of comments about the quality of the whole event and particularly the band. Deciding to add ‘live’ walk up music for the awards presentation itself was a first for us, and the decision proved totally right. The ‘stabs’ ranged from intense to amusing – our Managing Editor walked up to the Mission Impossible theme! – and caused one of our guests to remark that it was ‘just like the Oscars’... On the sheer entertainment side of things, check out this band. They are awesome. On the business and event organising side, I have to sa...”

Most Alive Network artists travel UK wide and internationally. Get a guide price instantly by clicking the 'get quote' button and entering your event date and location. Make an enquiry and we will liase directly with Apollo Groove to confirm price, availability, and the provide you with a confirmed quote.

An extra 70 minute set of live music, based on the standard line up of musicians.

An extra 70 minute set of live music, based on the standard line up of musicians.

After midnight finish, per hour Add £277

Cost per hour of after midnight finishes, based on the standard line up of musicians

for up to 2 hours suitable for awards ceremonies

Men in Black Party band employ a professional sound engineer to work with them on every gig. This means there is a dedicated (and very experienced) person who's sole job it is to continuously tweak the sound and lighting, so the sound is absolutely perfect for your event. This means the musicians can focus on what they do best - keeping the party flowing and the guests having the night of their lives!

Are you seeking a band that are well known for their...
Absolute quality? Outstanding Musicianship? World-wide success at functions all over the globe? Flexibility to suit your individuality as a customer? Varied repertoire featuring a dynamically designed playlist of both modern and classic party tunes?

Apollo Groove have built up an outstanding reputation over the years, having played all over the world at some of the largest Corporate Events, Weddings, Jewish Simchas and Festivals. Most notably, Apollo Groove were the only band to perform to 300,000 people in Hyde Park for the Royal Wedding celebrations. This went down in the record books as the largest UK gig ever!

The band perform, not only performing all over the country but also in world-wide destinations such as Dubai, Italy, Brussells, France, South Africa, Romania, Egypt....and Kazakhstan, and since their Royal Wedding appointment have been approached by booking agents in USA and Australia. This band has gone global!

The band have an exceptional wealth of knowledge and experience, using top UK session players who play for artists such as The Spice Girls, Take That, Robbie Williams, Lily Allen, Amy Winehouse, James Morrisson, Beyonce, Gloria Gaynor, Jools Holland...to name only a few! This means that when you book Apollo Groove you are guaranteed outstanding musicianship, from players who have played in stadiums all over the world.

The band pride themselves on playing a hugely diverse range of music, and understand that not everyone wants to hear the same old songs that the majority of function bands play! While featuring all the classics from the 50s,60’s,70’s and 80’s, the band also include a more modern selection of music from the present day, which means Apollo Groove can cater for audiences of any age!

The band also include some of the traditional Jewish songs for Jewish Simchas.

Apollo Groove realise that every event is different, therefore we can tailor make our line-up to suit most sizes of room/audiences/budgets.

(These line-ups are flexible, eg. if you would prefer your 7 piece band to have a saxophonist and a male vocalist that’s no problem!)

The full 12 piece band is not to be missed for high level corporate events and larger weddings!