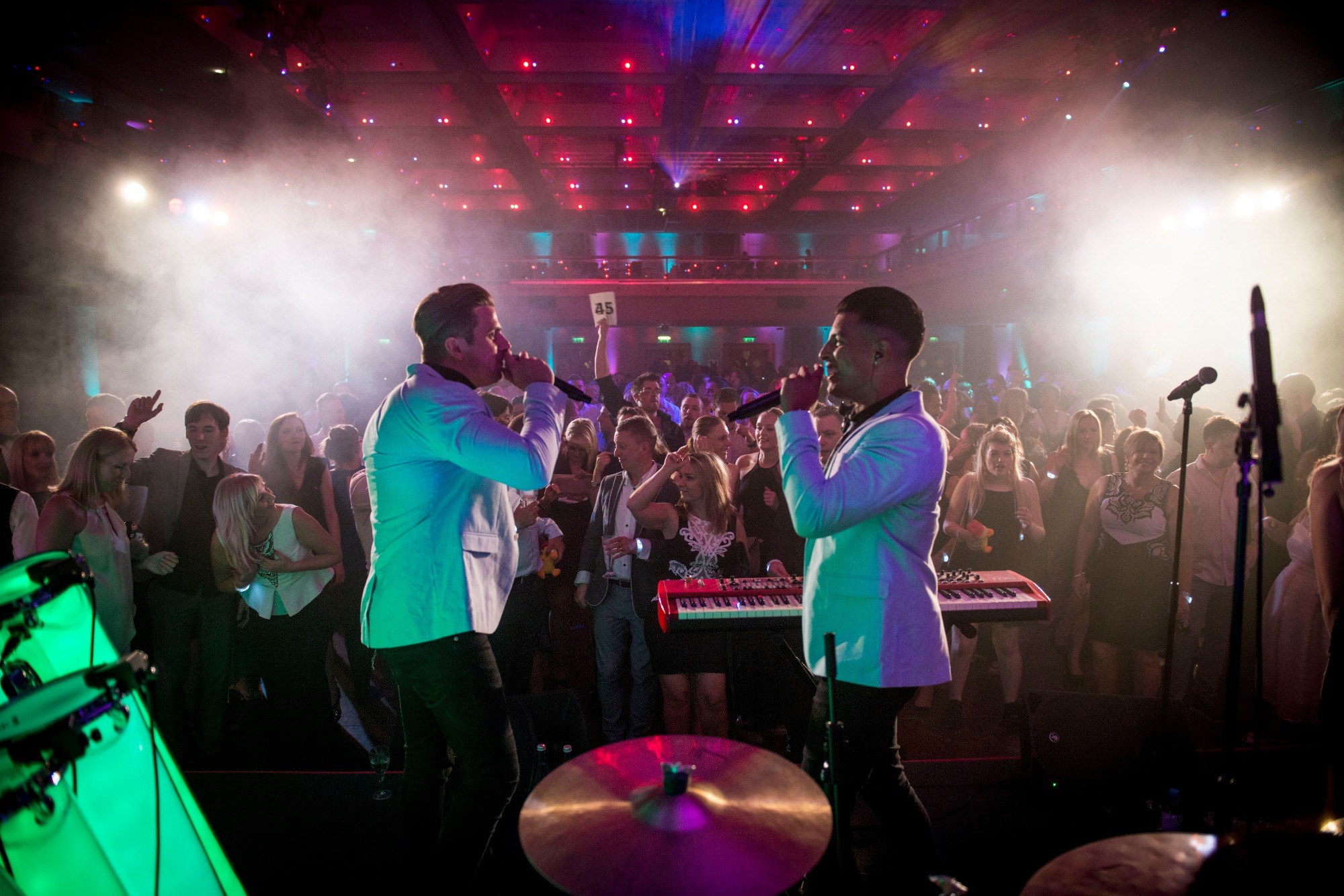 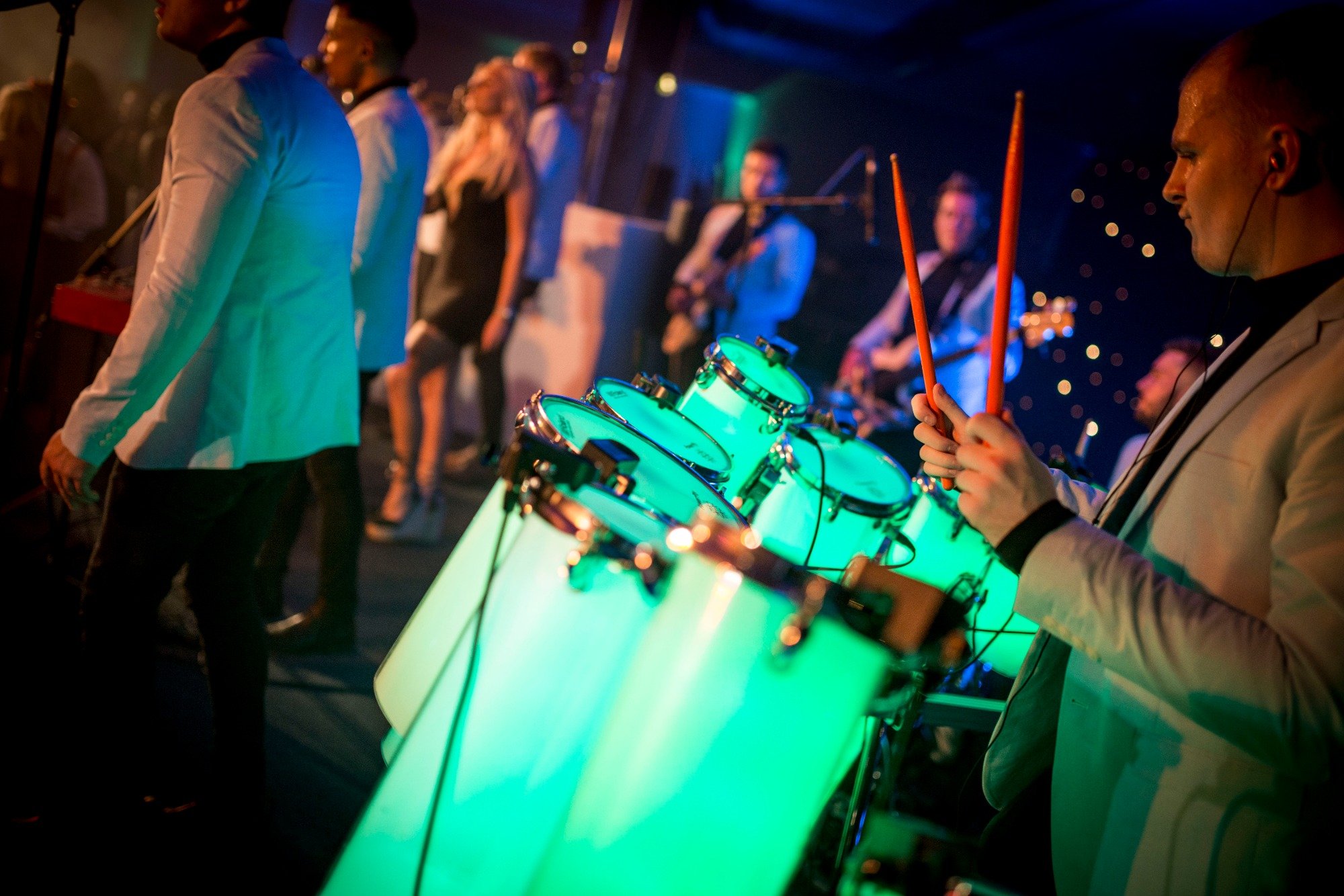 With a unique LED drum kit, All Lit Up are a premium quality, fully interactive party band who will bring fun, wow factor and excitement to any event! Made up of top industry professionals who've worked with the likes of Adele & Sam Smith, this band never fail to deliver an incredible live show. 7 piece to 12 piece band + dancers.

Unique Party Band All Lit Up - Available from AliveNetwork.com

“They were absolutely fantastic”

SONGS YOU WON’T EXPECT A LIVE BAND TO PLAY

They were absolutely fantastic

“The band were absolutely brilliant. They let us use a microphone for the speeches before the dancing and were so flexible when the meal ran over. When they started playing the dance floor was packed from start to finish. Apart from the first song they chose the set list and knew exactly how to keep the dance floor full. We have had so many comments from friends saying how amazing they band were and how they were the best band they have heard at a wedding. Thank you all so much for such a spectacular end to a wonderful day.”

“Thank you so much to All Lit Up for making our first company social event so good. They were a fantastic band and would highly recommend”

Our guests are singing your praises.

“An enormous thank you for bringing the house down. Music was a huge priority for us, and you all exceeded our wildest hopes and expectations. Our guests are singing your praises. Thank you for making our long-awaited wedding day so incredible, for keeping the party pumping and for your unflagging energy and professionalism even in the crazy heat. We are so grateful.”

“The atmosphere wouldn't have been the same without this band! We've received so many positive messages from our guests about how brilliant the band were. They worked so well with our DJ to make sure there was smooth transitions between sets and LOVED how they came into the crowd, super super fun. Thank you!”

You were all absolutely incredible

“We would just like to say a huge thank you to you and the band as you were all absolutely incredible and so much fun! Majority of the company are ex-military so they know how to have a good time but I have been inundated with emails to say how great the party was, especially the band! I wanted you guys for our 15th anniversary last year and when that had to be cancelled due to COVID, I was so pleased when Marc said you were available for this event, so thank you to all of you for making our evening memorable! I think my feet have started to regain some feeling back into them after all of the dancing!! I’ll definitely be requesting for more money in the budget next year for more events so I can rebook you guys and I’ll be sure to recommend you as well!”

Most Alive Network artists travel UK wide and internationally. Get a guide price instantly by clicking the 'get quote' button and entering your event date and location. Make an enquiry and we will liase directly with All Lit Up to confirm price, availability, and the provide you with a confirmed quote.

Add a 3 piece Brass Section to the standard lineup

Add an additional Male vocalist to the standard lineup

PA for use during Daytime, Magic Mirror, Starlit Dancefloor, Up lighting

For earlier daytime entertainment with Sax playing the vocal lines

16 x 16ft starlit dance floor in either black or white. Only available in Kent, Surrey and Essex.

3 hours hire and unlimited prints. Only available in Kent, Surrey and Essex.

Filmed Compilation of the Performance Add £513

Includes audio professionally recorded and mixed by one of Bastille's producers.

For band laptop DJ to stay til 1am

For band laptop DJ to stay til 1am

Please note: All Lit Up are a collective of musicians, all of equal quality, who regulary perform together. Due to touring, TV and session work, a specific line up of musicians cannot always be guaranteed and some of the members who perform at your event may differ from those shown in promotional materials. This will in no way effect the quality of the band's performance. For more information please speak to an Alive Network booking agent.

Highlights
* Unique band with an LED drum kit!
* Made up of the industry's top musicians who have worked with artists such as Adele, Michael Buble, Sam Smith & many more.
* Played at some of the most prestigious venues in the world including the O2 Arena, Wembley Stadium, Madison Square Garden (New York), Atlantis Palm Hotel (Dubai) and Marina Bay Sands (Singapore)
* Larger line-ups available with additional vocals & horn section for the ultimate show!
* Lighting & PA upgrades available for larger events.

Please note: a minimum space of 6 x 5 metres is required for this band to perform.

All Lit Up use a fully interactive, versatile, colourful, light up drum kit that was built it themselves. Using state of the art technology they have made it possible to sample any sound, from anywhere and place it on the drum kit. This allows them to not only have a sound that is identical to the records we all know and love, but also the ability to sample everything from phone voice notes of well wishes and birthday messages, to iconic movie quotes and instrumental hooks, all played live on the drum kit. So in other words the band can play any song, from any genre, as close as physically possible to the original track and still deliver it in an incredible live performance.

Not only do they have this one of a kind, state of the art stage centrepiece, but the musicians that surround it are some of the finest in the World. With members that have played with the likes of Adele, Michael Buble, Olly Murs, Jennifer Lopez and Sam Smith plus many, many more household names the standard of musicianship is second to none. This allows the band to be incredibly versatile as they have been lucky enough to play at some of the most prestigious venues around the World such as the O2 Arena, Wembley Stadium, Madison Square Gardens, plus the Troubadour in LA, London's Roundhouse, Atlantis Palm Hotel in Dubai, and even the Marina Bay Sands in Singapore.

Band leaders Adam and Dan who created the drum kit have been the driving forces behind putting together this Superband. Thinking outside the box merging Adam's passion for innovative technology with Dan's knowledge of music production, the synergy gave birth to something completely unique. Dan's influence within the music industry has been producing and writing for Bastille, Sam Smith, the Saturdays, Lil Wayne and other international artists. This has given the band an extreme advantage over any other with live sound, live perfomance and above all else, the ability to merge produced music within a live band environment.

THE DRUM KIT
• The only one in the World.
• Colour coded to match any colour themes or desired colour choices.
• Ability to sample any track, any sound, any noise and place it on the drum kit.
• Possibly the best centrepiece to any band.
• Key members of the party will be given the opportunity to join the band on stage and play on the kit subject to the band's discretion.
• The biggest talking point of any event.

Hopefully you will see from the videos that not only do the band have one of the coolest drum kits in the World, they also pride themselves on their infectious chemistry on stage that will make it impossible for anyone to stand still. The band is made up of like minded friends that have the passion to not only bring great musicianship to the stage but also fun and excitement to any event. They truly believe that if they have fun, you have fun.

After booking, speak directly with All Lit Up.