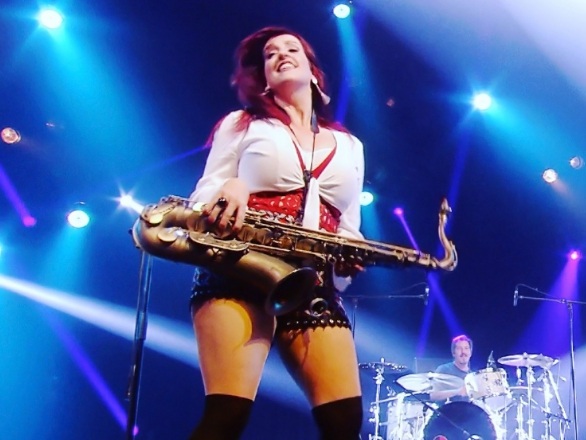 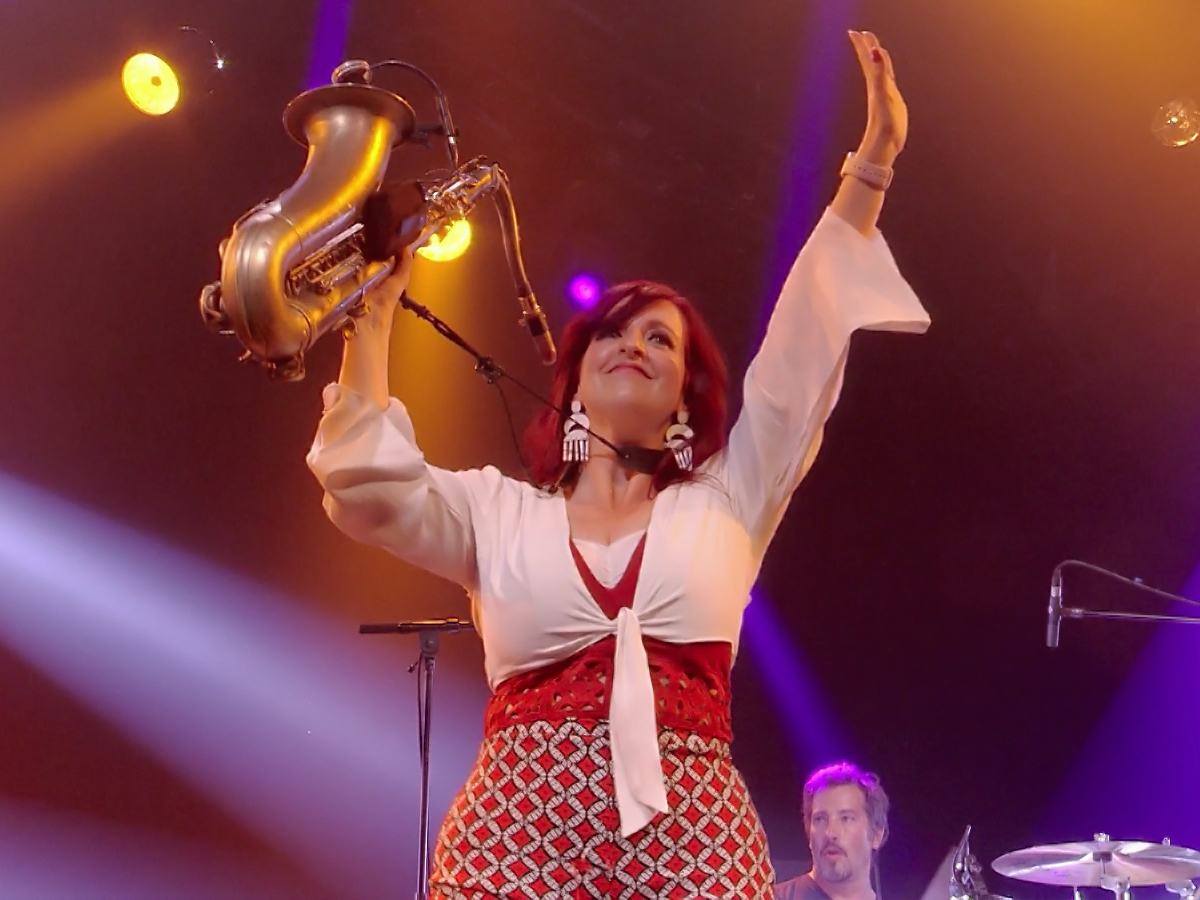 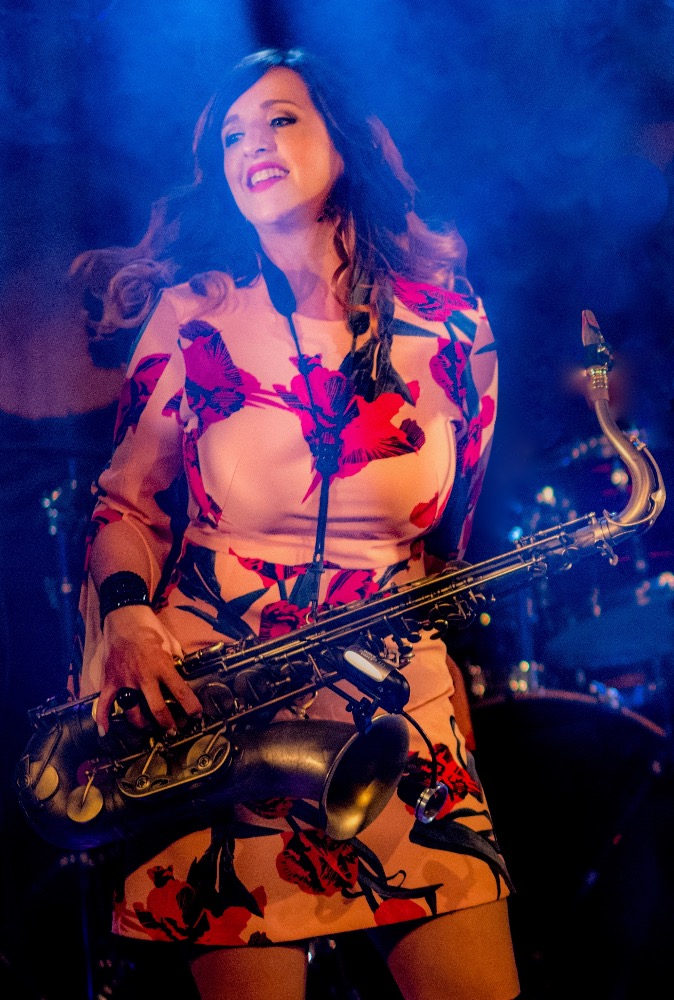 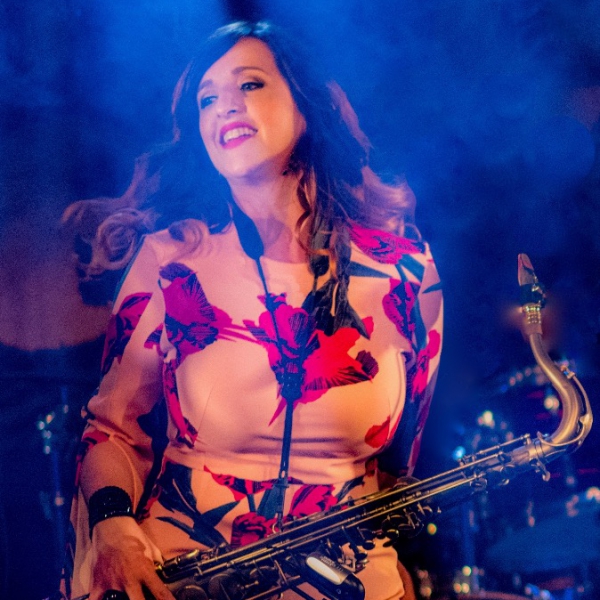 Anna is a member of Jools Hollands' band & The Brooklyn Funk Essentials & is an international touring & recording artist. With hundreds of weddings, corporate events & parties under her belt, clients are always thrilled with her performances.

The following list compises songs from Anna's saxophone and backing tracks repertoire - if you are booking Anna to play alongside a DJ, she can freestyle over any songs of you or your DJ's choice.

(The best tracks from the past, for lively background music & dancing)

Baker Street - Jerry Rafferty
Diggin’ On James Brown - Tower Of Power
Dock Of The Bay - Otis Redding
How Deep Is Your Love - The Bee Gees
How Sweet It Is To Be Loved By You - Marvin Gaye
I Got A Feeling - James Brown
I Heard It Through The Grapevine - Marvin Gaye
I Say A Little Prayer - Aretha Franklin
I Wish - Stevie Wonder
Is This Love - Bob Marley
Isn’t She Lovely - Stevie Wonder
Let’s Stay Together - Al Green
My Cherie Amour - Stevie Wonder
My Girl - The Temptations
Natural Woman - Aretha Franklin
Pick Up The Pieces - Average White Band
Play That Funky Music - Wild Cherry
Put It Where You Want It - Average White Band
Signed, Sealed, Delivered - Stevie Wonder
Soul With A Capital ‘S’ - Tower Of Power
Stand By Me - Ben E. King
Superstition - Stevie Wonder
Three Little Birds - Bob Marley
Try A Little Tenderness - Otis Redding
Use Me - Bill Withers
What’s Going On - Marvin Gaye

(Perfect for first dances, wedding ceremonies & dancing with the one you love)

A Thousand Years - Christina Perri
All Of Me - John Legend
Always A Woman To Me - Billy Joel
At Last - Etta James
Bonfire Heart - James Blunt
Hallelujah - Alexandra Burke
Have I Told You Lately That I Love You - Van Morrisson
How Deep Is Your Love - The Bee Gees
How Long Will I Love You - Ellie Goulding
I Can’t Help Falling In Love With You - Elvis Presley
If I Ain’t Got You - Alicia Keys
If You’re Not The One - Daniel Bedingfield
Just The Way You Are - Billy Joel
Let’s Stay Together - Al Green
Marry You - Bruno Mars
My Cherie Amour - Stevie Wonder
Signed, Sealed Delivered - Stevie Wonder
Stand By Me - Ben E. King
Symphony - Clean Bandit
Thinking Out Loud - Ed Sheeran
Woman In Love - Barbara Streisand
Wonderful Tonight - Eric Clapton
You Are The Sunshine Of My Life - Stevie Wonder
You’re Beautiful - James Blunt
You’re In My Heart - Rod Steward

(Seasonal favourites to bring a festive feel to your event)

“We booked Anna for our wedding which was postponed twice due to COVID but we were third time lucky and wow was it worth the wait! Anna arrived for the start of the evening celebrations and performed two sets, both amazing! Our guests loved it as much as we did, she is incredible and was so professional and helpful on the lead up to the big day. I cannot recommend Anna highly enough for any occasion!”

Anna made our wedding so special, she is incredible!

“Anna played two 45 minute sets for us on our wedding day and she was absolutely awesome!! Played over Ibiza dance music and the dance floor was full. Would 100% recommend booking her, setup with the DJ was seamless and everybody said how good she was.”

Wonderful music! Made for a great reception!

“Anna was super and no trouble at all!! My husband and I arrived at the venue to a great sound!! It was raining on and off but this did not deter Anna in the slightest!! Everyone commented on it! Amazing :)”

Could not recommend her more!

“We booked Anna for a surprise performance at a friend's wedding in August. She could not have been more hospitable and keen to help us make the surprise really special. From being incredibly flexible before the event and learning a completely random song for their arrival, to adjusting to timings on the day, she was a pleasure to work with. Nothing was too much and we're so grateful for making our friend's special day even more special! Could not recommend her more.”

I will be recommending you to everyone who is having a party!

“Anna - massive thank you for last night, you were amazing! Everyone loved you! I will be recommending you to everyone who is having a party!”

Price from £455 + travel from West Midlands

Most Alive Network artists travel UK wide and internationally. Get a guide price instantly by clicking the 'get quote' button and entering your event date and location. Make an enquiry and we will liase directly with Anna (Saxophonist) to confirm price, availability, and the provide you with a confirmed quote.

Larger PA suitable for 200 people & over. From

Highlights
* Anna is a highly experienced saxophonist based in Birmingham, but travels UK wide.
* Her repertoire includes current and classic pop hits, funk, soul and Motown tracks, chilled acoustic songs, ibiza lounge vibes and club sax, all performed over high quality custom-made backing tracks.
* Anna can also be booked to play alongside your DJ (please speak to one of our entertainment coordinators for more info)

Over the last two decades saxophonist, vocalist, musical director, music arranger and recording artist Anna Brooks’ prestigious career has gained her a reputation as one of the UK’s leading jazz, funk and pop saxophonists and female musicians. She is currently alto saxophonist and backing vocalist with Jools Holland’s band and has recently been seen on BBC 2’s Hootenanny TV show performing a solo with Gregory Porter as well as appearing as a guest on DJ and TV presenter Sarah Cox ‘s ‘Just Can’t Get Enough ‘80s’ live touring show. For ten years Anna was tenor saxophonist and backing vocalist with the US-based 'Brooklyn Funk Essentials' with whom she toured worldwide and recorded two albums - ‘Funk Ain’t Ova’ and ’Stay Good’ with vocalist Alison Limerick. As well as touring the UK with Jools  Holland's Rhythm And Blues Orchetra, she toured Europe in 2020 with his four-piece band on tenor and soprano saxes and vocals alongside special guests KT Tunstall, Ruby Turner and Louise Marshall.

Anna graduated from the Royal Birmingham Conservatoire with a First-Class Honours degree and soon afterwards was commissioned to compose and perform music for the ‘Rising Star’ series at the Cheltenham International Jazz Festival. A record deal followed and her first album ‘My Time’ was released in 2003, followed by the E.P ‘Going My Way’ in 2007. She is currently working on a long-awaited second solo album.

As a music preparation specialist / copyist, Anna has worked for such prestigious clients as Peter Gabriel, Kate Bush, Katie Melua, film producers Ridley Scott and Gurinder Chadhar, Kanbar Animation and the BBC (Dr. Who, Torchwood). She has composed original music for TV and independent film and arranged music for numerous theatre shows and bands, including Jools Holland’s Rhythm and Blues Orchestra.

Anna is passionate about music education and has been a saxophone tutor at the Royal Birmingham Conservatoire since 2003.

Please note: for events in Scotland, Ireland or Abroad, Anna will need to be able to fly to the venue and have a PA sytem in place ready that she can connect to.

After booking, speak directly with Anna.