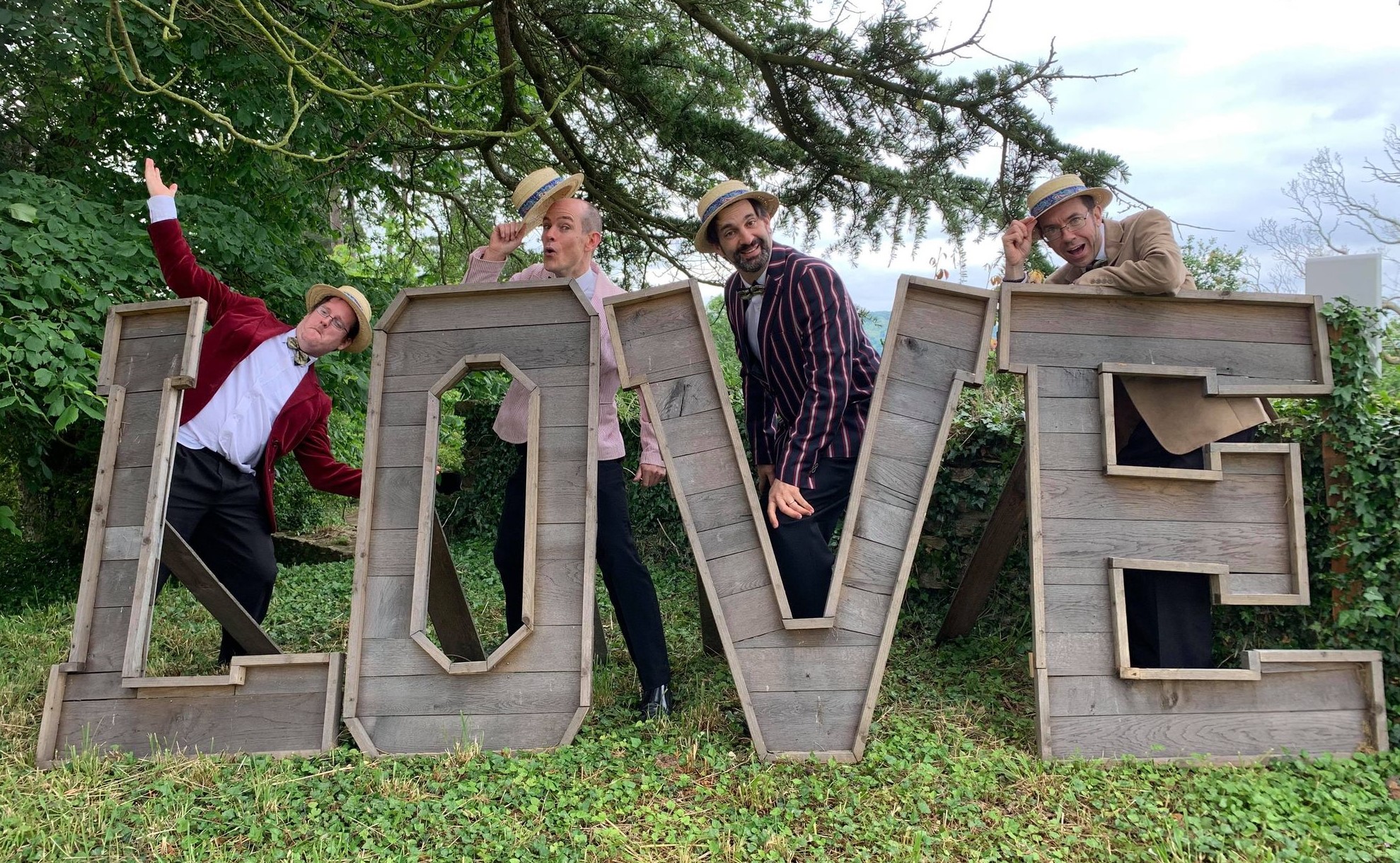 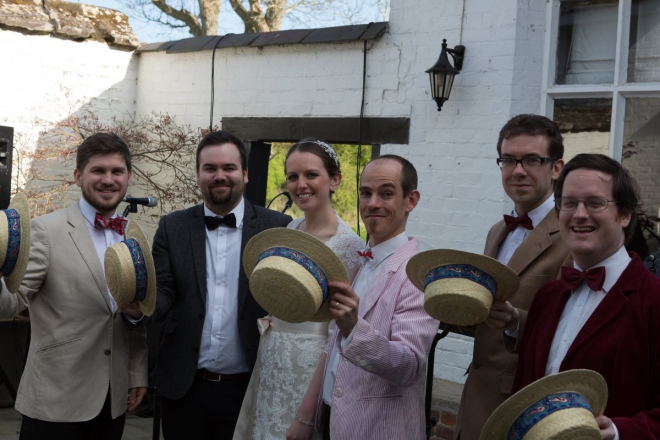 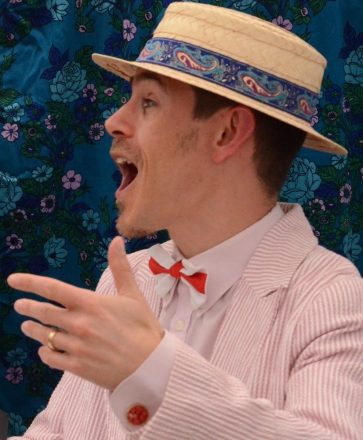 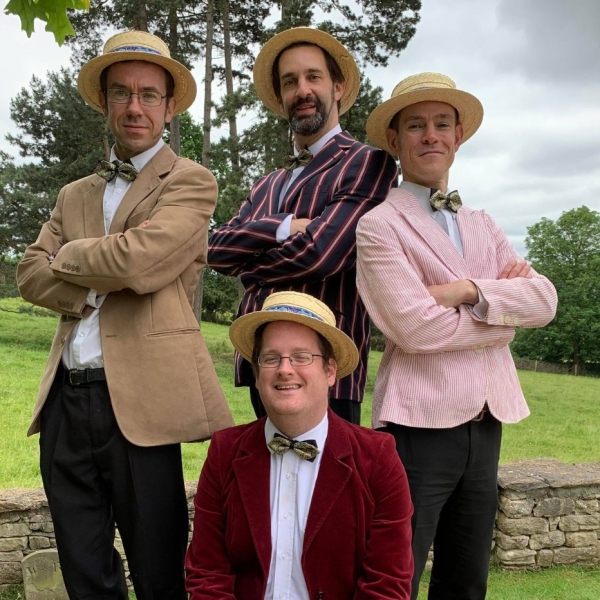 Specialising in the classic barbershop repertoire, Wax Lyricals guarantee to bring a smile and that feel-good factor to any event! From up-beat toe tappers to heart-warming ballads, this quintet will bring a touch of real old-school charm to your event!

“These guys are the real deal!”

These guys are the real deal!

“I booked Wax Lyricals for an elaborate marriage proposal, involving a custom song and a surprise performance at Arley Arboretum. From the first phone call, Joe shared his expertise and some really great suggestions for the day. The communication beforehand was brilliant and helped calm my nerves. On the day itself, these guys looked and sounded like the real deal from the outfits to the superb song choices and they did not disappoint. It was a very special event which we will be talking about for years to come. They even managed to get it filmed for us to share with friends and family. She said yes, of course. Thanks so much! Chris & Esme”

“We hired Wax Lyricals for our original wedding at a larger venue. Once covid hit and we decided to downsize to 30 and change venue, Wax Lyricals were so amenable to our new plans. I had contact with Joe, who was very responsive and professional throughout our pre-event email conversations. The event itself was amazing, we had Joe on piano at the beginning and then the barbershop set later on in the day which added a great, unique experience to our day. Our guests loved them and so did our children! Would definitely recommend them to give your event that special edge.”

Something a bit different - With a musical twist!

“We wanted something a little bit different for the entertainment at our drinks reception, and we'd heard great things about the Wax Lyricals. We certainly weren't disappointed, and we received loads of great feedback from our wedding guests. The boys' harmonies and range of songs were spot-on; they're a traditional barbershop singing group with a professional yet friendly approach, which helped us to add an extra touch of class to our special day. We even tried our hand at having a little sing with them (with mixed results!) and invited them to stick around for a drink afterwards! Great guys, and a great way to add an unusual musical twist to any occasion!”

a great way to really get your party started!

“Delighted to say what a fantastic performance we enjoyed from your lovely barbershop group at our staff party! You were extremely professional and friendly and made the planning and logistics clear and easy for us. The performance itself did not disappoint either - right from the moment we came into the room to the sweet sound of 'My Evaline' to the huge finish and eye-watering high notes of your finale! Everyone I spoke to said how fun the sets were and how you'd created just the right atmosphere! Thanks again!”

“We booked the Wax Lyricals to perform as a surprise act for my mother-in-law’s birthday as she is a huge barbershop fan. She was not disappointed!! The boys were smart and friendly and very helpful beforehand discussing the logistics of our party and how best they could fit around the other things we had planned. They then not only gave two sizzling sets of barbershop singing but also two amazing piano sets too – one from Joe and another from John – which gave us a perfect musical backdrop all evening. The highlight for the birthday girl must have been the specially arranged barbershop version of her favourite Il Divo track “Mamma” which the boys performed with great charisma and we insisted on two encores!! A really professional group of talented and extremely friendly lads! Thanks again.”

Price from £827 + travel from Worcestershire

Most Alive Network artists travel UK wide and internationally. Get a guide price instantly by clicking the 'get quote' button and entering your event date and location. Make an enquiry and we will liase directly with Wax Lyricals to confirm price, availability, and the provide you with a confirmed quote.

For acoustic performance or PA provided at venue

Wax Lyricals barbershop quartet was formed in 2012 by former members of Bournville Barbershop with singers from Birmingham City Choir. The group specialises in the classic barbershop repertoire and can bring a touch of real old-school charm to any event! The songs are varied and full of rich close-harmony singing; from up-beat toe tappers to heart-warming ballads and songs of love.

The boys can perform acoustically for a more intimate performance or can provide amplification for larger venues. It is also often possible to specially rearrange your favourite song to be performed in the barbershop style, adding a unique touch to your event. Whatever the event, Wax Lyricals guarantee to bring a smile and that feel-good factor to your special occasion!

In addition to the barbershop songs, Joe and John are both talented and experienced event pianists and can provide great value jazz and classical piano.

Joe’s choral training began as a chorister at Birmingham Cathedral, from where he then went on to sing with various choirs and organisations. Joe was also assistant director at Bournville Young Singers from 1998 to 2008, with whom he toured many European capital cities and performed in venues such as Notre Dame and Brussels Cathedral. He has been Musical Director at The Number 8 Theatre Pershore and was nominated Best Musical at the 2010 NODA awards with West Side Story and followed this up with a win in 2012 with The Secret Garden. He is currently working with Redditch Operatic and has been nominated for many more NODA awards, recently winning Best Musical for CATS.

Toby has been singing in choirs up and down the country for over twenty years, including singing solos and in small groups at Salisbury, Liverpool, Norwich and Gloucester cathedrals, amongst others. With a background in choral music, Toby enjoys branching out into jazz and barbershop, and Wax Lyricals is the perfect balance between music-making and having fun. “Bring on the boaters"

John has been a member of the City of Birmingham Choir for over 15 years. In the last few years he has been receiving vocal coaching that has helped attain Grade 8 level. He accompanies and coaches a Male Voice Choir and also conducts his own choir called 'Enchant'. Enchant are a mixed voice choir who have been singing together for 7 years. Last year they recorded their debut album which had many of John’s own compositions and arrangements on.

Tony is a former chorister and lay clerk at Bristol Cathedral.  He has performed with and directed many vocal ensembles across Europe.  He is classically trained and was a first-study vocalist at Birmingham University.  He has taught at a variety of secondary schools and is currently Master of Music at Ellesmere College.  He is also the Musical Director of Shrewsbury Cantata.