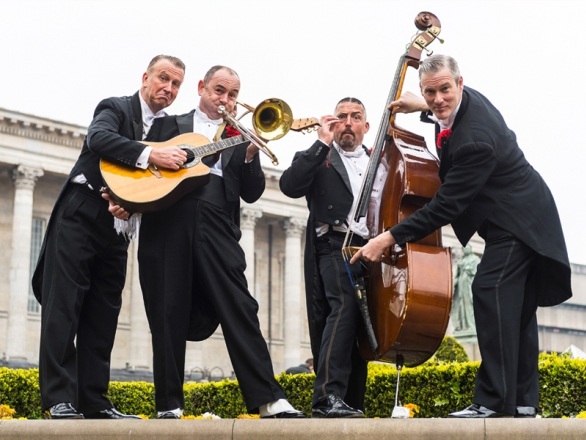 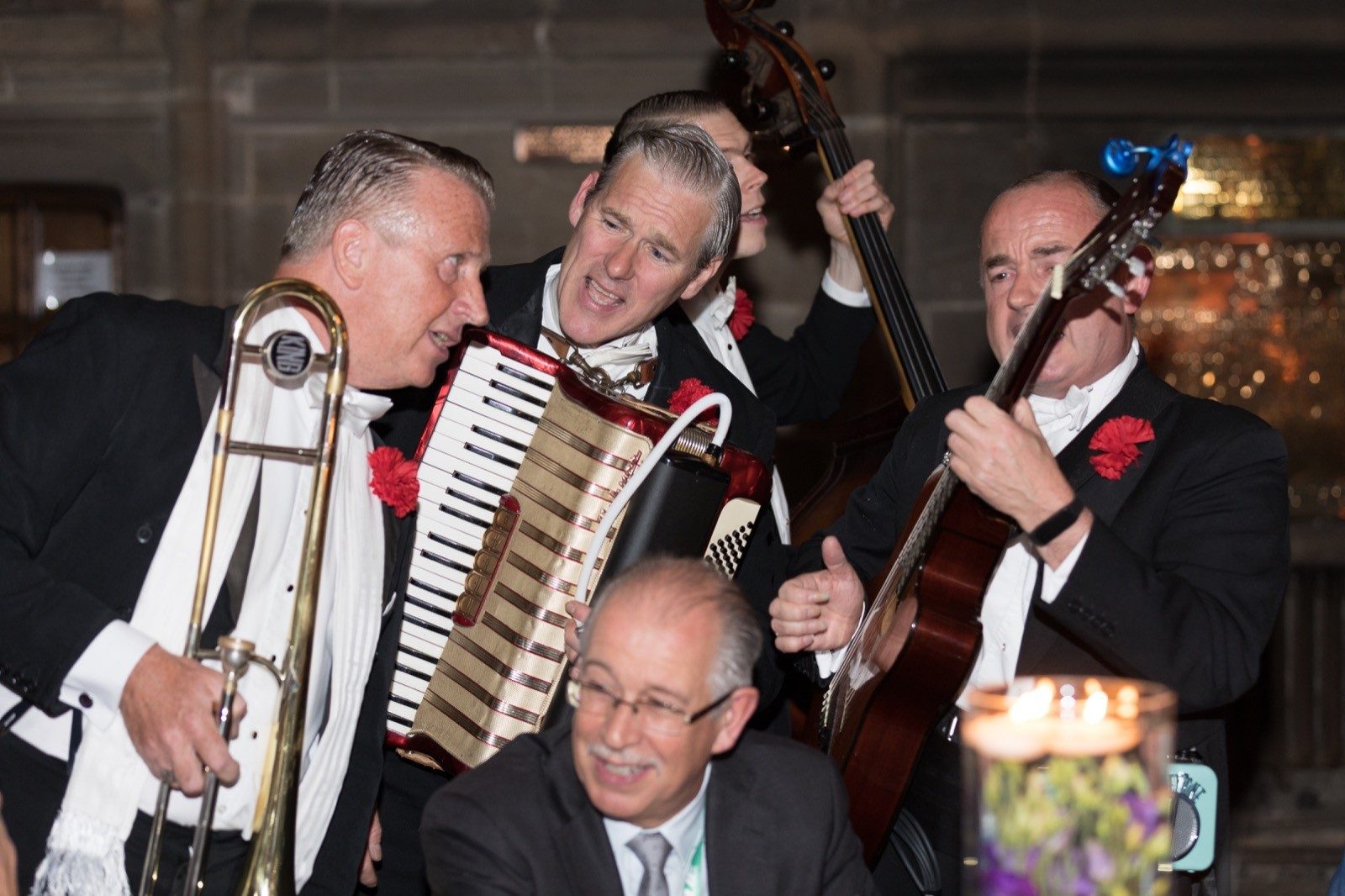 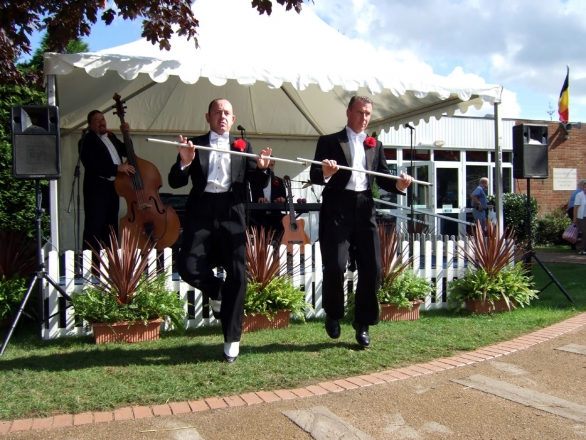 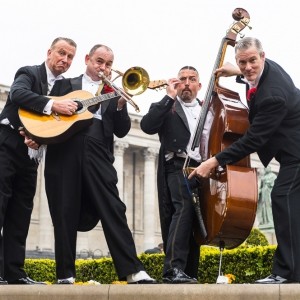 This quintessentially English quartet recreate the authentic musical ambiance of the 1920's & 30's when Charleston was all the rage. With an impressive previous client list including HRH Prince Philip & over 20 years experience entertaining clients such as The One Show, The Savoy, BMW, House of Fraser and Coca Cola, Toffs In Tails guarantee to be the highlight of any occasion!

Charleston
You Do Something To Me
Putting On The Ritz
Button Up Your Overcoat
The Sun Has Got His Hat On
Keep Young & Beautiful
Yes Sir That’s My Baby
Anything Goes
Babyface
William Tell  Overture
Crazy Words, Crazy Tunes
The Can Can
Pick Yourself Up
Don’t Bring Lulu
Trail Of The Lonesome Pine
Java Jive
When I’m 64
Blackbottom
Teddy Bears Picnic
Bei Meir Bist Du Schoen
Cruising Down The River
Leaning On A Lampost
Bring Me Sunshine
Sheik Of Araby
42nd  St
Aint She Sweet
When I’ Cleaning Windows
Five Foot Two
Up A Lazy River
Dancing Cheek To Cheek
Blue Moon
Pasadena
I Get A Kick Out Of You
Lady is A Tramp
Don’t Get Around Much  Anymore
You Always Hurt The One You Love
Alexanders Ragtime Band
When Your Smiling
I Only Have Eyes For You
I Wont Dance
Goody Goody
Blue Moon
It’s a Hap Hap Happy Day

Everyone and I mean everyone of our 100 odd guests thought they were great and a...

“Having seen the band perform a few years back I knew they would be great. I gave them a big build up to my guests and they fully lived up to expectations. Feedback from our guests was "wow what a way to get the party rolling", "how did you find these guys they are amazing", "they were not only great musicians but great fun with it" etc etc. Everyone and I mean everyone of our 100 odd guests thought they were great and a welcome change from the typical wedding band.”

The Feed back on you guys has been amazing.

Thanks for helping to make our wedding day so utterly perfect.

“Thanks for helping to make our wedding day so utterly perfect. Everyone loved you. ”

“I just wanted to say a huge thank you for Toffs In Tails' performance at the Burns an' a' That Festival at the weekend in Ayr. The band were absolutely superb. Our client was delighted, the public totally loved them and I personally found them a real pleasure to deal with in every way. Fantastic performers, excellent musicians and all-round nice guys. Hope we get a chance to work with them again in the future.”

Toffs In Tails were Fantastic!

“A truly amazing evening! Toffs In Tails were Fantastic! Everybody commented on how amazing they were. They totally set the scene of the 1920s. Thank you very much!”

Most Alive Network artists travel UK wide and internationally. Get a guide price instantly by clicking the 'get quote' button and entering your event date and location. Make an enquiry and we will liase directly with Toffs In Tails to confirm price, availability, and the provide you with a confirmed quote.

Highlights
*The most experienced and established 1920s / 30s Musical act in the UK with over 20 years experience.
*Previous clients include BMW, Coca Cola, HRH Duke of Edinburgh and more!
*On the back of their recent successful appearance on The One Show, they will be appearing in episode 6 of the second season of the ITV drama Home Fires in Spring 2016

Four individual and talented performers, unequalled in their field, who recreate the authentic musical ambience of the 1920s and 30s when the “Charleston” was all the rage and the swells were “Putting On The Ritz”. Not only are they extremely talented musically, but they also incorporate in their performance madcap musical stunts that are guaranteed to be the highlight of any occasion.

Their performance is of the highest standard with over 35 TV shows throughout the UK and Europe to their credit and on the back of their recent successful appearance on The One Show, they will be appearing in episode 6 of the second season of the ITV drama Home Fires in Spring 2016. They have entertained in festivals, theatres, corporate events and private parties worldwide with great acclaim, and have more recently entertained on some of the worlds finest cruise ships including the legendary QE2.

Their more recent maritime experience was entertaining for the launch of the new Queen Elizabeth in the presence of HRH the Queen. Many celebrities & other members of the Royal family have been known to enjoy the odd evening’s entertainment with Toffs In Tails, with them being personal favourites of Prince Philip after their performance for him at St James Palace.

Their totally unique sound and authentic three part vocal harmonies, combined with a quintessentially English visual element of serious “tongue in cheek" humour make their show a unique experience for all ages, and their ability to break down the arts barriers with their outstanding performance always leaves their audience begging for more.

Previous Clients
The following is list of some of the clients we have had the pleasure of entertaining over recent years.

After booking, speak directly with Toffs In Tails.