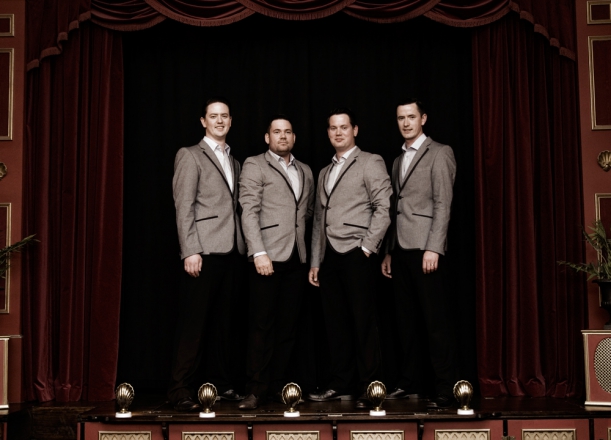 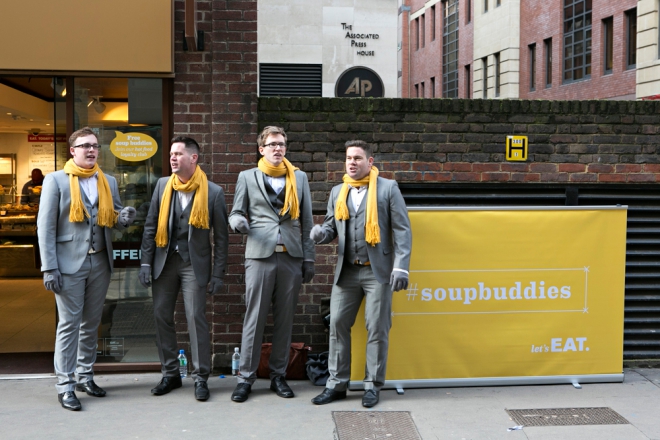 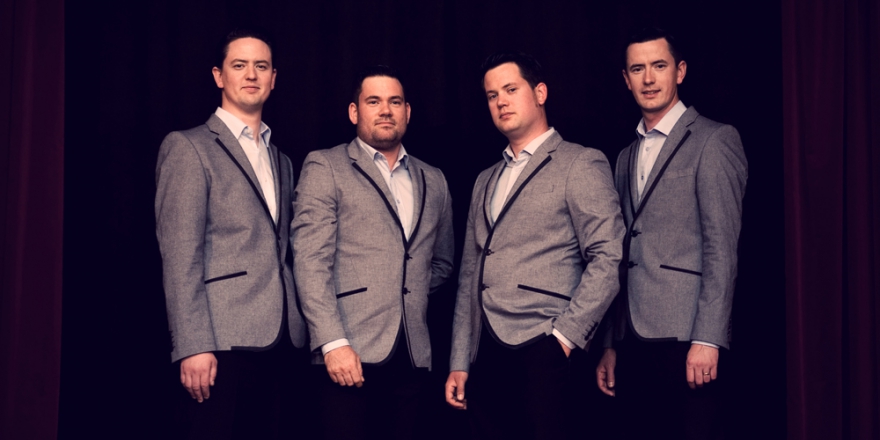 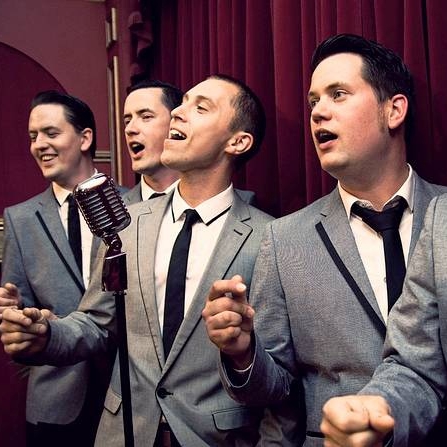 The T-Tones Live performing Sh-Boom (Life Could Be A Dream) - Available from AliveNetwork.com

Standard Repertoire
Note: The T-Tones can learn, arrange or write songs to suit any occasion or booking.

They are constantly adding to their repertoire with contemporary music and 1980's/'90's classics.

For weddings; they can arrange a bespoke acapella version of your special song or first dance for performance on the day.

They also can supply corporate jingles, ice-breakers and stings; written, performed or recorded according to the brief of your corporate event, trade-show or exhibition. They have composed and recorded jingles for many national companies for use on radio, TV and web and have also fronted advertising campaigns for experiential marketing for national brand names.

DOO-WOP UPBEAT:
BLUE MOON (The Marcels)
EARTH ANGEL (The Penguins)
GET A JOB (The Silhouettes)
LIFE COULD BE A DREAM (The Crew Cuts)
LIVING DOLL (Cliff Richard and the Shadows)
MONEY HONEY (Clyde McPhatter and the Drifters)
REMEMBER THEN (The Earls)
RUNAROUND SUE (Dion and the Belmonts)
SIZTY MINUTE MAN (Billy Ward and the Dominoes)
TEENAGER IN LOVE (Dion and the Belmonts)
WHY DO FOOLS FALL IN LOVE (Frankie Lymon and the Teenagers)

DOO-WOP BALLADS:
BANANA BOAT SONG (Harry Belafonte)
GOODNITE SWEETHEART (The Spaniels)
IF I DIDN'T CARE (The Inkspots)
IN THE STILL OF THE NIGHT (The Five Satins)
ONLY YOU (The Platters)
SEA OF LOVE (Phil Phillips)
THERE'S A MOON OUT TONIGHT (The Capris)
TO THE AISLE (The Five Satins)
WHEN YOU DANCE (The Turbans)

2000 - 2010:
AFTERNOON DELIGHT (Anchorman)
ALL THE SINGLE LADIES (Beyonce)
ALL YOU NEED IS LOVE (Love Actually)
DOG DAYS ARE OVER (Florence and the Machine)
DON'T STOP BELIEVING (Glee)
I JUST HAVEN'T MET YOU YET (Michael Buble)
Pencil PENCIL FULL OF LEAD (Paolo Nutini)
REHAB (Amy Winehouse)
SHE'S SO LOVELY (Scouting For Girls)
YOU GOT THE LOVE (Florence and the Machine)

1980's:
CARAVAN OF LOVE (The Housemartins)
DON'T WORRY, BE HAPPY (Bobby McFerrin)
IT MUST BE LOVE (Madness)
ONLY YOU (The Flying Pickets)
SIGN YOUR NAME (Terrence Trent D'Arby)
SLEDGEHAMMER (Peter Gabriel)
SWEET CHILD OF MINE (Guns & Roses)
THE LONGEST TIME (Billy Joel)
THERE SHE GOES (The La’s)
THE WAY YOU MAKE ME FEEL (Michael Jackson)
TRUE COLOURS (Cyndi Lauper)
YOU CAN CALL ME AL  (Paul Simon)

1960's:
ALL YOU NEED IS LOVE (The Beatles)
BRING ME SUNSHINE (Morecambe & Wise)
BORN TO BE WILD (Steppenwolf)
CAN'T BUY ME LOVE (The Beatles)
CAN'T TAKE MY EYES OFF YOU (Andy Williams)
CHAPEL OF LOVE (The Ronettes)
HERE COMES THE SUN (The Beatles)
HIT THE ROAD, JACK (Ray Charles)
HOIND DOG (Elvis Presley)
YOU NEVER CAN TELL / C'EST LA VIE (Chuck Berry)


CHRISTMAS REPERTOIRE:
The T Tones cover a broad range of Christmas and festive music.
This includes Doo-Wop songs, modern and contemporary Christmas music and Christmas carols
Please get in touch and ask for our current Christmas repertoire.

“As the title says, the T-Tones were fantastic and I'd recommend them in a heartbeat. The T-Tones performed at our wedding in late May 2021 - they were very flexible and pragmatic throughout and communication was spot on in the lead up to our wedding. The performance was brilliant and has been a talking point for our guests since who've all said how good they were. Would definitely hire again for another event. 5 stars.”

They are brilliant! Book them!

“I am so pleased that we booked the T-Tones for our wedding. They sang during our ceremony and afterwards at our drinks and canape reception and I cannot recommend them enough! They were brilliant right from the start. Stephen was great in the run up to the wedding: he was quick to reply to any queries, liaised directly with the venue and it was clear that he really thought about the detail of the performance and so I was completely assured about the plans before the big day! Their performance was absolutely amazing. They had a great range of songs to choose from and all of our guests enjoyed their singing and had so many good things to say about them. The group sound even better than we expected live and provided our wedding day with an extra special element to remember. Thank you!!! ”

Better than I could ever hoped for, and people were absolutely gobsmacked

“A M A Z I N G !!!! It was so good! It exceeded my expectations, it was better than I could ever hoped for, and people were absolutely gobsmacked.... The T Tones made a huge impression on everybody. Last but certainly not least - you. Alive Network is such an amazing platform, your personal care relieved me of the worry and strain involved in choosing a band which in turn took off one item from the “worry list” which is quite long for weddings as you know. You did an awesome job. Our wedding was perfect! ”

Surprising, pleasant experience for my guests

“I didn’t get to see much of the boys at the event but all the feedback from the guests was top notch. From meeting them before their first set to their extended “hit the road jack” play off the boys captured my wedding guests and helped them relax and enjoy their afternoon 2 great sets of near pitch perfect magic and even the music professionals and theatricals in my wedding party were highly impressed Thanks boys All the best for the future xx”

Just brilliant!!!! Exactly what we were after!!

“We were fortunate to have the T- Tones perform at our wedding reception and they were great, just what we were looking for. They were professional and friendly and had a great selection of songs. It was just a shame we couldn’t listen to more as we had to dash for photos etc. The guests loved it!!! Can’t recommend enough.”

Price from £744 + travel from Suffolk

Most Alive Network artists travel UK wide and internationally. Get a guide price instantly by clicking the 'get quote' button and entering your event date and location. Make an enquiry and we will liase directly with The T-Tones to confirm price, availability, and the provide you with a confirmed quote.

Acapella song of your choice- arrangement and performance

Acapella song of your choice- arrangement and performance

The T-Tones are a fun and energetic Doo-Wop group specialising in classic '50's Doo-Wop and fun, confident arrangements of contemporary songs and 1990's classics delivered with harmony and style.

They are suitable for staged and featured performances, unexpected surprise performances (wedding crashers in the style of Love Actually) or mix and mingle roaming sets for wedidngs or corporate events. They are in rude health with an original style that has seen them described as "the missing song from a Martin Scorcese movie soundtrack".

The group cover such classic songs as EARTH ANGEL, BLUE MOON and WHY DO FOOLS FALL IN LOVE among others but also make bespoke and quirky arrangements of modern and contemporary songs such as UPTOWN FUNK, CAN'T STOP THE FEELING and SYMPHONY as well as '90's classics HIT ME BABY ONE MORE TIME, NO DIGGITY and ICE ICE BABY among others.

The T-Tones can arrange any song for any event or theme; special requests, first dances, jingles, stings and ice-breakers for experiential marketing, corporate events and trade shows and music/song composition for marketing campaigns and projects. Their consummate and innovative approach has brought them to the attention of many big name corporate clients, including Olly Murs, Arnold Schwarzenegger, The Queen and BBC Radio 2 who invited them to make a live appearance for an exclusive 30 minute appearance where they spoke and sang about Doo-Wop with Jeremy Vine.

They will travel “absolutely anywhere” and have performed in every single county, most cities and all corners of the UK at over 500 weddings and 1,000 corporate events.

After booking, speak directly with The T-Tones.