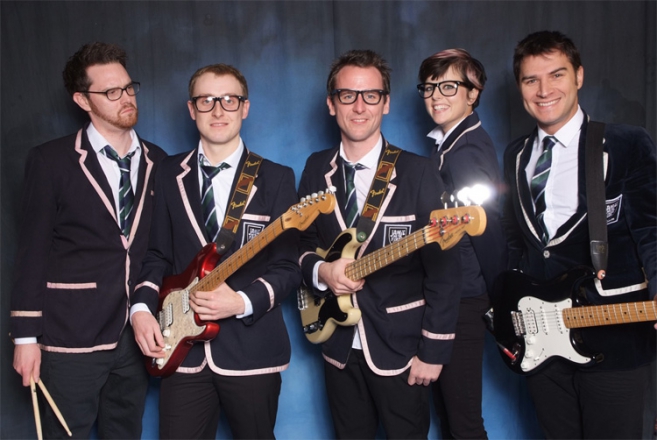 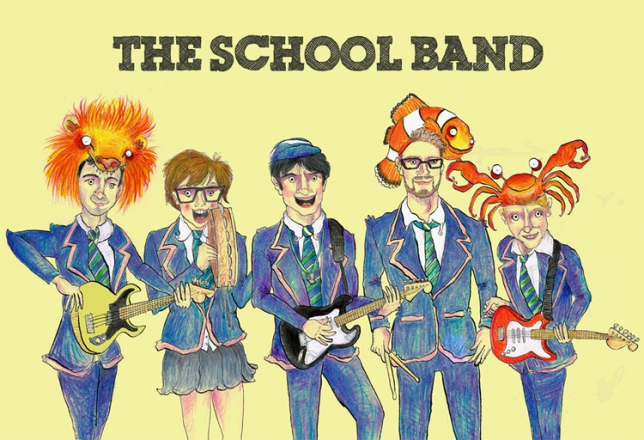 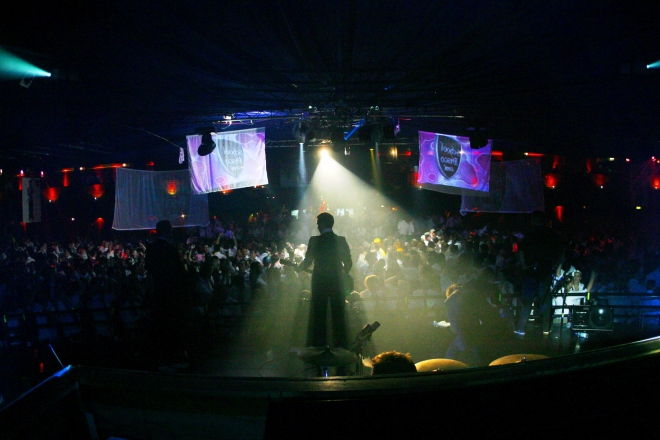 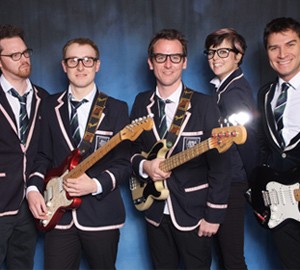 The School Band are the ultimate rock and pop band based in Berkshire. With five energetic members, comprising of guitar/vocals, lead guitar, percussion, drums & bass, they were ‘the resident band for School Disco.com when it was at Hammersmith Palais!

“You guys were totally awesome.”

You guys were totally awesome.

“Thank you for such a wonderful summary!! You guys were totally awesome and just kept us on our feet all night! Seriously, anyone thinking of booking The School band – DO IT! you will NOT regret it. The whole band were fantastic, ..we are just waiting for our next chance to see you guys again! And to top it all your DJ was superb, the only down side was that the night had to end.”

You were fantastic and created an instant party!

“Thank you so much for your brilliant sets at Claire and Dan's wedding on Friday. (I am Claire's mum). You were fantastic and created an instant party! It was everything that Claire and Dan wanted; a great band, a busy dance floor, a great atmosphere. I don't think I sat down all evening! Everyone loved you. Over the weekend we have been talking about when we will book you again; never a better excuse for a party! Thank you so much once again for such a fabulous contribution to what was a magical day in every way!”

“Thank you for being so amazing at our wedding. When we were planning our wedding, good music was really important for us and a big element of the day. We loved you the first time we saw you in 2013 at an event and you were even better at our wedding. You sounded absolutely fantastic. got everyone dancing and were really fun. I lost count of how many people told me have great you were. We loved the Djing too! Thank you again.”

You were just fantastic!

“Thank you so much for performing at Abbie and James’s wedding. You were all simply amazing and you made the party go with a swing. Everybody has mentioned in their letters the wonderful band and you were just fantastic. Dancing all night long. Thank you for agreeing to play and in such a gracious way. You were considerably different to other bands. We just love what you did, it really gave it a special feel to the day. We hope you will play again for us if we have another do? Good luck with all your events and would love to know when you are in the North again. Ali and Roger”

I just wanted to say a personal thank you to you and the guys for what can only ...

“I just wanted to say a personal thank you to you and the guys for what can only be described as the most unbelievable night we’ve ever had. You guys were awesome and me and Libby cannot thank you enough. Words just don’t come close to how happy we are. When we are back from honeymoon we would love to meet up with you and take you out to say thank you, also you are the nicest and coolest people! Thanks once again”

Most Alive Network artists travel UK wide and internationally. Get a guide price instantly by clicking the 'get quote' button and entering your event date and location. Make an enquiry and we will liase directly with The School Band to confirm price, availability, and the provide you with a confirmed quote.

‘The kind of band impossible not to like’ THE STAGE

The School Band are a school themed band who have performed over 1000 shows and toured over 30 countries. They repertoire boasts over 200 hit songs from The Kings of Leon, Queen, The Killers to Otis Redding and The Rolling Stones: there is literally something for everyone. To top it off, this highly sought after group have released three albums which have been downloaded over 500,000 times.

Last years highlights included performing at the Nokia Christmas party, being the band selected to entertain those Rovio techies at the exclusive launch of the new (and super cool) app, ‘Angry Birds Go’, being re-booked to perform at the annual sales rally for Sony Playstation, Sega and EA Sports, and being chosen to perform at The 50th Anniversary of Toyota Corolla at London Guildhall.

The School Band are often found performing at weddings and private events at venues such as The Hilton (Park Lane), Cliveden, Old Trafford, Villa Park, Stamford Bridge and The Great Room at Grosvenor House (Park Lane). They are highly experienced in performing at every type of events from small stages in marquees to the Pyramid stage at Glastonbury Festival.

During their performance, The School Band will teach you a lesson or two in the art of making music! Putting their own spin on classic party songs, The School Band cram hit after hit into their tight, non-stop high energy, entertaining show. Year after year they have grown and developed into one of the most booked bands in the UK.

The School Band are highly experienced, having been in the industry over 15 years. They know what songs work and which order, they use only the best equipment (ask them, they’ll show you), they’ll answer any questions you have and they are one of the most hard-working genuinely decent bands around. Oh and they wear animals hats on their heads. What’s not to love?

Our advice? Book these guys early!

After booking, speak directly with The School Band.