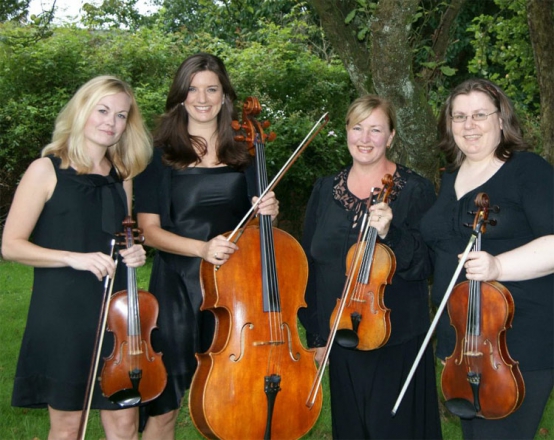 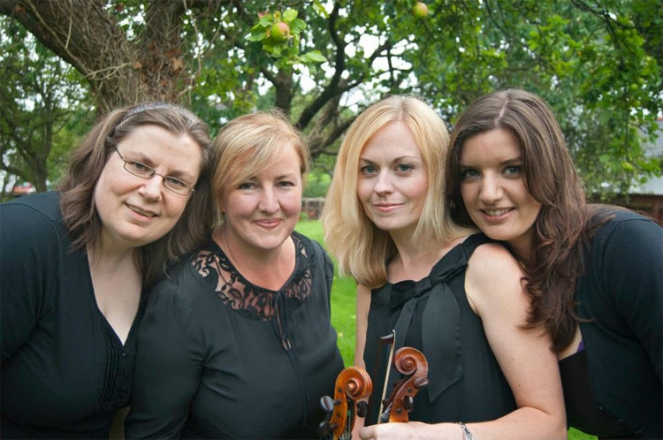 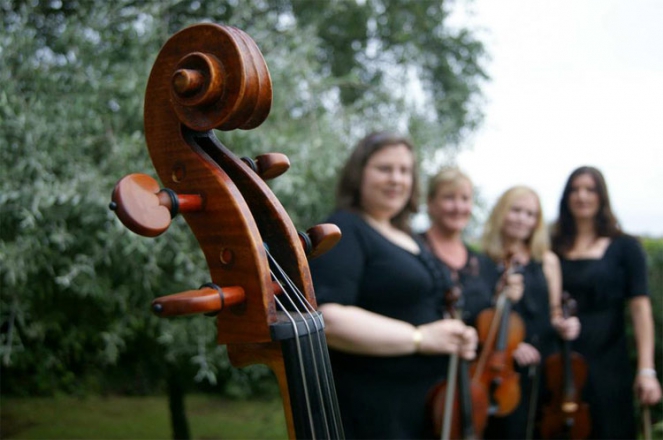 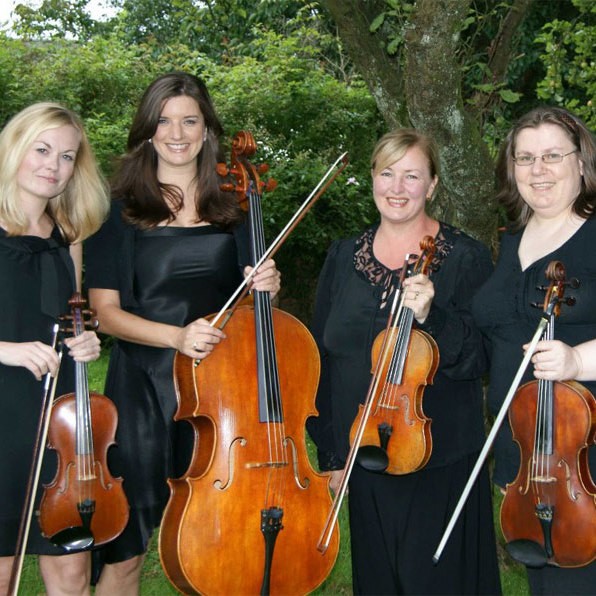 Pop Music
It Had to be You (Frank Sinatra)
If I Fell (Beatles)
Lady Madonna (Beatles)
Hello Goodbye (Beatles)
The Fool on the Hill (Beatles)
Got to get you into my Life (Beatles)
Michelle (Beatles)
I Feel Fine (Beatles)
Strawberry Fields Forever (Beatles)
Eight Days a Week (Beatles)
I Should be so Lucky (Kylie)
Like a Prayer (Madonna)
Runaway (The Corrs)
Angels (Robbie Williams)
Eternal Flame (The Bangles)
Crazy in Love (Beyonce’)
Hit me Baby (One more Time) (Britney Spears)
Love me tender (Elvis)
Can't help falling in love (Elvis)
Signed Sealed Delivered (Stevie Wonder)
All You Need Is Love (The Beatles)
I do, I do, I do (ABBA)
Let it Go (Frozen )
Stand By Me (B King)
I Gotta Feeling (Black Eyed Peas)
Chasing Cars (Snow Patrol)
Here, there and everywhere (The Beatles)
Your Song (Elton John)
One Day Like This (Elbow)
God Only Knows (Beach Boys)
The Scientist (Coldplay)
Love me like you do (Ellie Goulding)
Bohemian Rhapsody (Queen)

We loved them and so did our guests

“The Quartet were absolutely brilliant and more than lived up to our expectations.  We loved them and so did our guests.”

The Radyr Quartet were brilliant.

“The Radyr Quartet were brilliant - they played beautifully and added so much to our wedding day. They also made a lasting impression on us and all our friends and family, who are still talking about them! Also, they were friendly and easy to deal with that they made choosing the music a real pleasure. We cannot recommend them highly enough!”

Price from £646 + travel from Glamorgan

Most Alive Network artists travel UK wide and internationally. Get a guide price instantly by clicking the 'get quote' button and entering your event date and location. Make an enquiry and we will liase directly with The Radyr Quartet to confirm price, availability, and the provide you with a confirmed quote.

Rebecca, Ceri, Verity and Laura decided to formed The Radyr Quartet after meeting through the City of Cardiff Symphony Orchestra, with which the girls still regularly perform. Although in its infancy, the Radyr Quartet have played at a number of venues in the South Wales area. The girls have a huge choice of music ranging from Baroque to Pop and are happy to adapt their performances to suit any occasion.

Meet The Quartet
Rebecca - Violin 1
Rebecca is the lead violin of The Radyr Quartet. Rebecca has played the violin and piano since she was seven years old winning many medals for both instruments at the South Glamorgan Festival for Young Musicians. Rebecca performed with the Cardiff County and the Vale of Glamorgan Youth Orchestra for six years and was awarded the prestigious Conductor Laureate Award which was ...presented at her final concert with the orchestra in 2001.

Whilst at University, Rebecca was also awarded a choral scholarship with the world renowned Trinity College Chapel Choir with whom she travelled the world, undertook recordings and live broadcasts on BBC Radio 3.

Since graduating in 2001, Rebecca has played with a number of ensembles including The Kensington Chamber Orchestra, The Central England Ensemble and The City of Cardiff Symphony Orchestra. As well as lead violinist of The Radyr Quartet, Rebecca is also sings with Cantemus Chamber Choir in Wales.

Ceri – Violin 2
Ceri studied Music at Oxford University and works as an Executive Producer in Interactive with the BBC in Cardiff. A former pupil of Leonard Hirsch and Emanuel Hurwitz, Ceri has played the violin with a myriad of groups, including the National Youth Orchestra of Wales, the Oxford and Cambridge Chamber Orchestra and the Young Musicians’ Symphony Orchestra, London. Now back in Wales she plays with the Cardiff Symphony Orchestra and of course with The Radyr Quartet.

Particularly interested in music education, Ceri has taught primary music groups both in the UK and abroad and has set up rock and music technology youth projects for Community Music Wales/the Arts Council of Wales. She is a trustee of the Parry Williams Music Scholarship for the University of Wales, Bangor.

Ceri is married, with two teenage daughters and a tortoise.

Verity - Viola
Verity's journey towards becoming a Violist is something of a sequence of accidents. She first began playing the violin at the age of 8 following an open invitation to start free lessons in a Primary School assembly. In her teens, she earned a scholarship with the Welsh College of Music and Drama to study the violin, and went on to the City of Leeds College of Music (now the Leeds College of Music) where she made the fortuitous decision to switch to the viola after being essentially ordered to by the College viola tutor.

Returning to Cardiff, she went on to study a postgraduate diploma at the Welsh College of Music and Drama, and now plays in a range of ensembles and chamber groups around Cardiff and South East Wales including the St Woolos Chamber Players and the Cardiff Bach Orchestra. She has played with the City of Cardiff Symphony Orchestra since 1992, and is currently Principal Viola.

Verity has always been particularly keen on small scale music, having played in a number of string quartets over the years - and continuing to play with friends purely for the pleasure of doing so alongside playing with the Radyr. When not making music, she works for the Welsh Government.

Laura - Cello
Laura began learning to play the piano and then the cello from the age of 5. As a teenager, she studied cello with Kathryn Rhian Price and attended the Junior Department of the Royal Welsh College of Music and Drama. Around the same time, she progressed to principal cellist of the Gwent County Youth Orchestra and was accepted to play with the National Youth Orchestra of Wales, touring the cathedrals of Wales. She also tutored children in piano and cello, entering them for Associated Board of the Royal Schools of Music examinations.

Laura went on to study law postgraduate. She qualified and practised as a corporate solicitor in both London and Sydney. During this time, she kept her love of music alive playing with the London Phoenix Orchestra. Her passion for the arts brought her to her current studies and freelance work in Interior Design. And on returning to Wales, she began playing with the City of Cardiff Symphony Orchestra. There, she re-found a long lost friend from the Welsh College of Music and Drama, Rebecca, and they now play together again in the Radyr Quartet.

Please note: Advertised prices include sets plus small breaks in between. Breaks longer than 15 minutes between sets will be charged for. The rate is £96 per hour.

After booking, speak directly with The Radyr Quartet.