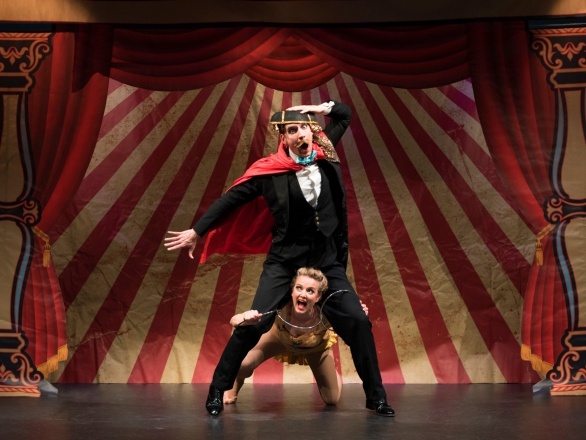 A comedy magic show with a twist! It's full of surprises and has an assistant who knows how to say it like it is! Levitation, comical contortion and jaw dropping escapes. Adult and family audiences love this theatrical escapism at its best.

Most Alive Network artists travel UK wide and internationally. Get a guide price instantly by clicking the 'get quote' button and entering your event date and location. Make an enquiry and we will liase directly with The Norvinis to confirm price, availability, and the provide you with a confirmed quote.

This entertaining award winning double act has appeared on prestigious stages with their show throughout UK, internationally and live television. It's an energetic show of magical escapism at its best.

The Norvinis are a fabulous comedy magic and variety act in a league of their own. They seem to be the classic commanding magician and adoring assistant… but magic is never what it first may seem! Norvinis turn the prototype of the Vaudeville magic act on its head in their show full of comical curveballs. This showbiz delight leaves audiences awestruck with smiles on their faces.
THE TOP HAT SHOW (INDOOR / OUTDOOR)
This is their show on an amazing giant top hat that’s fully equipped with its own PA system. They perform feats including their breathtaking balancing on the broom act, a twinkling tap dance, and a sassy escape from the sack of secrets.
STAGE SHOW (INDOOR)
Instead, they can perform on your own indoor stage or performance area with a show to knock the socks off your guests. This can feature their hilarious flying table scene, comedy contortion ballet, and gobsmacking escape from a trunk with quick change.
References and press:

"A beautifully paced and spellbinding act."
- The Stage

"I've had so many positive comments from my colleagues. The show was action packed, lively, energetic and fun! Everyone thought it was fabulous!"
- E. Samson, Montanaro

"It's an act that's different from other illusionists. We're very happy we found you!"
- L. McDonnell,Business Continuity Institute

The Norvinis have performed at The Magic Castle (LA), on the West End, The Wintergarten (Berlin) and on tele. They are performed by an actor and Magic Circle magician alongside a Guinness World Record acrobat and dancer. Their work is created in part with support from Arts Council England.

*Please note: The Norvinis do not provide PA and lighting but are happy to work alongside your DJ or production team at your event. Client also pays for the day's parking.

After booking, speak directly with The Norvinis.