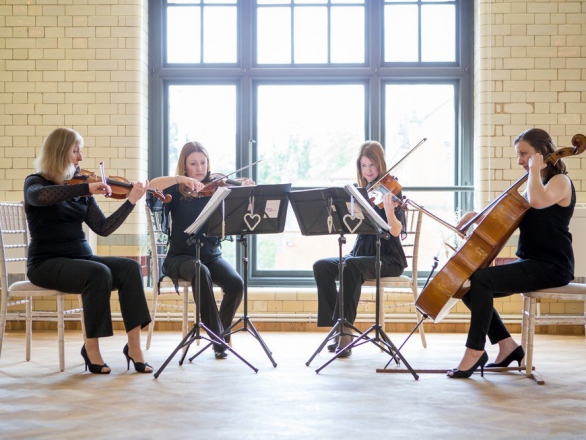 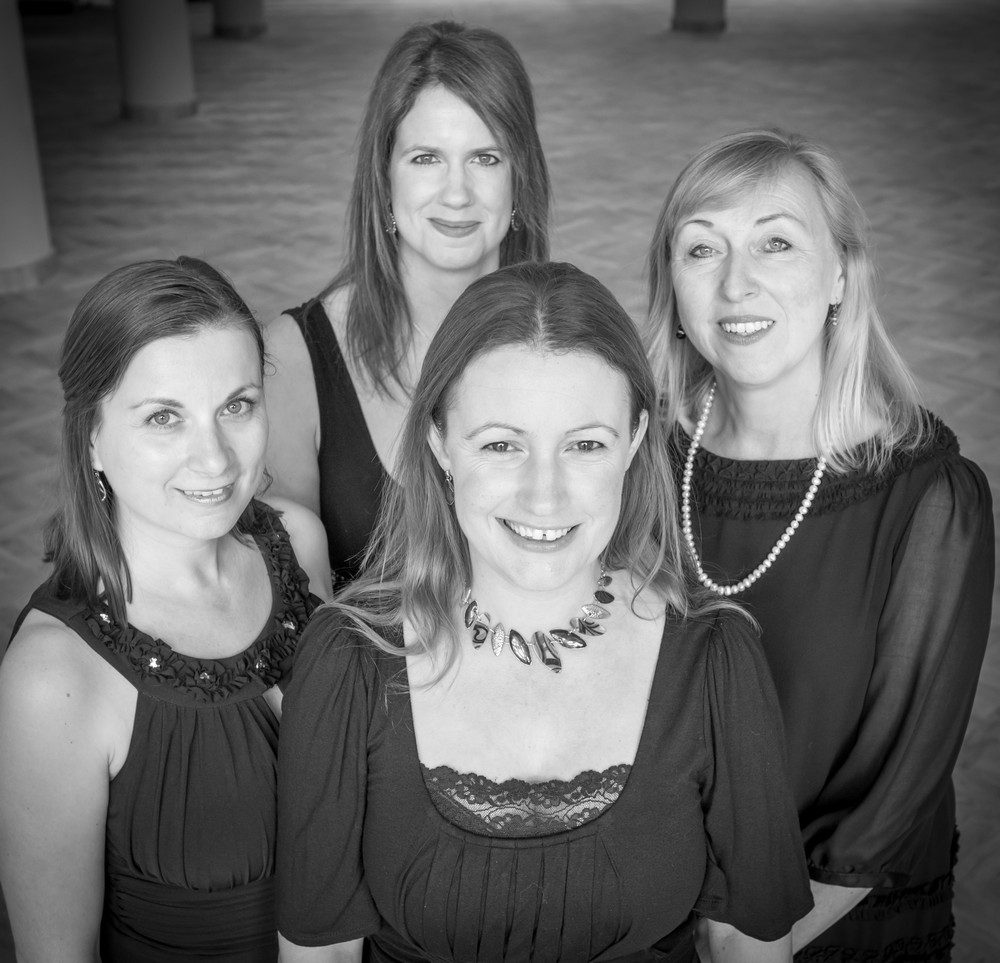 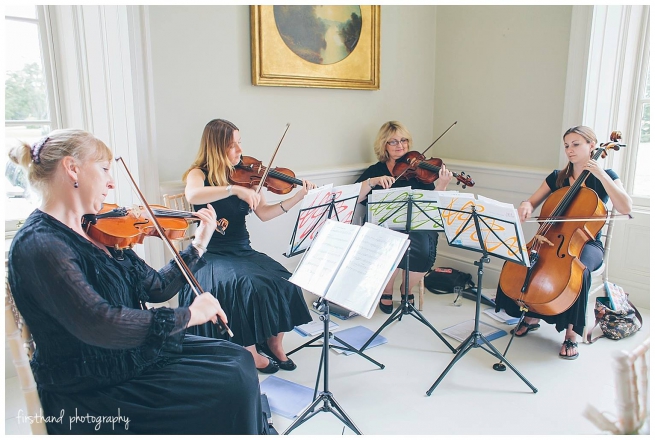 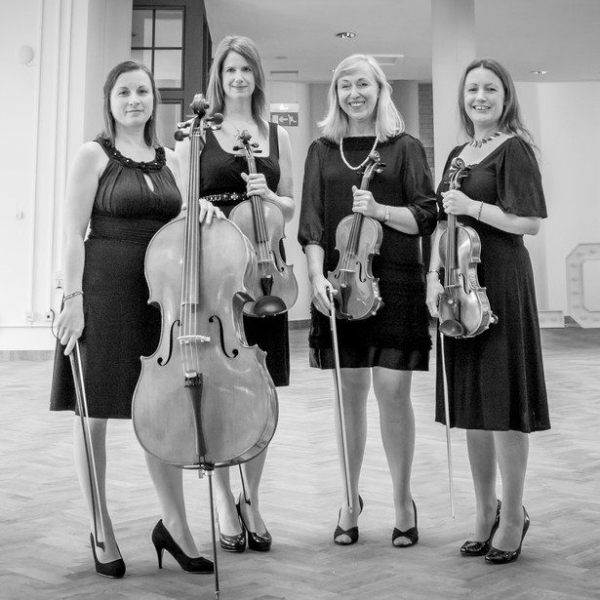 The Midlands String Quartet are a popular & elegant all female professional string quartet, performing an eclectic repertoire from Bach to the Beatles, ideal for both wedding & corporate functions. Electric instruments available!

Musicals
All I ask of you - Lloyd Webber
All that Jazz - Kander
America from West Side Story - Bernstein
Anything Goes - Cole Porter
Beauty and the Beast - Alan Menken
Can you feel the love tonight - Elton John
Chicago - Fred Fisher (listen)
Consider Yourself – From ‘Oliver’
Edelweiss - Rodgers and Hammerstein
Get me to the Church on Time - Loewe
Happy Talk - Rodgers & Hammerstien
Hernando’s Hideaway - Alder & Ross
I Could Have Danced All Night - Lerner & Lowe
I feel pretty - Bernstein
Leaning on a Lamppost - George Formby
Love Changes Everything - Andrew Lloyd Webber
Music of the Night - Lloyd Webber
Officer Krupke from West Side Story - Bernstein
On the Street where you live - Loewe
One Hand, One Heart - Bernstein
Puttin’ on the Ritz - Berlin
Raindrops keep falling on my Head - Bacharach
Smoke get in your Eyes (from Roberta) - Jerome Kern
Sunrise, Sunset - Jerry Bock
There’s no Business like Show Business - Irving Berlin
Think of Me - Lloyd Webber
Tonight from West Side Story - Bernstein
Walking the Dog - Gershwin
Wedding Procession from Sound of Music - Rodgers and Hammerstein

Christmas
Rudolph the Red Nose Reindeer
Stop the Cavalry
Rockin’ around the Christmas Tree
I Wish it could be Christmas Everyday
Merry Christmas Everybody
Santa Baby
Happy Christmas (War is Over)
Mary’s Boy Child
I’m Dreaming of a White Christmas
Let it Snow
Have Yourself a Merry Little Christmas
All I want for Christmas is you
Fairytale of New York
Frosty the Snowman
Santa Baby
The Christmas Song-Chestnuts roasting…
Last Christmas
Its Beginning to look a lot like Christmas
Jingle Bells
Jingle Bell Rock
Sleigh Ride
Have Yourself a Merry Little Christmas
The Holly bears a Berry
Winter Wonderland
Away in a Manger
Ding Dong, Merrily on High
God rest you merry Gentlemen
Hark! The Herald Angels Sing
O Come all Ye Faithful
O Little Town of Bethlehem
Once in Royal David’s City
The First Nowell
Deck the Hall
Joy to the World
Angels from the Realms of Glory
The Holly and the Ivy
Silent Night
Troika
We three Kings
While Shepherds Watched
Christmas Concerto (Corelli)
Sleigh Dance (Mozart)
And many more Christmas carols

“Perfect background music to suit all tastes and budgets. The strings were great. Really listened to what we wanted and performed. Guest were surprised and enjoyed them immensely.”

Price from £621 + travel from Nottinghamshire

Most Alive Network artists travel UK wide and internationally. Get a guide price instantly by clicking the 'get quote' button and entering your event date and location. Make an enquiry and we will liase directly with The Midlands String Quartet to confirm price, availability, and the provide you with a confirmed quote.

The Midlands String Quartet is one of the most renowned and prolific quartets in the Midlands. This all female string ensemble has over twelve years experience of playing at weddings and corporate functions all over the UK and further afield. Formed in Nottinghamshire in 1996 each member studied in London at the top three music conservatoires; the Royal Academy of Music the Royal College of Music and the Guildhall School of Music.

Professional and vibrant, The Midlands String Quartet play an eclectic playlist mixing classical music with lighter numbers jazz and popular repertoire. The quartet's versatile repertoire includes music to suit any occasion - from Beethoven to Bohemian Rhapsody! Some of their more modern repertoire has been specially arranged for the quartet and are unique to the quartet.

The Midlands String Quartet has played at weddings and corporate functions in some of the country's finest venues including Tower Bridge, Chatsworth House, Knebworth House, The Royal Courts of Justice, Burghley House and Woburn Abbey. They have even played for weddings on Guernsey and in France a corporate event in Brussels and performed concerts in the Caribbean including one on the exclusive island of Mustique.

The Midlands String Quartet's clients include Mercedes-Benz, Boots, the RAF, Capital One, HSBC, Proctor and Gamble, English Heritage and the BBC.

Previous engagements include playing in venues such as;

Bring a touch of class to your wedding….

The Midlands String Quartet have been entertaining wedding guests since 1997 and have extensive experience of tailoring their repertoire to create the right mood for your special day. Their repertoire is designed to suit church services, civil ceremonies and civil partnership ceremonies and they will gladly offer advice about which music to consider. For church services The Midlands String Quartet can also play hymns.

Here are some suggestions for music for your service / ceremony:

* For civil ceremonies please check with your registrar

Hymns
Praise My Soul
I Vow to Thee my Country
Jerusalem
Sing Hosanna
Guide Me O Thou Great Redeemer
Morning has Broken
Dear Lord and Father of Mankind
All things Bright and Beautiful
Love Divine (both versions)
Hail, Queen of Heaven
Amazing Grace
Lord of all Hopefulness
How great Thou are
O Jesus I have Promised
Be still, for the presence of the Lord
One more step along the World I go
I am the Lord of the Dance

(They can also arrange other hymns for a small fee)

After booking, speak directly with The Midlands String Quartet.