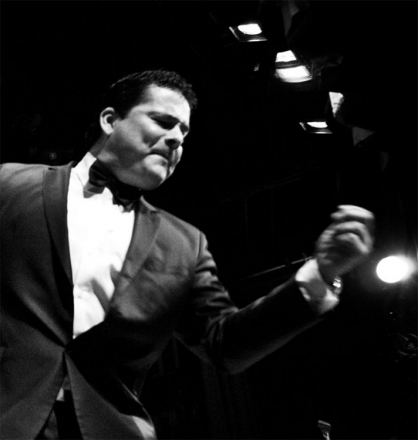 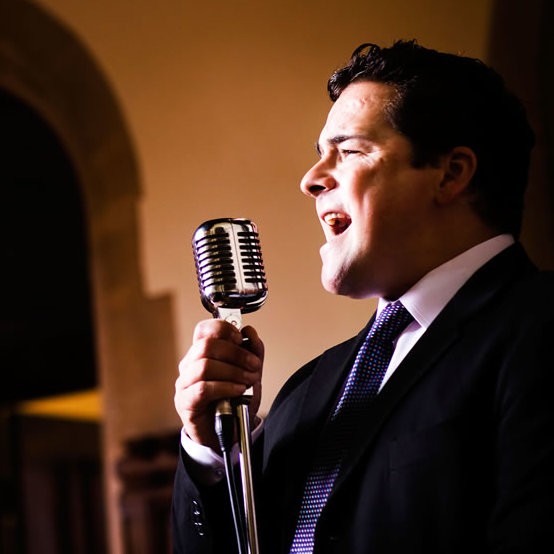 Matt Thomas & his amazing 11 piece big band recreate the sound of the roaring 40's with wonderful music from Frank Sinatra, Glen Miller & more! With style, charm & sophistication, this spectacular show will make your event one to remember!

Dean Martin
Ain’t that a kick in the head?
Everybody loves somebody
That’s amore

Bobby Darin
Beyond the sea
Clementine
Mack the knife

“The Russell Shaun Big Band were fantastic. They were perfect professionals from start to finish and the performance was unbelievably good. We would definitely recommend them and re-book them if we have the opportunity.”

“Russell was unbelievable, really provided a fantastic big band and authentic sound that made our event. 300+ people all happy, not a single complaint, plus at least 3 people approached me afterwards to find how they could book Russell for their own functions. 10 out of 10. Finally, really liked Russell as a person – polite, approachable and all round professional, top guy.”

His performance was fantastic

“Russell Shaun was excellent to deal with and looked the part. His performance was fantastic and very positive comments were received from the guests.”

All was very easy. Russell was a very professional guy and I would definitely re...

“All was very easy. Russell was a very professional guy and I would definitely recommend your company and Russell Shaun again.”

Russell Shaun and his band turned up to our wedding venue early and were set up ...

“Russell Shaun and his band turned up to our wedding venue early and were set up and ready when our evening guests started to arrive. They were all very smartly dressed. Russell accommodated us well by setting up and playing our first dance song with out any problems. Russell's performance's was fantastic, his voice was amazing, we had a lot of compliments about the group and would not hesitate to book them again. A big thank you to Russell Shaun and his band for making our evening just perfect, and Alive Network for making it so easy to book. Would highly recommend both to anyone!”

Most Alive Network artists travel UK wide and internationally. Get a guide price instantly by clicking the 'get quote' button and entering your event date and location. Make an enquiry and we will liase directly with The Matt Thomas Big Band to confirm price, availability, and the provide you with a confirmed quote.

Is there a more spectacular sight or sound than when a big band hits the stage?

With the cool rhythm section setting the tempo and the brass section starting to swing with 3 trumpets, 3 saxophones and 3 trombones, The Matt Thomas Big Band brings back to life the true sound of the roaring 40’s!

Let The Matt Thomas Big Band fill the air with Sinatra’s wonderful songs, not to mention iconic music from the Glen Miller era, Duke Ellington and Count Basie. Matt and his band can also weave more contemporary material into any show by performing songs from the Robbie Williams swing album and of course the sensational Michael Buble!

As well as incredible live entertainment, Matt can also provide a DJ service between the Big Band's live sets should it be required.

Meet Matt Thomas
Being the son of an ex BBC Big Band recording artist, it came as no surprise that Matt Thomas followed in his father's footsteps and has carved out a successful career performing the very best Swing across the UK and Europe.

Always in great demand, Matt has performed for prestigious corporate clients such as Ferrari, Bentley and Jaguar as well as entertaining guests at private parties and weddings for David Beckham and many other celebrities!

Matt was also chosen to sing at the wedding of England and Manchester Utd footballer Wes Brown and his performance was highlighted in OK Magazine.

After 15 years in the business, Matt’s professional approach and outstanding talent is second to none!

After booking, speak directly with The Matt Thomas Big Band.