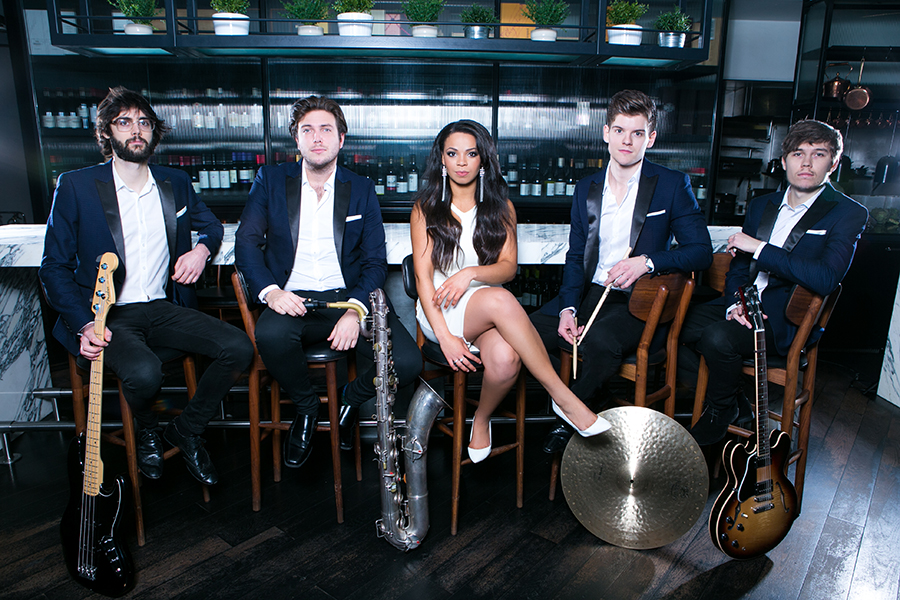 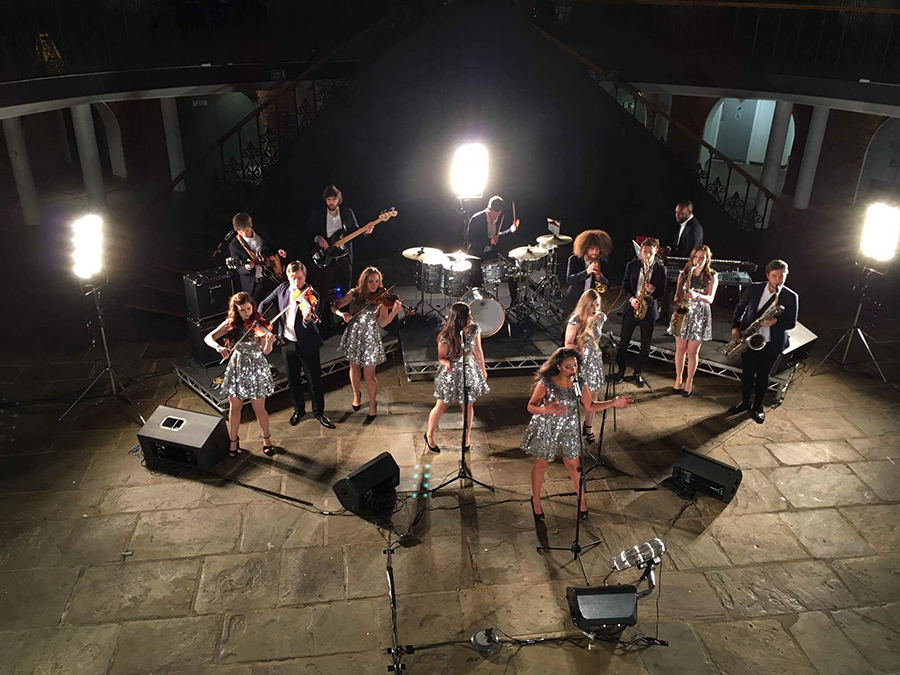 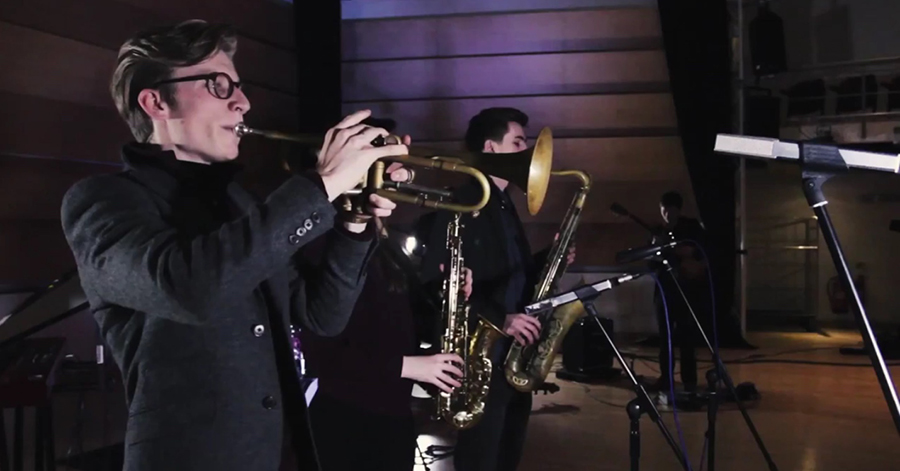 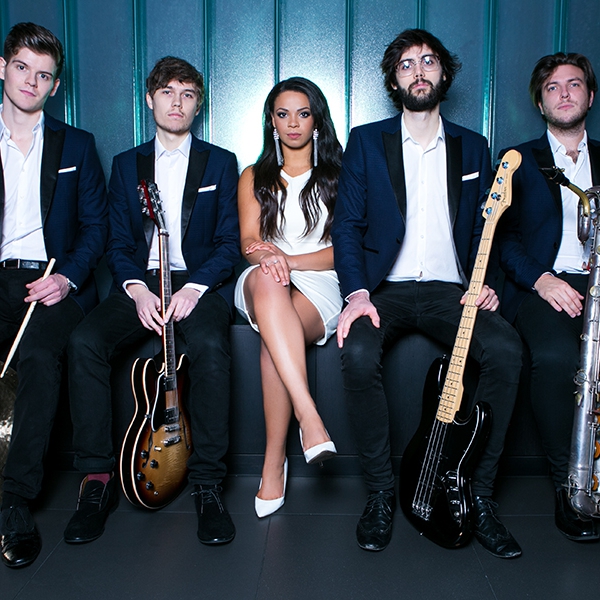 The Groove Line are a professional Pop Funk band with a fantastic sound, style & repertoire! Graduates of Leeds College Of Music, the band have a wealth of performance experience & will kick start your party with music from Mark Ronson, Amy Winehouse, Prince, Bruno Mars & more! ...

Most Alive Network artists travel UK wide and internationally. Get a guide price instantly by clicking the 'get quote' button and entering your event date and location. Make an enquiry and we will liase directly with The Groove Line to confirm price, availability, and the provide you with a confirmed quote.

With addition of Keyboard

* 4 and 6 piece band available in booking options.
* The Groove Line are also available as a 7-14 piece custom show band. Please speak to an Alive Network co-ordinator for a bespoke quote.

Groove Line are a premium, energy-driven pop, soul and dance band consisting of some of the UK’s most talented and professional musicians, who have performed at prestigious events and venues across the country. The combined and varied skill of the individual musicians provides huge capability for the band’s sound and repertoire, making them a first choice in entertainment to suit any occasion. The band’s sound is fresh, upbeat and current, and the show is always dance-floor filling.

The band provide several sized options to suit any occasion, ranging from a 4 piece to 14 piece band, the latter of which includes a string section, brass section and backing vocalists for those events where you truly want to dazzle your guests with the extra “wow” factor. Clients have the option to pick and choose their ensemble with specifics to size, taste and event, with Groove Line always able to adapt to the context for your event.

"We were delighted with Groove Line performance at our wedding in May 2016. Cool, contemporary and very talented, the band were central to making the evening one big party, which is exactly what we wanted. The band were full of energy and appeared to be enjoying themselves as well, even performing a second encore completely off the cuff, as our demanding guests were loath to let them leave. One of our guests enjoyed it so much they were considering cancelling their own wedding band and booking Groove Line instead. The band were very accommodating with requests, going out of their way to play a first dance song that isn’t part of their usual set list. The band were easily contactable ahead of the date to answer queries and were punctual and professional on the day itself. Our only regret is that we don’t have another event we can book them for. Highly highly recommend." (Matthew – Sandburn Hall, Yorkshire 29th May)

The collection of musicians for Groove Line always ensures the highest standard show at any event; providing an energetic, versatile and tailor-built package that will always make for a memorable event. Below is a list of the band’s individual endeavors, including artists, venues, media and events they have performed for to highlight the talent involved in the band:

Great band, nice folks, some guests said they made the wedding

“The best thing I can say about these guys is that they had a full dance floor all night. They didn’t need any looking after from us as they knew exactly what they were doing the whole night. I’m so sorry I didn’t get the chance to remember their names but I have to say the young lady on bass and the chap on sax were really friendly as well as being really good. Singer was incredible, massive voice for a tiny little thing. I think has a few new fans among the younger chaps we had in attendance as well... They learned a first dance song just for us, they even allowed me, with zero musical skill or talent, to give them some directions on the arrangement. The best thing I’ll say about this is that the moment Niki and I walked in and danced to Everywhere by Fleetwood Mac was one that I’ll remember forever. Groove Line were a part of that and so I’ll remember them too. Couldn’t recommend highly enough. Thanks again guys.”

“AMAZING! What a fabulous band; the music had people up and dancing right from the start, until the end of the night. Thank you for making our wedding memorable. We have had so much positive feedback from all the guests and raving reviews of the band. Thank you once again”

Fantastic from start to finish!

“The quality of the Groove Line's performance was fabulous! We enjoyed every minute of their two sets and the music they organised for the rest of the night was brilliant! Ali, the drummer of the band, was especially wonderful to deal with, always professional and helpful. In fact all of the band were always so pleasant and made us feel special. On our wedding day Ali checked all was going to plan after the first set which was a lovely touch! Not all of the playlist we'd sent beforehand was played on the night which we only realized afterwards, but it definitely didn't spoil their brilliant addition to our wedding day!”

“They were fantastic – I was on the dance floor most of the night – everything was great – one of our guests is actually in a very successful band and he commented that the band were great. Friends and family have also commented on how good they were. With the benefit of hindsight, I wish we had had them do their sets 30 minutes later particularly the second set so the dancefloor was a bit more full but we had a great time regardless and this was in no way a reflection on the band – more on the alcohol consumption of my guests!!”

“The band were fantastic – super professional, really friendly and the students loved them! It was a very tough crowd, (international students always are with a massive range in cultures, preferences and expectations) so it was a relatively small crowd towards the end of the evening. But The Groove Line were superb, they engaged with the audience very well so we were very pleased indeed. From the onset, it’s been a pleasure working with Alive Network – super professional and great service. We hope to work with you again and would happily recommend you.”