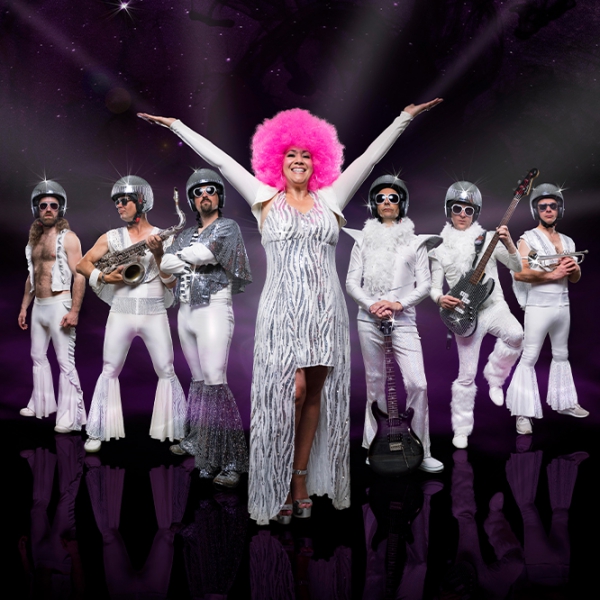 With over 20-years performing together, The Disco Experience have forged themselves a reputation as the UK’s very best disco tribute! They’ve headlined stages at Glastonbury, Standon Calling, Silverstone’s F1 & more, wowing crowds with their 'all killer, no filler' sets packed full of Disco's greatest hits!

The Disco Experience performing You Should Be Dancing - AliveNetwork.com

“Miss Disco was our stand out show of the year”

Miss Disco was our stand out show of the year

“Miss Disco was our stand out show of the year; we wish we could have them perform every weekend. Brilliant music, creating a fantastic, feel-good atmosphere. We eagerly anticipate their return!”

The band were fantastic....

““The band were fantastic, we had so much great feedback and it was one of our best conferences to date. They were so much fun and got everyone on the dancefloor. We will definitely be rebooking them for the next one!” ”

If you want a great night with a packed dance floor then book them!

“The band was amazing and the female singer was phenomenal. We had the most fantastic night, the atmosphere was brilliant. I can’t recommend this band highly enough. If you want a great night with a packed dance floor then book them!” ”

Most Alive Network artists travel UK wide and internationally. Get a guide price instantly by clicking the 'get quote' button and entering your event date and location. Make an enquiry and we will liase directly with The Disco Experience to confirm price, availability, and the provide you with a confirmed quote.

The Disco Experience can provide a DJ service featuring a laptop with DJ software, band member manning and taking requests for before, in-between and after the band's live sets.

The Disco Experience can finish performing at 1am.

The Disco Experience can finish performing at 2am.

The band can offer PA systems from 2-12k, catering for events and venues of most sizes, and tailoring the volume levels to the specific needs of the client.

For an additional fee, The Disco Experience's line-up can be augmented to include a percussionist and/or an expanded horn section. Please speak to an Alive Network booking agent for details.

The Disco Experience are the band guaranteed to get the party started!

With over 20-years performing together as ‘Uncle Funk’ & ‘The Boogie Wonderband’, these musicians have forged themselves a reputation as the UK’s very best disco tribute!

Now available as ‘The Disco Experience’, this celebrated group of seasoned musicians perform Disco’s Greatest Hits better than any other band in the UK.

With unrivalled experience, musical élan, dazzling outfits, natural showmanship and slick choreography, The Disco Experience are a life-affirming, feel-good event - as anyone who has seen them perform together over the years will testify.

The Disco Experience’s set list is the definition of “all killer, no filler”; nothing obscure, nothing indulgent, just Disco’s Greatest Hits performed 100% live. It’s a winning formula that is guaranteed to keep everybody on the dance floor and smiles on faces all night long.

After booking, speak directly with The Disco Experience.