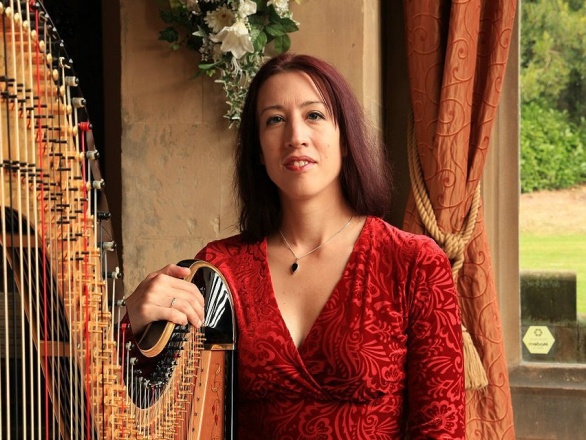 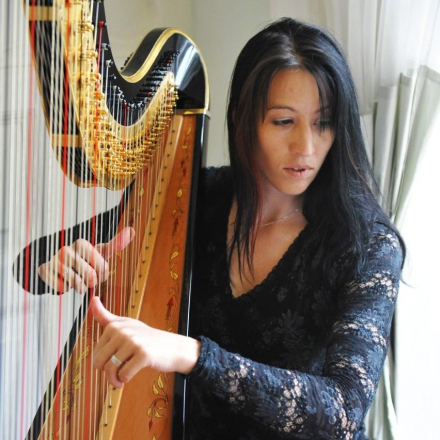 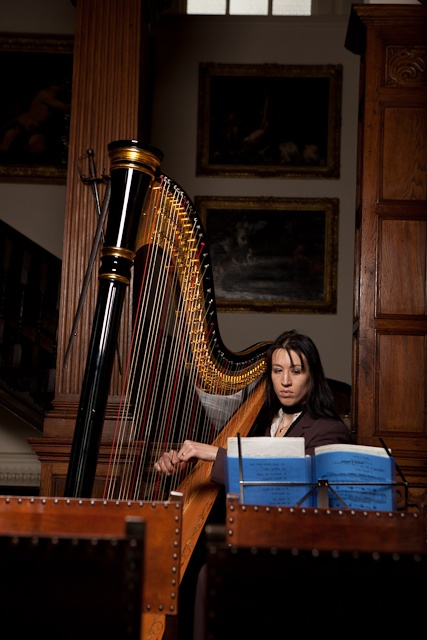 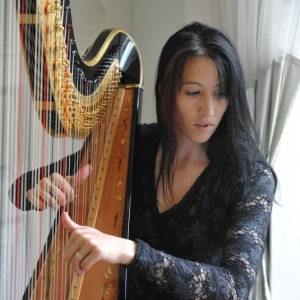 Susanna is a traditional harpist. She is an experienced professional musician and her harp music has been a part of many special occasions. Classical, traditional and pop music all appear in her repertoire; perfect as an elegant backdrop.

“Despite the weather, the event was a complete success”

Popular
American Pie (Don McLean)
And I Love Her (Beatles)
And I Love You So (Don McLean)
Annie's Song (John Denver)
Any Way You Want It (Journey)
Are You Lonesome Tonight (Elvis)
As Time Goes By (Hupfeld, from Casablanca)
Bat Out of Hell (Meatloaf)
Beautiful (Christina Aguilera)
Because You Loved Me (Diane Warren)
Bella's Lullaby (Twilight)
Bittersweet Symphony (The Verve)
Braveheart (Theme)
Can't Help Falling in Love
Clocks (Coldplay)
Close To You (Carpenters)
Closest Thing To Crazy (Mike Batt, Katie Melua)
Concerning Hobbits (Howard Shore)
Desperado (Eagles)
Echo Park (Joseph Arthur)
Endless Love (Lionel Ritchie)
Eternal Flame (Bangles)
Evergreen (Barbra Streisand)
(Everything I Do) I do it For You (Bryan Adams)
Fields of Gold (Sting)
Fix You (Coldplay)
For Your Eyes Only (Sheena Easton)
From This Moment On (Shania Twain)
Groovy Kind of Love (Phil Collins)
Hallelujah (Leonard Cohen)
Have I Told You Lately (Van Morrison)
Head Over Feet (Alanis Morissette)
Heaven (Bryan Adams)
Hello (Lionel Richie)
Hey Jude (Beatles)
Hoppipolla (Sigur Ros)
House of the Rising Sun (Animals)
How Can I Keep From Singing (Enya)
Hymne (Vangelis)
I Don’t Want to Miss a Thing (Aerosmith)
I Feel Fine (Beatles)
I Saw Him Once (Schonberg)
I Swear (All 4 One)
I'll Stand By You (Chrissy Hynde)
Into My Arms (Nick Cave)
Just Like Heaven (The Cure)
Killing Me Softly (Roberta Flack)
Kiss From A Rose (Seal)
Kissing You (Desree)
La Vie En Rose (Edith Piaf)
Lady (Lionel Richie)
Love is All Around (Reg Presley)
Love Me Tender (Elvis)
Love Theme From Conan
Make You Feel My Love (Bob Dylan)
May it Be (Enya, from Lord of the Rings)
Moondance (Van Morrison)
Moon River (Dean Martin)
More Than Words (Extreme)
My Immortal (Evanescence)
Nothing Else Matters (Metallica)
Norwegian Wood (Beatles)
Only Time (Enya)
Rabbit Heart (Raise It Up) (Florence and the Machine)
Radio Ballet (Eluvium)
Raindrops Keep Falling on my Head
Right Here Waiting (Richard Marx)
River Flows In You (Yiruma)
Road to Mandalay (Robbie Williams)
Romeo and Juliet (Dire Straits)
Romeo and Juliet (Love Theme) (Nino Rota)
Rule The World (Take That)
Runaway (The Corrs)
Sacrifice (Elton John)
Sailing (Rod Stewart)
Send in the Clowns
She (Charles Aznavour)
She's the One (Robbie Williams)
Silver Inches (Enya)
Something (Beatles)
Somewhere in Time - Theme (John Barry)
Somewhere Only We Know (Keane)
Stairway to Heaven (Led Zeppelin)
Storybook Love (Princess Bride Theme)
Take My Breath Away (Berlin)
Teahouse Moon (Enya)
Tears in Heaven (Eric Clapton)
Thorn Birds Theme
Time to Say Goodbye (Con te Partiro)
Titanic - Theme (My Heart Must Go On)
Torn (Natalie Imbruglia)
True Colours (Cyndy Lauper)
Twin Peaks Theme
Unchained Melody (Righteous Brothers)
Up Where We Belong
Viva La Vida (Coldplay)
Walking After You (Foo Fighters)
When She Loved Me (Randy Newman)
When You Say Nothing At All (Ronan Keating)
Wind Beneath my Wings
What a Wonderful World
When I Fall In Love
Whiter Shade of Pale (Keith Reid)
Wonderful Tonight (Eric Clapton)
You Do Something to Me (Paul Weller)
You Are Always on My Mind (Elvis)
You Raise Me Up
Your Song (Elton John)
You’re Still the One (Shania Twain)

Musicals / Disney
A Whole New World (Aladdin, Alan Menken)
All I Ask Of You (Phantom of the Opera, Lloyd Webber)
Baby Mine (Dumbo, Frank Churchill)
Beauty and the Beast (Tale as Old As Time)
Can you Feel the Love Tonight (Lion King, Elton John)
Circle of Life (Lion King, Elton John)
Edelweiss (Sound of Music)
I'd be Surprisingly Good for You (Evita, Lloyd Webber)
Love Changes Everything (Andrew Lloyd Webber)
Memory (Cats, Lloyd Webber)
My Favourite Things (Sound of Music)
Over the Rainbow (Wizard of Oz)
Part of Your World (Little Mermaid, Alan Menken)
Pie Jesu (Andrew Lloyd Webber) *
Pure Imagination (Charlie and the Chocolate Factory)
Some Day My Prince Will Come (Snow White)
Some Enchanted Evening (South Pacific)
Something There (Beauty and the Beast, Alan Menken)
Summertime (Porgy and Bess, Gershwin)
Sunrise, Sunset (Fiddler on the Roof)
Think of Me (Phantom of the Opera, Lloyd Webber)
When you Wish Upon a Star (Pinocchio, Leigh Harline)

Ireland
An Honest Man (Scotland/Ireland)
An Raibh tu ar an gCarriag? (Were you at Carrick?)
Banks of the Suir
The Blackthorn Stick
Brian Boru's March
Carrickfergus
Casluth
Castle of Dromore
Celia Connelan (Thomas Connelan)
Clare Island Boat Song
Danny Boy (Ireland/USA)
Eamonn a Chnuic
The Fair Headed Child
The Foggy Dew
Follow Me Down To Carlow
I Love my Love in the Morning
If I Were a Blackbird
King of the Fairies
March of Lissadell
Mna na hEireann (Women of Ireland)
Morrison's Gig
Peacock's Feather
Road to Lisdoonvarna
Sliabh na mBhan (Mountain of the Women)
Star of the County Down
Strike The Gay Harp (Moore)
The Youngest Daughter

Despite the weather, the event was a complete success

“Susanna Harp was absolutely brilliant and her performance completely matched what we were looking for. She played a selection of pieces of background music for 2 hours that provided the backdrop to an 80th party. Lovely interaction and just added the topping to what was a special day for my mum.”

“Client was very happy with the event and the performers. will book again!”

Perfect for our drinks reception

“Susanna Harp was amazing at our wedding. The music was beautiful and also calming which was great for the drinks reception. We had loads of people commenting on how good it was. She also kept an eye out for us and played our requested songs when we were close by and switched to similar music when we were pulled away for photos. This meant we could hear all our favourite songs. Absolutely brilliant!”

Surprise birthday dinner for my wife.

“Susanna's programme of music for my wife's birthday dinner was nothing short of fabulous. She is a lovely, lovely lady and a truly spectacular musician and made our event simply perfect. Thank you so much Susanna Harp.”

“Susanna Harp joined us on Valentines for a Romantic evening in Woodlands Restaurant. We've previously had singers in the restaurant on this night but found it a little over powering so decided to go for something different this year. It was perfect! She didn't demand too much attention but just enough for a beautiful background. Gemma from Alive Network was very helpful with the booking process. Will certainly be booking again. ”

Price from £286 + travel from Nottinghamshire

Most Alive Network artists travel UK wide and internationally. Get a guide price instantly by clicking the 'get quote' button and entering your event date and location. Make an enquiry and we will liase directly with Susanna Harp to confirm price, availability, and the provide you with a confirmed quote.

*She can only bring one harp to a booking, as she can't fit both in the car.*

Highlights
* Traditional harpist with many genres in her repertoire
* ...From Pachelbel to The Beatles
* Requests considered - FREE of charge if piece can be added to repertoire permanently
* Uniquely a small PA can be provided if required
* Elegant backdrop to any occasion
* Available UK wide

Susanna is a traditional harpist based in the East Midlands of England. She is an experienced professional musician and her harp music has been a part of many special occasions.

Susanna was born into a musical family and has played many instruments over the years. She has had a lifelong fascination with the harp though she came to playing the instrument relatively late. She has studied with Jean Hudson a traditional and Renaissance music specialist and some of the best known Scottish harpists such as Catriona McKay and Charlotte Petersen.

She is an experienced professional harpist with a large client base. She is resident harpist at Woodborough Hall and has played at events throughout the United Kingdom. Susanna plays at over 70 weddings per year in addition to solo performances, corporate functions and restaurant bookings.

Although rooted in the traditional music of Britain and Ireland, Susanna loves experimenting with other genres including blues, rock and even metal. She also has a large repertoire of classical and pop music which is popular with clients choosing wedding music.

Susanna plays a Pilgrim Progress, a large lever harp which has a rich tone and stunning clean design which complements both historic and contemporary settings. The lever harp is smaller than the large orchestral pedal harp, which means Susanna can easily get her harp upstairs and into tight spaces. She has a choice of two sound systems; a powerful but compact amp, which is ideal for venues at which space is at a premium. She also has a small PA system with speakers that is great for larger events.

Testimonials
"Just a short line to say how much we all enjoyed your music last Saturday - your choice was delightful, and there was definitely something for everyone's taste. Many thanks, and we hope to have an opportunity of hearing you again in the future."
Mr & Mrs H.

"Thank you very much for your wonderful playing at our civil ceremony - it really helped to make the day. Everyone commented on how much they enjoyed the music. Indeed, I think you may have gained some new harp music fans - many said they had not heard it before."
Mr T.

"Thank you so much for playing at my mothers party, the hotel were so impressed by your playing and said that they would recommend you as often as they could. Once again, thank you from all of us."
Mrs F.

"...thank you for the glorious part you played in our wedding day. The later in life you leave these things, the higher the mountain is to climb - but Saturday was just a little piece of Paradise.
Mr & Mrs S.

"Once again, thank you so much for your contribution on Saturday and for helping the day become very special. Had loads of positive feedback on your performance... Thanks again and we would most definitely recommend you to anyone taking the wedding plunge in the future."
Mr & Mrs M.

"Just had to email you to say a huge thank you for your music at our wedding on Saturday... Your music was so well played that a couple of our guests actually thought we had a CD playing! We couldn't have asked for a better form of entertainment for our wedding breakfast. May you give many more the privilege of hearing you play."
Mr & Mrs R.