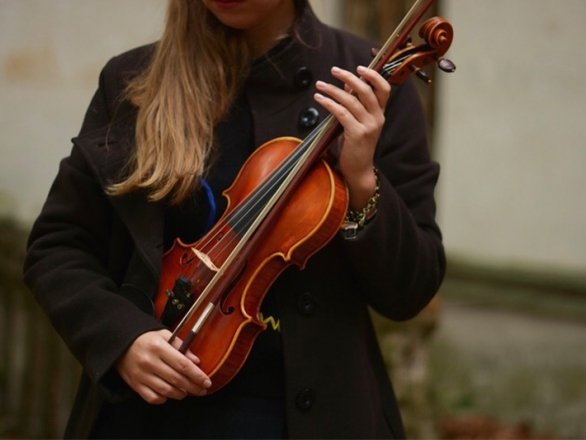 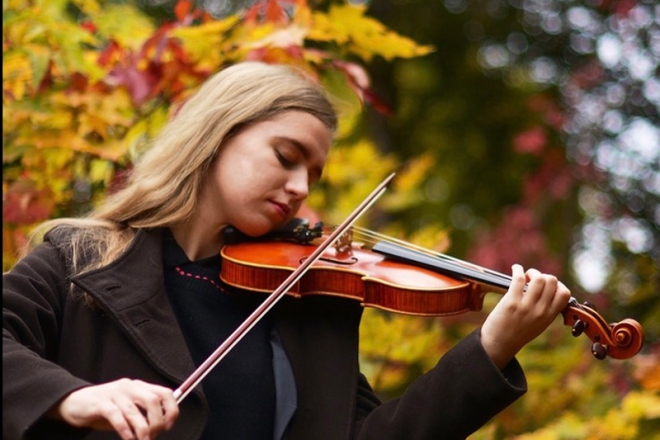 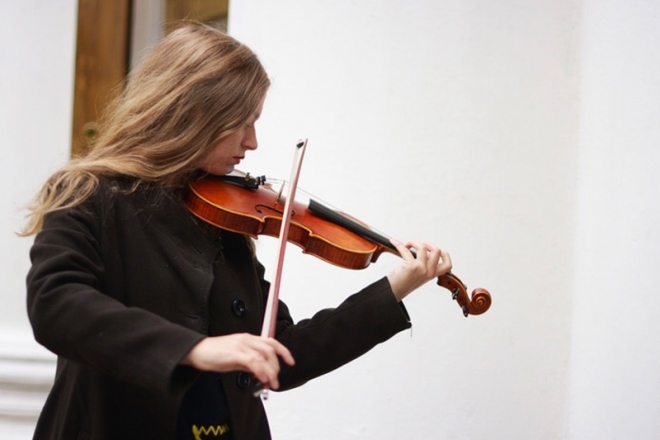 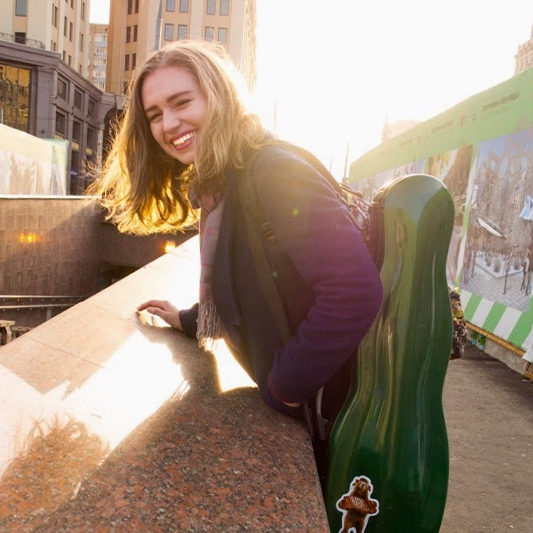 What can be said about Stacy? A classically trained violinist, young, enthusiastic, experienced and hugely talented would be a start. Stacy's repertoire includes all the wedding classics, starting from Can’t Help Falling In Love by Elvis Presley and ending with All Of Me by John Legend. The freshest take on songs not usually associated with the violin with her own distinct flavour. With songs by Ed Sheeran, Whitney Houston and Coldplay all the way to Nat King Cole. The ideal accompaniment to your wedding ceremony, drinks reception or dinner. Stacy is also able to play songs by request and also offers a bespoke service to each of her clients.

Stacy Blake - Ellie Goulding / Love Me Like You Do - AliveNetwork.com

“Beautiful addition to the day”

Pop and Classics
Perfect – Ed Sheeran
Thinking Out Loud – Ed Sheeran
Amazed – Lonestar
All Of Me – John Legend
Your Song – Elton John
How Long Will I Love You – Ellie Goulding
I Don’t Want To Miss A Thing – Aerosmith
The Luckiest – Ben Folds
A Thousand Years – Christina Perri
Iris – The Goo Goo Dolls
I’m Yours – Jason Mraz
Wherever You Will Go – Charlene Soraia
Truly Madly Deeply – Savage Garden
This Will Be (An Everlasting Love) – Natalie Cole
I’m Kissing You – Des’ree
Run – Leona Lewis
You Make It Real – James Morrison
(Everything I Do) I Do It For You – Bryan Adams
Love You ‘Till the End – The Pogues
You’re Still the One – Shania Twain
From This Moment On – Shania Twain & Bryan White
Grow Old With You – Adam Sandler
Just the Way You Are – Bruno Mars
Make You Feel My Love – Adele
Falling In Love With You Again – Imelda May
Songbird – Eva Cassidy
You Do Something to Me – Paul Weller
Come What May – Ewan McGregor & Nicole Kidman
You Are the Best Thing – Ray LaMontagne
One Day Like This – Elbow
A Moment Like This – Kelly Clarkson
Can You Feel The Love Tonight – Elton John
Marry You – Bruno Mars
Better Together – Jack Johnson
Hero – Enrique Iglesias
You’ve Got the Love – Florence + the Machine
The Reason – Hoobastank
Love Never Fails – Brandon Heath
If I Ain’t Got You – Alicia Keys
When You Say Nothing At All – Ronan Keating
No One – Alicia Keys
Halo – Beyoncé
Come Away With Me – Norah Jones
I Found You – Alabama Shakes
Everything – Michael Bublé
Everything – Mary J. Blige
Angels – Robbie Williams
I Will Always Love You – Whitney Houston
Romeo and Juliet – The Killers
Songbird – Oasis
The One – Kodaline
Us Against the World – Coldplay
You’re Beautiful – James Blunt
She’s The One – Robbie Williams
You Give Me Something – James Morrison
Unchained Melody – The Righteous Brothers
(There Is) No Greater Love – Amy Winehouse
Little Things – One Direction
The Power of Love – Jennifer Rush
I Love You – Celine Dion
One Great Mystery – Lady Antebellum
Like Teenage Gravity – Counting Crows
Thank You – Led Zeppelin
Walking On Sunshine – Katrina & The Waves
Brown Eyed Girl – Van Morrison
Next to Me – Emile Sandé
Purple Rain – Prince
At My Most Beautiful – R.E.M.
Better – Tom Baxter
Drops Of Jupiter – Train
Let Me Love You – Mario
Only Love – Ben Howard
Tenerife Sea – Ed Sheeran
The Book of Love – Peter Gabriel
What If – Colbie Caillat
I Have Nothing – Whitney Houston
She’s Got a Way – Billy Joel
Always – Bon Jovi
Everybody’s Free (To Feel Good) – Quindon Tarver
Greatest Day – Take That
I Believe In a Thing Called Love – Lemar
Love You More – JLS
My Heart Will Go On – Céline Dion
Yours – Ella Henderson
A Million Love Songs – Take That
I Knew I Loved You – Savage Garden
I Wanna Grow Old With You – Westlife
Mirrors – Justin Timberlake
Last Night On Earth – Green Day
Accidentally In Love – Counting Crows
All These Things – Elvis Costello
Be My Baby – The Ronettes
I Won’t Give Up – Jason Mraz
I’m a Believer – Smash Mouth
I’m Gonna Be (500 Miles) – The Proclaimers
Love Is All Around – Wet Wet Wet
Love Me Like You Do – Ellie Goulding
She’s Always A Woman – Billy Joel
Thank You For Loving Me – Bon Jovi
A Sky Full of Stars – Coldplay
All About You – McFly
Alone – Jessie Ware
Annie’s Song – John Denver
Budapest – George Ezra
Mystery of Love – Sufjan Stevens
Kiss Me – Sixpence None the Richer
Inside Your Heaven – Carrie Underwood
Just Like Heaven – The Cure
Love – Lana Del Rey
Over And Over Again – Nathan Sykes
You to Me Are Everything – The Real Thing
Two Hearts – Phil Collins
Loving You Easy – Zac Brown Band
Somewhere Over The Rainbow/What A Wonderful World- Israel Kamakawiwo ole

Soul and 60’s
At Last – Etta JamesCan’t Help You’re the First, the Last, My Everything – Barry White
Nothing’s Going to Stop Us Now – Starship
Endless Love – Lionel Richie & Diana Ross
It Must Be Love – MadnessFalling In Love – Elvis Presley
Something – The Beatles
Stand By Me – Ben E. King
Wonderful Tonight – Eric Clapton
Let’s Stay Together – Al Green
Let There Be Love – Nat “King” Cole
All You Need Is Love – The Beatles
The First Time Ever I Saw Your Face – Roberta Flack
The Wonder of You – Elvis Presley
Kiss From A Rose – Seal
Can’t Take My Eyes Off You – Andy Williams
Here Comes the Sun – The Beatles
I Get the Sweetest Feeling – Jackie Wilson
We Have All The Time In The World – Louis Armstrong
Fly Me to the Moon – Frank Sinatra
You’re All I Need to Get By – Aretha Franklin
Islands In the Stream – Dolly Parton & Kenny Rogers
How Sweet It Is (To Be Loved By You) – Marvin Gaye
Moon River – Frank Sinatra
The Look of Love – Dusty Springfield
Signed, Sealed, Delivered I’m Yours – Stevie Wonder
Wind Beneath My Wings – Bette Midler
Respect – Otis Redding
Hey Jude – The Beatles
L-O-V-E – Nat King Cole
Daydream Believer – The Monkees
You and I – Stevie Wonder
I’ll Be There – Jackson 5
I Belong to You (Il Ritmo Della Passione) – Eros Ramazzotti & Anastacia
La Vie En Rose – Edith Piaf
Lady – Kenny Rogers

And a selection of Bollywood music classics.

Beautiful addition to the day

“Stacy added a wonderful touch to our wedding ceremony and afternoon.”

“Stacy was amazing. She played what I requested, perfectly. None of our guests knew we were having a violinists and all said it was a lovely surprised and they all enjoyed listening to her play. Thank you Stacy.”

“Stacy performed at my wedding Saturday just gone, she was amazing, no songs we requested were any trouble for her and we had loads of compliments from our guests. Really affordable rates too. Highly recommend!”

“Absolutely amazing! Full of talent and so nice and easy to communicate with. Was very patient when we were trying to get the right version for the day but never once complained. A beautiful song and sounded stunning. Thank you so much! <3”

A big thank you to Stacy!

“Stacy was excellent and provided exactly what I requested!”

Price from £147 + travel from Greater Manchester

Most Alive Network artists travel UK wide and internationally. Get a guide price instantly by clicking the 'get quote' button and entering your event date and location. Make an enquiry and we will liase directly with Stacy Blake to confirm price, availability, and the provide you with a confirmed quote.

Stacy will learn a song of your choosing

Stacy will perform till 1am

Stacy will learn 4 songs during your ceremony of your choosing
1x 60 minute set for drinks reception
1 x 60 minute set during dinner.
This includes early arrival fee.

Stacy will play her electric violin for her performance

Please note: Stacy performs solo for all performances, the piano in her promotional video is not included with bookings.

Classically trained in Russia at the Gnessin State Musical College and continuing her studies at Royal Northern College Of Music taught by the leader of the ‘BBC Philharmonic’.  Stacy has hard earned her profile as a talented performer of some repute. Having played in such venerable venues as The Great Hall at the heart of Tchaikovsky’s Conservatory, Moscow Music Academy and the Concert Venue at her very own Royal Northern College Of Music.

Having played 100+ events in her career, Stacy has an uncanny knack of how to assemble her set lists to suit her clients needs. Whether it be a gala dinner, awards ceremony or launch party Stacy’s show is sure to perk a smile from your guests with a huge and wide ranging set list from such artists as Ed Sheeran, Greenday, Coldplay and Whitney Houston and Aerosmith.

Her repertoire reads like a who’s who of classic and modern artists and features many songs that wouldn’t usually be associated with the violin. A testament to her training and ear. Hugely flexible and accommodating she can play in multiple locations during your event, moving with minimal impact on your guests. Adept at either acoustic or electric violin and able to tailor her sound to whatever your event requires