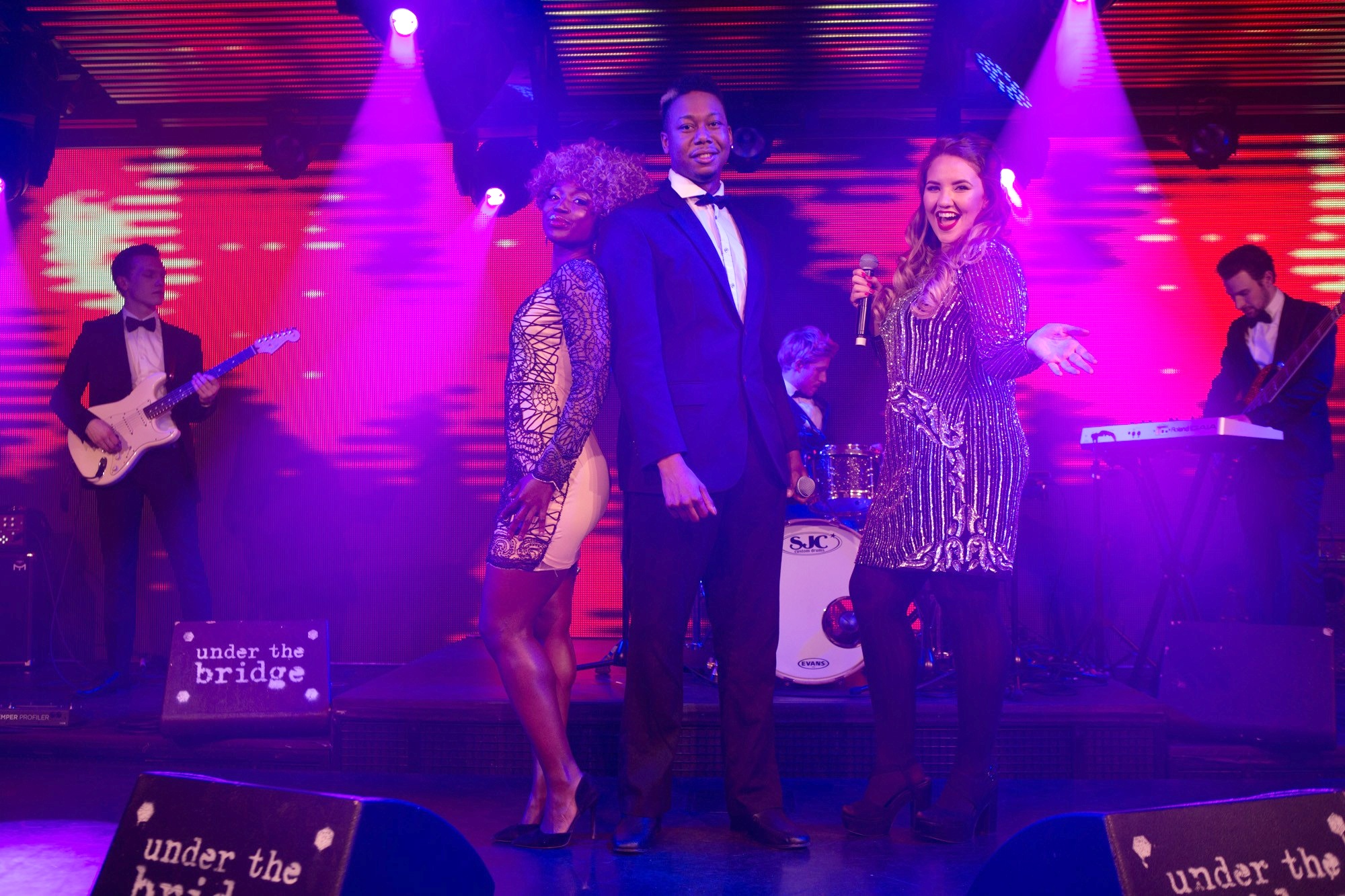 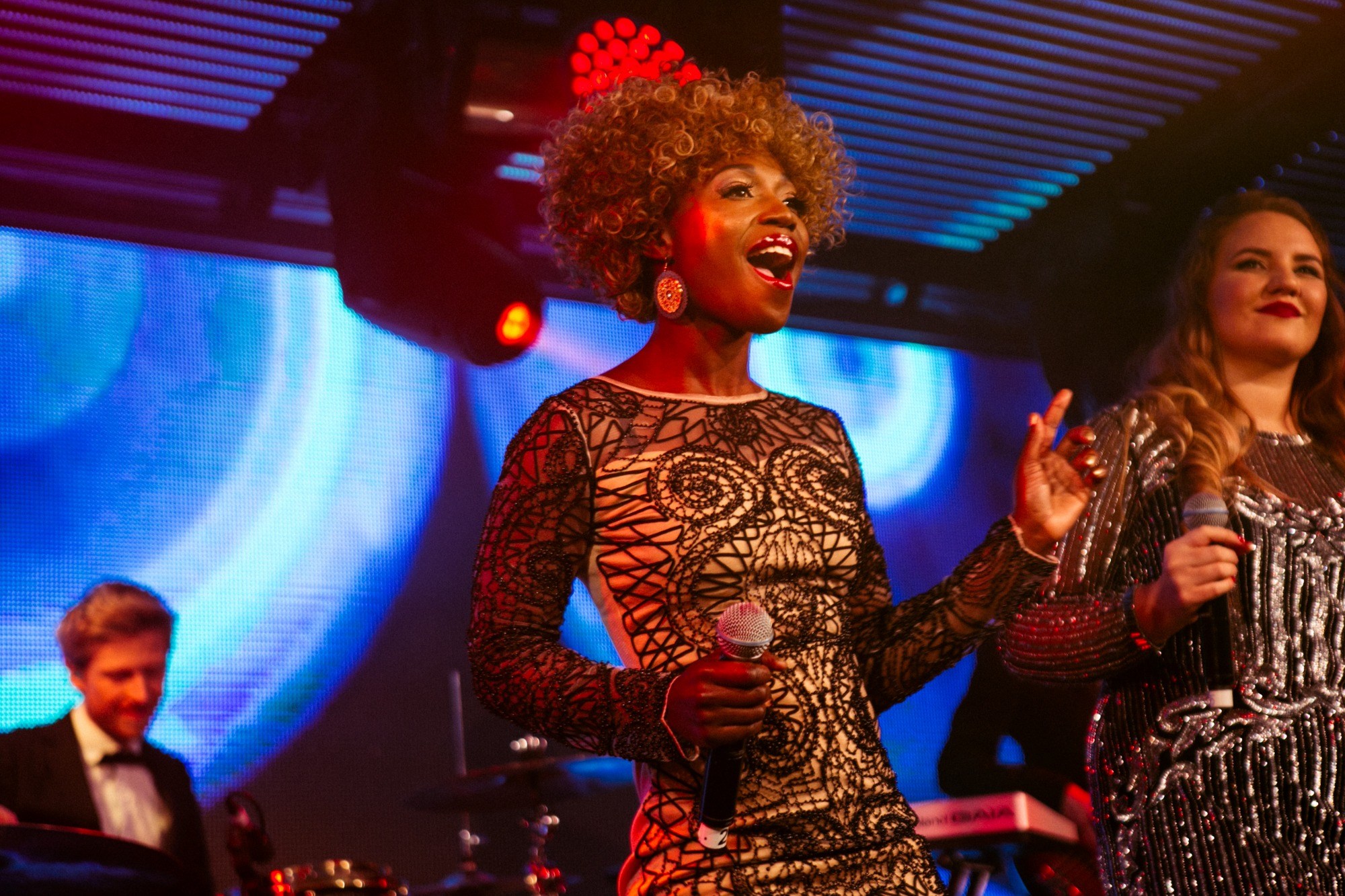 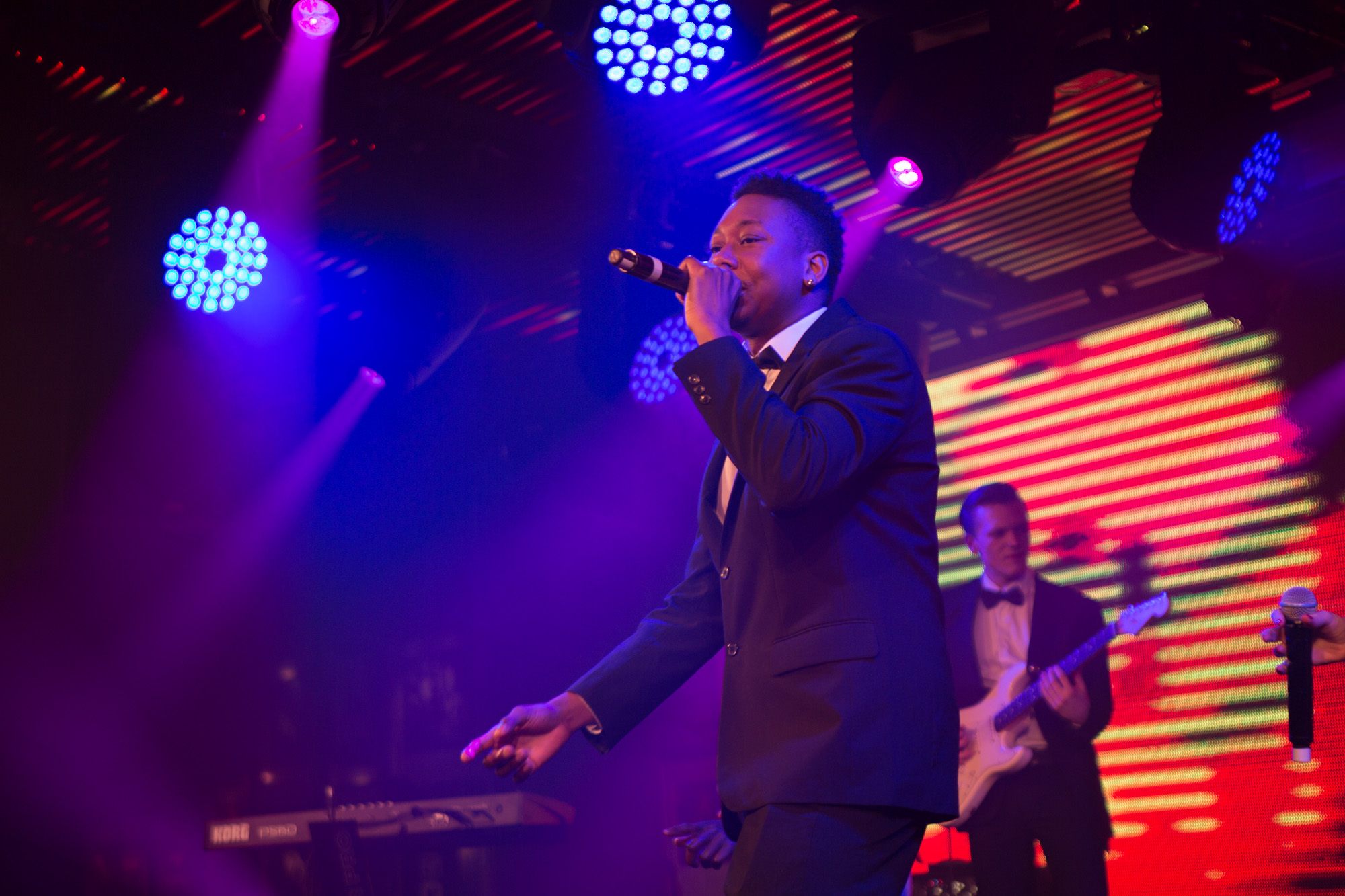 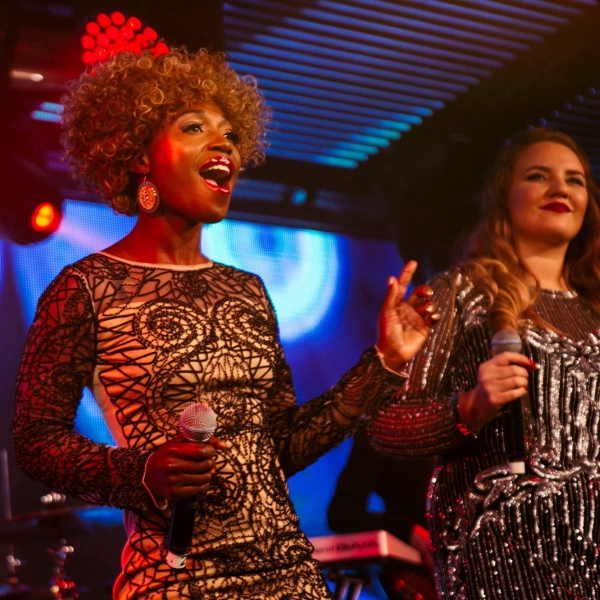 Soul Hop is a group of extremely talented musicians bringing the best hiphop, RnB, pop, soul and Motown party music to stages and dance floors up and down the UK. With 2 high quality female vocalists, Claire and Emma, together with Andrew's rapping skills, Soul Hop will win you and all of your guests round from the first song.

“Pleasure to have them play at my wedding”

SOUL
(I'm A) Road Runner - Jr. Walker & the All Stars
(Love Is Like A) Heat Wave - Martha and The Vandellas
(Sittin’ on) The Dock Of The Bay – Otis Redding
ABC – The Jackson 5
Actions Speak Louder Than Words - Mable John
Ain't No Mountain High Enough - Marvin Gaye & Tammi Terrell
Ain't No Stopping Us Now - McFadden and Whitehead
Ain't No Sunshine - Bill Withers
Ain't Nobody - Chaka Khan
Ain’t Too Proud To Beg - The Temptations
All Night Long - Lionel Ritchie
All of Me – John Legend
Always Be My Baby - Mariah Carey
At Last - Etta James
Baby I Need Your Loving - Four Tops
Baby Love – The Supremes
Beat It - Michael Jackson
Beggin - Madcon
Bernadette - Four Tops
Billie Jean - Michael Jackson
Blame It On The Boogie - The Jackson 5
Build Me Up Buttercup – The Foundations
Car Wash - Rose Royce
Celebration - Kool and The Gang
Chains of Fool – Aretha Franklin
Chasing Pavements - Adele
Cloud Nine - The Temptations
Come to Me - Marv Johnson
Cosmic Girl - Jamiroquai
Crazy - Gnarls Barkley
Dancing In The Street - Martha and The Vandellas
Deja Vu - Beyonce ft Jay-Z
Didn’t You Know You’d Have To Cry Sometime - Gladys Knight & The Pips
Do I Do – Stevie Wonder
Do I Love You - Frank Wilson
Do You Love Me - The Contours
Don’t Leave Me this Way - Thelma Houston
Easy - Commodores
Every Little Bit Hurts - Brenda Holloway
Feeling Good - Nina Simone
Finally – Cece Peniston
Fingertips - Little Stevie Wonder
For Once In My Life – Stevie Wonder
Forget You - Cee Lo Green
Friendship Train - Gladys Knight & The Pips
Get Ready - The Temptations
Getaway - Earth Wind and Fire
Give It Up - KC and The Sunshine Band
Gonna Give Her All the Love I've Got - Marvin Gaye
Good Times - Chic
Got To Be Real - Cheryl Lynn
Happy Birthday - Stevie Wonder
He Was Really Sayin’ Somethin’ - The Velvelettes
Heaven Must Have Sent You - The Elgins
Hit The Road Jack - Ray Charles
Hitch Hike - Marvin Gaye
How Sweet It Is To Be Loved By You – Marvin Gaye
I Can't Help Myself (Sugar Pie, Honey Bunch) - Four Tops
I Can’t Get Next To You - The Temptations
I Feel Good - James Brown
I Heard It Through The Grapevine - Marvin Gaye
I Just Called To Say I Love You – Stevie Wonder
I Say A Little Prayer – Aretha Franklin
I Wanna Dance With Somebody – Whitney Houston
I Want You - Marvin Gaye
I Want You Back - Jackson 5
I Was Made to Love Her - Stevie Wonder
I Will Survive - Gloria Gaynor
I Wish – Stevie Wonder
I Wish It Would Rain - The Temptations
I'm Coming Out - Diana Ross
I’m Every Woman – Chaka Khan
I’m So Tired Of Being Alone – Al Green
If I Ain't Got You - Alicia Keys
Inner City Blues (Make Me Wanna Holler) - Marvin Gaye
Isn’t She Lovely – Stevie Wonder
It Takes Two - Marvin Gaye & Kim Weston
It’s A Shame - The Spinners
Jimmy Mack – Martha Reeves & The Vandellas
Just My Imagination (Running Away With Me) - The Temptations
Just The Two Of Us - Bill Withers
Keep On Truckin’ - Eddie Kendricks
Killing Me Softly – Roberta Flack
Lady Marmalade - Patti Labelle
Lean On Me - Bill Withers
Leaving Here - Eddie Holland
Let's Get It On - Marvin Gaye
Living For The City - Stevie Wonder
Long Train Runnin - The Doobie Brothers
Lost In Music - Sister Sledge
Love Hangover - Diana Ross
Lovely Day - Bill Withers
Money (That’s What I Want) - Barrett Strong
Moondance - Van Morrison
Mustang Sally - Mack Rice
My Girl - The Temptations
My Guy - Mary Wells
Natural Woman - Aretha Franklin
Needle In A Haystack - The Velvelettes
Never Too Much - Luther Vandross
Nowhere to Run - Martha and The Vandellas
Number One In Your Heart - The Monitors
Ooh Baby Baby - The Miracles
Papa Was A Rolling Stone - The Temptations
Please Mr Postman – The Marvelettes
Proud Mary - Tina Turner
Proud Mary – Tina Turner
Put A Little Love In Your Heart – David Ruffin
Rather Go Blind - Etta James
Reach Out I'll Be There - Four Tops
Rescue Me – Fontella Bass
Respect – Aretha Franklin
Rock With You – Michael Jackson
Rocksteady - Aretha Franklin
Rolling In The Deep - Adele
Shackles (Praise You) - Mary Mary
Shop Around - The Miracles
Shotgun - Jr. Walker & the All Stars
Signed, Sealed, Delivered, I'm Yours - Stevie Wonder
Sir Duke - Stevie Wonder
Sitting on the Dock of the Bay – Otis Reading
Something's Got A Hold On Me – Etta James
Son Of A Preacher Man - Dusty Springfield
Soul Man - Sam and Dave
Stand By Me - Ben E King
Standing In The Shadows Of Love - Four Tops
Stop! In The Name Of Love - The Supremes
Street Life – The Crusaders
Summertime - Sam Cooke
Superstition - Stevie Wonder
Take a Look Around - The Temptations
Take Me To The River - Al Green
The Hunter Gets Captured By The Game - The Marvelettes
The Night - The Four Seasons
The Tears of A Clown - Smokey Robinson and The Miracles
The Tracks Of My Tears - The Miracles
The Way You Do The Things You Do – The Temptations
There’s A Ghost In My House - R. Dean Taylor
Think - Aretha Franklin
This Old Heart Of Mine (Is Weak For You) - The Isley Brothers
Tired of Being Alone - Al Green
Too High - Stevie Wonder
Too Many Fish in the Sea - The Marvelettes
Trouble Man - Marvin Gaye
Twenty-Five Miles - Edwin Starr
Upside Down - Diana Ross
Uptight (Everything’s Alright) – Stevie Wonder
Walk Away From Love - David Ruffin
War - Edwin Starr
We Are Family - Sister Sledge
What A Wonderful World – Louis Armstrong
What Becomes Of The Brokenhearted - Jimmy Ruffin
What's Going On - Marvin Gaye
Where Did Our Love Go - The Supremes
Who's the Fool - Singin' Sammy Ward
You Are The Sunshine Of My Life - Stevie Wonder
You Can’t Hurry Love - The Supremes
You Keep Me Hanging On - The Supremes
You Really Got A Hold On Me - The Miracles
You're All I Need To Get By - Marvin Gaye & Tammi Terrell
You’re A Wonderful One - Marvin Gaye
Young Hearts Run Free - Candi Staton

Pleasure to have them play at my wedding

“We had Soul Hop perform at our wedding in London three weeks ago or so. They were brilliant and had everyone up and dancing. I highly recommend them. Also they performed a great repertoire of Jewish songs for Jewish dancing. ”

Most Alive Network artists travel UK wide and internationally. Get a guide price instantly by clicking the 'get quote' button and entering your event date and location. Make an enquiry and we will liase directly with Soul Hop to confirm price, availability, and the provide you with a confirmed quote.

Soul Hop is a group of extremely talented musicians bringing the best hiphop, RnB, pop, soul and Motown party music to stages and dance floors up and down the UK. With 2 high quality female vocalists, Claire and Emma, together with Andrew's rapping skills, Soul Hop will win you and all of your guests round from the first song.

Andrew has opened for acts like Skepta and Wiley, and is our much-loved Brit rapper, when he’s not rapping he’s on his keys jamming along with the band. Claire and Emma who frequently flex their vocal chords together with a choir group who have gone on tour with Peter Andre, Beverly Knight, The Feeling, Josh Groban, and Jamie Cullum.

Collectively the band have all studied at some of the most prestigious musical educational facilities in the UK, including Brit School, the British Institute of Modern Music, and the British Academy of New Music; have played with the likes of Emeli Sande, Ellie Goulding, Little Mix, Imelda May, David Stewart (Eurythmics), Lenny Henry and Mollie King (of The Saturdays); have supported Robbie Williams, Rudimental, and Ronan Keating; have performed at Isle of White Festival, Newquay Beach Break Festival, The Full Ponty, GuilFest, Evolution Festival, SXSW Festival, and Notting Hill Carnival; toured the UK, Europe, and USA; have played at the renowned 100 Club, O2 Arena, O2 Islington, Jazz Café, and Versuz (one of Europe’s largest nightclubs); and have played on Capital FM. I think you’ll agree that they've more than earned their stripes.

Claire and Emma lead the way in Soul Hop as they belt out the band's pop, funk and soul repertoire, from artists such as Beyonce, Aretha Franklin, and Bruno Mars. The band has a repertoire of over 700 songs covering the 1950s to the current top 40, and specializes in hiphop, RnB, soul, pop and Motown, though their repertoire also covers funk, rock, jazz, disco, gospel, swing, blues, Jewish as well as Christmas and Halloween genres!