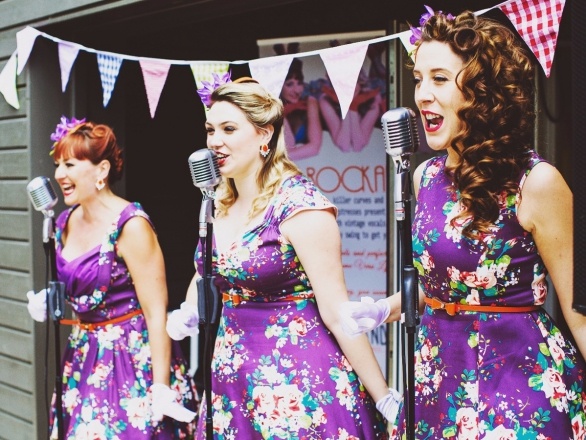 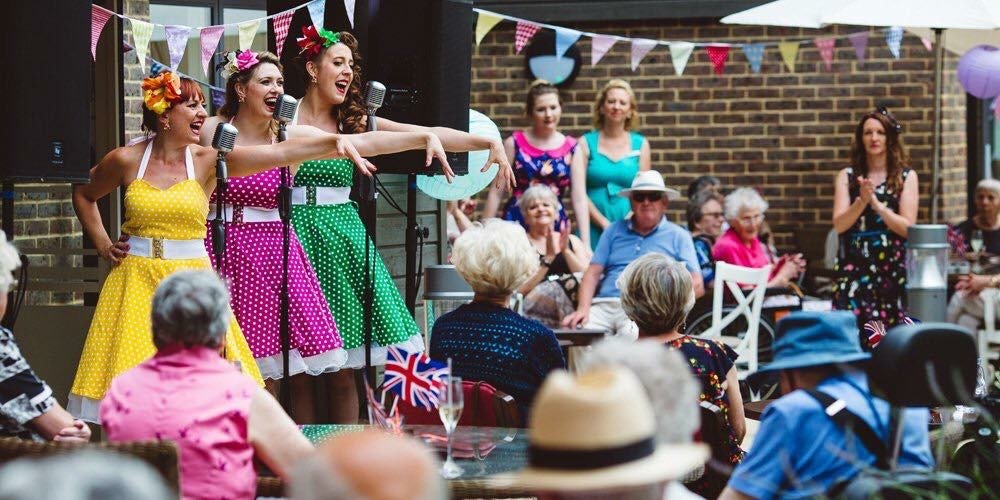 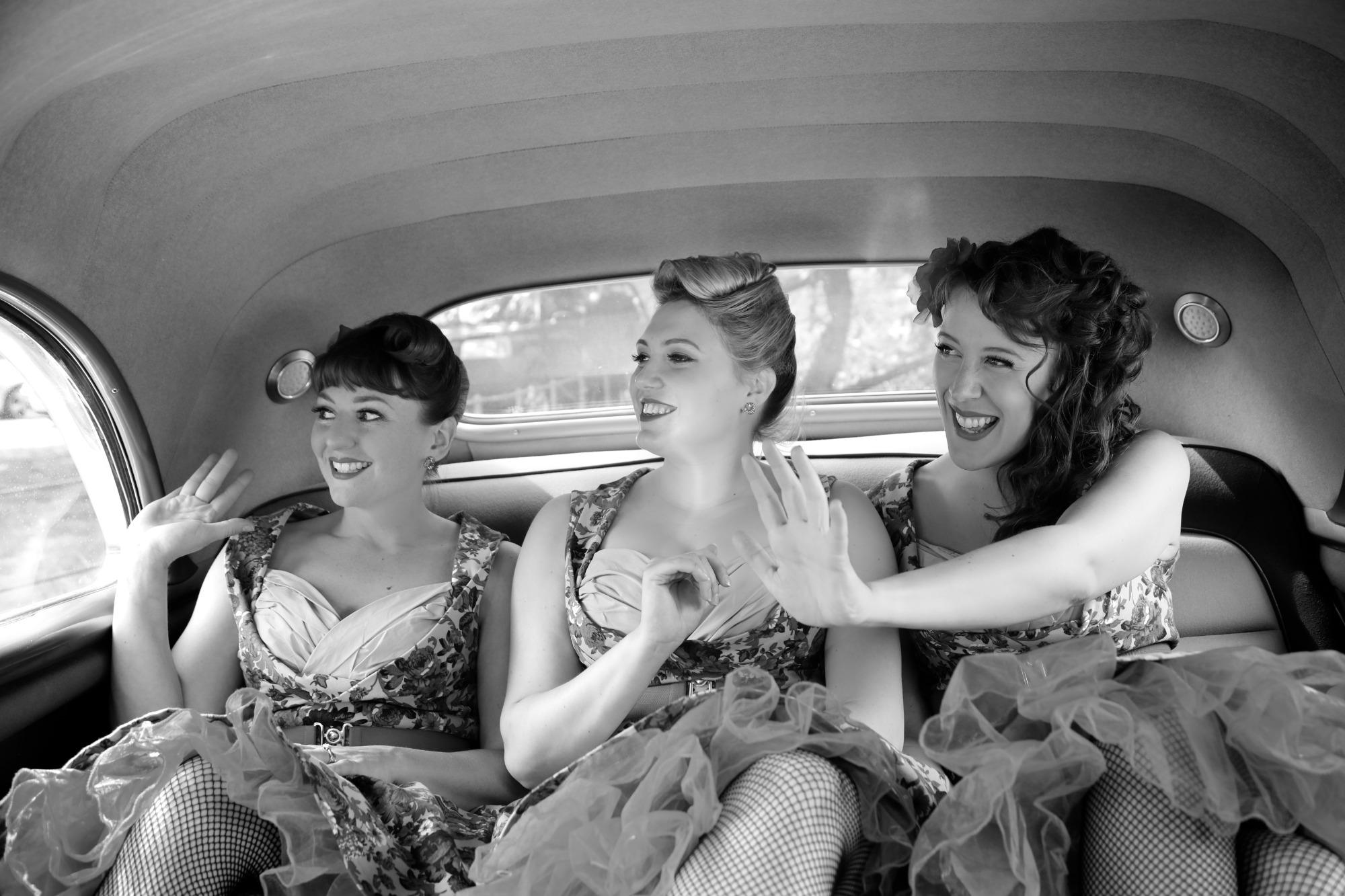 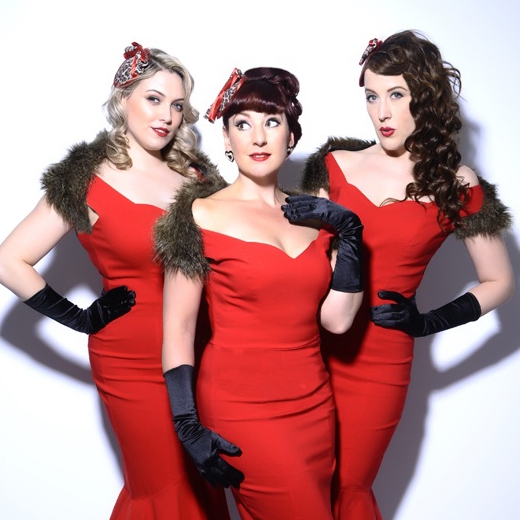 Today's answer to The Andrews Sisters, 3 piece Sirens of Swing perform toe-tapping classics from wartime songbirds to floor-fillers from modern day chart toppers. All mixed with a retro vibe, glamour and grace of the 1940's!

“Full of energy and our guests really enjoyed their perfomances”

42nd Street
A Tisket A Tasket
Alexander’s Ragtime Band
All that Jazz
As Time Goes By
Beat Me Daddy Eight to the Bar
Billie Jean
Boogie Woogie Bugle Boy
Cabaret
Candyman
Can’t Buy Me Love
Chattanooga Choo Choo
Cheek to Cheek
Come Fly with Me (solo)
Come on a My House (solo)
Crazy in Love
Creep
Diamonds are a Girl’s Best Friend (Moulin Rouge version)
Don’t Sit Under the Apple Tree
Dream a Little Dream of Me
Drive My Car
Fly Me to the Moon
Gershwin Medley (Someone to Watch Over Me / Slap That Bass / Fascinating Rhythm)
Get Happy
Goodnight Sweetheart (a capella only)
I Bet You Look Good on the Dancefloor
I Don’t Feel Like Dancing
I Got Rhythm
In the Mood
It Don’t Mean A Thing If It Aint Got That Swing
I Wanna Be Like You
I Will Survive
Just the Way You Are
Keep the Home Fires Burning
Kiss Me (a capella)
Lady is a Tramp
Lay Down Your Arms
Like A Virgin
Little Girl from Little Rock (duet)
L.O.V.E.
Lullaby of Broadway
Minnie the Moocher
Moonlight Serenade
Mr Sandman
Nightingale Sang In Berkeley Square
Oh Johnny Oh!
Orange Coloured Sky v Paper Moon (medley)
Putting On The Ritz
Salute
Sing Sing Sing
Sisters (duet)
Shout
Stuff Like That There (solo)
That Man
That Old Black Magic (solo)
The Beer Barrel Polka
The Locomotion
Toot Toot Tootsie Goodbye
Umbrella
Valerie
Wartime Medley (Lambeth Walk / Tipperary / Underneath the Arches)
We’ll Meet Again
White Cliffs of Dover
Wiggle
Wonderwall
Yes Sir! That’s My Baby
Zoot Suit Riot

Full of energy and our guests really enjoyed their perfomances

“Excellent Perfomance from S.O.S. Full of energy and our guests really enjoyed their perfomances.  ”

“Well...what can we say, WE DID IT! We wanted to drop you a line to tell you what a superb job you did. I hope you meant it when you said it was the best one you had done!!! People have been talking about your set, it was a huge hit and everyone is asking where I found you so I hope it brings you more work and even myself a chance to see you wonderful girls again. Thanks for allowing me to sing with you which is something I will carry with me, it's also led to lots of people saying they had no idea I could do that!!!! Yay! We have some fabulous photos with you in so let me know if you want any. Hope you managed to eat!!! 'Marry' Christmas girls. Simon & Craig xxx”

Alive, were very professional throughout and extremely helpful and had a good wo...

“Alive, were very professional throughout and extremely helpful and had a good working knowledge of dealing with the Military and the implications that comes with that. The S.O.S. were a last minute replacement and were perfect for the night, originally out of our price range but as our act was cancelled and their venue was due to the weather a compromise was swiftly sorted by Alive. My orginal act cancelled lunchtime the day before due to the snow, (totally understandable) Alive had me S.O.S. rebooked by 1730hrs that day. Will be using again! Clare thanks a million for the doing all the hard work and making our Christmas party! ”

I just wanted to write and tell you how fabulous you looked and sounded last wee...

“I just wanted to write and tell you how fabulous you looked and sounded last week. It was a joy to see you and at such an exclusive venue, what a treat! I am looking forward to seeing you in action soon. Best wishes, John Cullins”

Thanks so much for the fantastic music you provided for our wedding. Everyone ha...

“Thanks so much for the fantastic music you provided for our wedding. Everyone has been talking about the beautiful Sirens of Swing nearly as much as the beautiful bride! If you are still singing together, we look forward to booking you for our golden wedding anniversary! Thank you so much, James and Rebecca Simpson”

Most Alive Network artists travel UK wide and internationally. Get a guide price instantly by clicking the 'get quote' button and entering your event date and location. Make an enquiry and we will liase directly with S.O.S (Sirens of Swing) to confirm price, availability, and the provide you with a confirmed quote.

Highlights
* Amazingly retro stunning to look at and delightful to listen to!
* Full costumes 3 part female vocal harmonies and dance routines
* Songs from Andrews Sisters to The Beatles to Beyonce!
* Previous clients include Barclays JD Sports public events and private parties
* Self contained with PA system as standard
* Available UK wide and internationally

With killer heels, killer curves and killer harmonies, this velvety vocal trio have been called to the musical front line to lift the spirits of ladies and gentlemen all over the world.

Combining stunning close harmony vocals with bespoke big band arrangements, cute choreography and top to toe pin up couture, these sassy songstresses serve up a perfectly nostalgic mix of toe-tapping tunes from swing-time songbirds and red hot rockabilly groups, right through to modern day pop which they beat into submission with their retro sticks!

Founded in 2009 by singer and actress Sarah, Sirens of Swing quickly became a firm favourite with high-end corporate and commercial brands including Bentley, Mercedes-Benz, Tiffanys, Twitter, British Airways, Neff, Cath Kidston and Nespresso, performing at a host of renowned banqueting suites and top hotels including The Savoy, The Ritz, The Grosvenor, The Hilton and The Dorchester to name but a few. With regular shows at famous retro joints The Pigalle (now Electric Cafe), Troxy and Café De Paris, The Rockabellas are also highly regarded on the vintage cabaret circuit and were awarded at The National Vintage Awards in the Best Vintage Style Musical Performer Category in 2012. They are regular features, both on stage and in the press, at major sporting events such as Epsom Ladies Day, Royal Ascot and The Grand National and have performed at Wembley for the 2012 FA Cup Final and Allianz Park for The Saracens Season Open Launch 2013.

Sirens of Swing were the first repeated act in the 20 year history of the ‘Battle Proms’ picnic proms concerts, where for five consecutive years they performed to thousands of people a week at stunning stately home locations such as Blenheim Palace and Highclere Castle, home of Downton Abbey. To date, their largest audience was at the official Queen’s Diamond Jubilee Family Festival in Hyde Park where they thrilled over 100,000 people with their bespoke Jubilee dresses and Union Jack pill box hats, closely followed by their thrilling performance to 7,000 singers at Birmingham’s NEC for the 10th anniversary of national phenomenon Rock Choir.

With a jingle campaign for mobile phone giant Orange, Television features alongside Frank Skinner and Suzi Klein (‘What Performance’ BBC4) and for Tim Minchin, Dawn French, Ruth Jones and Michael Sheen (‘Ruth Jones Easter Treat’ BBC4), theatre billings throughout the UK with their sell-out show Sirens of Swing, foreign engagements in Europe, Asia and America, The Rockabellas have certainly been there, done that and worn the pencil skirt!!!

100% of people that booked S.O.S (Sirens of Swing) would recommend Alive Network to their friends

After booking, speak directly with S.O.S (Sirens of Swing).