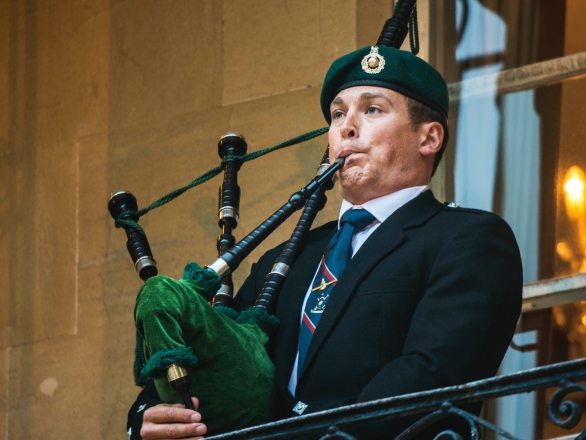 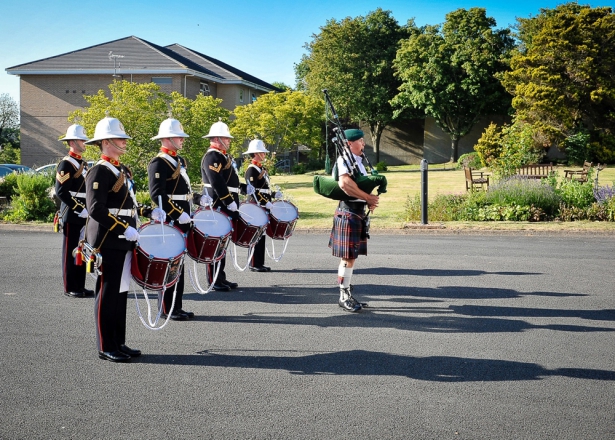 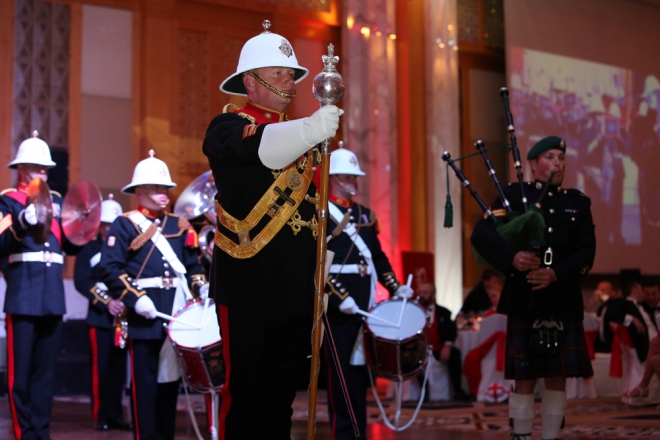 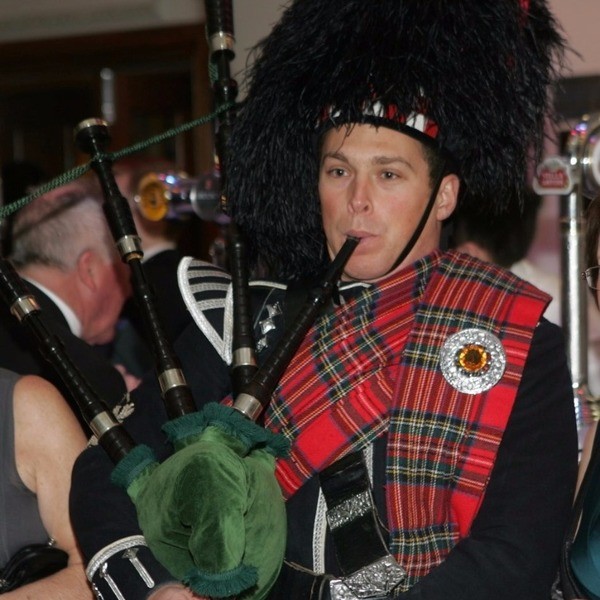 Having played all over the world in his piping and military career, The Royal Marines Piper is available for all occasions such as Burn's Night, Weddings, Funerals, Military events or corporate events.

“Everyone has a basic expectation of a Piper on Burns Night. The Royal Marines Piper was astounding. First impression was his impeccable turn out in the uniform. The piping was phenomenal. He played for 10 minutes before dinner to an audience of varying ranks some extremely Senior. This was done with confidence and of a superb ability. He then piped the Top Table in, which was an honour to walk behind him whilst listening to him play. The set during the mains had people stop eating as he engulfed the room with his playing. I would highly recommend for any event. Superb, many thanks. Charlie Gilbert”

Made my wedding day even more special

“Being piped up the aisle absolutely made my day!! All of our guests comented on how amazing our piper was and how it brought that wee bit of Scotland to the day. The service we recieved from start to finish was great, very professional, would recommend to others.”

OMG just amazing and went beyond our expectations

“The whole event went perfectly and the Piper was brilliant. Everyone enjoyed his playing and hope that he enjoyed his day too. Would recommend Robert to anyone wanting a piper at their event. He played music that was requested and just brilliant.”

Fantastic touch to our wedding

“Robert did a brilliant job at our wedding and the guests loved it. So professional and it all worked so well! Having Robert play us into our marquee to the top table worked fantastic!! Thank you to Alive Network and Robert you did a great job !!”

“Robert is a first class piper. He played all the tunes we requested and more. His turn out was immaculate and he brought much dignity to the proceedings. We will certainly ask for him again when we have another appropriate event.”

Price from £269 + travel from Gloucestershire

Based on 1 person performing up to 3 hours

Most Alive Network artists travel UK wide and internationally. Get a guide price instantly by clicking the 'get quote' button and entering your event date and location. Make an enquiry and we will liase directly with Royal Marines Piper to confirm price, availability, and the provide you with a confirmed quote.

The Royal Marines Piper is a Highland Bagpiper with many years of professional experience. As well as holding the position of Royal Marines Band Piper, Robert is also a member of the St Andrews Pipe Band of Cheltenham.

Having played all over the world in his piping and military career, his current engagement list holds events such as The Menin Gate Armistice performance in Ypres, Belgium, St George's Day Society sponsored events in Dubai (piping in all the major venues in the U.A.E for the RM Band and as a soloist) and piping in several warships into home and foreign ports, specifically HMS Ocean, Albion and Cumberland.

Robert is available for all occasions such as Burn's Night, Weddings, Funerals, Birthdays and Corporate Events. He is an extremely capable piper with a choice of three dress uniforms available with the service: Full piping Number 1s, Day Dress and Bespoke RM Military Dress.