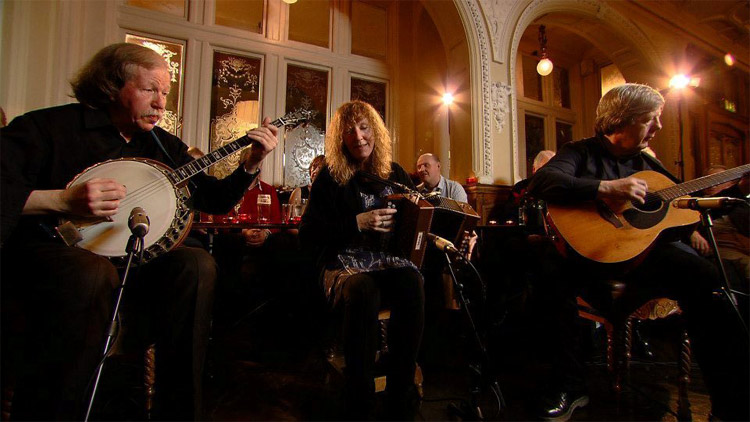 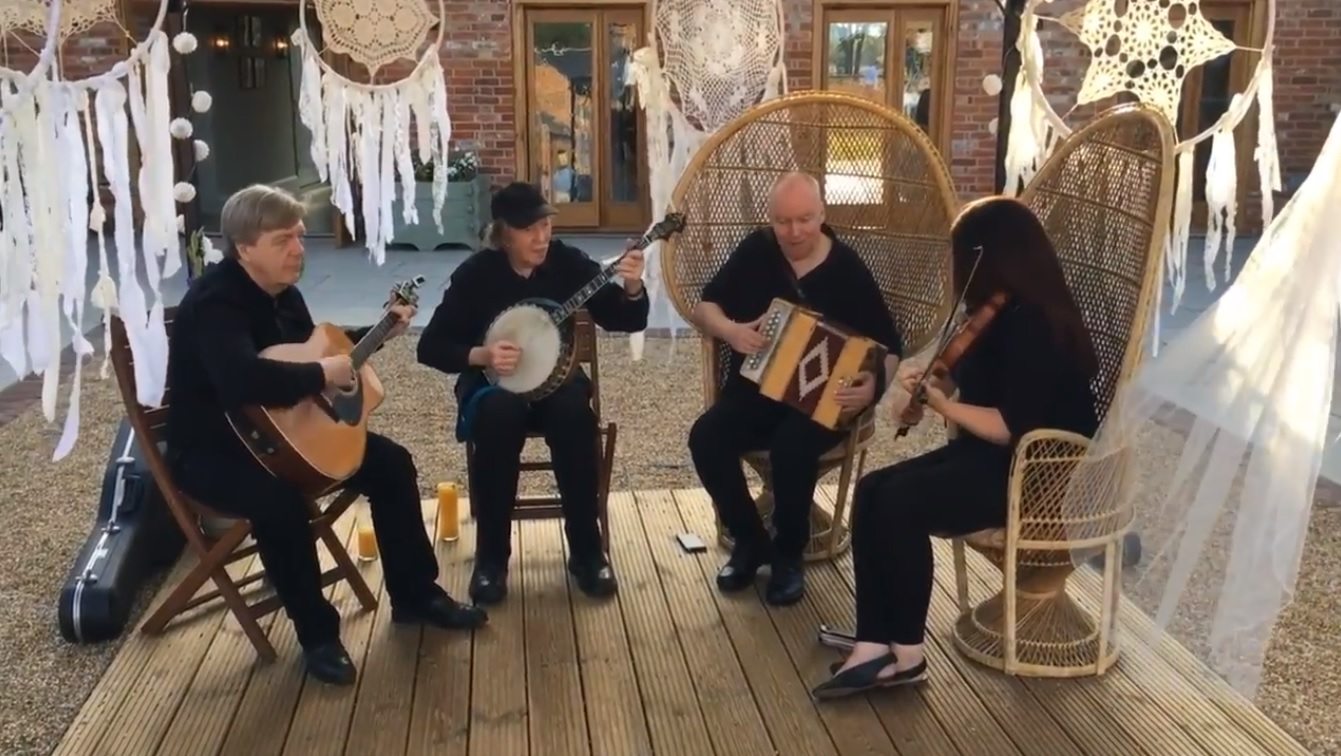 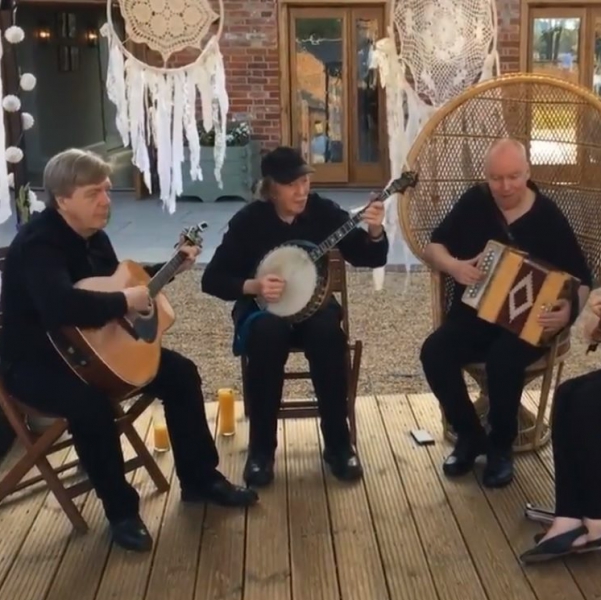 “The evening was perfect and just what we imagined!”

We have a very wide repertoire these are just some of the songs tunes and dances we know.

Scottish:
500 Miles
Amazing Grace
Auld Lang Syne
Black is the colour
Bonny Ship the Diamond
Both Sides the Tweed
Caledonia
Charlie Is My Darling
Dark Island
Donald Where's your Trousers
Fleur of Scotland
For these are my Mountains
Loch Lomond
Marie's Wedding
My Love Is Like A Red Red Rose
Peggy Gordon
Rose of Allendale
She Moved through the Fair
Whistling Gypsy Rover
Will you go Lassie Go
Willie McBride
Winter it is Past
Wraggle Taggle Gypsies

Rock / Pop:
500 miles
All My Loving
Amorillo
Annie's Song
Brown Eyed Girl
Can't buy me love
Country Roads
Dance the Night Away
From Me To You
Hallelujah
Hey Good Lookin
I just called to say I love you
I'll never find another you
I'm into something good
I wanna hold your hand
Love is the sweetest thing
Return to Sender
Rivers of Babylon
Summer Holiday
Twist & Shout / La Bamba
World of Our Own
Yesterday

Dances: The selection of dances at your function depends on your caller using their experience, working with the audience and going with what works best. These are just some of the dances we have presented over the years:
Barn Dance
Big Set
Bridge of Athlone
Circassian Circle
Circle dance
Circle Waltz
Cumberland reel
Cumberland Square Eights
Danish Waltz
Dashing White Sergeant
Gay Gordons
Harvesting Jig
Haymakers jig
Hokey Cokey
I Want to be near you
Longways dances
Sausage roll
Seige of Ennis
Square dance
Strip the Willow
Virginia Reel
Walls of Limerick
Waves of Tory

And many, many more Scotish, Irish and Barn Dance selections!....

The evening was perfect and just what we imagined!

“Just to say a big thank you for Gail's 50th party at the Oak Room on the 29th Feb. Everyone had a fantastic time and I wouldn't be surprised if you get some new enquiries. We think the evening was perfect and just what we imagined!”

Reels On Wheels provided a fun, lively and engaging evening.

“Reels On Wheels provided a fun, lively and engaging evening. We had a mix of experienced ceilidh dancers and complete beginners - the band made it a fantastic evening for everyone!”

The caller was excellent with our wide range of ages!

“The band were really good and the caller was excellent with our wide range of ages - she included everyone and helped the children to be able to do the dances!”

Reels On Wheels were great and very professional!

“Reels On Wheels were great and very professional! We would definitely recommend them.”

Everyone had great fun and thoroughly enjoyed the experience of a ceilidh.

“Turned up when they said they would and were very accommodating. Margaret was great at encouraging the reticent and showing how to do the dances. Everyone had great fun and thoroughly enjoyed the experience of a ceilidh. Would definitely recommend Reels On Wheels to others.”

Most Alive Network artists travel UK wide and internationally. Get a guide price instantly by clicking the 'get quote' button and entering your event date and location. Make an enquiry and we will liase directly with Reels On Wheels to confirm price, availability, and the provide you with a confirmed quote.

floodlights for the band

Formed in 1998 Reels On Wheels includes some of the finest traditional musicians in the South East UK including award-winning performers. All the musicians have been performing touring and recording for many years.

Reels On Wheels are flexible enough as regards personnel, instrumentation and musical style to be able to tailor a band to each client's specific requirements, and go out as anything from a trio (as standard) to a six-piece, amplified or acoustic, with or without a caller.

Their most common format for a ceilidh consists of three musicians plus a caller who will teach the dances from scratch - no experience needed!

A Ceilidh is ideal for a successful party, as it is a fun way to get families, friends and colleagues to mix and meet and because all age groups become involved.

Reels On Wheels play traditional Irish, Scottish, English and American songs and tunes with innovation, flair and vitality. The band are both sensitive to the occasion and responsive to the mood of the audience. If you wish, they can concentrate on one particular style throughout the performance e.g. Scottish or Irish.

Meet The Band
Eugene - Accordion - was steeped in traditional Irish music ever since he started playing tin whistle at the age of seven. Born in Luton, Bedfordshire, to Cavan and Monaghan parents, his father Jim Teevan was president of Comhaltas Ceoltoiri Eireann 2004 - 2009. Eugene joined the Leagrave Branch of Comhaltas and soon graduated to concert flute and accordion. He competed in Fleadhs all over Britain and Ireland and was All-Ireland Champion in 1982 and 1986 and is now a qualified music teacher with Comhaltas. Eugene adjudicated at the North London Junior Fleadh on 24th November 2013 helping to encourage young traditional musicians. Over the years Eugene has been a regular performer at Irish music festivals, conventions and sessions as well as playing with several folk and ceili bands. Eugene has also performed in America and Canada. Since 2011 Eugene played with Colgarra with singer/songwriter Joe Giltrap. Eugene started playing with Reels On Wheels in October 2013

Carlene - Fiddle - Experienced Performer & Nurturing Tutor: BA (Hons) Psychology. BBC2 Young Traditional Musician of the Year (1994 -5)?. All-Ireland Fiddle Champion (1992).  Havering Young Musican of the Year (1991) Carlene learnt both Classical and Irish Traditional Music from age 6 and went on to win Traditional Irish music 'Fleadh Ceol' competitions. She gained classical grades up to grade 8, studied violin at Guildhall School of Music and became professional at age 17. Since then Carlene has crossed many genres, played on many albums as a session musician and toured extensively. She plays Irish, folk, classical and Jazz music, and is a exceptionally talented lead soloist and improvisor on violin. The tradition was passed down to Carlene from her mother, Goretti Anglim who plays Irish Traditional flute with Wraggle Taggle and from Goretti’s father who played fiddle and back through the generations of musicians. Carlene also teaches fiddle / violin using Suzuki Method, and the ABRSM classical curriculum as well as Jazz, and Traditional Music from Brittany, Scotland, Hungary, Italy and Eastern Europe.

Mary - Caller - is a rare combination of expert country dance caller and crowd psychologist. Her knowledge of dance steps from the UK and beyond is based on decades of professional involvement and a true passion for her art. Her outgoing and friendly personality puts everyone immediately at their ease. She caters for all ages and levels of experience, and is sensitive to the fitness levels of the dancers she is working with. Mary is an extremely personable performer with an encyclopedic knowledge of dance steps, which she is able to communicate simply yet effectively to all participants. Mary's fans say... Our guests loved you, and the dancing was great fun thanks to your excellent caller who was perfect I thought – teaching the steps without being to 'bossy' or making people feel singled out Kate
Thank you very much for your wonderful expert, encouraging and enticing calling. Everyone absolutely loved the band , the dancing and especially your calling. All of Chislehurst is talking about the day and telling all their friends what a wonderful time they had. You really helped to make the day a tremendous, happy success Donna
Just wanted to say thank you so much for playing at Rebecca's party on Friday. You were a huge success and everyone is raving about how much they enjoyed the ceilidh. Please thank all the band and of course the caller, who were all just perfect. I shall be letting everyone know just what a wonderful group of people you. With very best wishes Julie
Thanks for calling brilliantly on Saturday. I think they danced well thanks to you, and everyone seemed to appreciate the evening. And they fireworks finished things off nicely - eventually Stewart
Mary joined Reels On Wheels in 2012.

Mick - Guitar Vocals - is the founder and lynch-pin of the band which he put together following many succesful years organising sessions and gigs in and around his home in North London. He carefully selected the band members for outstanding talent on their individual instruments and as a bunch of good friends. Born in Yorkshire in 1954, Mick trained as a classical pianist and taught himself the guitar. He was always interested in folk music and helped run Knebworth Folk Club in Hertfordshire when he was just a teenager. He was turned on to Irish music during the seventies revival by groundbreaking bands such as Planxty The Bothy Band and The Chieftans. Mick has worked in a variety of musical areas composing and arranging for theatre as well as jazz rock and folk groups. Previous projects include The Tollpuddle Players Take Two Yellow Belland Northern Celts.

Mick - Tenor Banjo Mandolin - Mick inherited a love of Irish music from his parents who came from County Kerry & Roscommon in Ireland. The Dubliners banjo player Barry McKenna inspired Mick to learn the Banjo in 1967. He learned tunes from the great London Irish musicians including John Bowe Bobby Casey Tommy McCarthy and Roger Sherlock and is particularly influenced by Clare Galway and Kerry styles of playing. Mick won the all-Ireland tenor banjo championship in 1971 and two all-Ireland ceilidh band medals in 1986 and 1987 as a member of Thatch Ceilidh Band. He toured the USA & Ireland in 1975 and the UK in 1976 with Jo Burke and Paddy Glakin on a tour organised by the Irish Traditional Music Association Comhaltas Ceoltori Eirean. Mick has played in countless concerts and ceilidh's over the years, and toured in the U.S.A, Canada, South Africa, Switzerland, Germany, Italy, Ireland and elsewhere. He has recorded with some of the greats of Irish music including Tommy Makem, Kevin Burke, Brendon Shine, Donal Lunny and Noel Murphy. In 1992 Mick backed Elvis Costello on stage and he performed with Ronnie Drew of The Dubliners in 1998. Mick joined Reels On Wheels in 1997.

TV appearences Next on Live TV, Feilte on TG4.

- Reels On Wheels are happy to travel up to 150 miles from NW5 London. If your event is happening within a 150 mile radius but the band are not showing as available, please contact an Alive Network booking agent for a quote.

- All quotes include Reels On Wheels being 'on site' for up to 5 hours. Early arrivals or long breaks may incur extra charges.

- A suitably talented deputy will be substituted if any of the main band members aren't available.

After booking, speak directly with Reels On Wheels.