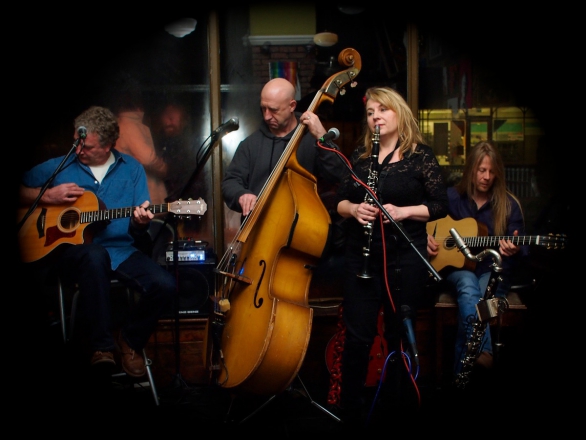 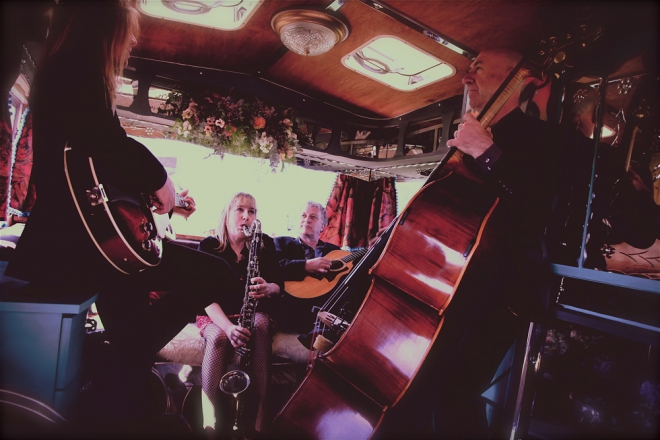 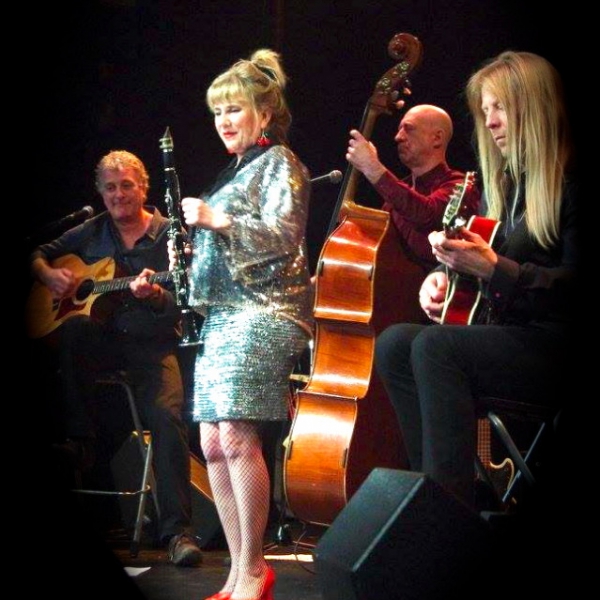 With virtuosic guitar licks, eloquent clarinet, bouncing bass lines and vocals in several languages; Paris Affair deliver a set that is heartfelt and full of irresistible joie de vivre. Sophisticated and accessible to all, this Gypsy Swing band will have you and your guests entranced all night long.

“Thank you Paris Affair for a wonderful afternoon.”

Thank you Paris Affair for a wonderful afternoon.

“Thank you Paris Affair for a wonderful afternoon. The feedback has been fantastic.”

Really enjoyed the Llanelli performance. You have a wonderful way of making the ...

“Really enjoyed the Llanelli performance. You have a wonderful way of making the audience feel like they are at a family get-together. It was great to see and hear the effortless communication between each of you and the fun you were clearly having as you entertained us royally. Diolch yn fawr iawn.”

“Played at my recent wedding at St Davids Hotel and Spa in Cardiff Bay. They were fantastic and everyone commented how brilliant and professionally they performed. If you have a wedding coming up and need a band this is the band!”

Hi Guys, me and Alex would like to thank you for making our wedding the most spe...

“Hi Guys, me and Alex would like to thank you for making our wedding the most special day of our lives, you were perfect and people have not stopped talking about you since. You playing Moondance for our first dance was magical, we can't thank you enough!”

Price from £833 + travel from Vale of Glamorgan

Most Alive Network artists travel UK wide and internationally. Get a guide price instantly by clicking the 'get quote' button and entering your event date and location. Make an enquiry and we will liase directly with Paris Affair to confirm price, availability, and the provide you with a confirmed quote.

With their line up of two guitars and double bass, uniquely fronted by clarinet, bass-clarinet and vocals; this extremely popular Swansea band has been bringing audiences across Wales and the rest of the UK to their feet.

Playing feel-good, accessible, Gypsy Swing Jazz and Latin music, Paris Affair base their style on the Hot Club of France. Strongly influenced by great artists such as Django Reinhardt and Benny Goodman; Paris Affair draw upon a myriad of other influences to create a set list which includes plenty of virtuosic guitar licks, eloquent clarinet, bouncing bass lines and vocals in several languages.

Between them, Paris Affair clock up years of professional experience at a high level in many different fields: from rock and folk, to pop and classical. Individually, they have worked with artists such as Terry Hall, Cerys Matthews, Shakin’ Stevens, Simon Rattle and Max Boyce, and have made numerous recordings, live television appearances and radio broadcasts in a plethora of venues and circumstances all over the world. Together they've performed extensively at festivals, functions, exhibitions, parties, restaurants, schools (giving classes as well as performances), pubs and jazz clubs, town halls, temples and tents!

Delivered with a heartfelt and irresistible joie de vivre, Paris Affair create a unique, sophisticated and widely appealing sound which will entrance you and your guests.