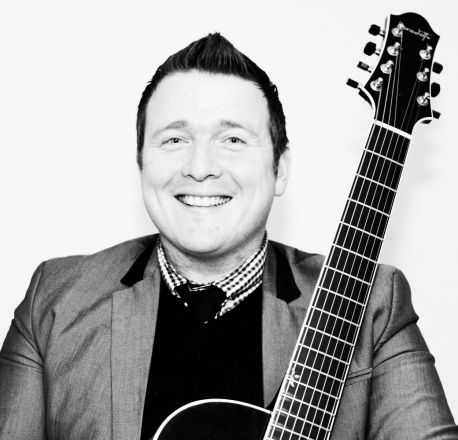 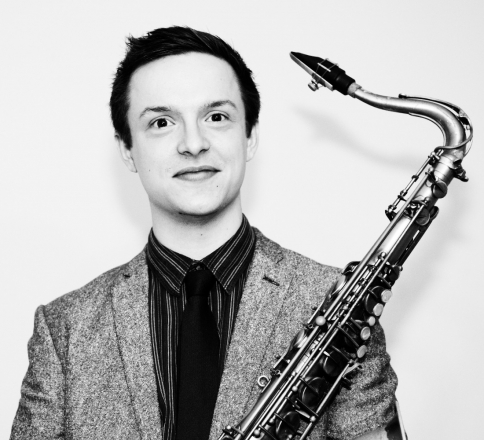 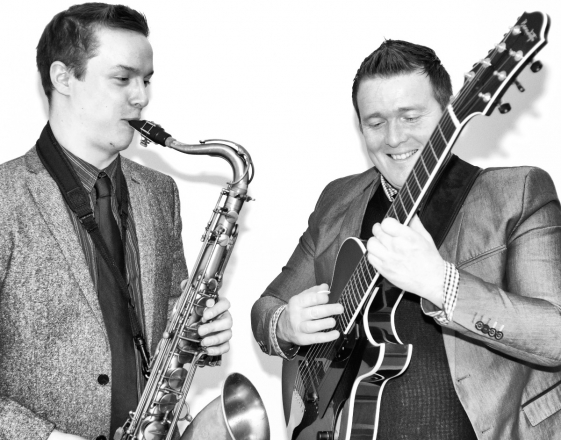 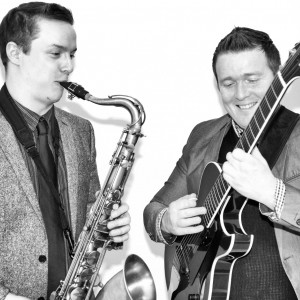 One O'Clock Jump are a superb jazz duo who recreate the classic jazz sounds of a bygone era, playing music by jazz greats such as Stan Getz, Benny Goodman, Charlie Parker and Miles Davis and many more. Ben's soulful and swinging saxophone, and Sam's virtuosic 7 string guitar playing lend the perfect accompaniment to a wedding reception, corporate function or private party.

“It made a big difference having live music”

Ain’t Misbehavin’
All Blues
All Of Me
All The Things You Are
Autumn In New York
Autumn Leaves
Blue Moon
Body And Soul
Bye Bye Blackbird
Cherokee
Days Of Wine And Roses
Desafinado
Do Nothin’ Till You Hear From Me
Embraceable You
Flamingo
Fly Me To The Moon
Foggy Day
Georgia On My Mind
Girl From Ipanema
Green Dolphin Street
Have You Met Miss Jones?
Here’s That Rainy Day
Honeysuckle Rose
How High The Moon
I Got Rhythm
I Can’t Get Started
I Cover The Waterfront
I Didn’t Know What Time It Was
I Got It Bad And That Ain’t Good
I’m Beginning To See The Light
I Want To Talk About You
In A Sentimental Mood
I’m Beginning To See The Light
I’m Getting Sentimental Over You
Just Friends
Lady Be Good
Lady Is A Tramp
Laura
Love For Sale
Lover Come Back to Me
Loverman
Lullaby Of Birdland
Mack The Knife
Mean To Me
Meditation
Misty
Moonlight In Vermont
My Favourite Things
My Funny Valentine
Night And Day
On The Sunny Side Of The Street
On A Slow Boat To China
One Note Samba
Out Of Nowhere
Over The Rainbow
Pennies From Heaven
Satin Doll
Shadow Of Your Smile
Skylark
Softly as In A Morning Sunrise
Someone To Watch Over Me
Star Eyes
Stardust
Stella By Starlight
Stomping At The Savoy
Stormy Weather
Summertime
Sunny
Sweet Georgia Brown
Tangerine
Tea for Two
Tenderly
There Will Never Be Another You
These Foolish Things
Wave
Way You Look Tonight
What Is This Thing Called Love?
When The Saints Go Marching In
When Sunny Gets Blue
Willow Weep For Me
You Are My Sunshine

It made a big difference having live music

“The One O'clock Jump band did a great job playing jazz at my wedding reception. It made a big difference having live music. Our guests really enjoyed it. Sam, Nadim and Kate, the musicians, were friendly, patient and easy to communicate with in advance of the event. I would readily recommend.”

What a wicked arrangement!

“What a wicked arrangement!”

Price from £449 + travel from West Yorkshire

Most Alive Network artists travel UK wide and internationally. Get a guide price instantly by clicking the 'get quote' button and entering your event date and location. Make an enquiry and we will liase directly with One OClock Jump to confirm price, availability, and the provide you with a confirmed quote.

Require minimal amplification, Sam has his own small and unobtrusive AER amp, which can also take a microphone for larger gigs where Ben may need a little more volume.

One O'Clock Jump is a swinging Saxophone & Guitar Jazz duo based in London.

Recreating the smooth and soulful sounds of the likes of Stan Getz, Charlie Parker, Dexter Gordon and many more, their classic sound is perfect for any wedding reception, corporate function or private event.

Saxophonist Ben is an in-demand tenor saxophonist, clarinetist and flautist, who started playing the saxophone at the age of 10 and studied in various ensembles through his school years before graduating with honors from the Leeds College of Music. Highlights include: performing with the Devon Youth Jazz Orchestra (DYJO), Dave Hankin Big Band, The Exeter College Dreamband and working with artists including Sam Dunn, Kate Peters, Garry Jackson, John Marley, Kevin Holborough, Graham Hearne & Al Wood.

Sam is a versatile professional guitarist with over 20 years' performing experience, in a career that has seen him play all over the world in many different settings. As a jazz musician Sam has toured Australia with Grammy nominated jazz pianist Judy Carmichael, and has performed at festivals across Europe, most recently at the Legnano Festival in Milan. Other performances include: Ronnie Scotts's, The Vortex Jazz Club and The Dean Street Pizza Express Jazz Club in London, Cafe Jazz in Cardiff, the Wardrobe in Leeds, the Jazzkeller in Frankfurt, Sax 'n Art in Saigon, Ned Kelly's in Hong Kong, and many more.

Sam has played in jazz orchestras including NYJO (the National Youth Jazz Orchestra), Mike Garrick's Big Band, and the Guildhall Jazz Orchestra. He's worked extensively in the theatre and has toured Britain and Europe with shows including 'The Rat Pack - Live from Las Vegas,' 'The Kings of Swing,' 'The Glenn Miller Orchestra,' and 'The Bobby Darin Songbook.' Sam's guitar playing has been heard on BBC Radio 3's 'Jazz Line Up,' and BBC Radio 4's 'The Gift' and in theatres and concert halls including The Royal Albert Hall and the National Theatre in London, The Opera Houses of Frankfurt, Stuttgart, Nuremberg, Oslo, Graz, and Copenhagen, The Stables in Wavendon, The Cardiff Opera House, The Old Vic in Bristol and The Empire in Liverpool.

After booking, speak directly with One OClock Jump.