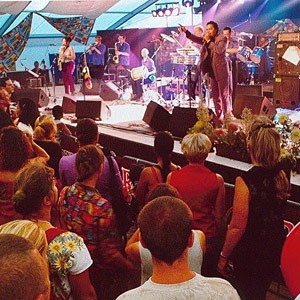 “The guys rocked the place and everyone was impressed with the quality and entertainment given.”

Menrengue Madness play a wide range of Salsa and Merengue music which is adjusted to suit the event and the client. Therefore, their performance is always be unique!

The guys rocked the place and everyone was impressed with the quality and entert...

“Just wanted to thank the band for a great time at my daughters Wedding in Beccles on Sunday night. The guys rocked the place and everyone was impressed with the quality and entertainment given.”

Most Alive Network artists travel UK wide and internationally. Get a guide price instantly by clicking the 'get quote' button and entering your event date and location. Make an enquiry and we will liase directly with Merengue Madness to confirm price, availability, and the provide you with a confirmed quote.

Usually have to hire in at additional fee.

Menrengue Madness is a 10 piece band, formed in early 1997, and based in London, England. Menrengue Madness's live stage show is the liveliest in Europe, modelled on the native bands from Santo Domingo, and with a front line of 2 crazy singers (Guillermo and Biembo) and hi-energy girl-sax player Nina, the non-stop show leaves them and their audiences breathless and ecstatic!

With an international line-up of 2 Dominicans, one Mexican, an Italian and 6 top British musicians, this band has created their own identity and repertoire, with some classic songs, and many of their own salsa and merengue compositions, which are featured on the new CD, and have already been used on television (Carlton TV & Channel 4).

This summer they performed at over 40 venues and festivals, including Italy (Torino and Verona) and Belgium (Polé Polé - headlining with Orquesta Clave y Guaguanco, and Orlando Poleo, and Bredene with Alfredo de la Fe).

They were also commissioned by BBC TV to write a salsa song specially for a Film "Babyfather" which was broadcast in 2001, and Menrengue Madness were up on the screen performing their music.

What the Press say:

"Probably the most danceable Latin band in the UK "- Vic Suarez, "The Salsamaniac" magazine

"The most requested song of 1999" JAZZ FM Radio

"They are notable both because of the sheer enthusiasm and vitality in their playing, and the variety in their songs" The Guardian

"They've recently been getting radio play with their latest EP which features a mean version of "No Woman No Cry" Time Out, London

"The band are super-slick meren/salsa dance machine. This is a killer" - Salsa World magazine

'If you can sit still while the contagious merengue rhythms blast past, you'd better consult your doctor because you must be nearly dead.....No woman No Cry is Hot, Hot, Hot salsa. Brilliant playing by all band members- Bob Marley would have approved'. "Dance 4 U" Magazine

"A masterpiece of totally radical banging sublimeity....-an instant hit throughout the world....it is a top notch groove and production. 'No Woman' works so well it makes you think maybe it was written as a salsa song first, and then Bob did his version!"
Dave Hucker, The Beat magazine