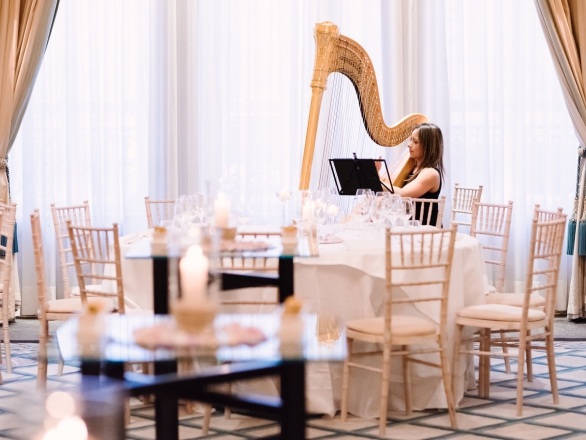 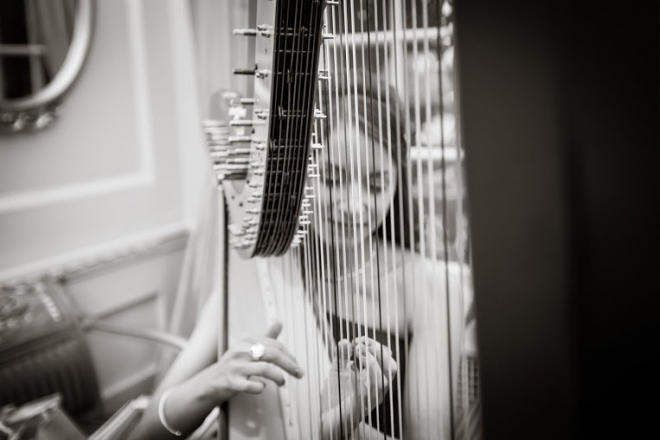 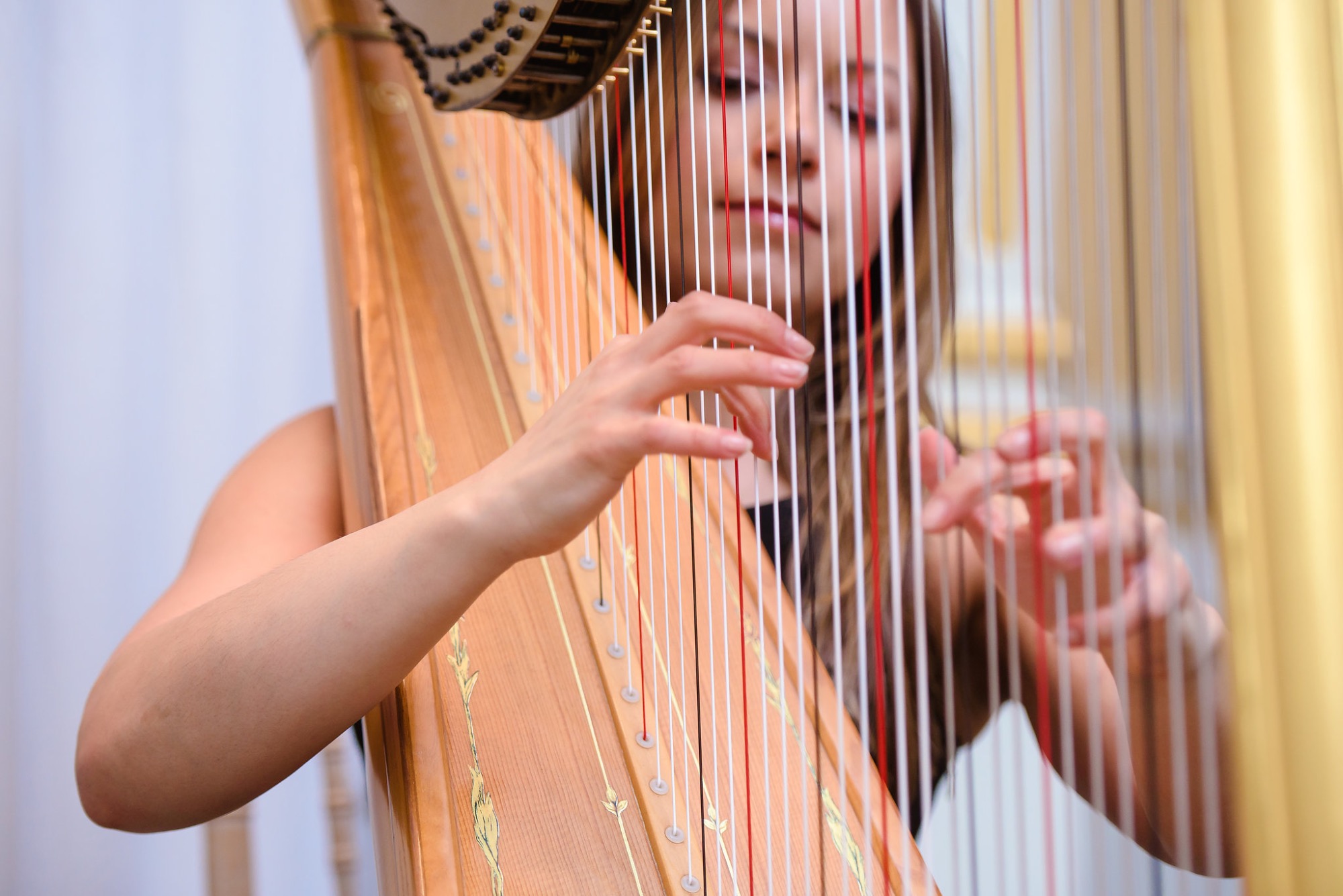 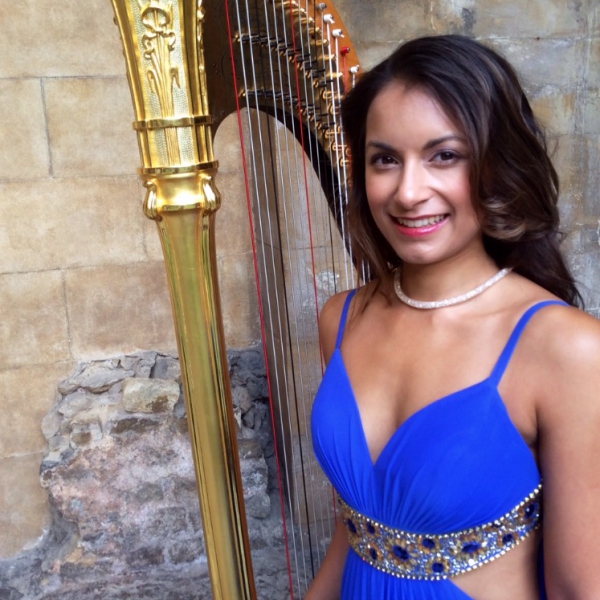 Having performed for many prestigious clients from Buckingham Palace for the Queen’s Coronation Festival, to Dolce & Gabbana; Melissa is a versatile musician who encompasses Classical & Contemporary music, through to Bollywood. Whatever your event, Melissa will add a touch of magic & enchantment that will be remembered by all!

Price from £410 + travel based on 1 person performing up to 1.5 hours of background music

“Lovely background music that set the atmosphere... We would definitely recommend her to anyone”

Film Themes/ Musicals
Theme from La La Land
Game of Thrones
Braveheart – For The Love of a Princess
Cavatina from ‘The Deer Hunter'
Claudia's Theme
Don’t Cry For Me Argentina
James Bond - Skyfall
My Heart will go on from ‘Titanic’
Moon River from ‘Breakfast at Tiffanys’
Over the Rainbow from ‘The Wizard of Oz’
Les Miserables
Ludovico Einaudi – I Giorni
Phantom of the Opera
West Side Story – One Hand, One Heart
Godfather theme

Contemporary
Adele – Someone Like You, Skyfall, Make You Feel My Love, When We Were Young
Alan Walker - Faded
Aerosmith – I Don’t Wanna Miss a Thing
All 4 One – I Swear
Backstreet Boys - Quit Playing Games
Bastille - Pompeii
Beach Boys – God Only Knows
Beatles – Here Comes the Sun, All You Need Is Love, In My Life, Let It Be, Norwegian Wood, Imagine
Ben E. King – Stand By Me
Beyonce - Halo
Birdy – Skinny Love
Bitter Sweet Symphony
Breakfast at Tiffany’s
Bruno Mars – Just the Way You Are, Marry You
Bryan Adams – Everything I Do, I Do It For You
Celine Dion – Titanic
The Chainsmokers – Don’t Let Me Down
Christina Perri - A Thousand Years
Coldplay – Viva La Vida, Clocks, A Sky Full of Stars, Paradise, Hymn for the Weekend
David Guetta - Titanium
Ed Sheeran – Shape of You, Thinking Out Loud, Photograph, Perfect
The Eagles – Hotel California
Ellie Goulding – Burn, Love Me Like You Do
Elton John – Can You Feel the Love Tonight
Elvis Presley – Can’t Help Falling in Love
Eric Clapton – Tears In Heaven, Wonderful Tonight
Iron Maiden – Fear Of The Dark
James Arthur – Say You Won’t Let Go
Jason Mraz – I Won’t Give Up
Joane Osbourne - One of Us
John Legend – All of Me, You and I
Kygo – Firestone
Lady Gaga – Bad Romance
Lana del Rey – Summertime Sadness, Video Games, Once Upon A Dream
Led Zeppelin – Stairway to Heaven
Lionel Richie – Endless Love
Luther Vandross – Dance With My Father, Here and Now
Mad World – Gary Jules
Metallica – Nothing Else Matters, Fade to Black
Michael Jackson – Heal the World, Ben
Madonna - Take a Bow
One Republic – Counting Stars, Apologize
Owl City - Fireflies
Passenger – Let Her Go
Pink – What About Us
Phil Collins – Another Day in Paradise, Do you Remember, A groovy Kind of Love, Everyday
Rihanna - Diamonds
Robbie Williams – Angels, She’s The One
Rod Stewart – Have I Told You Lately that I love You
Sam Smith – Writings On The Wall, Stay With Me
Savage Garden – I knew I loved you
Sia – Elastic Heart
Simply Red – For Your Babies
Stevie Wonder – Isn’t She Lovely
Sting – Fields of Gold, Every Breath You Take, An Englishman in New York
Taylor Swift – I Don’t Wanna Live Forever
Train – Hey Soul Sister, Marry me
Vanessa Williams – Save the Best for Last
The Verve – Bitter Sweet Symphony
Whitney Houston – Always Love You
Wiz Khalifa – See You Again

Disney
Aladdin – I Can Show You the World
Aristocats – Everybody Wants To Be A Cat
Cinderella – So This is Love
Theme from ‘Frozen’
‘Married Life’ from Up
Beauty and the Beast – Be Our Guest, Tale as Old as Time
Snow White - Someday My Prince Will Come
The Lion King - Can You Feel the Love Tonight
Pocahontas – Colours of the Wind
Once Upon A Dream
Shrek - Hallelujah
Pinocchio- When You Wish Upon a Star
Moanna
Cinderella - So This Is Love, A Dream is a Wish Your Heart Makes

Lovely background music that set the atmosphere... We would definitely recommend...

“We had booked Melissa from 4.30pm to midnight, so she was playing for many hours. She was there on time, she looked stunning and was very smiley, but most of all she played beautiful harp music for the whole of our wedding party. We had asked if she could play a Danish piece of music during the ceremony. We sent her a YouTube clip, and she played it perfectly on the day. One of our guest also had a very special request for a Danish piece of music during the evening, and she also managed to play that without knowing it beforehand. We have had many comments from our guests who all very much enjoyed the music. It was lovely background music that set the atmosphere without being too loud so that guests couldn't speak to each other. We would definitely recommend her to anyone.”

Melissa was everything we had hoped for on our special day.

“Can I say a huge thank you for the professional service. Melissa was everything we had hoped for on our special day. Our wedding guests were all full of compliments for the wonderful performance and walking down the aisle to the beautiful music was very emotional for everyone. There is nothing to fault with Melissa and could you please pass on our sincere thanks ”

Our staff and customers thoroughly enjoyed the music

“<p>Thank you so much for your wonderful performance on Friday night. Our staff and customers thoroughly enjoyed the music.</p>”

Thank you so much for your wonderful performance on Friday. Your music was the p...

“Thank you so much for your wonderful performance on Friday. Your music was the perfect backdrop to such a fabulous lunch. We were delighted that you were able to accommodate a special request enabling us to share happy memories with our wedding guests.”

It was a pleasure to have you at our wedding and I would definitely recommend yo...

“Dear Melissa,? ?I just wanted to say a massive thank you for your services at our wedding. You looked lovely in the green dress and all the guests were so amazed that you had Bollywood on your repertoire. Everyone said your music was truly music of the Gods! It was a pleasure to have you at our wedding and I would definitely recommend you to my friends, colleagues and family. Thank you again and all the best!”

Based on 1 person performing up to 1.5 hours of background music

Most Alive Network artists travel UK wide and internationally. Get a guide price instantly by clicking the 'get quote' button and entering your event date and location. Make an enquiry and we will liase directly with Melissa (Harpist) to confirm price, availability, and the provide you with a confirmed quote.

Up to 1.5 hours of background music

Up to 2.5 hours of background music

Drinks Reception Only (up to 1.5 hours)

Wedding Breakfast Only (up to 2.5 hours)

Wedding Ceremony and Drinks Reception (up to 2.5 hours)

Melissa is a versatile musician, who performs a range of genres from Classical, Contemporary through to Bollywood. From solo recitals, weddings to orchestral engagements, she has performed across the UK and Europe. Melissa has performed solo harp recitals at Buckingham Palace for the Queen’s Coronation Festival, Winchester Cathedral, the Victoria & Albert Museum, Lincoln’s Inn Fields, The National Gallery, and the Kammermusiksaal in Cologne, Germany. Other solo highlights include being invited to play for HRH Prince of Wales at the RCM President’s Visit.

Also an active orchestral musician, Melissa is regularly requested to perform with orchestras, under prominent conductors such as Bernard Haitink and Vladimir Jurowski. This has taken her performances to prestigious venues such at the Royal Festival Hall and St. John’s Smith Square.

Melissa completed the Master of Music in Performance under the tutelage of harp Professor Daphne Boden, at the Royal College of Music. Prior to this, she read Music at King’s College London, where she graduated with Honours and received the LRAM teaching diploma with Distinction. She was successful in spending part of her studies at the Hochschule für Musik und Tanz Köln with Professor Han-An Liu. Melissa has participated in masterclasses with world-renowned harpists including Marisa Robles, Isabelle Perrin, Elizabeth Fontan-Binoche, Karen Vaughan, Imogen Barford, and Eleanor Turner. She has also regularly taken part in summer courses, such as the Académie Internationale de Courcheval and the International Harp Summer School, where she won the John Sebastian Morley Prize. She was awarded a Distinction in the Premier Challenge Cup for Strings in the London Music Festival 2012.

Melissa has extensive experience performing at weddings and events, adding a special atmosphere to any occasion. She will customize your event with the music of your choice or can help to guide you through different genres of music from her extensive repertoire list. The harp is a versatile instrument and will add a touch of magic and enchantment that will be remembered by you and your guests.

After booking, speak directly with Melissa.