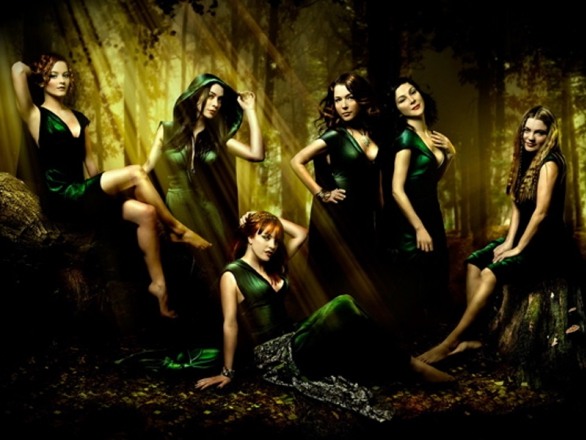 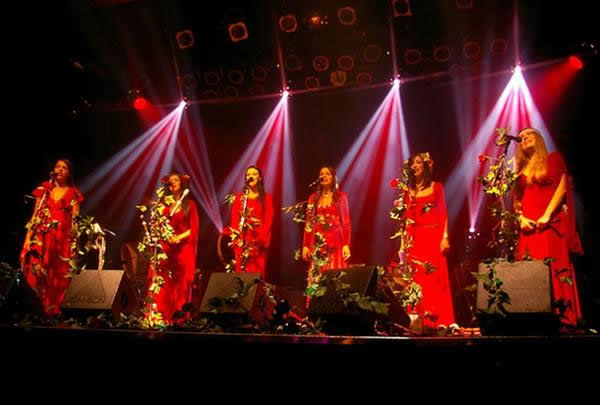 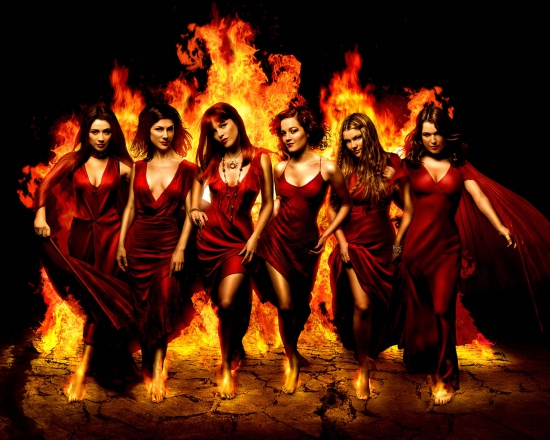 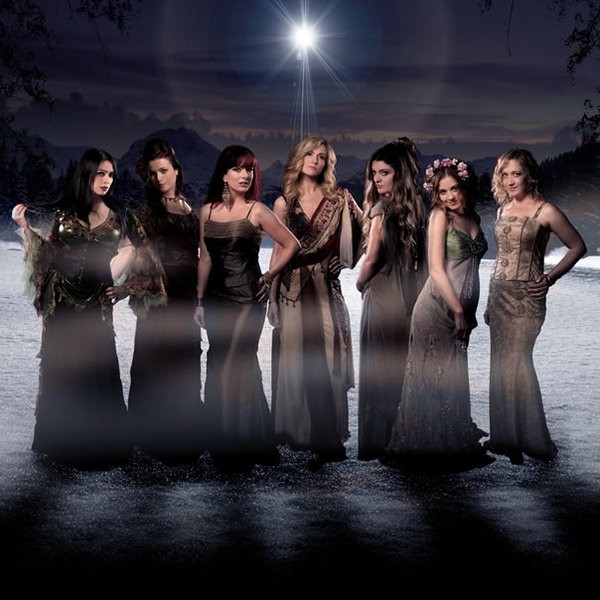 Repertoire - These are tracks from Mediaeval Baebes' Albums and some of which will feature in their act.

Most Alive Network artists travel UK wide and internationally. Get a guide price instantly by clicking the 'get quote' button and entering your event date and location. Make an enquiry and we will liase directly with Mediaeval Baebes to confirm price, availability, and the provide you with a confirmed quote.

Please to speak to your Alive Network booking agent for technical rider.

It is possible for the six singers to do a cappella shows for more low key settings.

“As close to heaven as you can get.” - The Express

“…a remarkable six piece.” The Times

The Mediaeval Baebes’ exquisite storybook opened its pages in 1996 when a group of friends broke into a North London cemetery and sang together clad in flowing white gowns and crowns of ivy.

Pulling lyrics from medieval texts and setting them to original scores using mediaeval and classical instruments, whilst singing in an impressive array of long forgotten languages; the Baebes offered a unique musical beauty and outstanding talent. Their choice of mediaeval texts were dramatic, obscure and dark in topic and remarked upon the inevitability of death, the pointlessness of material possessions, the horror of unrequited love or the dangers of imbibing too much alcohol. Some themes are timeless!

Twelve years later these fair maidens have placed three albums into the top of the classical charts and performed before enthusiastic audiences in the UK, United States, Canada and Europe in venues ranging from castles and caves to nightclubs and Renaissance Fayres. The Baebes’ contribution to the BBC production of The Virgin Queen (composed by Martin Phipps) resulted in a deserved Ivor Novello award 2007 for best television soundtrack.

Their most recent album ‘Illumination’ takes a fresher contemporary direction whilst retaining the ethereal beauty of the Baebes’ historical and musical influences. A tour of UK Cathedrals in the run up to Christmas 2008 culminated in the recording of a live DVD of their sell out show in the stunning setting of Gloucester Cathedral which has just been released.

The Mediaeval Baebes are:

Katharine Blake
Founding member Katharine Blake is also the musical director and lead composer and arranger for the Mediaeval Baebes. Born in London Katharine was classically trained at the Purcell School of Music and Richmond College. Katharine first came into the public eye as founding member lead singer songwriter and lyricist of avant garde gothic rock band Miranda Sex Garden releasing five studio albums and touring Europe and the USA with bands such as Hole Einsturzende Neubauten Depeche Mode and Nick Cave.
Katharine's other projects include a collaboration with Nick Marsh producing playing and singing on his album ‘A Universe Between Us’. Katherine has also performed with the experimental Jazz group Blowpipe and done numerous cabaret and Jazz performances over the years many of which have taken place at self hosted events.

Emily Ovenden
The daughter of infamous Ruralist artists Graham and Annie Ovenden Emily Alice grew up in a mock gothic castle in Cornwall and began writing ghost stories at an early age. In 2004 she published the short story Vulpes Vulpes a dark and seductive tale illustrated by her mother. Her first full length novel ‘The Ice Room’ will be published in November 2008 and expands upon the magic realism and gothic themes of her previous work. A talented soprano Emily joined the Mediaeval Baebes in 2002. She is also the composer and vocalist in the Cornish classical act Celtic Legend as well as the gothic power metal band Pythia. Emily has an unhealthy appetite for Finnish metal red wine M.R James graveyards, ginger blokes and beards and currently resides in north London, delighting in wantonness, excess and fantasy.

Bev Lee Harling
Bev Lee Harling has been described by her seaside loving family as a rudderless boat, and for good reason. Having first tried her hand at studying classical violin, she then switched to studying Jazz voice. Bev has toured with a jazz septet on viola and voice, played violin for an Argentinian Tango group, fiddled for a sweaty, fast playing Celtic band, led a roots band with a borrowed electric six string and a dodgy microphone, joined forces with Julian Hinton (her favourite composer/piano player) for a show at the Edinburgh Festival, learnt the guitar, become vegan, conducts a string orchestra, busked to earn money on the cobbled streets of George Street in her home town of Hastings with cult horror film goddess Emily Booth A.K.A Bouf. Bev writes and records her own songs and released her four track E.P Impossible Human in May 2006. Did we mention she’s also a Mediaeval Baebe?

Esther Dee
Born in Birmingham in 1979, Esther studied with the English National Opera, Baylis Programme, ‘The Knack’ with Mary King (Channel 4’s Operatunity judge) and Rufus Norris (Director, Cabaret West End). She has toured the world with Riverdance - the show and made it through to the final 4 contestants on Alan Titchmarsh’s ‘Search For A Soprano’ on ITV in the UK in September 2008. Esther is a qualified massage therapist and does Reiki Healing which is an often needed talent in the chaotic world of The Mediaeval Baebes.

Melpomeni Kermanidou
Melpomeni is the muse of tragedy in ancient Greek mythology. A drama queen. As her name sake The Baebes’ Melpomeni is just like her. An Australian with Greek parentage, she is a free spirit and walking psychodrama. If she could rub the genie's bottle, she'd like to have coffee with Bob Dylan, a session in the studio with Scott Walker and a bottle of red wine with Diamanda Galas. Melpomeni (or Pom as we call her) has shared a stage with Boy George in London for a celebration of Marc Bolan's birthday. As a solo artist she is working on her own album '9 Tragedies, 3 Love Songs and a Breakdown' which is an exploration of the darker side of paradise.

Sarah Kayte Foster
Sarah first took to the stage as a teenager in musicals such as West Side Story, My Fair Lady, and Grease. She went on to create lead parts in two musical premieres, as well as joining a gospel choir for two years, before relocating to London to train at Rose Bruford Drama School. Upon graduating she played theatre roles including Shelby in an off West End production of Steel Magnolias and Shakespeare's Juliet in a UK tour, as well as appearing in BBC and ITV dramas and numerous film projects – her most unusual job thus far has been squeaking for a living as an animated mouse!