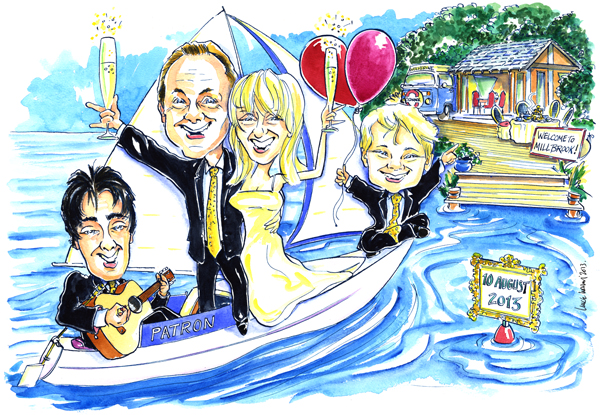 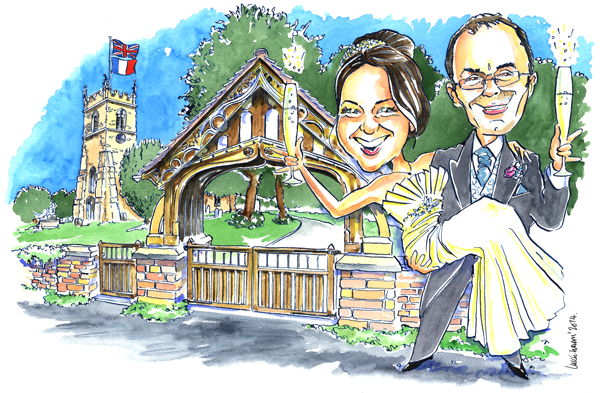 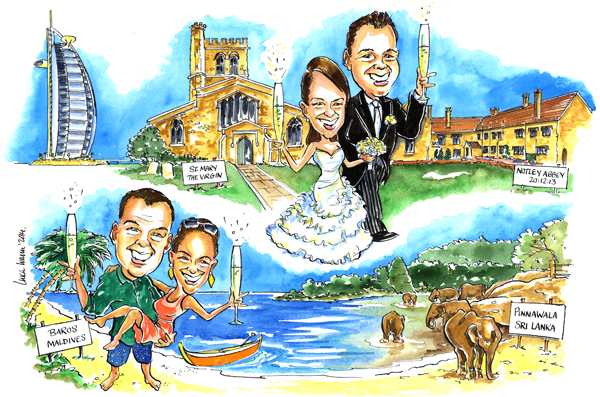 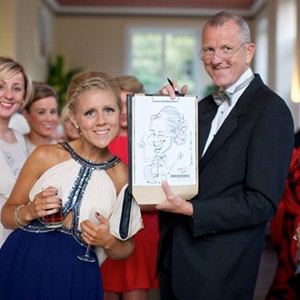 “I highly recommend caricatures by Mark. I sent some photos along with a note of some ideas to incorporate and I was not disappointed. The end result was better than I had hoped. Any queries I had were answered quickly and the caricature arrived in the far north of Scotland safely and in plenty of time, for a surprise present for my brother in law's 60th birthday from the family. Needless to say the caricature was well received and my brother in law was very touched with his gift. Don't go past Mark The Caricaturist for 100% service quality and professionalism.”

I have and would recommend Mark

“We asked Mark to create a caricature of our team as a retirement gift for our much loved Director. With just a few details regarding our hobbies he was able to create a truly unique souvenir which really captured the essence of our team. Turn around time was less than two weeks which was really impressive. I have and would recommend Mark to friends, family and colleagues.”

I spoke with Mark with regards to doing a caricature for my husband's 50th birth...

“I spoke with Mark with regards to doing a caricature for my husband's 50th birthday. The description I gave him was: He served 22 years in the British Army, he loves the Steve McQueen motorbike replica, he works out of the country tax free so can only spend 91 days of the year in Country otherwise the Tax man will be after him, he loves Grand Designs and plans to do a 2nd big job on our new home and we have just bought a dog boarding kennels. Within a couple of Days Mark had completed the drawing and posted it out to me! The work and detail that has gone into the drawing is outstanding, Mark has captured the essence of the subject perfectly. I would recommend him to anyone who wishes to do a present with a difference, something totally unique to an individual and I am convinced nobody will be disappointed with the results.”

Mark did an amazing job on our caricature.

“Mark did an amazing job on our caricature for an email campaign. He got all our "looks" so we were very recognisable. I really appreciated that he used his creativity and vision to design the layout and background, which worked far better than my vague ideas. Also he was very responsive, turned the image around in a few days and made changes when we needed. It's brilliant - thank you, Mark!”

Great service and good research in to our subject.

“Mark pulled out all the stops to meet our ambitious deadline over the Xmas hols and he didn't disappoint. Great service and good research in to our subject to produce a great caricature.”

Most Alive Network artists travel UK wide and internationally. Get a guide price instantly by clicking the 'get quote' button and entering your event date and location. Make an enquiry and we will liase directly with Mark The Caricaturist to confirm price, availability, and the provide you with a confirmed quote.

Up to 2 hours performance

Mark the Caricaturist would expect to draw 20-25 people in a typical 2 hour booking.

Most of his bookings are for 2.5, 3 and 4 hours. Automatic quotes generated on this website are only approximate. Mark is always happy to provide a firm quote based on the details (date, location, start time and duration) of your actual event.  On summer Saturdays he often entertains at two separate event on the same day and for this reason offers his best rates for either afternoon 12-5pm or evening 7-11pm bookings.  He is always happy to discuss the various options of how he can best entertain on your day.

Highlights
* Award winning on the spot Caricaturist!
* Best Entertainment Award at the 2017 South West Wedding Awards and the 2011, 2010 and 2009 West Country Wedding Awards; Judges Choice Award in 2013.
* Over 25 years professional experience - has drawn thousands of caricatures!
* Has drawn on P&O Cruises in the Caribbean!
* Cartoon's published by The Financial Times, The Daily Telegraph, The Independent, The Evening Standard and many more! Has illustrated over 10 books.

Mark is an award winning Irish Cartoonist and Caricaturist who has worked professionally since 1992. After 11 years in London he moved to Devon in 2003 and now works all over the south west - even as far south west as the Caribbean for P&O Cruises!

As well as drawing caricatures, Mark's cartoons have been published regularly by the Financial Times, The Daily Telegraph, the Press Association, The Irish Times, The Sunday Business Post, The Evening Standard and many more. He's won awards from the Guardian newspaper and the Botswana Press Trust.

After booking, speak directly with Mark The Caricaturist.