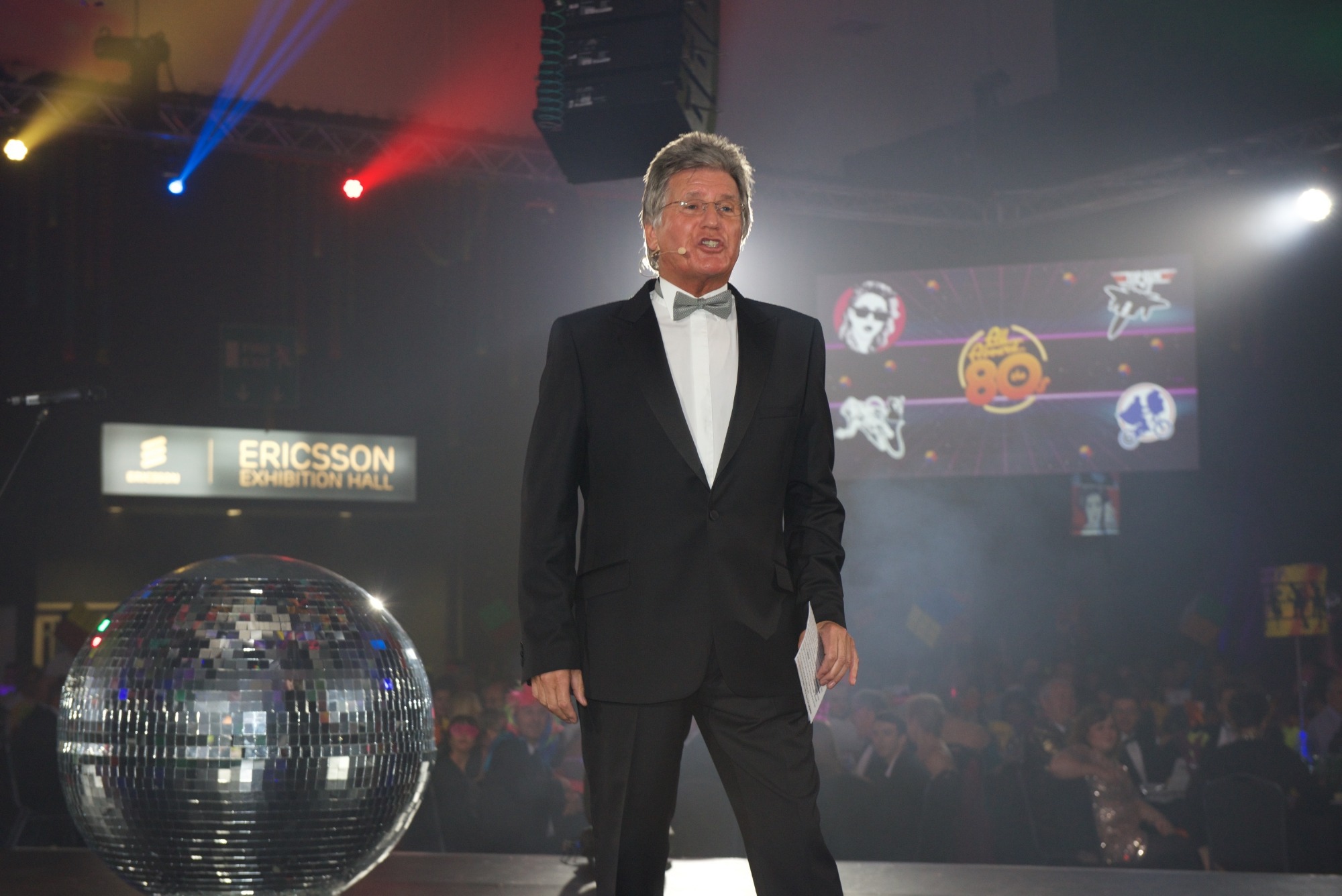 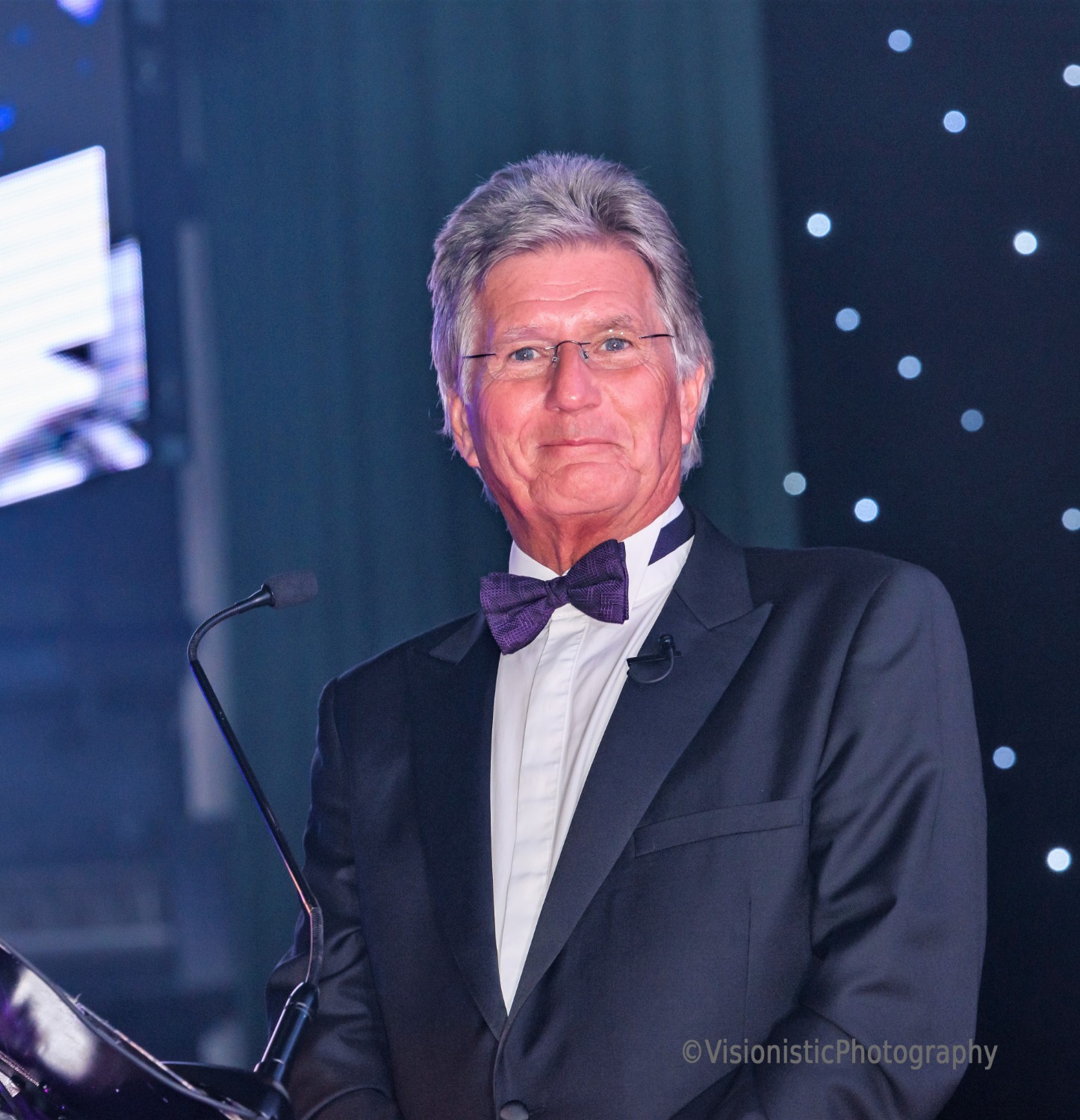 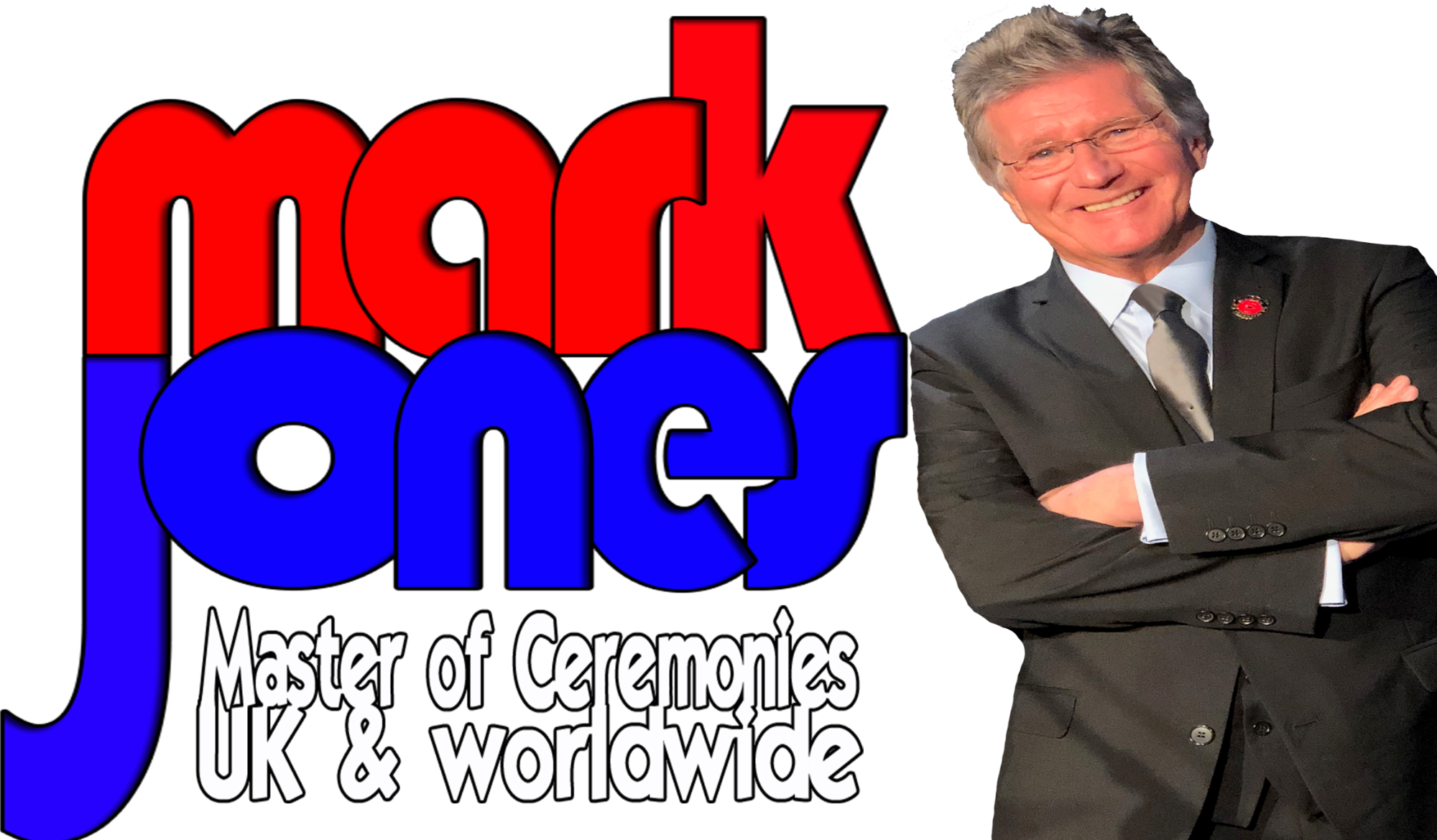 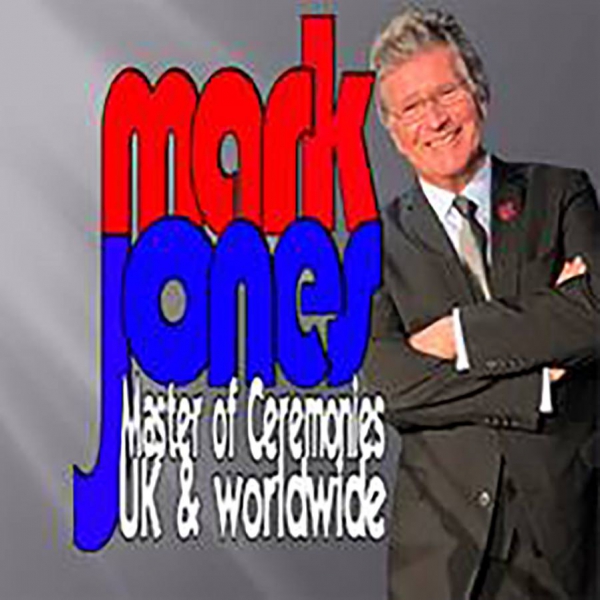 Award-winning Mark Jones has rubbed shoulders with (and introduced) all the stars! He has turned his hand -and his wonderful voice- to hosting countless events around the UK and worldwide. Mark is a warm, professional and entertaining Master of Ceremonies / Compere / Q&A Host / Auctioneer perfect for events where speakers need to be introduced / interviewed appropriately.

“He is simply the best. Thank you Mark”

He is simply the best. Thank you Mark

“Mark is a professional and very funny. He went down a storm at my daughters wedding. He kept the afternoon running to time, announcing the speeches and keeping everyone amused and smiling. He is simply the best. Thank you Mark.”

Worth every penny. Mark nailed it!

“Mark was the MC for our wedding. He sat on the top table as a guest and provided a highly entertaining commentary to our wedding breakfast. He arrived in good time to set up, was highly organised and rehearsed, and he was extremely funny, a true professional. He found the tone in the room very quickly and we never looked back. Absolutely fantastic. Top man! Thank you Mark”

Having been to quite a few of Mark’s various events he is clearly an experienced...

“Having been to quite a few of Mark’s various events he is clearly an experienced presenter and Master of Ceremonies. His quick thinking, wit and ability to handle an audience and any situation make him a great choice for any event. As an organiser you can rely on him to deliver in a highly professional manner, taking the pressure off you! I strongly recommend him. Good work.”

Mark has acted as Master of Ceremonies/Compere at our last few Monkey Award show...

“Mark has acted as Master of Ceremonies/Compere at our last few Monkey Award shows. I have found him to be personable, funny, entertaining and professional. More than that, he can work the room and keep the show running smoothly and on time. I would thoroughly recommend Mark to anyone looking for an professional compere for their event. ”

Mark created and delivered a great presentation throughout a VIP Awards Dinner i...

“Mark created and delivered a great presentation throughout a VIP Awards Dinner in September 2010. Can't say enough THANK YOUs for his brilliant support during a very challenging evening. Certainly look forward to working with Mark again - a true professional and an absolutely great guy. Above all, my client was also grateful and appreciative of my choice, so again, well done and a big THANK YOU. Best regards, Stuart Hopwood Lingua Franca International”

Price from £641 + travel from Merseyside

Most Alive Network artists travel UK wide and internationally. Get a guide price instantly by clicking the 'get quote' button and entering your event date and location. Make an enquiry and we will liase directly with Mark Jones (Master of Ceremonies) to confirm price, availability, and the provide you with a confirmed quote.

Mark hosts awards, sportsmen’s dinners and fundraisers around the world, plus live Sky Sports & ESPN programmes, fundraisers and more. In just one 12 month period, Mark appeared in Brunei, made 3 trips (coast to coast) across America, plus working trips to Malaysia, Portugal, Germany, Switzerland and Hungary; 41 flights and over 123,000 miles, whilst host eventsing in the UK.

Mark annually hosts Manchester United’s Player-of-the-Year awards, amongst others. He’s been MC for Sky Sports' Masters Football since 2001, hosting their televised tournaments across the UK, plus Dubai, Kuala Lumpur, Brunei and Macau, China. He presented the live TV interviews too.

In 2001, Mark was close (just four blocks away) from New York's Twin Towers during the 9/11 terror attacks. He spent the rest of the day as a Salvation Army volunteer helping the Emergency Services, and for the rest of the week, he also reported ‘live’ from Ground Zero for UK radio.

Mark Jones has unrivalled experience as one of the UK's top radio presenters, making his name at Liverpool's Radio City during their illustrious heyday, became an award-winner -with a Sony®- for hosting the 'Biggest Solo Concert In History' - Michael Jackson's Aintree racecourse concert- entertaing the crowd of over 125,000 all day. Mark was regularly voted ‘Presenter of the month' and received accolades from the Variety Club of GB, where he's a Barker.  Mark spread his experienced wings (and tonsils) featuring on American radio stations WEFT and Q-96 in Champaign, Illinois, where he also hosted the American Heart Association's black-tie fundraisers, helping to raise record-breaking amounts in the auctions. Not limiting his talents to radio, Mark has written and published several books.

For an awards dinner or business event to be memorable, scripts need to be prepared in advance and personalised.

Mark has vast experience of hosting (and scripting) these events, in the UK and worldwide; his scriptwriting adds personalised warmth to the evening.

**An additional fee will be incurred for the extra preparation (but worth every penny!) Please ask your agent for more details.

…They were a difficult crowd to please, you did an exceptional job! Well done! HRH Sophie, Countess of Wessex (at the official opening of Aquavale Leisure Complex, Aylesbury, Bucks.)

...we would like to thank you for a brilliant job last night, [hosting our golf day & awards 2015 at the Belfry] everyone thought you were the best MC we have ever had... Kathy McCracken, Admin. Manager, Road Surface Treatments Association

…You were a pleasure to work with and hopefully we will do it again soon. Alan Lambert, Carita Services, Potters Bar

...(2015) I thought Mark Jones was majestic in his handling and compèring the event. He kept everything moving in a most professional and competent manner; I can think of few other hosts who could have handled the event in such a professional way and with the provision of such good sound and lighting (which Mark also supplied). Many other super-expensive high-profile presenters would have stumbled over some of the Sri-Lankan pronunciations and protocols required. Mark did not."
...(2016) Thank you for making the BRISLA awards such a success again! Next year’s event is November 14th 2017. Please reserve the date.
Zimar Sivardeen, President & Chairman, British Sri Lankan Association

…a massive thank you for everything you did last night. We raised over £8,000 which we are absolutely delighted with… from the feedback we have been receiving all day, everyone loved it. Vanessa Simmons, The Teenage Cancer Trust

…Thanks for a great job. I thought that your hosting of the entire Masters’ series was spot-on! Steve Black, Director, Masters Football (Mark hosted Sky Sports’ Masters Football, including their UK, Dubai, Malaysia, Brunei & China Tournaments)

…a big thank you for last night's performance; I think you judged the audience just right as always, and really made the evening special for everyone. [The sponsors] loved it …and that's the main thing…! Karen Brindley, Managing Director, Krowne Communications (UK) Ltd.

…Thank you for doing a great job, the awards were a huge success. How you managed to keep us on time still amazes us! Mark Duggan, Managing Director, The Pallet Network

…I just wanted to say a big thank you again... you did a great job and went down really well (again!) People were queuing up to sing your praises at the end of the evening. Chas Banks, Event Organiser, Manchester United Disabled Supporters’ Association

…A very big thank you for all for your hard work at [the 2015 Highways Electrical Association awards at Celtic Manor]. You handled your duties beautifully -and kept to the script– ha ha! It was an absolute pleasure working with you. A very enjoyable evening. We will most definitely think of you for future events. Maria Valentine, Managing Director, Yellow Fish Agency, Brighton

…You judged the tone of our awards evening exactly right. We’ve had a lot of positive feedback about your role as compère... Janette Bolton, Event Manager, Warrington Guardian Group

…I wanted to say a huge thank you. You were absolutely brilliant! You managed to keep it all together perfectly [hosting the Chamber of Commerce annual awards dinner] and were extremely professional. I would have no hesitation in recommending you... Mark Whittle, Events Manager, North & West Lancashire Chamber of Commerce

…Everybody thought you were great and I will be looking to use you next year to host all three of our awards presentations. John Honeyball, Managing Director, European Environmental Control plc, Southport

…It was a pleasure to work with you last night. The feedback from the awards has been fab and Twitter has been very busy with happy winners and finalists telling the world - so all good. I look forward to being your sidekick again in the future. Ruth Lloyd-Williams, Founder/Director, NetworkShe, The Women In Business Awards