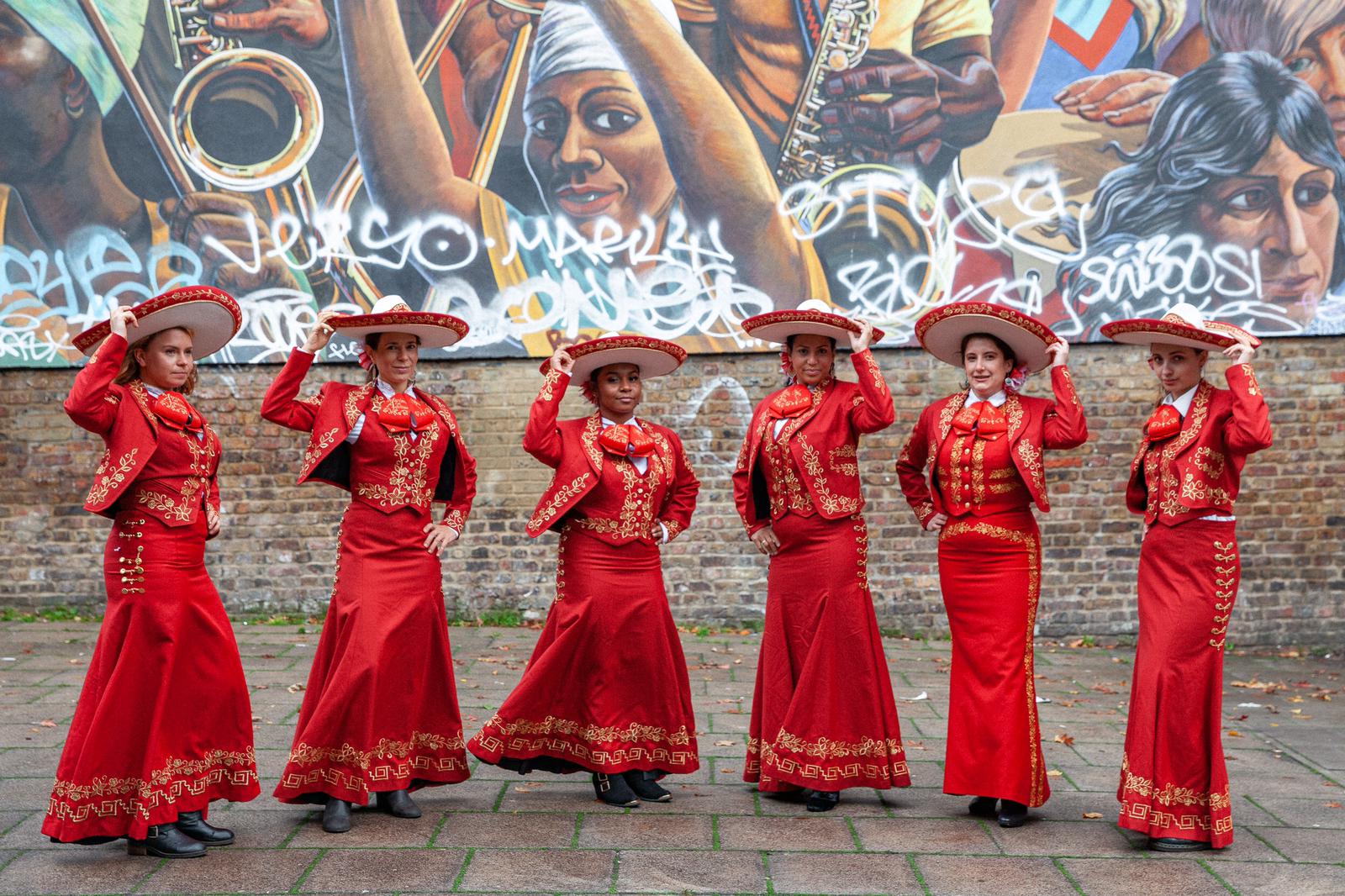 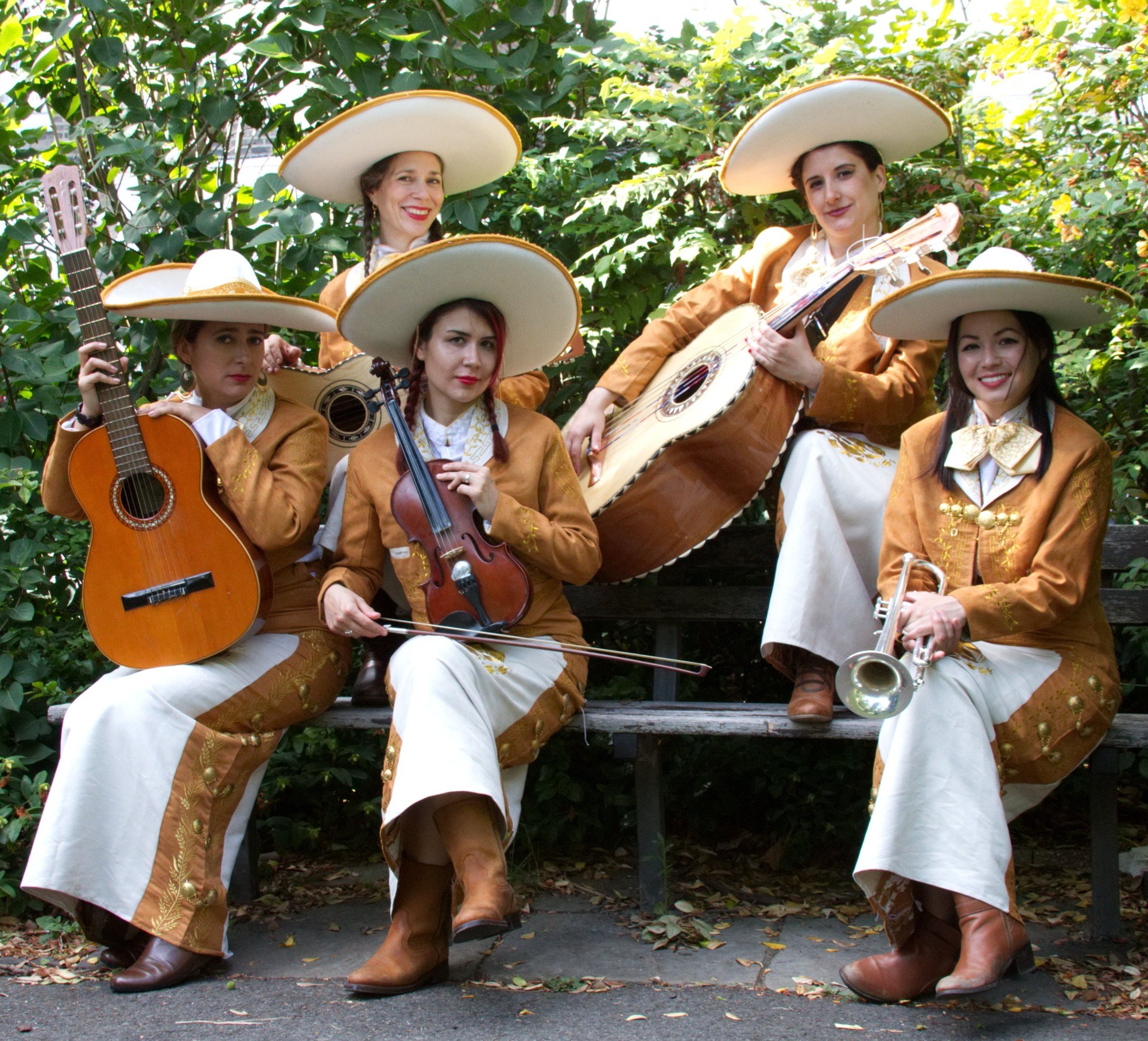 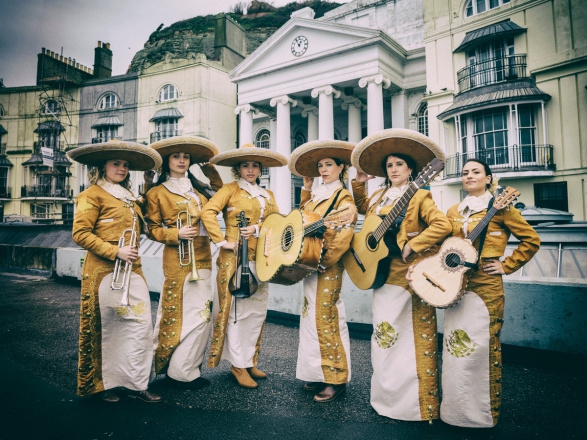 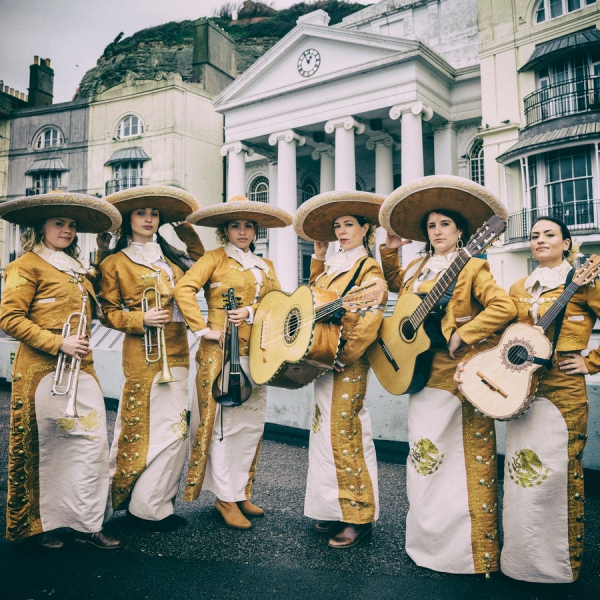 Hailing from all corners of Latin America, this unique band are the only all-female mariachi band in Europe! With tight vocal harmonies, incredible musicianship & years of experience, Mariachi Las Marietas have previously performed for Sophie Ellis-Bextor, the Mexican embassy, the V&A museum, IKEA, Disney & more!

“The most refreshing and enjoyable band I have seen in some time. Can't wait to see them again”

The most refreshing and enjoyable band I have seen in some time. Can't wait to s...

“We went to see them in Hastings after watching one Youtube video and they blew me (and everyone that saw them) away!! We followed them to three venues (in favour of other bands we'd gone to see) as the experience was too good to miss out on. The costumes, the charming introductions and the joie de vivre of their performances were all first class as were there choice of songs. I can't recommend them enough (even if you have no knowledge or interest in Mariachi) as they are the most refreshing and enjoyable band I have seen in some time. Can't wait to see them again. Steve, Brighton.”

Review from a Mexican

“Today I had the opportunity of listening to Mariachi Las Marietas at a Mexican event in London; it was such a complete pleasure to witness such wonderful talent! Their traditional clothing and whole image is absolutely beautiful. I would like to thank each one of the group members for bringing our Mexican culture to the UK and to such a great standard, you make us Mexicans very proud!”

From a community organisation

“Absolutely amazing!! We hired Mariachi Las Marietas for a Mexican Day of the Dead party and were totally blown away by the quality of the music and the talent of the musicians. They really made the party go with a swing, and played a really good mixture of fast songs that had the audience up and dancing, and some slower songs that gave people a chance to catch their breath. We wouldn't hesitate to recommend them, they brought so much joy to our party - more than happy to personally recommend if there's anyone out there in two minds about whether to book them, just contact us via thephoenixgarden.org and we'll give you any extra details you need. Totally brilliant and we just can't thank this wonderful band enough - we had so many comments from local families who attended the event and told us how much they enjoyed the music. It almost felt as though we'd got some old friends to come and perform for us. If you're thinking of music for your party we'd wholeheartedly recommend ...”

“The ladies were fantastic, they arrived and were very flexible with our changing plans and the costumes were amazing. the music was great and they acted very professionally throughout the evening. very unique to have an all female band and it works really well. I wouldn't hesitate to hire them again”

“Anita You and the band were wonderful on Sunday. You spread utter delight for an hour. And Harry, our middle son, was purring. Thank you.”

Most Alive Network artists travel UK wide and internationally. Get a guide price instantly by clicking the 'get quote' button and entering your event date and location. Make an enquiry and we will liase directly with Mariachi Las Marietas to confirm price, availability, and the provide you with a confirmed quote.

*Up to 7 piece available: Guitar, Vihuela (small Mexican percussive guitar), Guitarron (a very large Mexican bass guitar, played in octaves to double the volume of the sound), trumpets and violins.

Hailing from all corners of Latin America, this unique 7 piece band was formed out of the desire to step aside from stereotypes within this traditionally male dominated genre and are the only all-female mariachi band in Europe.

Not only is each member a fantastic instrumentalist in her own right, but there are no less than three lead vocalists in the group. Officially a 7 piece band, they are able to go as smaller outfits.

They have tight vocal harmonies and years of experience on their instruments and in the mariachi style, and also look great!

Available to play serenades as per the Mexican tradition, as well as festivals, cultural events and absolutely any kind of celebration. All of the mariachi classics are included in their repertoire, with some beautiful arrangements of well-known songs including classics in English arranged in a mariachi style, which means the band really can tailor it’s repertoire to suit any occasion. They have 4 different styles of mariachi outfits made to measure in Mexico.

Previous clients include Salma Hayek, Sophie Ellis-Bextor, the Mexican embassy, the U.S Embassy, the British Museum, the V&A museum, IKEA, and Disney.
They have played in Mariachi festivals in Los Angeles and in Mexico, and played prestigious UK festivals such as Womad, Vamos, Victorious and many more.

Their first musical releases in 2020/2021 have had critical acclaim and been featured several times on BBC6 music, on the Tom Robinson show, Iggy Pop show, and the Cerys Matthews show where they were also interviewed in March 2021.