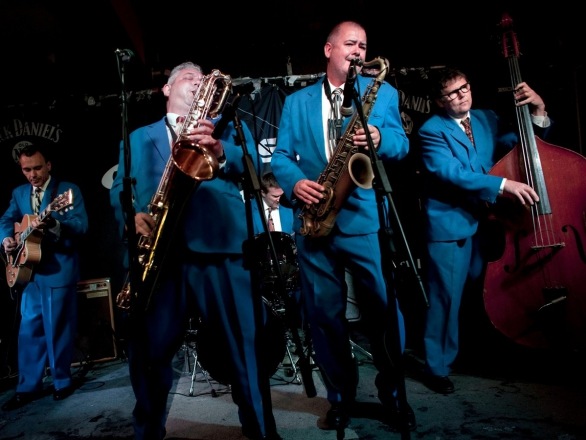 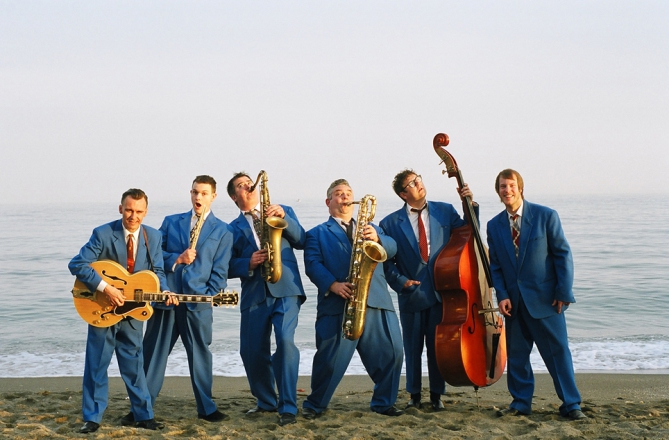 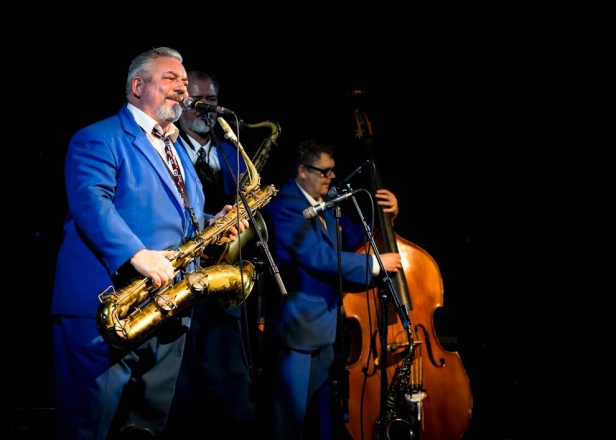 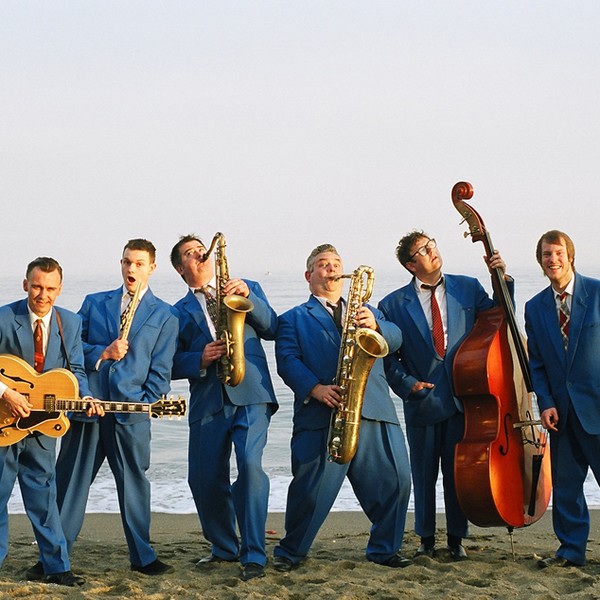 King Pleasure and the Biscuit Boys

King Pleasure! One of the most popular jazz & swing bands in the world, made famous by Ronnie Scotts clubs, performing classy numbers in Louis Jordan & Eddie Cleanhead style. A stunning range of instrumental ability, several recorded CDs, Midlands based.

“They more than exceeded our expectations and I think everyone commented how amazing they were and how much fun they had been.”

Includes songs from their 7 recorded albums plus:

They more than exceeded our expectations and I think everyone commented how amaz...

“Alive Network was professional throughout and I appreciated not having to chase anyone in the weeks leading up to the wedding. At the back of our minds was the idea that we would like King Pleasure to play at our wedding but thought that we would not be able to get them. Then I found them on Alive Network, but they were not in budget. However, we used Alive Network to compare others of the same price and those that were within budget and also talked to Gemma to make up our mind. In the end, we just had to have them as we used to go and see them play every time they played in London about 10 years or so ago. We were so glad that we did. They more than exceeded our expectations and I think everyone commented how amazing they were and how much fun they had been. All generations were up and dancing for the whole of the 2 x 60 minute sets. They were also great in agreeing to play our first dance and did not laugh at the quality of our dancing! The comedy aspect was also brilliant and photo...”

King Pleasure and The Biscuit Boys were fantastic. They were all at the venue, s...

“King Pleasure and The Biscuit Boys were fantastic. They were all at the venue, set up ready to go with time to spare. They appeared to work incredibly well together and the music hardly stopped for a moment and the dance floor was full all night. Together they provided a brilliant ecclectic mix of songs that were enjoyed by everyone. Thank you for the efficient manner in dealing with both bookings and please pass on our sincere thanks to the group for a fabulous night. Regards - Liz Ingham on behalf of Amy and Simon Midgley ”

Booking King Pleasure and the Biscuit Boys was so easy with Alive Network. Ever...

“Booking King Pleasure and the Biscuit Boys was so easy with Alive Network. Everything was straightforward and the service was excellent. I would like to say a big thank you. The band was brilliant and everyone thoroughly enjoyed themselves. ”

King Pleasure & the Biscuit Boys were a top class band who provided a fantastic ...

“King Pleasure & the Biscuit Boys were a top class band who provided a fantastic evening of entertainment and high quality musicianship for our festival followers. ”

Fantastic band and the pre event organisation ensured that there were no worries...

“Fantastic band and the pre event organisation ensured that there were no worries on the night. 10/10! ”

Most Alive Network artists travel UK wide and internationally. Get a guide price instantly by clicking the 'get quote' button and entering your event date and location. Make an enquiry and we will liase directly with King Pleasure and the Biscuit Boys to confirm price, availability, and the provide you with a confirmed quote.

2000 watts, suitable for up to 200 people, larger venues will need to provide own rig or hire via Alive Network

“The aristocrats of Rhythm & Blues" King Pleasure are one of the most popular jazz & swing bands in the world made famous by Ronnie Scotts clubs, performing classy numbers in Louis Jordan & Eddie Cleanhead style. They have a stunning range of instrumental ability, 7 recorded CDs and have performed internationally giving show-stealing performances with their unique mix of 1940s Kansas City Jazz and Blues, presented with the most exciting stage performance extant.

From humble beginnings as a group of school friends in a coffee shop in Walsall, King Pleasure have made themselves a household name in the UK and around the world with their fantastic jazz and blues rhythms, crazy on-stage antics, musical humour and total professionalism.

Unusually the original band-line up decided, over that infamous coffee, which of them was going to play what instrument. They then went out and bought the instruments and set about learning them! Originally known as Some like it Hot, they won competitions and began gigging in Birmingham, and over the ensuing 20 years have gone through several line-up and name changes, recorded 7 CDs and proved themselves to be the superb marketable band that they are today.

There is no denying the KP’s popularity, the polish and the ability to assault, involve and ultimately exhaust an audience, but, some would say, that doesn’t make them a good jazz band ... or even a jazz band. Well, the border between jazz and blues has plenty of traffic crossing it. It’s true that King Pleasure & The Biscuit Boys as warm-up band for the Modern Jazz Quartet would not be the most appropriate choice. It is also true that the crazy stage and zany visuals are still there (some purists find it difficult to take seriously a diminutive bass player who somehow plays the instrument wonderfully while taking it to two submissions or a knock-out), but humour, the wilder the better, has an honourable place in the story of jazz.

2. “Behind the fun and rollicking good times lies an outfit skilled enough to get four horns to come on with the bite and precision of The Count Basie Band. (The Guardian, December 30th 1995)

3. The unique mix of 1940s Kansas City Jazz and Blues is presented with the most exciting stage performance extant. Show-stealing performances of Jazz, Blues and even rock festivals are regular happenings. There are no barriers in the King Pleasure date book.

4. Their first five albums were all big-sellers and are still in demand. The sixth CD, Smack Dab In The Middle, was their biggest and best. Their US tour took in San Francisco, San Jose, Los Angeles, Phoenix Washington and culminated with four nights at Dan Aykroyd’s famous House Of Blues in Boston.

5. The band are veterans of more than 2000 live shows, 50 TV appearances in 7 countries and countless rave reviews. They are probably one of the most in-demand jazz/blues attractions in the world, regularly playing some 200 concerts a year.

6. They have their own fiercely loyal fan club - 4,000 members increasing daily. 56 of them chartered an aircraft from Birmingham to see the band at the Cork Jazz Festival.

7. They are bill toppers at jazz festivals in Glasgow, Edinburgh, Cork, Oslo, Hannover and Birmingham. They play major festivals in Germany, Holland, Belgium, Norway, Finland, Switzerland and Russia. They are the only band to be invited back to headline at Cork for a record 11th time.

8. “Easily the best Rhythm & Blues Band on the planet!”, (Blues and Rhythm magazine)

9. “The hardest act to follow since the parting of the Red Sea” (Paul Jones, BBC Radio 2)

10. “A respected R&B combo whose levity makes a welcome respite to the knit-brows ploughing the furrows of authenticity.” (The City Limits reviewer)

11. “Superb, a stunning range of instrumental ability ... classy stuff in the style of Louis Jordan and Eddie Cleanhead Vinson, with nowt taken out! A band I’d recommend ANYBODY to go and see.” (Dave Clarke, Now Dig This)

See more artists like King Pleasure and the Biscuit Boys

After booking, speak directly with King Pleasure and the Biscuit Boys.