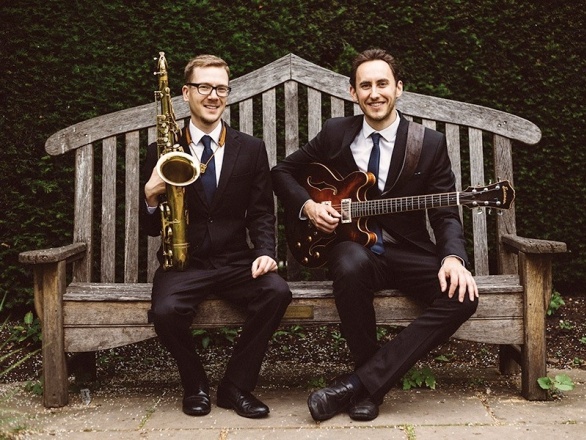 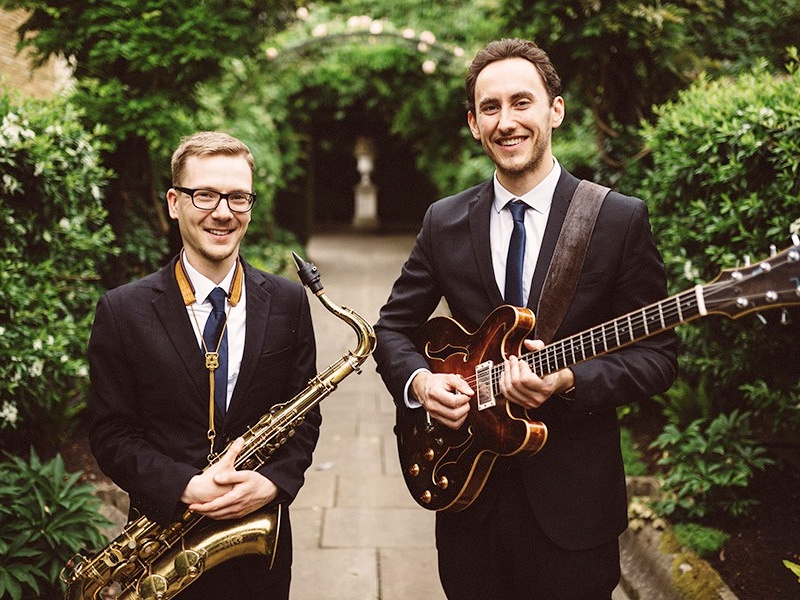 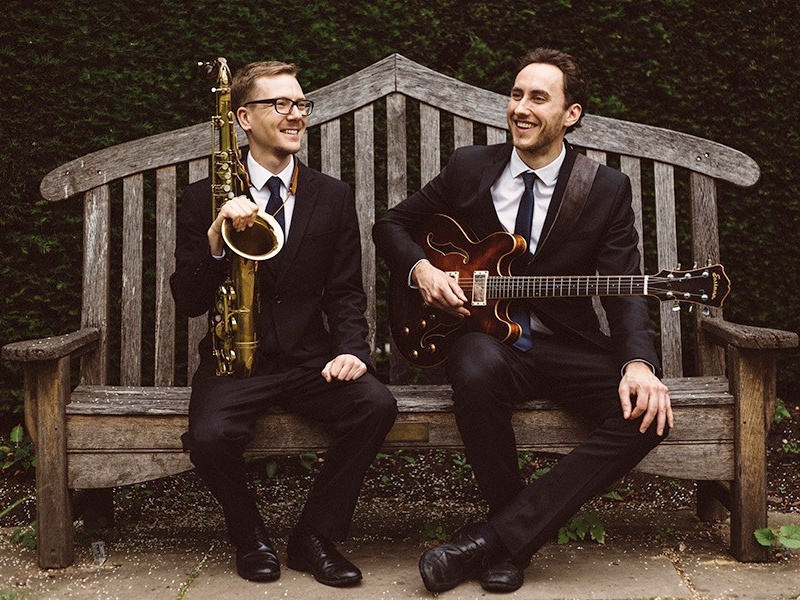 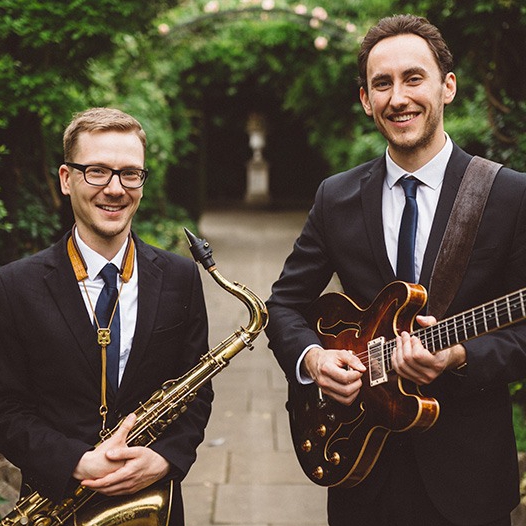 Kind of Two are a highly skilled and award-winning jazz duo who are guaranteed to lend a sophisticated soundtrack to any event, with experience performing for well-known clients such as Elton John, Lord and Lady Sainsbury and a private party hosting the Queen, as well as countless other events.

Kind Of Two - Available from AliveNetwork.com

Jazz and Swing Tunes
A Foggy Day
Ain't Misbehavin'
All Blues
All of Me
All the Things You Are
Alone Together
April in Paris
Autumn Leaves
But Not For Me
Bye Bye Blackbird
Days of Wine and Roses
Fly Me to the Moon
Have you met Miss Jones?
How Deep is the Ocean?
I Remember You
I’ll be Seeing You
If I Should Lose You
If I Were a Bell
It Could Happen to You
Just Friends
Like Someone in Love
Love For Sale
Night and Day
Polka Dots and Moonbeams
Skylark
Softly as in a Morning Sunrise
Someday my Prince will Come
St. Thomas
Stella by Starlight
Summertime
Take Five
Take the ‘A’ Train
Tea for Two
The Lady is a Tramp
The Song is You
There Will Never Be Another You
They Can’t Take That Away From Me
The Way You Look Tonight
Watermelon Man
What Is This Thing Called Love?
Willow Weep for Me
You Stepped out of a Dream

Ballads
‘Round Midnight
Body and Soul
But Beautiful
Cry me a River
Georgia on my Mind
I Fall in Love Too Easily
Lover Man
My Funny Valentine
Nancy (with the laughing face)
Star Dust
What’s New?
When Sunny Gets Blue
You Don’t Know What Love Is

“'Kind of Two' were brilliant throughout the whole process, professional and courteous in communication and played amazing at the wedding itself. It was a great accompaniment to our spring barn wedding. If you are thinking of booking a 2 piece band these guys are perfect and will not disappoint!! Thanks guys!”

Kind of Two created the perfect atmosphere for our event!

5 stars - Kind Of Two are Highly Recommended C/O: M booked Kind Of Two for their event in London • December 2021

“A huge thanks to Kind of Two for their amazing musical skills at our event. They were incredibly polite and professional over the course of the evening. They created an absolutely wonderful atmosphere for our guests, many who commented on how lovely it was to have Kind of Two playing. Everyone really enjoyed themselves - thanks so much!”

“Matt and Alex were truly the best duo to have at our wedding. The music was exactly what I was after and they were quite simply just so easy to book and work with. Matt called beforehand to run through the music a few weeks before the big day and we were able to add a few more modern pop songs outside of their typical setlist! I couldn't recommend them enough. I only wish they had a recording of their wedding music set list so that I could keep this with me to listen to in future years on our anniversary!”

“Kind of Two were absolutely fantastic from start to finish. So professional, great communication and even better music! All our guests commented on how classy they were and how perfectly in setting their style was with the vibe of our wedding. If you’re thinking about hiring these guys for your event, don’t hesitate - just do it! Thank you so much for helping our day to be so magical.”

The perfect accompaniment to our day

“Thank you so much for your performances at our wedding last weekend. We could hear your playing everywhere in the venue and it was the perfect accompaniment to our day. We really enjoyed your choice of tunes! ”

Most Alive Network artists travel UK wide and internationally. Get a guide price instantly by clicking the 'get quote' button and entering your event date and location. Make an enquiry and we will liase directly with Kind Of Two to confirm price, availability, and the provide you with a confirmed quote.

Roland AC- 60 acoustic guitar amplifier and Roland Cube amp with instrumental mic for saxophone if required (usually no amplification is necessary for the saxophone).

"This is sophisticated stuff... Everyone plays superbly and the whole set is wholly recommended." ***** Mark Gilbert, Jazz Journal

Kind of Two are a highly skilled & award-winning jazz duo based in London who are guaranteed to lend a sophisticated soundtrack to any event. Made up of two acclaimed and highly sought-after musicians, Kind of Two have appeared at the U.K. and Europe’s top jazz clubs such as Ronnie Scott’s, played at countless weddings and private parties and have also performed for well-known clients such as Elton John and Lord and Lady Sainsbury, as well as for a private party hosting HM The Queen Elizabeth II.

The Musicians
Originally hailing from the North Yorkshire Moors, London-based saxophonist and Dankworth Prize-winning composer Matt Anderson released his second critically-acclaimed album ‘Rambling’ in 2018. Based in Leeds for a time, Matt moved to London in 2015, studying at the Royal Academy of Music where he now coaches Junior Jazz ensembles. Becoming part of the fertile jazz scene in the capital, he has since performed with artists/bands such as the Gareth Lockrane and Calum Gourlay big bands, Jamie Doe, Hannes Riepler and Ivo Neame. In Leeds, he worked with many of the city’s top musicians/composers including Jamie Taylor, Jamil Sheriff, James Hamilton and Jiannis Pavlidis (in collaboration with Greg Hutchinson), and he has also toured in New Zealand, Eastern Europe and Scandinavia.

Guitarist Alex Munk graduated from the masters programme at London's Royal Academy of Music with Distinction in 2011, where he was awarded the Elton John Scholarship, the Scott Philbrick Jazz Scholarship and the John Baker Memorial Prize. Since then he has released two albums to critical acclaim, with glowing reviews in the likes of The Guardian, Guitarist magazine and Jazzwise magazine. His album-release tours were supported by Arts Council England and included performances at Ronnie Scott’s Jazz Club and Pizza Express Dean Street. His profile has grown steadily to the forefront of capital's jazz scene and he regularly performs in the bands of many highly regarded musicians and band leaders in London, as well as with the world-renowned CBSO.

Previous Clients/Venues
Kind of Two have been performing as professional musicians for many years and are heavily experienced in playing for all kinds of events. Among the many well-known corporate clients they have worked for are Warburtons, the NHS, HSBC, BT and the CBI, they have played at hundreds of weddings, private parties and dinners, and they have also performed for well-known clients such as Elton John and Lord and Lady Sainsbury, as well as for a private party hosting HM The Queen Elizabeth II. Both musicians have also performed across the world and they have appeared at many of the UK and Europe’s most well-known jazz clubs and festivals, such as London's Ronnie Scott’s and Pizza Express Dean Street jazz clubs, and Amsterdam’s Bimhuis.

Kind of Two are available in the following line-ups:
The duo and trio are well-suited for creating a sophisticated atmosphere and background ambience for your event:

Kind of Two Plus One: Tenor Saxophone, Guitar and Double-Bass or Female Vocalist

We also offer these larger ensembles for clients who would like a band which is more of the centre of attention at an event, for example giving a recital or playing music for dancing:

Flexibility
As well as the flexibility Kind of Two has in terms of changing location, space and power requirements, we are always careful to work out our clients' preferences in terms of dress code, timings and set lists, so that your event is just how you want it.

Please note that the duo's auto quote is based on 2x 45mins performance within a 2 hours period. The 2 hours does not include the set up time but if you want the performance spread across a longer period then extra charges will apply.

After booking, speak directly with Kind Of Two.