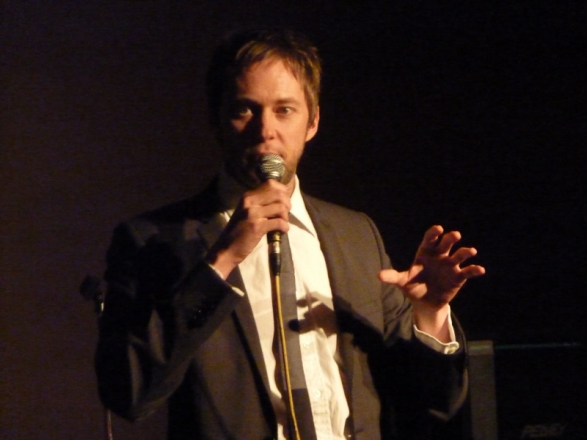 James Redmond is a dry, slick & subtle stand up who delivers unexpected twists & turns during his set as he deconstructs his art. Previous appearances include Never Mind The Buzzcocks, The Comedy Store, Celebrity Come Dine With Me & more.

“James gave a superb comedy performance, he managed the audience very well (despite some technical issues which meant he couldn't see us!) I was watching the audience and I saw and heard lots of laughter from the group throughout. Personally, I haven't laughed so much in ages! He was very professional, down to earth and easy to deal with. We would highly recommend him to others.”

His tales are quality stuff

“His tales of texting, girlfriends and Barry from Bristol are quality stuff.”

Most Alive Network artists travel UK wide and internationally. Get a guide price instantly by clicking the 'get quote' button and entering your event date and location. Make an enquiry and we will liase directly with James Redmond to confirm price, availability, and the provide you with a confirmed quote.

James Redmond is a dry, slick and subtle stand up who delivers unexpected twists and turns during his set as he deconstructs his art.

He made his name as a model and actor and is best known for seminal roles in ‘HOLLYOAKS’ (C4) and ‘CASUALTY’ (BBC1) and presenting ‘SM:TV’ & ‘CD:UK’ (ITV), alongside Cat Deeley.

He has appeared on ‘NEVER MIND THE BUZZCOCKS’ (BBC2), 'CELEBRITY COME DINE WITH ME' (C4) with fellow comedians Paul Foot & Joey Page, and is a regular guest and contributor on ‘SOCCER AM’ (Sky 1) & Radio 5 Live.

James performs 6 nights a week, all over the U.K. as compere, or with a set of up to 20 minutes and has done over 350 gigs in his first 2 years, including: The Comedy Store Conan O'Brien's 'The Tonight Show' Talent Search (as MC) Comedy Rush at The Shaftesbury Theatre Jongleurs, Camden Banana Cabaret Bracknell Comedy Cellar The 100 Club The BBC Club Spank! Amused Moose, Soho Rawhide, Liverpool The Funny Side & the comedy festivals of Bristol, Exeter, Guernsey, Hull & Liverpool.

He shared a daily, hour-long show at the 2010 Edinburgh Fringe Festival and has also played the university circuit and a range of clubs. In addition, he hosts the charity comedy club, ‘Laughing Stock’, in Hampstead, and has hosted charity events at Shoreditch House, Bristol Cathedral & the Indigo O2.