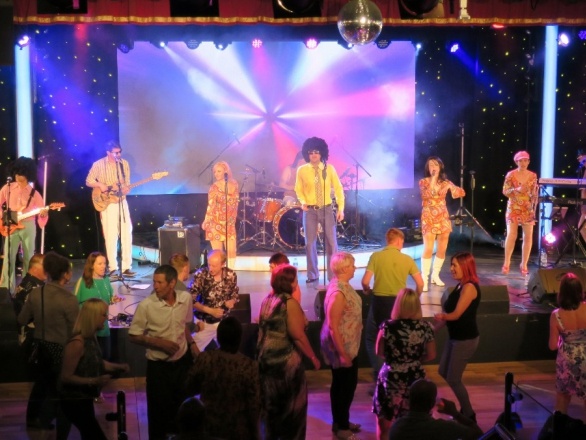 There may be a few 1970's bands on the professional circuit, but Disco Nights can rightly claim to be the most original! Their recent shows have included support slots for Robbie Williams and Culture Club!

“Fantastic! I knew they would be good from the reviews but the band were even better than I had hoped - what a great evening with all of the guests dancing all night, great sound and vocals! Thank you Disco Nights.”

The band were amazing!

“We had the best night the band were amazing we had so many comments on their performance.”

“Outstanding 7 piece band. Played for my wife's 60th. Danced all night till we dropped. Kevin is super organised and friendly. Musicians were top drawer. Hard to recommend more highly.”

If you need a party band, look no further!

“What can we say? We can't recommend them highly enough. People were telling us all night how brilliant you guys were. If you need a party band, look no further! These guys totally know what they are doing. Absolutely judge the mood and room perfectly got the crowd involved and had the dance floor full for 2 solid hours. None of this works if the band aren't up to it of course and these guys are so tight, slick and on the money. Great band, great vocals and a special mention to Kev for tailoring certain parts of the show to our needs, involving members of the family and learning our song for the night. Communication was easy and professionally dealt with throughout. Literally nothing but great things to say about this band, we absolutely loved our night. You were everything we hoped for and so much more. Can't thank you enough!”

so so pleased with what you all delivered

“Can I just thank you so much for the tremendous atmosphere, fun and above all music that the Band created for us yesterday. You were all amazing and you just made the evening so special for us. Jane loved everything, but particularly the ABBA set – just perfect for a lady whose favourite musical is Mamma Mia, I took her to see it on Tuesday evening again just to prepare her! I am so sorry that the timings were so messed up and our best laid plans went out of the window. Thank you all again, so so pleased with what you all delivered. With kindest regards”

Price from £1,859 + travel from Hertfordshire

Most Alive Network artists travel UK wide and internationally. Get a guide price instantly by clicking the 'get quote' button and entering your event date and location. Make an enquiry and we will liase directly with Disco Nights to confirm price, availability, and the provide you with a confirmed quote.

Add a female singer to the existing line-up

Add a male singer to the existing line-up

add a Trumpet player to the existing line-up

Add a Saxophone player to the existing line-up

The band will perform until 1am, charge applies for each hour after 12 o'clock

Two lots of 4 bright bulbs on each side of the stage with effects (total 4kW) plus other LED lights.

Payment of full fee 14 days in advance of the event

* Minimum of 4 plug sockets within easy reach of performance area.

* If required, an extra female singer can be added (essential for an Abba-lover as we can play a few songs in costume!); * A sax player (there's nothing like a sax solo to lift the roof....) * A full brass section of sax / trumpet / trombone for the most exciting disco sound you've ever heard * Disco Night's singer is also a professional DJ - he can play through the same PA system as the band, so he is great value as an option.

Do you long for the return of Saturday Night Fever? Disco Nights perform all the classic disco party songs the way they were meant to be heard and are guaranteed to produce party fever with their infectious energy-ridden performance.

The show is extremely tongue-in-cheek, and nobody is immune to the beat (which is not too fast.....not too slow.....just perfect for a good old disco boogie).

Disco Nights can rightly claim to be the most original 1970s disco band around - they have earnt a fantastic reputation on the live circuit with their superb tongue-in-cheek show. Be there or be square, daddy-o!

If Disco Night's DJ is not required, professionally mixed compilations can be supplied for background music when the band are not playing. Given enough notice a custom-made compilation can even be produced for each client!

- RECENT APPRAISALS -
"We thought you were very professional and great fun too. We can’t thank you enough for making it such a memorable evening, that we didn’t want to end."

"Everything went according to plan on the day and comments from family and friends on what a great time they had have been overwhelming, each with a special compliment to the band. The band added that something special to the day."

"Absolutely fantastic. First class. Have recommended to lots of people. Definitely use you again. Many thanks."

"It was so nice to see so many of our guests up dancing to the music - something that is always on the Bride and Bridgrooms mind I'm sure. It was a perfect end to a perfect day and for that we wanted to thank you."

"The band were brilliant, and everyone I spoke to really enjoyed the entertainment, so many thanks to you for arranging everything."