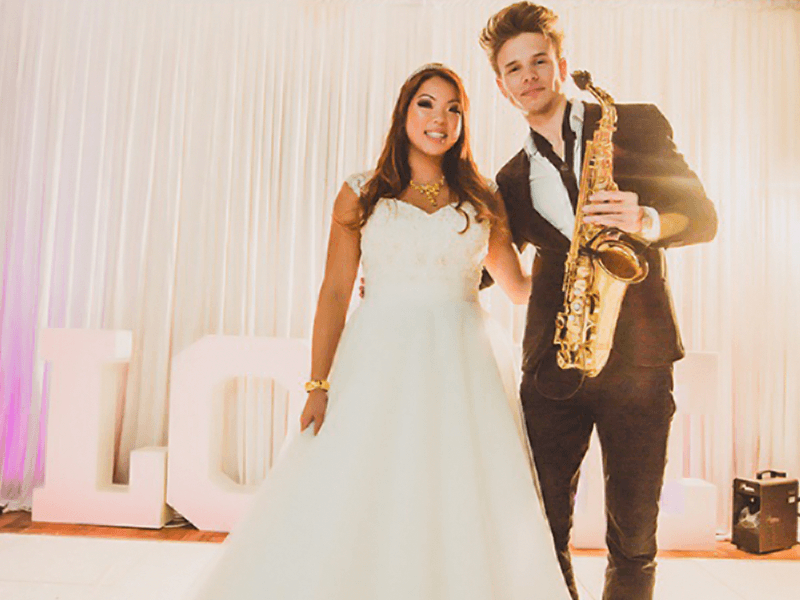 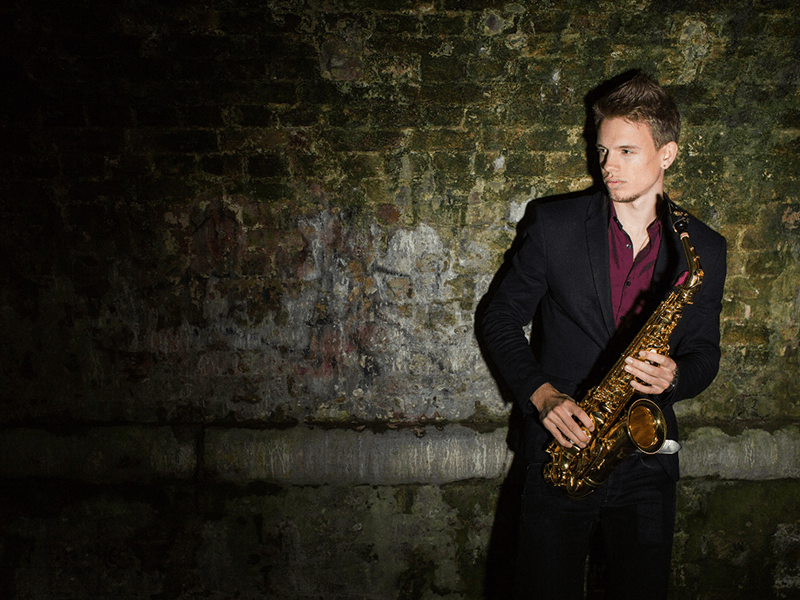 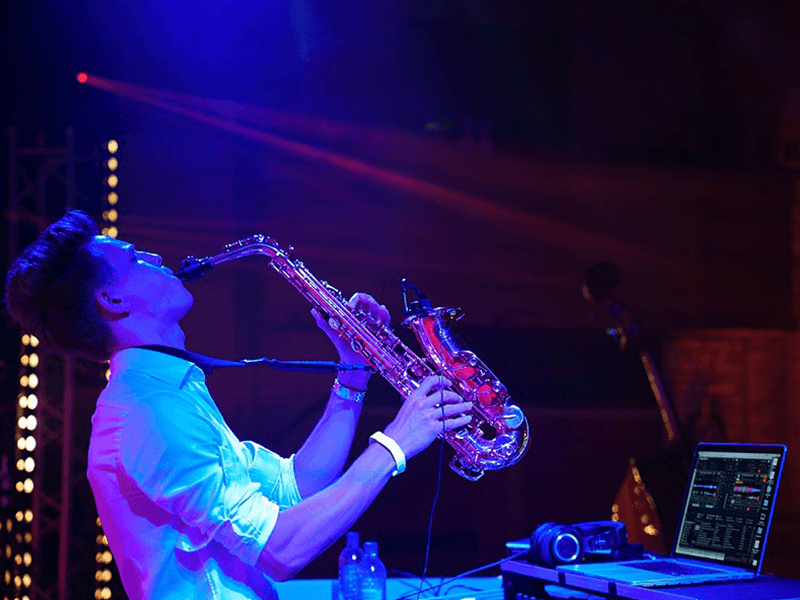 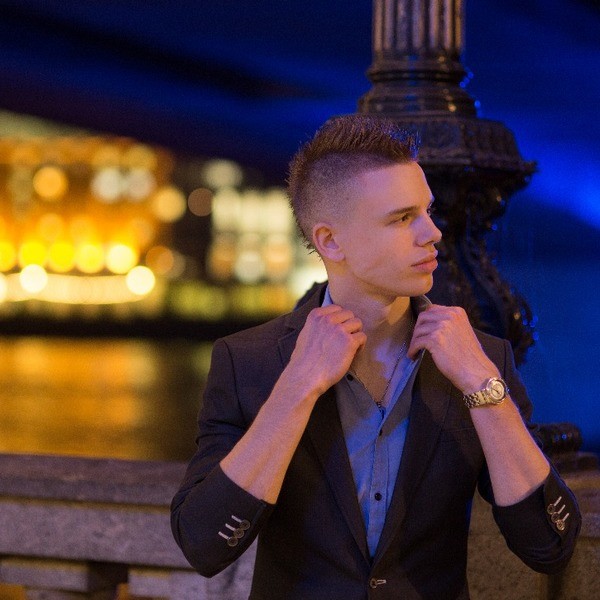 Dan is a professional, full-time saxophonist and DJ. The perfect choice for weddings, private parties and corporate functions, Dan is a highly talented, versatile and unique musician guaranteed to bring the party to any event. Performing at 150+ events worldwide each year, Dan's recent clients include celebrities such as Teddy Sheringham and Stooshe, big-name corporations such as the BBC and Channel 4, and the UK's finest venues including the Grove and the Carlton hotels.

“So many comments on how amazing he was”

So many comments on how amazing he was

“So so so many comments on how amazing he was. My husband didn't get off the dancefloor for 5 hours except to get a drink and my dad, he was just amazed, saying at 70 that was the best act he had seen ever! ”

DJ Goode is a true performer

“My wife and I hired Dan for our wedding in September. We couldn't have been any happier with his work. He catered to our specific music requests and made the evening of our wedding one to remember (Saxophone playing was AMAZING). He is a true performer and feedback from our guests were that they were equally impressed. I would happily recommend Dan to anyone looking to book him for a party or wedding. ”

“Dan, thank you so much for playing at our wedding in Wiltshire. We had a brilliant night listening to your music, you arrived and set up without any disturbance to our wedding breakfast and even offered to play some background music as you were ready early. The music played throughout the night suited our guests perfectly, great at reading the crowd. Also an amazing saxophone player, we had kept it quiet from most people so it was a brilliant surprise to them when you came down and started playing along to the music. Thoroughly enjoyed by everyone there. Really friendly and professional DJ we would recommend you to many of our friends!”

The music DJ Goode played was awesome, exactly what we wanted.

“Surpassed expectations. The music DJ Goode played was awesome, exactly what we wanted, and it kept everyone dancing for hours. And then the sax! That was just awesome. So many of our guests told us how much they enjoyed the music and how great the saxophone playing was”

Everyone is talking about the wedding and how amazing you were!

“Hi Dan, just to say a massive thank you for Saturday night!! Sorry we haven't been in touch sooner we are in the Maldives, Everyone is talking about the wedding and how amazing you were! Great job mate! Really made the night! Think you might be getting booked up for a few more weddings soon!! Thank you for playing another hour and thanks again mate, top night!”

Based on 1 person performing up to 5 hours

Most Alive Network artists travel UK wide and internationally. Get a guide price instantly by clicking the 'get quote' button and entering your event date and location. Make an enquiry and we will liase directly with DJ Goode to confirm price, availability, and the provide you with a confirmed quote.

"Dan is not only a talented Sax player and DJ but a true gent. His energy and professionalism coupled with the amazing playlists put together both on the Sax and for the DJ sets made for the most amazing party!!" - Liz Locke, The Apprentice UK

Having moved to London after recording his debut album at the renowned Chetham's School of Music, Dan Goode has rapidly become the UK's most sought after saxophonist/DJ. Within a year of moving to London he had already broken into the top end of the music scene in the city, and currently he performs at 150+ events each year at its biggest and most renowned venues, for celebrities as well as for big-name corporations.

Dan's recent clients include the BBC, Kiss FM and P&G, and recent venues include Ronnie Scott’s, the Hippodrome, the Landmark and the Grove. Dan has performed at many different locations across the UK and the world. In 2016, Dan has performed in Italy, Mallorca, France, Miami and Portugal for Teddy Sheringham & Krissy's wedding.

As an artist, Dan has amassed a fanbase of over 40,000 followers across social media platforms Facebook, Instagram, Twitter and Soundcloud. Dan's "All of Me" cover, released in 2015, has since become the most popular sax cover of the song on Soundcloud worldwide.

Dan has an extensive repertoire (100+ songs) and a keen ear, allowing him to play any style of music, with a playlist tailored to the audience and the event itself. His repertoire ranges from background (jazz/lounge/ballads) to upbeat pop music and he can also perform saxophone whilst DJing. Dan can provide the perfect range of entertainment for any event, starting with chilled background music and progressing to higher energy music as the night goes on. He is also happy to learn any requests from memory and never uses a music stand.

In addition to his saxophone playing, Dan can offer a complete, top-class DJ service with high-end moving head and laser lights, and a superb sound system which can cater for 500+ people. He can provide DJ sets in any style, from current dance music to old classics, as well as House, Deep/ Ibiza House, RnB, Hip Hop and Garage, with a song collection of over 20,000 songs. He also plays sax whilst DJing simultaneously and leaves the booth whilst playing his sax to dance with the crowd and amp up the energy. All Dan's equipment is fully PAT tested and he has public liability insurance up to £10,000,000.