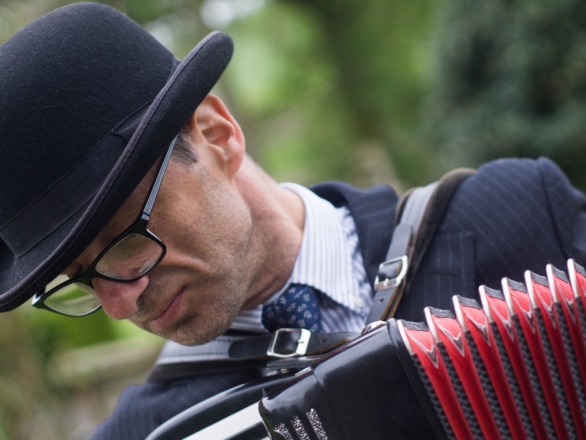 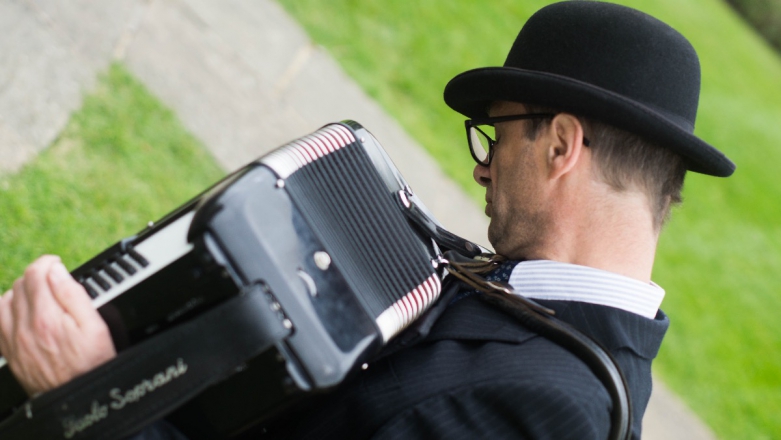 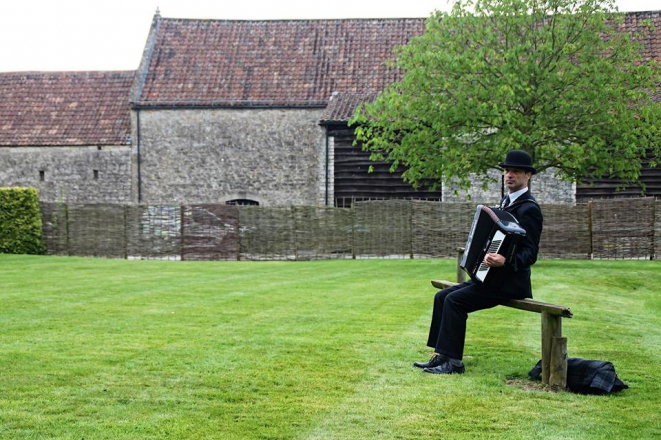 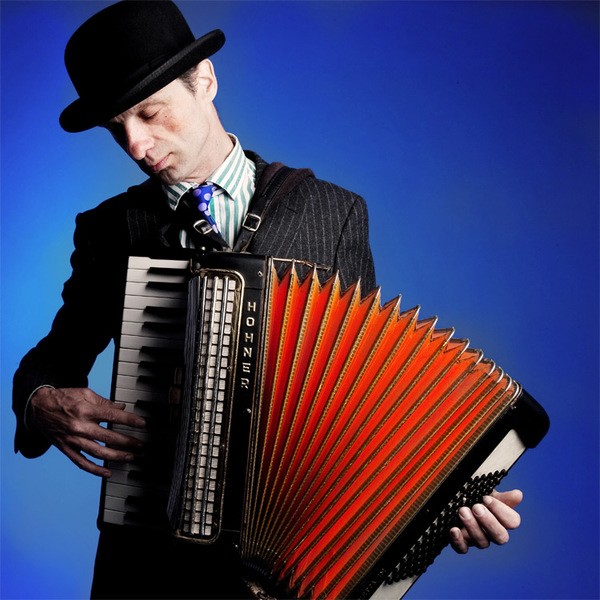 Accordion soloist Coeur Vagabond can play a full repertoire of Parisian Waltzes and Javas from the 1930's and 40's, popular Italian songs and tarantellas, Tango, Oompah Polkas, or eastern European and Klezmer tunes.

“Set the perfect ambience for an amazing afternoon”

Folk
A mix of English, Irish and Scottish dance music.

Set the perfect ambience for an amazing afternoon

“We left our wedding service with Coeur Vagabond playing Edith Piaf, La Foule whilst friends were literally exploding confetti over us - it was totally brilliant. He played beautiful music that was at the perfect level and just made a wonderful atmosphere for chatting and meeting people. Coeur Vagabond was immaculately dressed, friendly but very professional. We had spoken a few times over the phone before our wedding day to talk about the music and timings. After that he dealt with the venue directly and we didn't need to do anything on the day, he just got on with it.”

“We were happy to engage Coeur Vagabond for a private reception at the Royal Albert Hall in January 2018. On the night, Café Maestro was on time and looked great with his quirky style, which was perfect for our event. He played a one hour long set, as guests enjoyed a cocktail reception, however, was never intrusive. His choice of music and volume level were perfect for the area and setting. Many of our guests commented on his contribution to the evening and we will certainly welcome John Slater back to the Hall on another occasion. Thank you, Sian Cappucci Philanthropy Events Executive”

He was thoroughly professional and very accommodating.

“Coeur Vagabond performed at my daughter's wedding in September. He was thoroughly professional and very accommodating and we recommend him to others unhesitatingly!”

A great addition to our perfect day

“Coeur Vagabond was a great addition to our perfect day - he was well presented, on time and guests loved having some music for ambience. He was super friendly and fitted right in!”

Couer Vagabond was perfect for our event. His music really added to the atmosph...

“Couer Vagabond was perfect for our event. His music really added to the atmosphere without being obtrusive. He was really flexible and had a good sense of where to go at different times - moving to different locations as best fitted where most people were and what they were doing.”

Price from £259 + travel from Somerset

Based on 1 person performing up to 3 hours

Most Alive Network artists travel UK wide and internationally. Get a guide price instantly by clicking the 'get quote' button and entering your event date and location. Make an enquiry and we will liase directly with Coeur Vagabond to confirm price, availability, and the provide you with a confirmed quote.

For Coeur Vagabond to learn and perform a song at your wedding.

Accordion soloist Coeur Vagabond plays a mixture of musette, Oompah, tango, Italian and eastern European and klezmer tunes, and has been entertaining at weddings, garden fetes, birthday parties and corporate events for many years.

His musical training began at the tender age of 5, on the piano. Later in life, living on a small canal boat, he missed his piano, but found a battered old accordion at a stall in Halifax market. It set him on a long journey. After some years of teaching himself, he was taught by Yorkshire based Nigel Waterhouse, one of the finest accordionists in the UK.

The canal boat is now gone, as Coeur Vagabond has married and settled down in a house in Bristol. His little car gets him to gigs a lot faster than the little boat ever could.

His earliest repertoire was mainly klezmer, his tunes gleaned from an inspired collection of musicians, jewish fiddlers, accordionists and singers that met in a local Heptonstall pub. He took this music from town to town as he traveled the country, embellishing the tunes with his own improvisations.

Later, inspired by the golden age of musette from the 1930’s, he learned a large repertoire of tunes from such greats as Gus Viseur and Jo Privat, who played at the height of the bal musette scene in Paris.